Stop sharing this "Other Christmas Gift" video: There's nothing “uplifting” about telling low-income kids to give up their Christmas presents 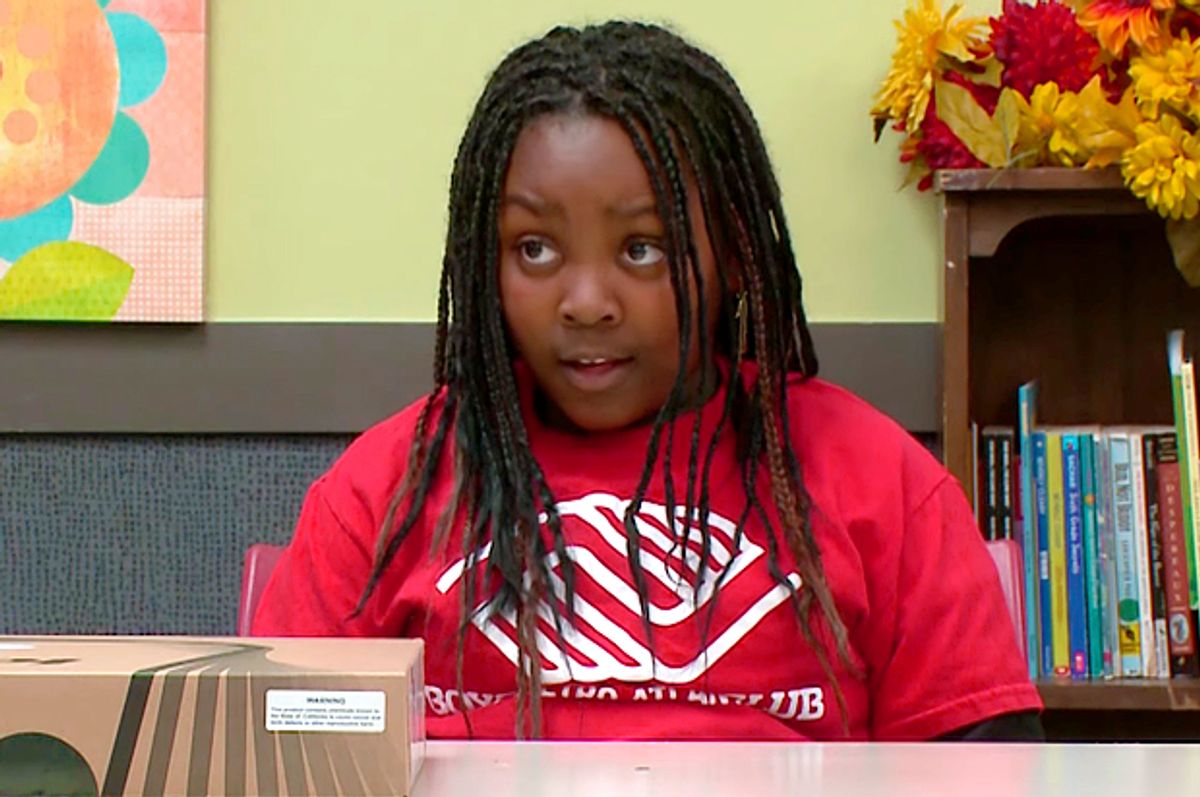 It’s the most wonderful time of the year: or is it? Up TV, which bills itself as “The uplifting entertainment network that features music and inspiring stories the whole family will enjoy,” has created a commercial intended specifically to pull on our heartstrings. Titled “The Other Christmas Gift,” it’s racked up an impressive 3 million-plus views in one week on YouTube.

The video opens with text telling us: “83% of Metro Atlanta Boys & Girls Clubs kids come from low-income families, some of which aren’t able to afford even a Christmas tree.” Then, a faceless male narrator ask some of these kids what they most want for Christmas—and then what their parents would want. Next we hear them being told, “The catch is that you can either get a gift for yourself or you can pick a gift for your mom and dad. I need you to pick one,” followed by predictably agonized expressions on the kids’ faces.

This video clearly has an agenda. “When faced with a tough decision, will these kids pick a Christmas gift for themselves or give it up for a gift for their family?” is the tagline UP has chosen on YouTube. They’ve also chosen to hire Rob Bliss as the video’s director, whose 2014 street harassment video for Hollaback! went viral and was accused of racism for omitting white male catcallers. According to TMZ, Bliss and Hollaback! were sued in July by the video’s star, Shoshanna Roberts, for $500,000 for “using her likeness to promote their agenda.”

In the Christmas gift video, we are meant to applaud the children who choose “correctly,” who say things like: “Legos don’t matter. Your family matters. Not Legos, not toys—your family. So it’s either family or Legos, and I choose family.”

We are meant to be overwhelmed with joy at the selflessness these children have chosen to show, and to not so subtly applaud the fact that UP tells them that because they chose the family gift, they will in fact be given both (to their credit, all the children interviewed were given both gifts, no matter what decision). In individual videos with some of the children posted on UP’s website, the copy reads: “Destiny has to make a tough choice… but her decision brings her to happy tears” and “Will Brooke give up an amazing art set she wanted so her mom can have a gift card? Get the tissues ready and watch her story.”

But ultimately this is hardly a positive lesson, tearjerker though it may be, nor is it some grand insight into children’s decision making processes. It’s an advertisement with a very pointed, clear message. As Becca Day-Preston wrote at The Debrief, where she called the video “Christmas poverty clickbait,” it’s cruel to impart such a choice on children in the name of exploiting their supposed kindheartedness. As Day-Preston put it, “…it doesn't matter that the kids got to keep both gifts in the end. In the second that they thought they wouldn't, when they were made to make a Santa's Choice, they would have felt a combination of emotions I wouldn't wish on anyone. All for the sake of going viral with a heartwarming tale of Christmas spirit.”

Bliss told Mlive, “It helped us challenge the notion that kids only think of themselves around the holidays.” Which raises the question: why shouldn’t kids think of themselves, at least in part, at the holidays? I’m not saying they should be selfish brats about their gifts, but these children are clearly as far from selfish brats as one can get. If UP was planning to give the children both gifts all along, why applaud them for posing this choice on the kids? Are we meant to assume that because these children are so poor, they should just be grateful for any gift at all, and that if they were to choose a gift for themselves, they’re being anything but children delighting in a holiday tradition enjoyed by their more well to do peers?

This reminds me of a similar lesson I heard imparted to children ages 2-6 at a Catholic school when I attended with a friend whose child was in attendance (although this wasn’t specifically tied to the holidays). The children were told that if they have multiple pieces of candy, they should share them (which I agree with). But then they were told that if they only have one piece of candy, they should give it away, because God would replenish their supply. It was meant to be a lesson in faith, which I’m pretty sure went way over the heads of those that young, but it was also lauding the same attitude UP is: that those who have less should never look out for themselves first.

At Vox, Dylan Matthews wrote, “The video is being presented as somehow uplifting, a grand testament to the power of selflessness. But preaching a gospel of self-sacrifice to those who already have next to nothing is cruel and perverse, and plays into centuries of demonization of poor people. While the children are expected to be selfless, the network's gift is anything but.” Exactly. This video is clearly making a judgment call about what choice these children should make, rather than examining its motives for conning poor kids into believing they have to make this tough choice.

Is there the kernel of a good idea in this video? Of course. We can all examine ways we can give to others, financially or otherwise, and be kinder this holiday season. But a viral video directed by a man known for manipulating the truth hardly seems the best way to remind us of that. The kids who chose gifts for themselves are just as deserving of a Merry Christmas as the ones who made the “selfless” choice. Want to really help those kids? Visit the Boys & Girls Clubs of Metro Atlanta’s website or make a donation—not strings or judgments attached.

The Other Christmas Gift Up Tv Viral Video