The Miss Universe truthers are out there: Steve Harvey conspiracy theories show how paranoid we've become

"I'm no conspiracy theorist, BUT" we still have trouble recognizing an honest, embarrassing mistake when we see one 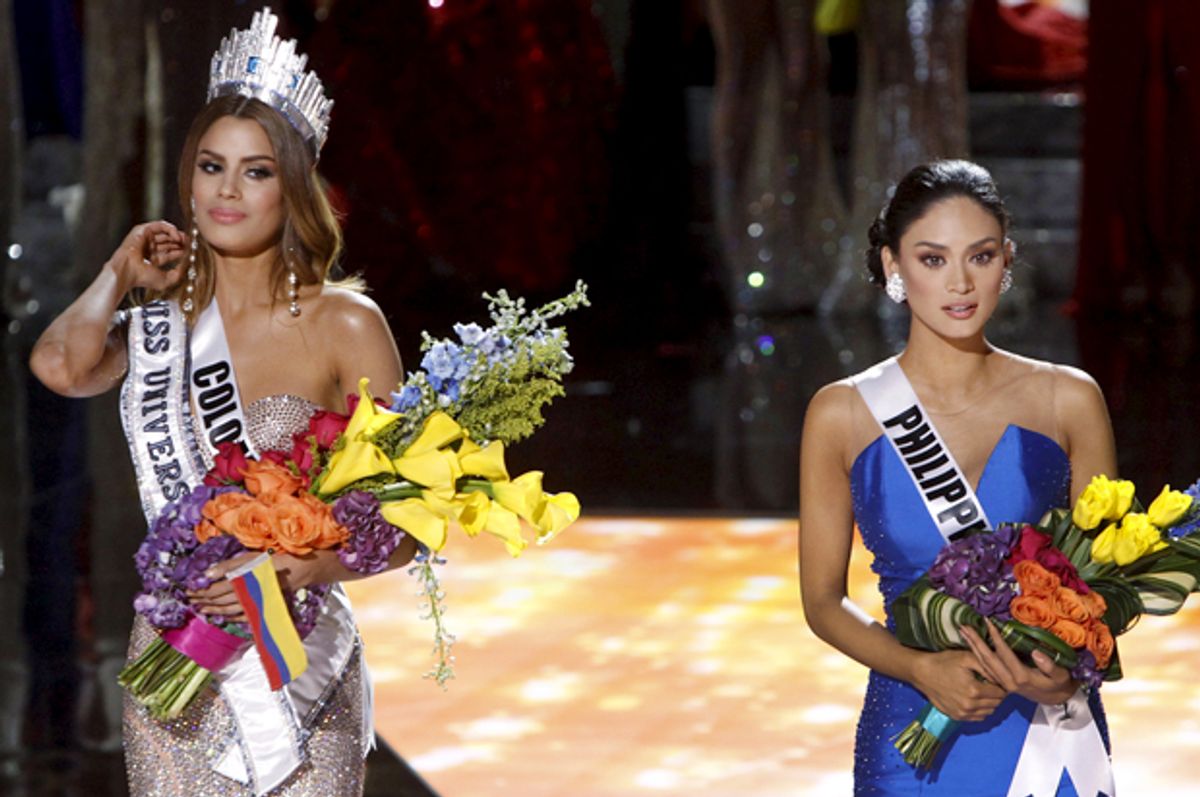 What started out weird has now gotten a bit weirder. When Steve Harvey announced that Miss Colombia Ariadna Gutierrez was the 2015 Miss Universe rather than Miss Philippines Pia Wurtzbach – the real winner – on Sunday, it became the biggest flub in the pageant’s history. It also seemed like, as Harvey insisted, an honest mistake. Harvey announced that Gutierrez was actually the first runner-up, and gave Wurtzbach the crown. He apologized, and that seemed like that might be that.

But over the next two days, the Truthers went to work: There is now a thriving social-media movement arguing that the mix-up was a publicity stunt.

"I generally don't buy into conspiracy theories,” Louisiana sportswriter Les East Tweeted, “but this is the most attention the Miss Universe pageant has gotten since, well, ever."

The speculation seems to alternate between thinking that the Miss Universe pageant needed the attention and that Harvey himself did.

Another line of speculation says the Teleprompter misled Harvey by naming Miss Colombia as the winner. “Steve Harvey took the blame for perhaps the most epic beauty pageant host blunder of all time on Sunday night’s Miss Universe 2015 Pageant, but some are pointing to a backstage Snapchat video as proof the mistake may have been someone else's,” Fox News suggested. “A seven-second behind-the-scenes video shows Harvey immediately after naming the wrong winner -- Miss Colombia instead of Miss Philippines -- pointing to a cue card and talking to an unidentified person saying: ‘The teleprompter said Miss Universe – Colombia.’ “ (The video has since been taken down.)

There’s even some speculation that Donald Trump might be behind it all, according to Britain’s Independent:

The Miss Universe franchise faced drama this year when US presidential candidate Donald Trump sold the pageant to WME/IMG. The beauty contest's former home, broadcaster NBC, cut all ties with Trump after his negative comments about immigrants, which also resulted in Univision dropping the pageant.

But some were convinced that Trump (even if he no longer owns the pageant) was still involved, somehow... because the story needs a villian. [sic]

These Truthers don’t appear to be as unhinged as those who insist that the Sandy Hook shootings were a hoax. But they seem to be overlooking something. For years we’ve been telling ourselves, “There’s no such thing as bad publicity.” But that’s not really so.

For example, don’t they understand that the show and its announcer need to maintain their credibility? Do Harvey and the pageant want people second-guessing every call they make?

Does Harvey – if this was his diabolical plan – really want people wondering if he’s gotten things right on every episode of “Family Feud”? Harvey may not be a star of the first order, but is this really the kind of publicity he’s looking for?

If the Miss Universe organization knows something, it’s not saying. After the mess, the group posted this: "The excitement of live TV was evident tonight on The Miss Universe stage with over 10 million live fan votes tabulated. Unfortunately, a live telecast means that human error can come into play. We witnessed that tonight when the wrong winner was initially announced. Our sincerest apologies to Miss Universe Colombia 2015, Ariadna Gutierrez-Arévalo, Miss Universe Philippines 2015, Pia Alonzo Wurtzbach, their families and fans."