Determined not to argue politics over Christmas dinner? Good luck. Science explains why family is a trigger 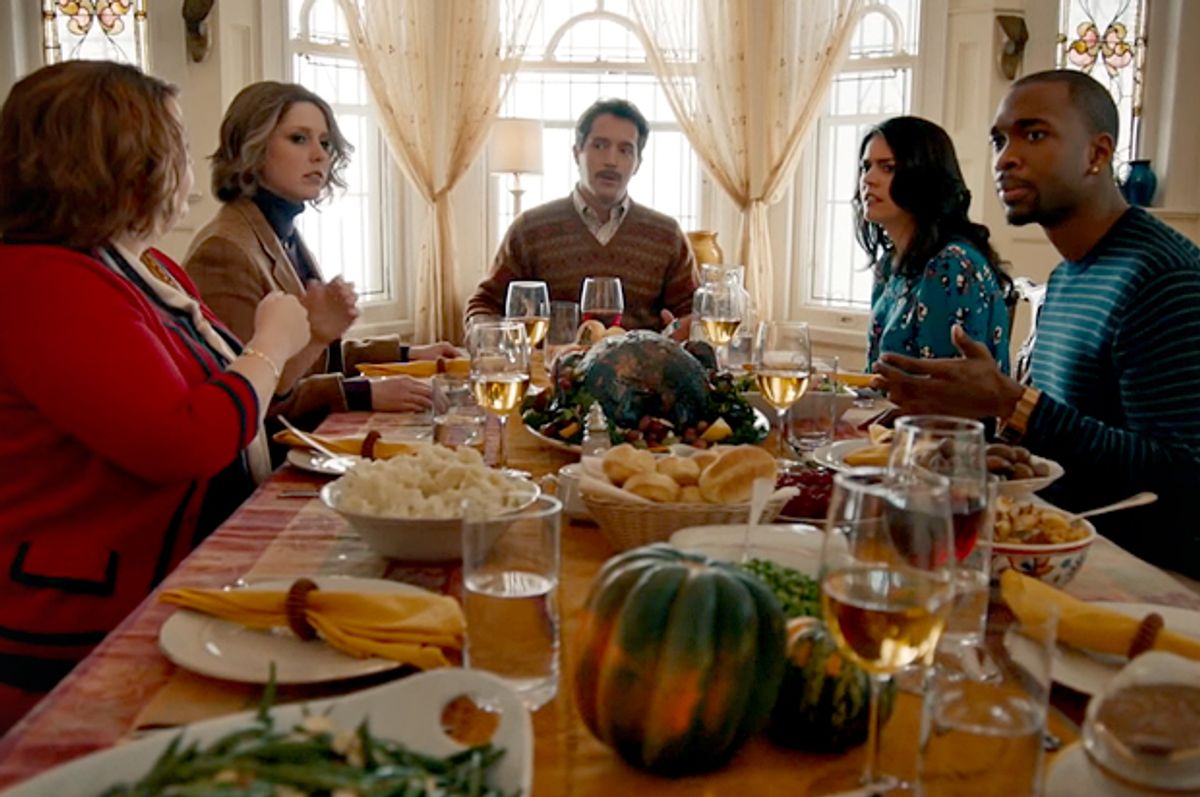 Ritual sacrifice: “To commemorate a past event, you kill and eat an animal. It’s a ritual sacrifice. With pie.” ~ Ayna from "Buffy the Vampire Slayer"

You’re seated for dinner, surrounded by grandparents, distant cousins, aunts and uncles with a large stuffed turkey sitting perfectly in the center of the table. As you work your way through your first serving you feel a growing anxiety. You’re waiting for the inevitable, the moment someone will say something that will bring everyone’s blood to a boil. You don’t want an argument, but you can feel the tension building. It’s going to happen, it does every year.

Finally (after a few rounds of drinks), your second cousin twice removed starts a sentence with “now this may not be the most popular thing to say,” and your skin starts to crawl as he manages to offend at least half the people at the table. Everyone goes quiet. The air is thick with anticipation as messages are passed with subtle eye contact. Everyone is holding their breath. You want nothing more than to stand up and vehemently dispute his statement, but you know this will do little good. At these holiday gatherings, even the most well formed and eloquent arguments will be dismissed with a wave of a hand and rebutted with a flippant “Well, I still know I’m right.” This pattern is just part of the yearly ritual. But regardless, something inside is pushing you, and you want to stand up …

This scenario is going to play itself out again and again across the nation as families sit down to holiday meals. Even before "SNL" made the Adele Hello Thanksgiving Miracle video, the holiday dinner table stood iconic as a political battlefield. Why? Well, it goes deeper than just the fact that half of your family is composed of liberal Democrats and the other half of conservative Republicans. In fact, this tension stems from the cultural rituals of our ancestors, and offers insight into the foundations of our contemporary social structure.

At the deepest level, these familiar heated holiday moments are rooted in our biological programming. Holiday traditions are full of emotional triggers that set in motion a whole host of physiological changes. The smell of peppermint, the sound of Bing Crosby’s "White Christmas," the feel of the ribbon against your fingers, the sight of your distant relative walking through the door, all of these cues are linked to strong emotional memories that prompt powerful changes in our body.

Our brains work in overdrive as we are immediately reminded of every previous holiday, and all the feelings associated with those memories come rushing to the forefront. Experiences that are rich with emotion are stored in greater detail than other memories, and for most, the holidays are a heavy mix of good and bad emotions. So even before the political battle stage is set, our bodies enter a primed, sensitized “high arousal” state, making every word land with the weight of emotion built up over years. But why are these times so emotionally charged?

From birth we are told that this time of year is one for celebration, reflection and coming together, even for the non-religious. It is a prime example of what Emile Durkheim, the grandfather of sociology, discussed as a necessary and essential time for ritual and revival. Some of these rituals involve lighthearted and joyful traditions, such as lighting the menorah, attending midnight Mass, caroling or partying. But, sooner or later, this fun is replaced by philosophizing, inspired by congregation around the table for the family meal.

Due to the symbolic nature of shared annual traditions, these rituals motivate us to take stock of ourselves and the values that shape our worldview. We critically think about who we are, who we want to be, and how we relate to those around us. This communal aspect of the holiday season further overwhelms our senses. Durkheim comments on this phenomenon, writing, “Sentiments created and developed in the group have a greater energy than purely individual sentiments.” Being together can inspire and rejuvenate an intense feeling of belonging, a sense of solidarity, and reinforce the belief that we are connected to a force greater than ourselves. Ideally in these moments, the ties that bind communities together are revealed and reinforced, subsequently providing us with a feeling of confidence and a sense of certainty in a world full of confusion.

This overwhelming sense of community sounds great. But in actuality, instead of strengthening our bonds with others by defining our similarities, we often end up defining and reinforcing our worldview by identifying (and arguing about) our differences. A critical part of these traditional social rituals involves not only a revival of what is good and held as important, but also a demonizing of what is wrong.

Naturally, this is where conflict and tension emerge, as the means of defining what is sacred or profane varies. To determine their morals, some use religion while others use science, still others use whatever their favorite celebrity told them is good or bad. These varied distinctions shape our worldview and undoubtedly surface during these rituals. With our bodies fueled by all kinds of different hormones and neurotransmitters, and quite probably alcohol, we feel moved. We want to celebrate and, yes, defend the very things we depend on to inform our identity. So when your cousin twice removed spouts something that cuts at the roots of your worldview, you want to stand up. He may be family, but he is not part of your collective.

And so even though you know you’re not likely to change anyone’s mind on religion or world politics at the dinner table (they’re just as drunk with a sense of revival as you are), you still stand up. Before you know it, you’re stating point by point every misinformed detail of your cousin’s argument. Because the argument is not about him at all. Instead, it’s about you, who you want to be, the values you carry, and your connection to a greater collective, regardless of the shape this takes.

When you argue with your cousin, you are no longer alone. Rather, you are fighting on behalf of your collective, and reasserting your moral and social principles. That’s why these yearly ritual battles feel so inevitable. But mixed in with the anxiety, tension and concern over what will be said and to just what degree it will offend, is also anticipation. Anticipation of the satisfying feeling that comes when you remember who you are and what you believe.