Holiday kitsch is killing us: I've had enough of these pageants of enforced feeling that leave us all empty

For a long time, I blamed myself for hating Christmas; now I see the pageant of enforced feeling for what it is 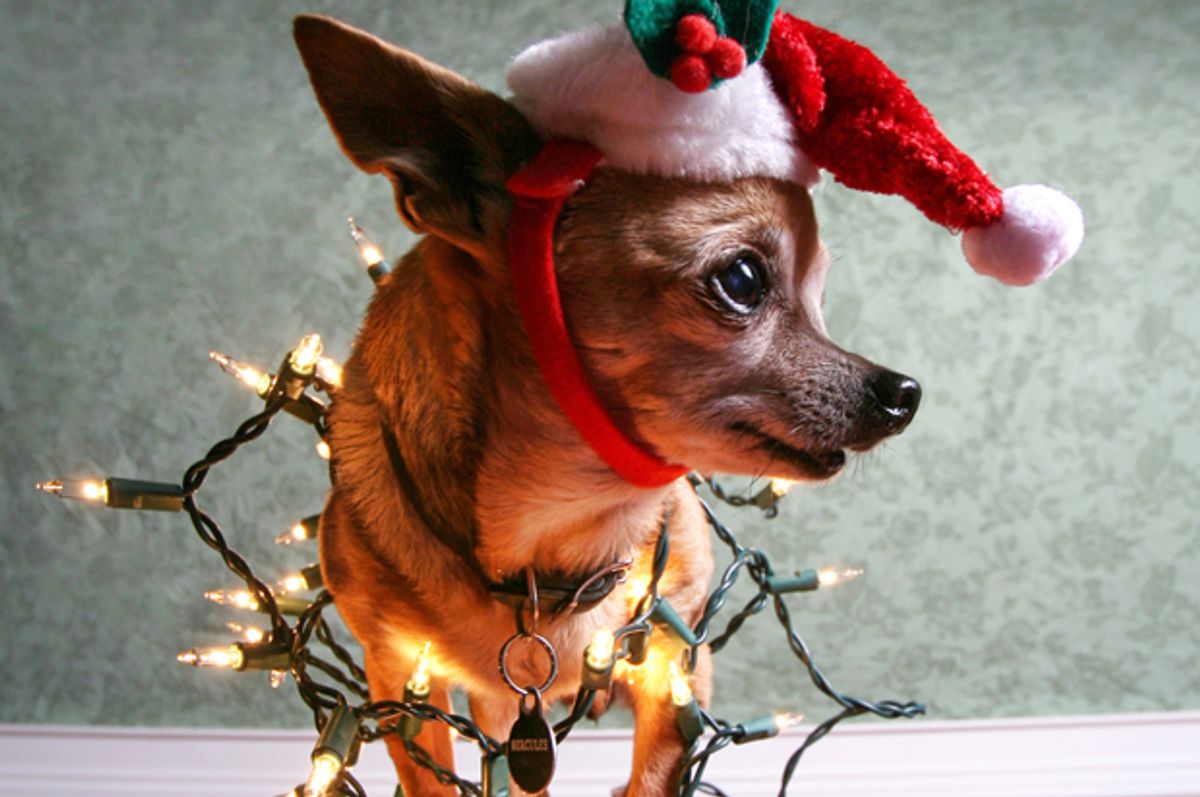 When the calendar page turns to Nov. 1, and radio jingles start to reference “the magic of the season,” I feel something murkier, more malevolent, than the usual holiday anxiety, that standard chaos of cooking the most tender turkey (and a perfect re-creation of grandma’s stuffing), finding the right gift, and planning the perfect party. From the moment that first note of Mariah Carey’s “All I Want for Christmas Is You” crackles out through the car stereo, to the day the last of the wreaths are swapped out for Valentine’s Day candy, I walk around seething. I’ve never shared in the feelings of peace on earth and joy to the world that all the greeting cards proclaim: My formative Christmases were spent keeping Daddy from the eggnog (if he hadn’t already raided the whiskey we would’ve used to make it) and hoping to get through the day (and the Eve, if we were truly lucky) without broken plates and swollen jaws—because wrathful tempers, unlike most businesses, don’t close up shop for the holiday. The images of rosy-cheeked children snuggled up in their beds and stockings hung by chimneys with care were reminders that my house was a hot-box: Holiday idyll only threw the violence I lived with into a sharper, more savage relief.

For a long time, I assumed that my hatred of all things holly-jolly was just more evidence that I was broken by my upbringing, and my bitterness against the yuletide call for family love and joy to the world meant that I would never experience either, in any season. Think of the seminal stories of the holiday, "A Christmas Carol" and "It’s a Wonderful Life": Both follow sad, fractured protagonists who only find redemption in committing themselves to “the spirit of the season”: an abiding and unstinting goodwill toward all. I tried to smother my bitterness in forced smiles, to drown it in whiskey, to massage it loose through acts of charity. It was in this last act, ironically, I found the perfect image to explain, and embrace, my resistance to Christmas.

I volunteered at a dog rescue group devoted to larger, harder-to-home breeds; our big fundraiser was a gift-wrap and doggie photo shoot with Santa at a chain pet goods store. Customers brought in dog after dog, decked out in red-and-green bandannas and snowman sweaters, and made them sit at Santa’s boots, or plopped them on his lap; the dogs shivered and whined as the photographer chirped, “Say jingle bells!” Then we photographed the rescue dogs currently being fostered, and this seemed especially pathetic: animals that had been bred out and beaten, left on roadsides and in deep woods, chained and starved, now kitted in bandannas and bows and felt antlers. I remember one mastiff, with the long, pained face and deep eyes of a painted saint, shaking her head against some antlers. The indignity of this fake cheer forced onto a creature who had already suffered so much, finally made me realize that my antipathy toward Christmas, or, at least the way it’s packaged and sold, isn’t a sign that I am irrevocably damaged. It is, and has always been, my resentment of the season’s enforced joyfulness meted out in endless heaps, of the gaudy sentimentality that has strangled real feeling.

Now, I know that, technically, the “true” story of Christmas involves a baby in a manger and three wise men (who are not named Rudolph or George Bailey or even Nicholas), but mine was a secular home, and, despite what the frothing Fox News viewer would insist, ours is a secular culture (as it should be). Christmas has, by and large, been stripped of its religious origin: In place of that, we now have drugstores choked with cheap plastic ornaments; shopping malls done up as winter wonderlands, thrumming with harried parents and kiddos clamoring for Santa’s lap; the cookie-scented candles and the influx of cards that are mini-masterpieces of the humblebrag. And many self-proclaimed “Christians” have given themselves over to the crass commodification of the season, tormenting teenage baristas because Starbucks cups aren’t patterned with snowflakes or reindeer. Quite a number of the “keep Christ in Christmas” crowd vociferously supports building internment camps and walls to keep out refugees, while forgetting that Joseph and Mary were religious minorities and displaced persons. But this hard, sad truth is harder to manage than a shallow indignation over the color of a paper cup that will end up in the trash, anyway.

Christmas and Thanksgiving have become pageants of enforced feeling, or what Milan Kundera would define as kitsch: “Kitsch causes two tears to flow in quick succession. The first tear says: How nice to see children running on the grass! The second tear says: How nice to be moved, together with all mankind, by children running on the grass!” Kitsch insists that we feel the same way, at the same time, and then tuck that sentiment away oh-so-tidily; it steers us away from the sad and raw and true by offering a false approximation—and it has turned much of American discourse, all year ‘round, into the ending of "Good Will Hunting," where the title character can flush away a lifetime of abuse with a heroic sob on a therapist’s shoulder so he can then “go see about a girl.” Kitsch offers thoughts and prayers to the victims of gun violence. It doesn’t believe in politicizing tragedy, or wading too deeply into grief, but it will never stop cranking out 9/11 anniversary specials. Kitsch will make Oscar winners of actors who play doomed queer and transgender characters, but will stick its fingers in its ears whenever a trans woman is shot or beaten to death on the street. Kitsch celebrates American freedoms with country songs and flag pins, but asks, in hushed tones, why those people have to block the streets protesting the police shooting of an unarmed 16-year-old during holiday shopping season.

Holiday kitsch is but one strain of “put on a happy face” virus: It leaves us no room to hate our mothers or be crushed with sorrow that our fathers will never be good men; it will not allow us to feel scared and desperate about how we’re putting food on the table, let alone get gifts for our kids; it won’t abide our anger at being alone, or, alternately, our desire for solitude, and it certainly won’t acknowledge the depression and anxiety we deal with every other day of the year. I knew I could not be alone in my humbug, so I opened up a Facebook thread where others could vent. A friend tells me that the worst part of her holiday hell was masking her real feelings so she could fit in with everyone around her: “Christmas used to be really hard for me. I would want to be happy, but my depression made it impossible. And I'll be honest—having to pretend you are happy when you just want to curl up and die is like death from a thousand paper cuts.”

The pressure to let bygones be bygones and gather around the Thanksgiving table or the Christmas tree pushes us to take off our armor around the family members who would easily inflict those thousand cuts. A social worker says that many of her clients, particularly LGBTQ clients, struggle with whether or not to return to houses where they were demeaned, denied or outright abused—just because of a pressure to look happy, and to try to create actual good memories (even when the evidence suggests a slim probability of this actually happening). But even those good memories can sting in times of grief; writer Leslie Pietrzyk says that the first few holidays after her husband’s death were “a brutal endurance test.” And the push to create the Hallmark moments that drive the holiday songs and movies is overwhelming and embittering for parents with the best intentions. A former co-worker remembers that “being a single parent with two boys was depressing because I never had the finances to have the Christmas the media said I should have.”

Of course, there is a difference between the Christmases that the media tells us we should have, and the deeply personal ways that many people make the holiday meaningful. One of my beloved neighbors delights in decorating her apartment: She wraps silver bows around each of the bushes, and a garland around the handrail; sometimes, she weaves tiny white lights around the fence in front of her porch. Whenever I walk my dog past her place, I feel the joyfulness in these small, intimate gestures, done for no wider or culturally demanded reason but simply to please herself, her neighbors and her grandchild, and that joyfulness makes my Grinch heart grow at least one and a half sizes—because it is so genuine, and the genuine is kitsch’s kryptonite. My neighbor gives me a card that reads “the holidays always give me a warm feeling deep down inside … sort of like whiskey, but not quite that good.” It’s the right kind of wry, it knows me well and doesn’t insist on me being anything other than I am.

Still, these genuine moments seem few and far between, since so much of the holiday noise is like the tuneless muzak pumped through the grocery store: I can hear the words "love" and "joy," but only dimly, and through a heavily synthesized keyboard and obliterating bass. I’m done with ads proclaiming that the holidays are the best time to tell mom you love her, or to give your girlfriend a diamond tennis bracelet; I’m tired of canned food and coat drives only happening (or at least getting attention) in the weeks between Thanksgiving and Christmas, and that goodwill toward humankind (or at least the office giving campaigns) ending as the eggnog curdles; and I never want to hear that if I just invent my own traditions, or find a loving partner to share the season with, or devote myself to volunteering, I too can finally stop worrying and learn to love Christmas. The people who tell me these things are often my friends and colleagues I feel kindly toward, and yet, in those moments, they become the cat-callers who heckle me to “c’mon, smile, baby.”

It’s not that I want to seethe, to be sad and brittle, but it feels only natural when I am bludgeoned with images of a perfect life and an ideal world that can never truly be. Drop by drop, the twin tears of kitsch are filling an ocean—and those of us who don’t want to go back to the broken homes and too-small towns we fled as fast as we could; who are numbed by illness or grief; who can’t stand to disappoint our children with less than perfect gifts, or let down those well-meaning aunts who always ask why we’re still single, will drown. The only thing that can buoy us is acknowledging our real feelings, all of them, from the pathos of seeing a silver bow on a dried bush to the anger at being asked to spread sugar plums over a shit sandwich. And if the path toward shore is dark, so be it. I don’t need a strobing multicolored light show to brighten my way.