Rumors of cinema’s death have been greatly exaggerated: 2015 was one of the best years for movies ever

Sure, TV is in its peak now—but in spite of Hollywood's blind spots, this year's movies have been incredibly strong 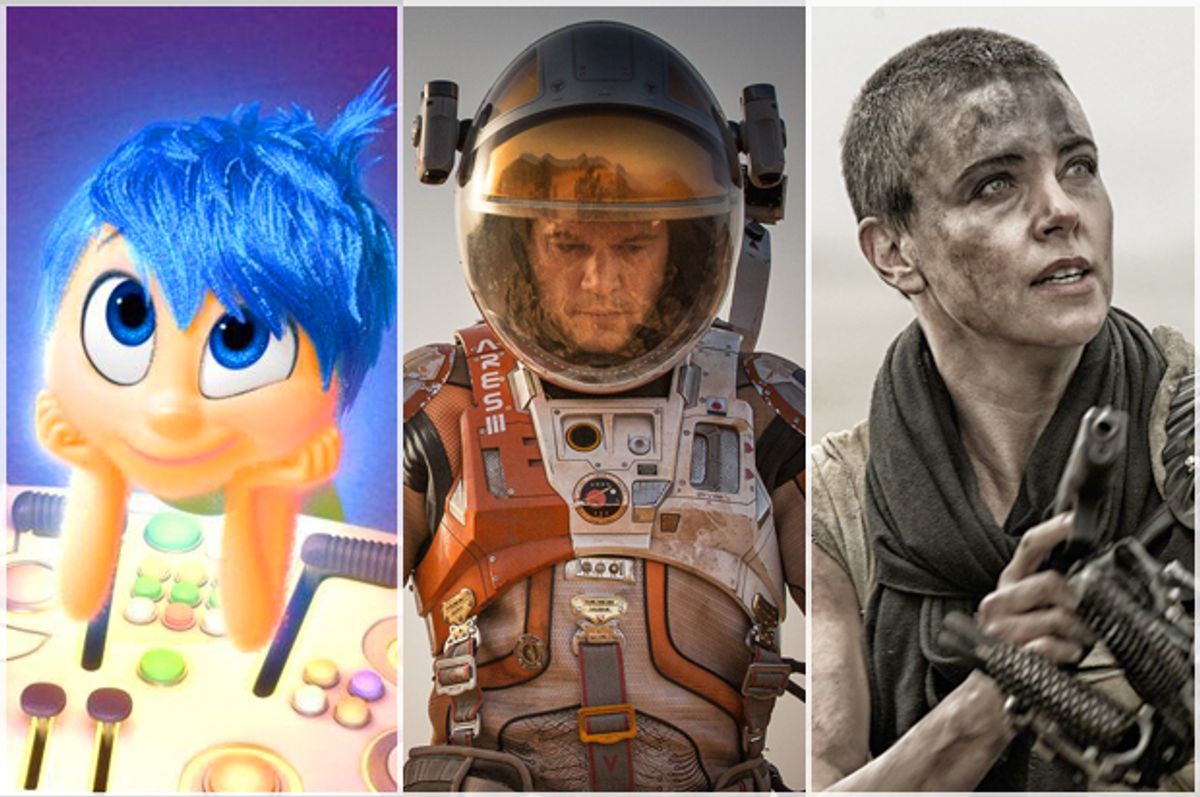 What was the greatest year ever for movies? Answering this question has led to a never-ending debate among moviegoers, as there is a seemingly endless list of options.

The common film school response is 1939, which brought us classics like “Gone With the Wind,” “The Rules of the Game,” “Ninotchka,” “The Women,” “Mr. Smith Goes to Washington,” “Stagecoach,” and “The Wizard of Oz.” But there’s also 1977, the year of “Star Wars,” “Annie Hall” and “Saturday Night Fever.” What about 1994, when “Pulp Fiction,” “Forrest Gump” and “The Shawshank Redemption” all hit theaters? Or 1999, which was absurdly stacked with films like “Being John Malkovich,” “Fight Club,” “Magnolia,” “The Matrix” and “American Beauty”? I’ve always been partial to 2007, which boasted three of the best films of that entire decade: “The Diving Bell and the Butterfly,” “There Will Be Blood,” and “No Country for Old Men.”

While it might not beat 1939—no one invented Technicolor or anything—I humbly propose that 2015 should stand alongside these beloved years in renown. Although 2013 had “Gravity,” “12 Years a Slave” and “Before Midnight,” and last year boasted “Boyhood,” this was one of the best years for movies in recent memory, and the numbers prove it. On Metacritic, 11 movies have scored better than a 90 this year. If we exclude films that weren’t widely reviewed (say, anything with less than 15 write-ups), that’s still nine movies with stellar scores—better than any other year in the site’s history. The next best total was 2013, when eight films bested 90, but most years only have four or five movies with scores above that bar. 2005, a very bad year for movies, didn’t have any.

This year also saw more “universally acclaimed” films than in any year prior. As calculated through Metacritic’s algorithm, these are movies that score an 81 or above, and 45 movies came out this year that earned over that mark. Over the past decade, an average of 30.5 acclaimed movies have come out each year. The past couple of years have been particularly good—with 41 acclaimed films released in 2013 and 40 debuting in 2014. That’s partially due to the bias of the Internet itself: The time and resources devoted to film criticism on the Web have grown considerably since 2005—due to the growth of aggregation sites like Metacritic and Rotten Tomatoes. This means that there are simply going to be more reviews and more films on the site.

Even accounting for this selection bias, it’s hard to argue with the fact that 2015 has been a pretty stellar year all around. This year is currently on track to be the biggest in box office history—with domestic earnings totaling $10.4 billion (and counting). In addition, “Star Wars: The Force Awakens” recently shattered the record for the biggest opening weekend—just months after “Jurassic World” bested the previous benchmark. Only time will tell, but it’s likely that “The Force Awakens” will surpass “Avatar” as the highest-grossing movie ever, at least in current dollars. When adjusting for inflation, neither can touch the $1.7 billion “Gone With the Wind” raked in. (1939 strikes again!)

Whether it’s in bankability or overall quality, there’s a lot to love from 2015. Even if you’re not a “Star Wars” kind of person, it's been a pretty stellar year for every kind of moviegoer. “The Martian” and “Ex Machina” offered two very different but equally compelling takes on modern science fiction. Franchise sequels like “Creed,” “Mission Impossible 5” and “Mad Max” far exceeded anyone’s expectations of them—with “Fury Road” and “Rogue Nation” the best entries in the series yet. If you were looking for a foreign film, there was “Son of Saul,” “Phoenix” and “Taxi,” the Jafar Panahi pseudo-documentary that pushed the boundaries of cinema as a medium of protest.

Arthouse viewers had “45 Years,” “Tangerine” and “Diary of a Teenage Girl,” one of the best-ever depictions of adolescence on-screen. When it came to animation, there was Pixar’s “Inside Out,” one of the studio’s highest grossing and most acclaimed films, and “Anomalisa,” Charlie Kaufman’s rapturous return to the cinema. This year’s documentary lineup included eclectic picks like “The Look of Silence,” “Amy” and “Finders Keepers,” the greatest movie you’ll ever see about a legal battle over a foot.

And this Oscar race may be the first year in recent memory in which I like or love every single movie nominated for best picture. After the Academy Awards switched to the confusing 5-10 formula in 2009, it allowed into the lineup a slew of just OK (and occasionally outright bad) films that wouldn’t have stood a shot in a five-picture race: “The Theory of Everything,” “Les Miserables” and notably the Sandra Bullock vehicle “The Blind Side.” This year, every single presumptive nominee absolutely deserves to be in contention, and the hopefuls include “Spotlight,” “Carol,” “Bridge of Spies,” “The Big Short,” “The Revenant” and “Brooklyn.” These movies all scored an 80 or above on Metacritic.

As Alyssa Rosenberg pointed out in the Washington Post, what made 2015 great wasn’t just the quantity of quality movies but how eclectic they were: Films like “Straight Outta Compton,” “Furious 7,” “Trainwreck” and “Pitch Perfect 2” were all major hits while boasting women and people of color in lead roles, while Spike Lee’s “Chi-Raq” earned the always controversial director’s best reviews in a decade. Hell, even M. Night Shyamalan released a pretty good movie this year, the octogenarian horror-comedy “The Visit.”

The year, of course, wasn’t perfect. Hollywood still sucks at diversity outside of a handful of movies that acknowledge people who aren’t white, male and named Chris, Matt, Brad or Ben. The failure of Cameron Crowe’s “Aloha,” which famously cast Emma Stone as a half-Asian cadet, was an embarrassing indication that the industry still doesn’t know how to handle race. And a number of costly flops further proved that Hollywood often has no idea what people want. These included “Fantastic Four,” “Jupiter Ascending” and the recent “In the Heart of the Sea,” the real-life “Moby Dick” tale starring Chris Hemsworth that appears to have been made for no one. The film has made just $11 million domestically on a $100 million budget.

But what’s incredibly encouraging about 2015’s many successes is that they prove the death of cinema has been greatly exaggerated. What all the years that have been considered the great periods of cinema—1939, 1977, 1994, 1999 and even 2007—have in common is that they’re in the past. Today, all the action and excitement is around the “Golden Age of Television,” signified by shows like HBO’s “Game of Thrones,” Fox’s “Empire,” Netflix’s “Master of None,” and FX’s “Fargo.” The conventional wisdom is that TV has become the definitive medium for entertainment and that cinema’s glory days are long gone.

2015 shouldn’t just be remembered as one of the truly outstanding years in cinema, one so good that I didn’t even get to mention movies as wonderful as “Grandma,” “Queen of Earth” and “Mommy.” It should be heralded as the year that reminded us why cinema will be around for as long as we have such incredible, diverse, boundary-pushing stories to tell.