"The Hateful Eight": Tarantino's snowbound historical gore-fest has a point, yes — but is the ordeal worth it?

Part racial-revenge fable and part country-house mystery, Q.T.'s 3-hour western is a riddle with no solution 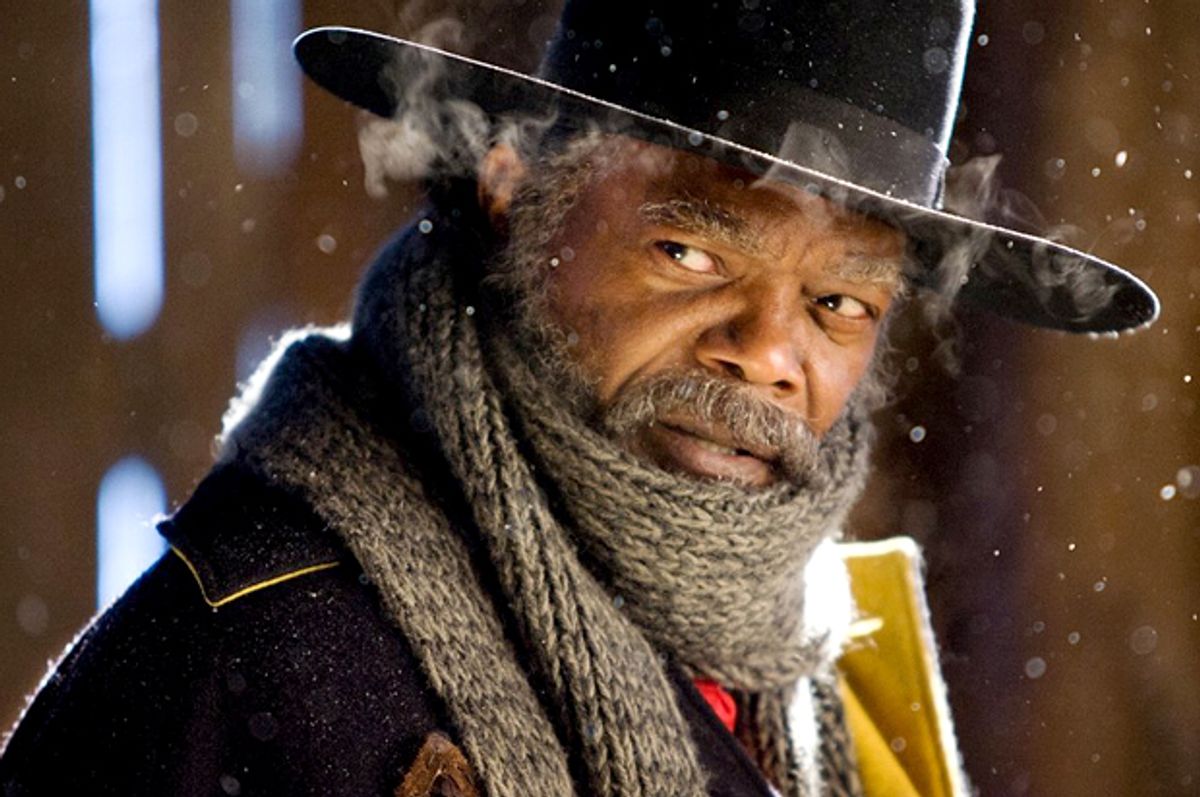 Samuel L. Jackson in "The Hateful Eight" (The Weinstein Company)
--

It never pays to read what other people have written about a movie when you know you have to write about it yourself. If I can provide a valuable service in writing about something most people haven’t seen yet – which is debatable, I realize! – that means coming at it from all possible directions with as wide a range of associations as I can manage. It’s about being in the universe of the movie itself, and also being in the commercial and cultural universe where the movie has landed, and presumably plays some sort of function. Once you box yourself into the universe of Things Other People Have Already Said About This Thing, you have purchased a one-way third-class rail ticket to stupidity.

Sometimes, as with the grueling and baffling recent films of Quentin Tarantino, I find myself unable to resist. When I run across blurbs in which someone whose work I have read, or maybe someone I know personally, describes Tarantino’s new movie “The Hateful Eight” — for such is our text today, brothers and sisters — as “fun” or “hilarious,” I become perplexed. Because if they saw the same movie I did, then either I don’t know what those words mean, or they don’t. On the other hand, this experience provokes a twinge of sympathy for those aggrieved readers who write to me every time I endorse some three-hour film in Moldavian with no discernible plot, informing me that I cannot possibly have found actual enjoyment in this ordeal and that I evidently do not understand that movies are meant to be entertainment.

There are a lot of things you could say about “The Hateful Eight,” good and bad, before you get to “fun” or “hilarious.” (Do I really have to make clear that this is my opinion, and not presented as a universal truth for all human viewers? Whose name is up there at the top of this page?) It’s a work of considerable narrative and thematic ambition, to go along with Tarantino’s usual formal ingenuity. I’m not sure anybody has ever combined the blood-soaked revenge western with the English country-house mystery before, and quite likely no one will ever try it again. This movie is also a remake or amplification of Tarantino’s gangster classic “Reservoir Dogs” (and maybe the Tarantino-scripted “From Dusk Till Dawn”) and a parable about racial conflict and racial progress in America, in which an African-American Union Army veteran and a good ol’ boy, Stars-and-Bars ex-Confederate join forces against chaos and disorder.

I’m not sure this is a case of too much plot getting in the way of the story, in the words of my mentor and idol Joe Bob Briggs. It’s more the other way around. “The Hateful Eight” is so self-consciously about so many wobbly, interconnected and contradictory ideas that it only intermittently resembles a movie, which to my taste was kind of the problem with “Inglourious Basterds” and “Django Unchained” as well. On a conceptual level, I get it: Tarantino has internalized and synthesized the threadbare narrative modes of the pulpy genre movies he loves, and turned them to his own purposes. This is, may God forgive me, a profoundly postmodern film in which the point is not whether the story hangs together in some organic or holistic way, because it doesn’t even try to do that, but something totally different.

What would that other thing be, exactly? I mean, on one level “Hateful Eight” is a movie you can watch while profoundly stoned and immersed in social media until the increasingly outrageous action beats capture your attention, and that’s one version of the experience. The first hour, at least, features no gunplay and a bunch of talking, and may well strike mainstream moviegoers as immensely slow and boring. Keeping people off their phones and preventing altercations may pose a challenge for theater management. On the other hand, you can soak in this movie at length, like a blood-tinged tub full of film-geek references and convoluted historical gags, and that’s another experience. Tarantino has concluded that conventional storytelling isn’t that important in this kind of movie-movie (and probably never was), and I don’t think we can conclusively say he’s wrong.

Two beloved faces from the Tarantino pantheon, Samuel L. Jackson and Kurt Russell, meet on a remote Wyoming mountain pass in midwinter, with a blizzard coming on. These two guys only vaguely play characters, but they know each other: Jackson is Marquis Warren, a onetime Union Army captain turned bounty hunter, and Russell is John Ruth, a professional colleague who specializes in bringing his prizes back alive. The year is approximately 1875, a decade or more after the Civil War. (There actually were a handful of black commissioned officers in the Union Army, but if you're looking to a Tarantino movie for historical verisimilitude, we need to have a talk.) Ruth is escorting a dastardly female criminal called Daisy Domergue, played by Jennifer Jason Leigh, to the town of Red Rock for her impending date with the hangman. If you think that Tarantino’s recent self-reinvention as anti-racist historical re-enactor means that he’s lost his appetite pour épater le bourgeois, wait till you see how many times the film’s only major female character gets randomly beaten and bloodied, her eyes blackened and teeth punched out. What could be more fun and hilarious than that?

Anyhoo – one of the characters in this movie says “anyhoo,” just to remind us that Tarantino is not concerned with the niceties of period dialogue – Ruth and Warren wind up stuck inside a remote establishment called Millie’s Haberdashery, where a group of other men have sought shelter from the storm. Warren perceives right away that something is wrong with this picture: Millie and her husband, the longtime proprietors, are absent and unaccounted for. Exactly how wrong things are for the shifty-eyed inmates of Millie’s, and in what way, takes a considerable while to play out. More than three hours, in fact!

Yeah, the 187-minute running time of “Hateful Eight” includes a 1970s-style intermission, to accompany the grindhouse opening credits and the limited release in Panavision 70mm (beginning Christmas Day, in some markets), which is about as O.G. as a movie can get. But you’re still sitting there for a hell of a long time while all these rogues and rascals work out whom to kill first. The list includes a smooth-talking Englishman played by Tim Roth, who says he’s the Red Rock hangman; Walton Goggins as Mannix, the aforementioned Southern redneck, who says he’s the Red Rock sheriff; Bruce Dern as a legendary Confederate general, snoozing by the fire; Michael Madsen as a cowboy diarist on his way to visit Mom for Christmas; and Demián Bichir as the dour Mexican stable hand who calls himself Bob. (A sombrero-wearing Mexican named Bob is a distinctive Tarantino flourish, verdad?

Here’s a huge spoiler: Not all those people will be departing Millie’s alive after the blizzard clears. Tarantino’s intermission serves as a narrative dividing line, as well as allowing you to clear the Mountain Dew from your system. Before the break, “The Hateful Eight” is a tense and claustrophobic mystery, with more than a little bit in common with an Agatha Christie novel. (If Peter Ustinov showed up at Millie’s in the role of Hercule Poirot, he wouldn’t bust the plausibility meter any more than it’s busted already.) After the break, we get the gruesome and grotesque splatter-fest Q.T.’s fans have presumably been waiting for, complete with graphic descriptions of a sadistic sexual assault (involving the phrase “big black dingus”), two people barfing out their guts after being poisoned, a surprise guest in the basement and the back story of what happened to the proprietors and staff of Millie’s. (Not something good.)

Everybody keeps on pounding Jennifer Jason Leigh until it’s no longer helpful or necessary to do so, which may be intended as some kind of parable or may not. As for the final lesson learned by Walton Goggins’ racist cracker and Sam Jackson’s vengeful you-know-what, which is that they have to trust each other despite their differences if they hope to survive—yeah, I get the big allegorical point, which connects with some tragic and ironic force. My personal view is that Quentin Tarantino is now permanently high on his own supply, but you could just as well say that he has succeeded in reinventing the art film. Is it worth it to put yourself through the brutal and incoherent three-hour ordeal of “The Hateful Eight” for its moments of brilliance and its ultimate catharsis? Jesus, don’t look at me.

The “Super 70 roadshow” version of “The Hateful Eight” opens Dec. 25 in major cities, with wider national release (in 35mm) to follow.