Oh, the irony: GOP loses support of top evangelist because he bought their lies 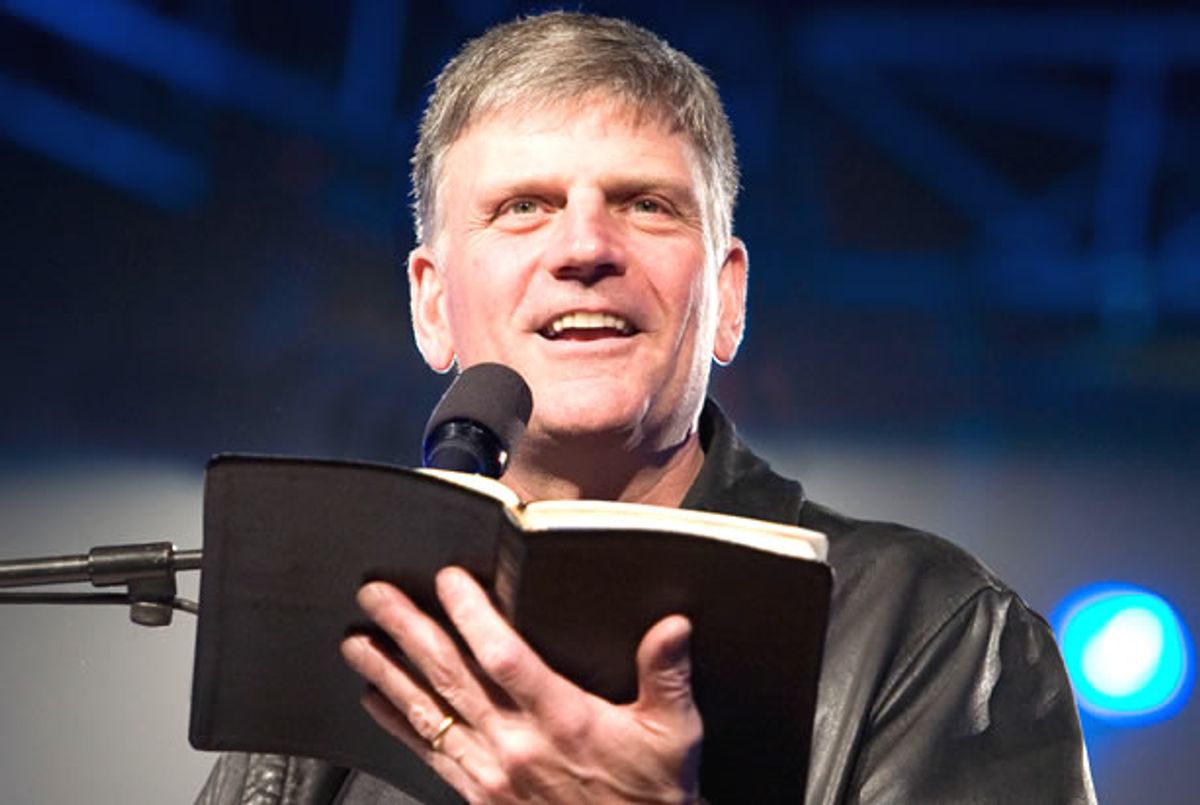 The second-generation religious entrepreneur Franklin Graham announced this week that he’s quitting the Republican Party. Over what, you ask? Well, the good reverend is furious about the omnibus spending bill passed last week in in Congress, which – you guessed it – continues to fund Planned Parenthood.

“Shame on the Republicans and the Democrats for passing such a wasteful spending bill last week. And to top it off, funding Planned Parenthood! A Huffington Post article called it ‘a big win for Planned Parenthood.’ I call it a big loss for America. After all of the appalling facts revealed this year about Planned Parenthood, our representatives in Washington had a chance to put a stop to this, but they didn’t. There’s no question—taxpayers should not be paying for abortions! Abortion is murder in God’s eyes. Seeing and hearing Planned Parenthood talk nonchalantly about selling baby parts from aborted fetuses with utter disregard for human life is reminiscent of Joseph Mengele and the Nazi concentration camps! That should’ve been all that was needed to turn off the faucet for their funding. Nothing was done to trim this 2,000 page, $1.1 trillion budget. This is an example of why I have resigned from the Republican Party and declared myself Independent. I have no hope in the Republican Party, the Democratic Party, or Tea Party to do what is best for America. Unless more godly men and women get in this process and change this wicked system, our country is in for trouble. I want to challenge Christians, even pastors, across the country to pray about running for office where they can have an impact. We need mayors, country commissioners, city council members, school board members who will uphold biblical values.”

A couple of things: First, “the appalling facts revealed this year about Planned Parenthood” weren’t facts. Graham is referring to the leaked Planned Parenthood videos suggesting that the organization was pawning baby parts on the black market. As everyone now knows, those videos were deliberately edited and part of a massive anti-abortion propaganda campaign.

Second, and this is getting tiresome, taxpayers aren’t “paying for abortions.” As the Washington Post emphasized several months ago, “Federal dollars are not used to provide the service at the center of the political debate around Planned Parenthood: abortions. That’s been banned by law in almost all cases since 1976 [the exceptions being rape, incest, or to protect the life of the mother].”

Facts aside, Graham’s moral tirades are meaningless at this point. Earlier this year, Graham took a similarly misguided stand against Wells Fargo because one of their ads “went beyond being gay-friendly to being a public advocate.” The ghastly ad in question is hardly provocative, however. It featured a lesbian couple learning sign language as they prepare to adopt a deaf child – the horror!

When the ad was released, Graham again lashed out via his Facebook page: “Have you ever asked yourself – how can we fight the tide of moral decay that is being crammed down our throats by big business, the media, and the gay and lesbian community?” So this is the how finely tuned Graham’s moral compass is: He thinks America’s decline is attributable to the “gay and lesbian community.”

The good reverend also found time in his busy schedule to praise Vladimir Putin for his disgusting and archaic anti-gay laws, which have contributed to the death and torture and suffering of countless Russian citizens. Graham, in other words, is a morally confused man, and his obnoxious religious shtick only makes it worse.

As for his decision to quit the GOP, I doubt it matters much. Graham has clout because of his father, another fatuous firebrand, but there’s nothing new about his contempt for the Republican Party. This resentment has been building for a long time among the religious right – the success of anti-establishment evangelicals like Ted Cruz and Ben Carson are a reflection of that.

So Graham’s tantrum is amusing, but not at all surprising.