“The thought of a white man in my chimney does not delight me": Let's stop lying to our kids about Santa

Is Santa a harmless myth, or are we conditioning ourselves to lie to our children about much more than Christmas? 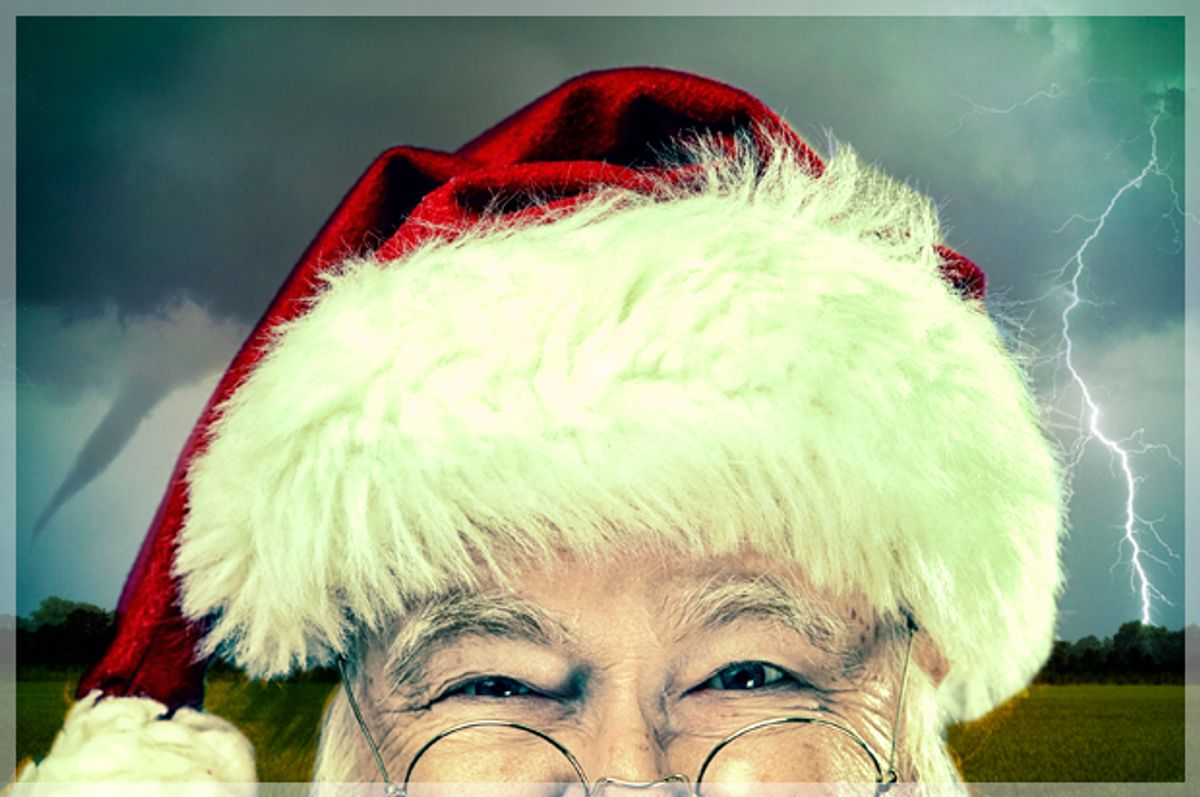 It was a hazy summer day, the summer of my sixth year, when it hit me, seemingly out of nowhere, that there was no such thing as Santa Claus. We were returning from a visit to my grandmother’s house, and from what I can recall there was no context for my revelation. We were driving home, us kids squashed in the back of the car, my dad with his elbow perched out the window into the breeze. I leaned into the front seat and asked quietly, “Daddy, is Santa real?” Maybe it was the thin quiver of tears already at the edges of my eyelashes that compelled him to answer as seriously as he did. “We’ll talk at home,” he said quietly. I was the oldest child and he wasn’t about to ruin it for all of us in one quick moment. Not on a summer day. But the solemn way he spoke confirmed my suspicions. Santa wasn’t real. I sat back in the seat, pressing my hands between my knees and squeezing my lips together tightly as I tried to hold back my tears.

Later, as we sat on our back deck listening to the crack of the bat and the shouts of the kids playing softball a few yards over, I sobbed as he rocked me in his lap. “And no Easter bunny? And no tooth fairy, either?” He tried to reassure me by telling me that I would still get gifts and dimes under my pillow. But it wasn’t the fact that these wonderful creatures did not exist that was causing me such pain. It was the fact that my parents, the two adults whom I trusted most in the world, had taken it upon themselves to lie to me so casually about such important things. To not only take me for a fool but to actively make me into a fool. I felt duped and betrayed, and wondered, “What else have they lied about?”

When we had kids of our own, my husband and I decided that we would not do the whole Santa Claus thing.  I wanted my kids to know that they could rely on me for correct information, the truth as I understood it. Besides, what made the holidays special was not Santa. The magic was found in spending time with family, laughing, cooking and eating together, enjoying music or taking long walks to admire the holiday lights. I believed we could create traditions that would be magical and beautiful without relying on myth.

But my parents remained committed to Santa. My father even dresses up as Santa on Christmas Eve, wearing the same outfit his own father used to wear. When they were little, my daughters were appropriately spooked by the cheap beard and the joviality. I referred to the character as “Grandpa Santa,” hinting somewhere between the truth and the fantasy. We typically avoided talking about Santa until he appeared, rather focusing on the excitement of decorating cookies and taking hikes with their cousins.

One day when my oldest daughter was 5 she simply said, “Mom, Santa’s just Grandpa, right? And the other kid’s Santas are their grandpas too?” Fortunately, all I had to say was “Yep. Pretty much.” I felt so grateful that she didn’t feel angry or betrayed.

Why do we feel the need to go along with the Santa myth and lie to our kids? Is it to create magical moments and memories for them? Or is it to persuade ourselves that there is something worthwhile, magical and bigger than us in which we can also believe and participate in? Or, could it be that we are conditioned in this society to not tell our children the truth, not just about Santa but about many things?

In recent years I’ve come to realize how the pervasive Santa Claus falsehood mirrors bigger, more harmful and less defensible lies that we as a society tell our children. In many ways these lies have to do with our history, and our identity as a nation. As a child I wholeheartedly believed that the “Indians” welcomed the Pilgrims, and I loved dressing up as one or both on Thanksgiving. I wholeheartedly believed that our country was founded by righteous men who were so good that they couldn’t even tell lies. (I wonder what old George would have done with the Santa thing?) I wholeheartedly believed my teachers when they told me that the U.S. distinguished itself from all other countries by employing equality and fairness at all costs, and by entering armed conflicts only in self-defense or in the name of freedom.  I believed that the priests and nuns in my church were godly super-humans above reproach, and the notion that they could ever hurt a child would have been called both heresy and lunacy.  This list could go on.

This year I taught Leslie Marmon Silko’s novel "Ceremony" in my World Literature class. My (mostly white) college students knew absolutely nothing about Laguna Pueblo history and culture, or about indigenous Americans in general. The comment, “This is so different from what I learned in school!” led to a discussion about what we teach our children, and at what age they are old enough to learn the truth about our country’s history.  Isn’t it possible to find ways to teach them the truth while still being sensitive to their developmental needs?

The sad fact is that the students who are being protected from the truth are usually the white students. Children of color learn their history at home, often as a matter of survival in a world in which the consequences of that history continue to reverberate for them today. So at the end of the day this “protection” from truth-telling benefits white children at the expense of children of color, whose understanding of their own people’s history as well as their lived experiences are often negated by the need to whitewash many harsh truths.

The world is filled with acts of violence and hatred, perpetuated both by individuals and nations; children know this all too well, and they learn it early in so many different ways. Given today’s climate, many children are taught to manage “lockdown” drills to deal with armed assailants; how is it that they could not handle historical truths?  And what do we teach our children when we train them to uphold known falsehoods?  Even very young children are able to observe when we act unjustly or harshly, even as we teach them to “share” and “be nice."  We as a nation have acted, and in some respects continue to act in ways that are anything but nice. Will it really hurt children to become acculturated to a true understanding of our country’s history?

“The thought of a white man in my chimney does not delight me,” one of my friends, who is black, says. “It terrifies me.” Though we laugh, he makes a good point; experiences of different groups of people in this country have been very different. And our children are intelligent enough to understand this, whether we think they are or not.

If we want to create magic for our kids by lying to them, we should probably think through what our response will be when our children discover that we lied. Likewise, if we are going to dress our kindergartners up with little bonnets and feathered headdresses then we need to think about what we are going to tell them when they begin to discover what really went down.

Santa Claus will probably be around forever. There are families, like my family of origin, in which this tradition and what it means trumps any anxiety over the lies that sustain it. But perhaps this is a time of year in which we can consider the other lies we tell our children and ourselves. Our amnesia about our history does not serve us well. We know the horrors of colonialism. Indigenous Americans were systematically killed. Their land was stolen. No wonder they don’t celebrate Thanksgiving! People from Africa were brutally enslaved and oppressed, helping to build a country in which they had no rights for centuries.  Many of our revered founding fathers not only enslaved people but also sexually assaulted them, impregnating the women they raped and in some cases bearing many children with the women whom they enslaved. Yet new textbooks in Texas refer to enslaved Africans simply as “workers.” What would it mean for us, at this time of year in which many people focus on peace, love and family, to consider thinking about our own truths, lies and omissions, to consider reflecting on the truths of those around us who may not see the world in the same way?

When they were about 5 and 8, my daughters were discussing how silly it is to believe in Santa. “Anyway,” my oldest said. “Not everybody even has a chimney. Don’t people think about that?”

“Not everybody even has a home,” my youngest said. I could see the dawning awareness as a look of horror crossed her face. Would a world with Santa really be a world in which some children did not have a home? In that moment, they both seemed to be observing Christmas in a way far more meaningful than "believing in Santa." They were contemplating how fortunate they are, and thinking about what they could do to make a difference in the world; these are values we can celebrate at this time of year and beyond.