"I've had my fill of f**king intellectuals": Why the non-intellectual candidate fills this Trump supporter with hope 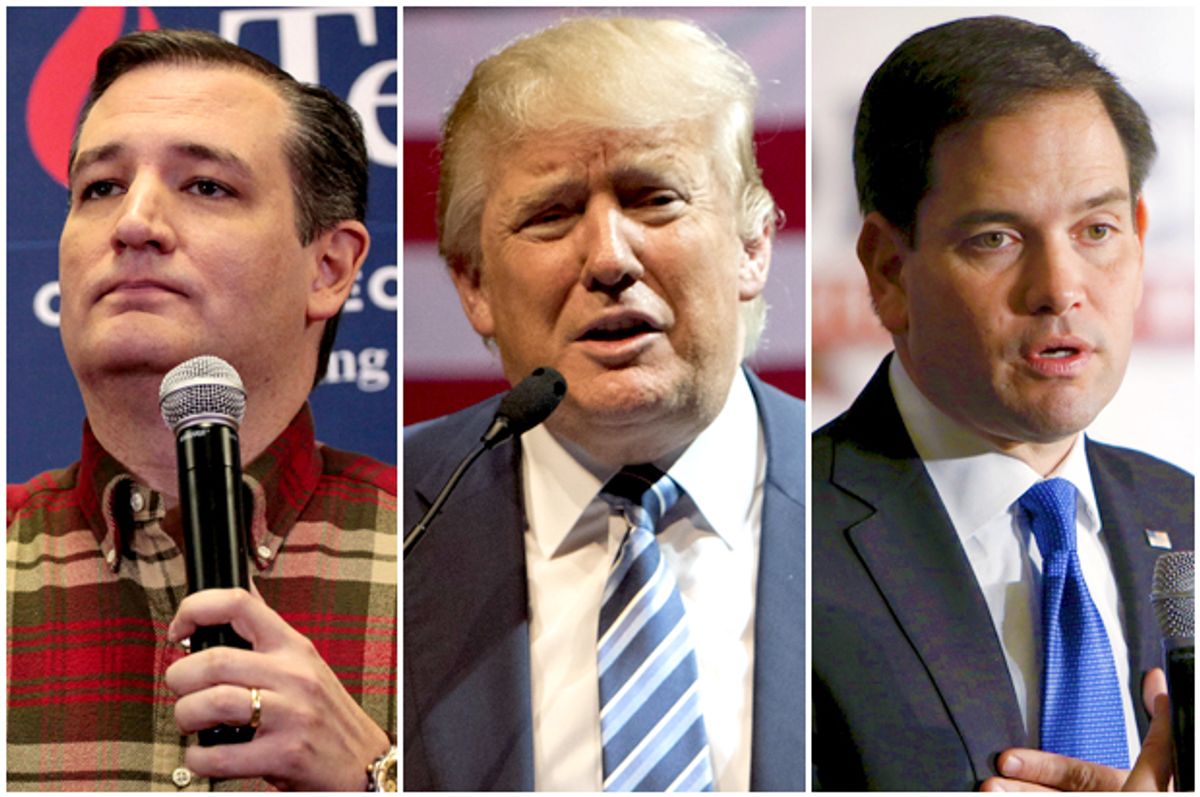 If he hadn't died in 1992 from complications related to AIDS, Arthur Russell, the poet-exile of Oskaloosa, Iowa, would be 64. Making a home among New York's queer underground, rubbing shoulders with Allen Ginsberg and John Cage, Russell, an avant-garde cellist, journeyed far from his Iowa home. But Iowa lingered in his music. "I close my eyes and listen to hear the corn come out," are the words that open his posthumous album, "Love Is Overtaking Me." The song's speaker is waiting in the fields for an illicit tryst.

I stand among a transfixed crowd in Smokey Row, a coffeehouse in Oskaloosa, with people who must have attended school with Russell. We listen to Ted Cruz, who happily disdains the kind of trysts Russell enjoyed. Cruz wears a powder blue gingham shirt and cowboy boots. Today, more than usual, he delivers a gleeful sneer.

"Amen!" cries the man next to me, who wears a ball cap, jeans and a studded belt. Cruz, whose father is a baptist preacher, knows how to transform a political town hall into a religious revival. He modulates between breathy purrs and staccato exhortation. He deploys well-practiced pauses. He uses anaphora better than any other presidential candidate. Soon the crowd is punctuating his stump speech with amens and c'mons and yeses.

Cruz is standing on a stage under a bright marquee with his name on it. Smokey Row's old-timey decorations—sepia photos of vintage cars, an oversize Pepsi bottlecap, a sign for Kresge 5¢ and 10¢, the store that became Kmart—match Cruz's folksy demeanor. The ceilings are high and the floors wood. Cruz makes a joke about how, when the pope was in town, Obama made things awkward by answering to His Holiness. The crowd is delighted.

Other of Cruz's jokes have more sinister implications. He tells one where the punch line is about using pesticides on regulators, another about how, after his presidency, countless members of the media will have checked themselves into therapy. A favorite of his involves padlocking the IRS and relocating its employees to the southern border. "Think about it, sir," he says. "Imagine you traveled thousands of miles in the blazing sun, you’re swimming the Rio Grande, and the first thing you see is 90,000 IRS agents. You’d turn around and go home, too!"

Imagine it, indeed. One might pause to imagine the suffering endured by migrants under that sun, but Cruz has the crowd under his spell. These former neighbors and classmates of Arthur Russell burst again into cathartic laughter.

Thirty miles north of Oskaloosa, a much quieter crowd listens to Marco Rubio. He speaks from a makeshift stage inside Brownells, which claims to be the world's largest supplier of gun parts. In 2012, after the Sandy Hook massacre, Brownells sold three-and-a-half years of ammunition for the AR-15—the semi-automatic rifle used by Adam Lanza—in three days.

CEO Pete Brownell, introducing Rubio, tells us that the building we're in, a new facility, "stands for support of firearm owners across the world." It is vast. We had to cross several hundred yards of cement to arrive at the event's scattering of folding chairs. Bobcats roam wide aisles stacked to the sky with inventory.

Brownell gives the stage to Jack Whitver, the chairman of Rubio's Iowa campaign and a former star wide receiver for Iowa State University. He says, "If you're looking for someone that can win, look to Marco Rubio." If Cruz exudes zealotry, Rubio's campaign sells pragmatism.

Rubio wears a blue campaign fleece over his white shirt and tie. He looks worn out. The crowd only applauds twice: once when Rubio mentions abolishing the Affordable Care Act, and once when he ends. But these aren't the same people who cheered for Cruz in Oskaloosa. A lot of the attendees here are dismayed with the state of the Republican Party. They especially dislike Donald Trump. They say that Trump is "too aggressive," that "he's making things worse," that he "seems a little far out." He embarrasses them. They tend to be upper-middle-class and, against Trump, they practice what we might call Republican respectability politics.

"It's just not the party I grew up with," says Stephen Blobaum, an IT worker from Des Moines. "This racial stuff," he says with a sigh, "it's gone from insinuations to right in your face racism."

Rubio delivers his stump speech then takes questions about paid family leave, Medicaid fraud and private detention facilities for illegal immigrants. As Rubio answers the final question, this one on national security, air rushes through hosing far above our heads, interrupting Rubio with a loud rustling followed by a pop. He looks up and says, "These Chinese hackers will stop at nothing." This earns him the only laugh he will get.

The American painter Grant Wood designed a stained glass window in his hometown of Cedar Rapids, Iowa, that depicts a woman in a mourning veil, holding a branch of peace and a wreath of victory over soldiers from six wars. It faces, from the far end of the Veterans Memorial Building, a stage with a podium flanked by eight well-lit Christmas trees. The sound engineer pipes in Andrea Bocelli singing "God Bless Us Everyone." We wait for Donald J. Trump.

People are here for different reasons. Jason Starsk, who wears a leather jacket with the names of hair metal bands like Motley Crüe and W.A.S.P. sewn into it, came because he likes how Trump presents himself on "The Howard Stern Show." The rally has the feel of a rock concert. Hundreds of attendees mill on the floor; hundreds more sit in rows of elevated seats. Most of the people I speak with mention Trump's celebrity. An ethnically diverse group of students from Coe College say they're here satirically.

Many of the attendees wear Trump paraphernalia, which they may well have purchased from the hawkers outside. The woman in front of me wears gray sweats and sports a button that says, "Hot Chicks Vote Republican." The man behind me has on a Trump trucker hat over his blond mop of hair, a knit sweater with an American flag on it, and a button that says, "Get Crazy Vote Trump." He voted for Barack Obama in 2008.

Trump arrives 20 minutes late. He leans into the podium's microphone. "You know what I'm going to say to start? Merry Christmas." The place erupts.

"Look at those people back there," he says, referring to the press pen, "they're terrible human beings." That gets big laughs. "The failing New York Times, they wrote a story." He is referring to an article that came out this morning detailing the Trump campaign's failure to organize get-out-the-vote mobilization for Iowa's caucus. "We have an incredible ground game," he says. He makes the Times a motif of his 75-minute speech, repeatedly mocking the paper.

An elderly man approaches me as I take notes. He asks what I'm doing. I tell him I'm a professor. "I've had my fill of fucking intellectuals," he says, but he clearly wants to talk. The air fills with "Jingle Bells."

"I love Trump," he says. "He's not an intellectual. He says he's going to make America great again, that excites me. I got so excited I went out and bought a tricycle. I can't hardly walk, but I bought a tricycle on just hope. I got it in August—end of October, 14 miles I was going on it, my Trump hat on backwards, going down the highway."

"I just got excited about it," he says. "The man excites me."