My daughter's heroes could all be my mother: What my teenager is teaching me about growing old

In our youth-obsessed culture, my 16-year-old would rather hang out with Betty White and her fellow grande dames 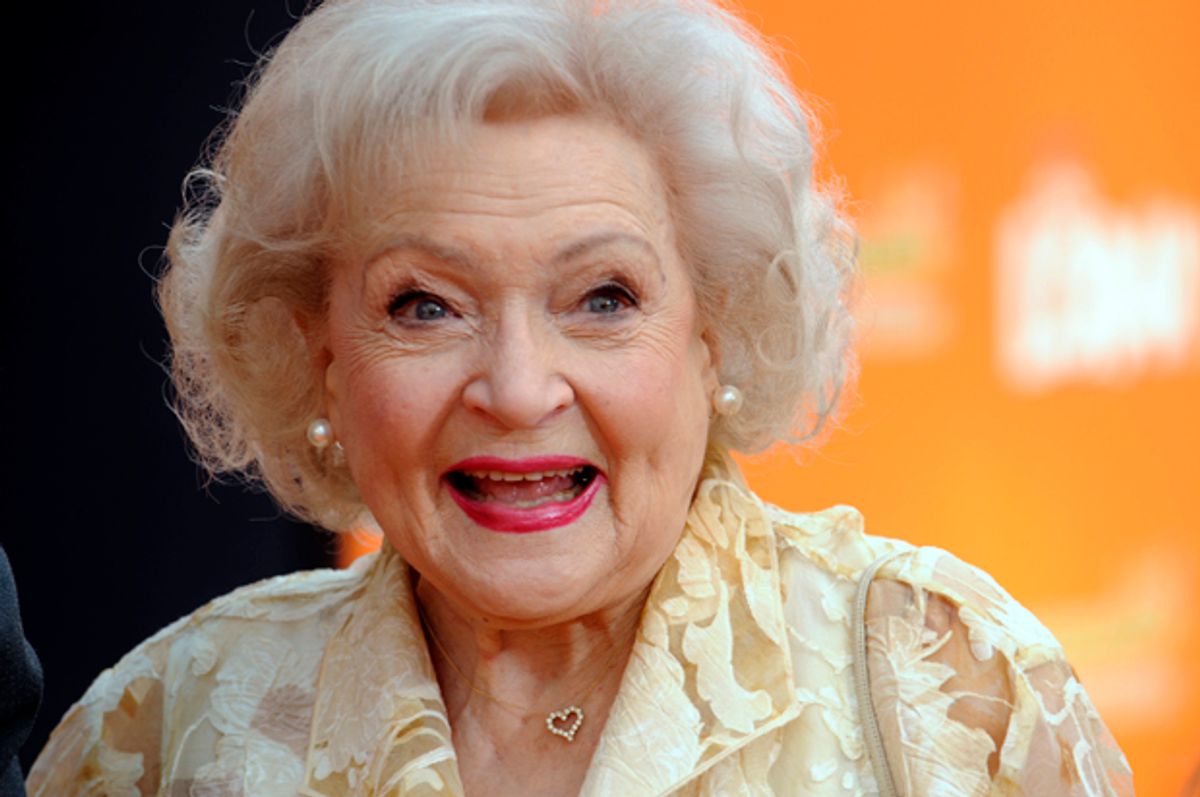 I don't recall when people started calling my firstborn an "old soul," but I'm pretty sure she hadn't started walking or talking yet. I think at first it was just about her eyes, the way they convey a certain combination of wisdom and boredom that always seemed out of sync with her age. Now, as she approaches 16, she somehow seems even further beyond her years. And it turns out my kid is the one who's teaching me how to grow old gracefully.

I should mention that in many respects my daughter is a typical high schooler. Unlike her mother, she recognizes the music playing at H&M without having to ask Siri to identify it. She has conversations about people who are famous on Vine. She can read a text without holding her phone — a phone that does not have its brightness set to the highest possible level — at arm's length and squinting. To the outside world, she resembles "Unbreakable Kimmy Schmidt's" Xanthippe. In her heart, though, she's more Betty White. Last night she watched "The Proposal." Again.

In the past year, my daughter has dragged me to see "Iris" and "The Second Best Exotic Marigold Hotel," read the Grace Coddington memoir, and, after getting hooked on Netflix's "Grace and Frankie," asked me in awe, "Do you know about Lily Tomlin? She's incredible." After watching the Elaine Stritch documentary "Shoot Me," she changed her iPhone's lock screen wallpaper to an image of the late Broadway legend, scowling on a New York City street in an oversize fur coat and hat. She's lately been on an Angela Lansbury and Tina Turner kick. Her favorite Peggy Carter? Elderly Peggy Carter. When I asked her recently why she's so fascinated with older ladies, my daughter simply shrugged and replied, "Uh, because they're queens?"

My child, admittedly, has the privilege of being a fangirl of the geriatric set while inhabiting an often more advantageous age group herself. Sure, she can't yet drive or vote, and rando dudes on the street love to order her to "Smile, baby." But a large portion of the popular culture revolves around the tastes of her and her peers, and none of the products in her makeup case contain the word "mature skin." It's possible that in 50 or 60 years — when, if she's lucky, she'll be a feisty old bird herself — she'll be less enchanted with the idea of being aged. Yet as one who is considerably closer to senior citizenship than she is, I find great inspiration in my daughter's frequent and sincere pronouncements of "You know who's a BAMF? Maggie Smith, that's who."

Like most of the women I know — with the possible exception of nursery school teachers and social workers — I routinely face the expectation that being over 40 renders a female irrelevant. Her lines or gray hairs are taken as demerits against the value of her ideas and opinions, calibrated on a scale in which the number of candles on her birthday cake represents her declining worth as a productive, interesting person. And when 32-year-old Anne Hathaway is getting iced out of potential roles for being thought too long in the tooth, you can understand why actual older women often feel discouraged, frustrated and prone to retinol binging. The fear of becoming invisible is real. The prospect of growing slower, jowlier, more-often-than-even-now-tuned-out is not pleasant. Last week I had to get my knee looked at. I tried to tell myself it was because my knee does a lot of running and not because my knee is just as middle-aged as the rest of me, but come on. My entourage now includes a knee guy. I feel like I'm not coming back from that one.

But my daughter — my daughter who has dewy skin and an ability to eat like a garbage-can-foraging raccoon without a heartburn-related care in the world — makes me feel better about everything. My daughter, who sincerely thinks hanging out with her 83-year-old grandmother is a hot time, gives me the hope that judging women based on the year they were born is actually a very old-fashioned idea. She understands that in a world in which girls and women are expected to be as aesthetically and temperamentally pleasing as possible, a woman who is long past giving a damn is a woman to be admired. She reminds me that being productive and useful in the world, finding new adventures within it yet to have — these are choices that no one can take away. And if 88-year-old Rosalynn Carter is still putting herself out there, what's there for the rest of us to be afraid of? Time isn't the enemy. Time is a gift. How fortunate I would be to someday become the kind of old lady my daughter admires. And my wise child is so right — Maggie Smith is a BAMF.