“Why Islam? Why are Muslims considered the worst by Americans?” The questions young Muslims ask me about Donald Trump and America 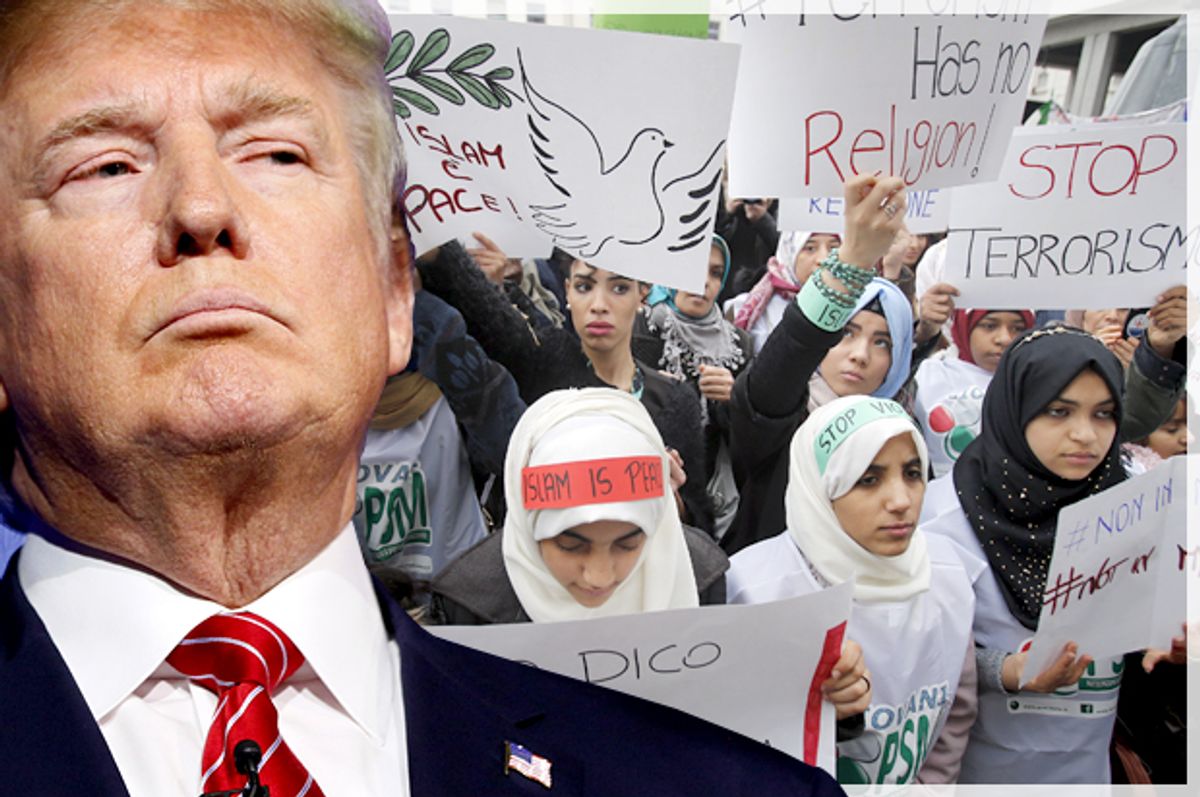 I was in Fez lecturing to university students when the news broke that Donald Trump had called for an immediate halt to Muslims entering the U.S.

In order to contextualize the Republican candidate’s strange ascendency in presidential politics, I started explaining how Trump had gotten to this position of prominence and his role in reality television. The students were way ahead of me. Most of them had seen “Celebrity Apprentice.”

With satellite technology and the Internet, the circulation of culture and news -- particularly bad news -- is accelerated exponentially. By telling ourselves that Trump’s comments are extreme and that their global impact can be countered by public disavowals, as many Americans believe, we are deluding ourselves.

To young Moroccans -- whose country is 99 percent Muslim and long friendly to the United States -- Trump’s anti-Muslim comments were the latest sign that American culture has become increasingly hateful toward them. The global effects of speech such as Mr. Trump’s are profound here and will be long-lasting.

I was in Morocco talking about my new book, “After the American Century,” which examines how American culture travels through the Middle East and North Africa in the digital age, and what it means to politics.

Fez is a sophisticated city: the home to the world’s oldest, continually operating university (the Qarawiyyin, which dates to the mid-9th century) and a city where many of the great philosophers and scholars of both the medieval and modern period were educated or born, including Ibn Khaldun (the historian considered the founding father of sociology), the Jewish philosopher Maimonides, and the great feminist thinker Fatima Mernissi, who died earlier this month.

“I have a question,” one female student asked me. “Why Islam? Why are Muslims considered the worst by Americans?” This is a question that matters here. The student wore a black hijab. Her face was open and friendly. She looked personally wounded.

Another student followed with a related point: “Most people in the U.S. have guns. Here in Morocco we don’t have guns. We are peaceful.” The students nodded and seemed distressed that they might be thought otherwise.

The exceptional reach and uncontrolled speed with which the worst of our cultural products spread means that the ideas by which America was attractive during the last century are no longer reflective of the present one.

In the past decade and a half, there has been a seismic change in the way people in Muslim majority countries of the Middle East and North Africa understand American culture. Perceptions of the U.S. as a fair political broker in the region have plummeted since the invasion of Iraq in 2003 and the long occupation punctuated by public relations disasters like Abu Ghraib and drone attacks gone wrong.

Add to that how such news is amplified in the digital age. The profound changes in the way people access information and popular culture has accelerated the movement of all forms of popular culture, and altered the context for what has been called America’s soft power.

My journalist friends remind me of the old trade adage about news: “If it bleeds, it leads.” Accordingly, none of the Fez students were aware of President Barack Obama’s Oval Office address reassuring the world that Islam was not the enemy. They also were much less impressed by the outcry against Trump’s proposal from American politicians and commentators from across the political spectrum.

Over the 22 years I have been traveling to or living in Morocco, many here have proudly told me that theirs was the first nation to recognize the sovereignty of the U.S. Morocco sent troops to fight alongside the U.S. in the 1991 Gulf War and have been partners in the so-called war on terror. Many young Moroccans have told me that they aspired to live in America and asked my help. But the historic friendship is deeply strained.

“What’s distressing is not so much the comments Trump is making, but the response he is getting,” a history professor said to me as we walked across the campus of Al Akhawayn University in Ifrane the next day. “It seems not to be so outrageous to Americans that he might say these things. The response is that it is extreme, but not outrageous.”

From outside the perimeter of our own self-perceptions -- which often temper our responses to even the outrageous comments of Trump -- American culture is a lot less subtle than it sometimes appears from within.

In 2012, a low-budget film made by an obscure Egyptian Christian living in Los Angeles and his partner, a former pornographer, was the most influential cultural export from the United States. Even though it had been screened only once to an audience of 10 people, when it appeared on YouTube in an Arabic version, “Innocence of the Muslims” sent shock waves around the world and led to massive protests outside U.S. embassies in many Muslim majority countries.

In the late 1980s, Joseph Nye described how culture could be a form of soft power, coercive by its very appeal. Since Sept. 11, 2001, many in the State Department have engaged in what they call cultural diplomacy to help convince Muslim hearts and minds that the U.S. is a tolerant and charismatic nation, employing American “soft power” as a persuasive tool. This is essentially a continuation of the logic by which Henry Luce called for an “American century,” in his well-known 1941 essay by that name in which Luce argued that the international reach of American culture could have a positive benefit for the United States geopolitically.

But in the digital age, the American century has turned against itself. And the exceptional reach and uncontrolled speed with which the worst of our cultural products -- from the cheap and hateful “Innocence of Muslims” YouTube video to the latest barrage from Mr. Trump – reach the world and overwhelm the best, means that the ideas by which America was attractive during the last century are no longer reflected in the present one.

Brian T. Edwards is Crown Professor in Middle East Studies at Northwestern University, where he is also director of the program in Middle East and North African studies. His new book “After the American Century: The Ends of U.S. Culture in the Middle East” has just been published by Columbia University Press.