Beyond Mike Brady: Finally, stepfathers are getting their pop culture moment

From "Modern Family" to "Ant-Man" to the new Will Ferrell-Mark Wahlberg comedy "Daddy's Home," stepdads abound 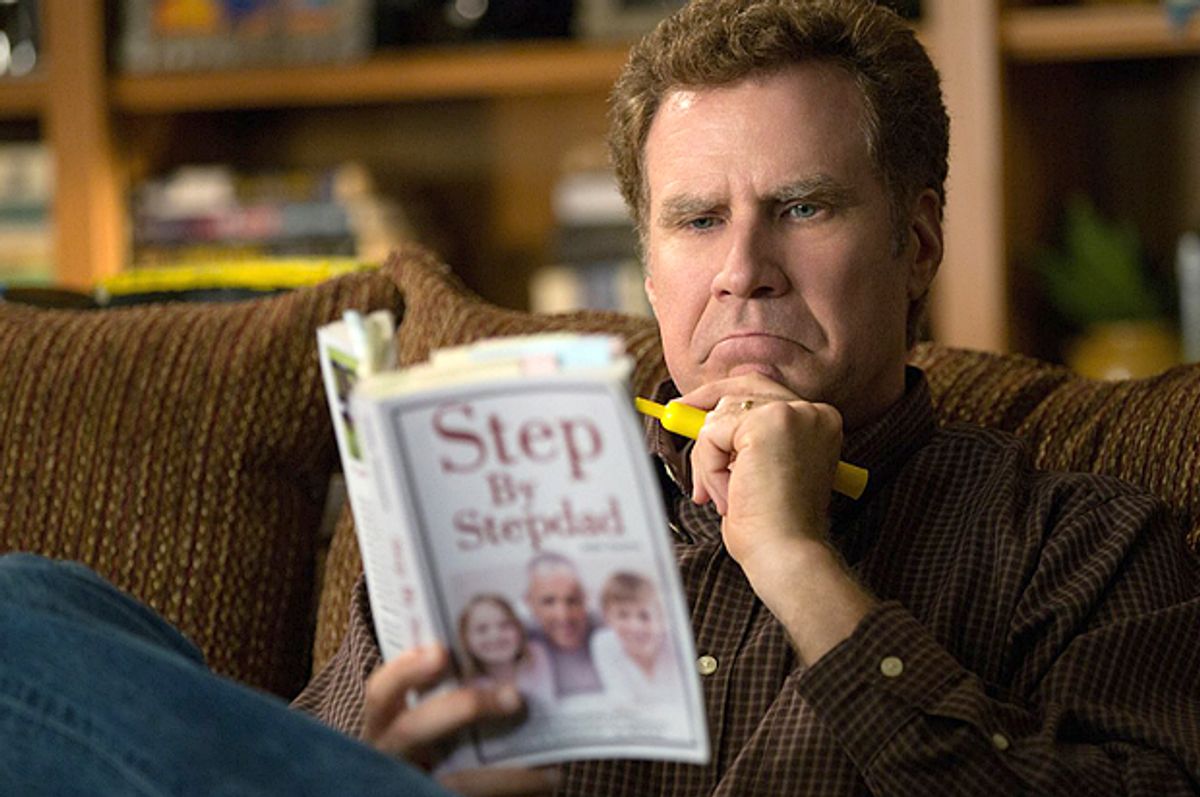 Are stepfathers finally about to have their cultural moment? If so, it’s richly deserved. Let’s be clear, right now isn’t that moment, but changes in the popular consciousness often happen one movie character, one TV relationship or one viral video at a time. The Will Ferrell comedy “Daddy’s Home” (tagline: “It’s Dad vs. Step-Dad”) arrives in theatres Christmas Day. While I can’t yet call it a victory for the millions of guys raising stepchildren — early reviews have not been kind — the movie is the latest in a series of tentative signs that Hollywood may finally be ready to give these men their due on screen.

Stepfathers are nothing new, of course. George Washington was one. Jesus had one. But in our popular stories, they’ve held a tenuous place at best. While stepmothers have to deal with their own wicked stereotypes, stepfathers' typical screen depictions range from moron to molester to maniac.

Sure, there are exceptions. Liam Neeson is a loving stepfather/widower in “Love, Actually.” Dwayne Johnson brings both heart and pecs to the role of stepdad in “Journey 2: The Mysterious Island.” And of course, there’s the Godfather of stepfathers, Mike Brady, who brought up his bunch of three biological sons along with stepdaughters Cindy, Jan and Marcia, Marcia, Marcia.

Worth noting about these fictional stepdads: by and large, they married widows or their wives’ ex-husbands stayed conveniently off-camera. This contrasts with reality for millions of blended real-life families, but not so many on-screen, at least until extremely recently.

Case in point: “Ant-Man,” – yes, “Ant-Man.” For much of the movie, Scott/Ant-Man (Paul Rudd) clashes with his daughter’s stepfather, Paxton (Bobby Cannavale). But at the end, Paxton joins him to protect Scott’s daughter Cassie (Abby Ryder Fortson) from – oh, don’t make me explain – the point is, shortly before the credits, Paxton, Scott, Cassie and Scott’s ex-wife Maggie (Judy Greer) have an amiable dinner together. The two men express genuine respect and appreciation for one another. Then:

SCOTT: This is awkward.

Then they all coo over a video of Cassie doing cartwheels. I won’t claim to be a scholar of the stepfather in TV and cinema, but I’ve logged my share of screen time and when has that ever happened – where father and stepfather both, in a sense, help each other win?

My family never evolved that far. I didn’t meet my biological father until I was 18. (In my two-father family, I call my biological one by his first name – Jimmy – and my stepfather Dad.) The two of them stood face to face for the first time when I was maybe 20, and it was agony. We smiled so hard it was painful, especially after Jimmy made a joke about being taller than Dad.

Years later, at my wedding, Dad had his camera and wound up taking a picture of Jimmy and me. My dad’s a decent photographer, but somehow that picture wound up out of focus – and Jimmy’s head was cut off.

That’s why the tension between Jay (Ed O’Neill) and Javier (Benjamin Bratt) on “Modern Family” feels so familiar. Jay and Manny (Rico Rodriguez) have what may be the sweetest stepfather-stepson relationship on TV. Their affection for and exasperation with one another feels rich and genuine, and I love the episodes where Manny gets a visit from his father, Javier. Manny adores his dad, despite the fact that Javier is impetuous and unreliable. And Javier and the much older, stodgier Jay grudgingly accept one another’s presence. Javier even says at one point, “Maybe it’s a good thing that (Manny) has the two of us.”

In one of the show’s signature segments when a character speaks directly into the camera, Jay characterizes their relationship this way, “I don’t owe this guy anything. He stops by a couple of times a year to see his kid. It used to be a relief, give me a nice break. Now, Manny and I, we got our own thing. I know I’m not his dad. Maybe I don’t like to remind him.”

“Daddy’s Home,” plays this dynamic for broader laughs. The ubiquitous trailers (the movie had a bigger TV ad-spend than "Star Wars: The Force Awakens") show good-hearted stepdad Brad (Ferrell) getting decidedly out-butched by his motorcycle-riding ab-crunching rival Dusty (Mark Wahlburg). Brad can’t ride or skateboard. He and his wife (Linda Cardellini) are having trouble conceiving and when he tries to punch Dusty, he only hurts himself.

Laura Tropp teaches communications and media at Marymount Manhattan College and is co-editor of the new book “Deconstructing Dads: Changing Images of Fathers in Popular Culture.”

Underneath that, perhaps, is the notion that people see stepfathers as caretakers of another man’s child, and Tropp says, “caretaking is traditionally seen as womanly work.”

I’m not claiming “Daddy’s Home” is going to be revolutionary, but I think its appearance this year does mean something, particularly given how rare stepfather characters are on screen. According to the Pew Research Center, 16 percent of American children are living in blended families, and that number’s been steady for more than 20 years. And yet, stepfathers are relatively rare on screen, and the social and academic research on them isn’t terribly robust, either.

It’s as if we have a kind of cultural blind spot for the stepfather, even though everybody knows one, was raised by one or is one. In fact, I feel strangely disloyal to my Dad, even now, by referring to him as my stepfather, a word we never used. (He did legally adopt me when I was 5.) It’s as if the term, despite its strict accuracy, is somehow diminishing to him and his role in my life. But why?

University of Florida sociologist William Marsiglio has written extensively about stepfathers and says that at a conceptual level, adding the prefix step- suggest some lack of authenticity. “Just like we have negative views about hand-me-down clothes and used cars, stepfathers are (often seen as being) less than the ideal.  It’s consistent in many respects with our desire to want the ‘real’ thing—whatever that thing may be.”

Hmm. I’ve always hated the term “real dad” or “real father” – what does that mean, anyway? I’m not saying DNA doesn’t matter. For whatever reason, it does. But how much?

Ron Deal is a marriage and family therapist and author of “The Smart Stepdad” and other books. He says the comedic competition Brad and Dusty stage for the children’s love is a terrible idea in real life. “It takes a tremendous toll on the well-being of the children,” he says. Plus, in general, kids will choose their biological dad. Still, “stepchildren who have a good relationship with both their father and stepfather have better outcomes than children who don’t.”

If Brad and Dusty were real people, Deal would tell Dusty, “Give your children permission to like, love or at least get along with their stepfather.” Convince them they don’t have to automatically reject their stepfather out of loyalty to their dad.

And for Brad? “Let him know that you’re not trying to replace him, that you’ll always respect his relationship with his children.”

If Deal’s right, many of us could take a lesson from Ohio’s Todd Bachman and Todd Cendrosky. In a September wedding, Bachman was walking his daughter Brittany Peck down the aisle when he paused and extended a hand to Cendrosky, her stepfather, who joined them. The three walked together arm in arm in arm toward the altar and, apparently, into our hearts. The photographer’s Facebook post featuring their pictures and story was viewed more than 70 million times and earned coverage from the New York Times, USA Today and the Today show, among many others. (“Daddy’s Home” should be so lucky.) Cendrosky told a TV reporter, “He grabbed my hand and said, ‘You’ve worked just as hard for this as I have. You deserve this just as much as I do.’” The shot of the two men holding hands, tears forming in stepdad Cendrosky’s eyes, is hard to forget.

The woman who took that picture, Delia D. Blackburn, described the moment in terms that ring true for stepfathers and everyone else emerging from various cultural closets and cul-de-sacs into a world where sperm donors, surrogate parents, transgendered parents and gay marriage and adoption have all upended the traditional restrictions of what it could mean to be somebody’s parent or child.

“Families,” she wrote, “are what we make them.”