Breaking down the "Bro country" walls: The year country music's women fought back against "take females out"

From Maddie and Tae to Little Big Town and Kacey Musgraves, they're shaking up Nashville's dudebro status quo 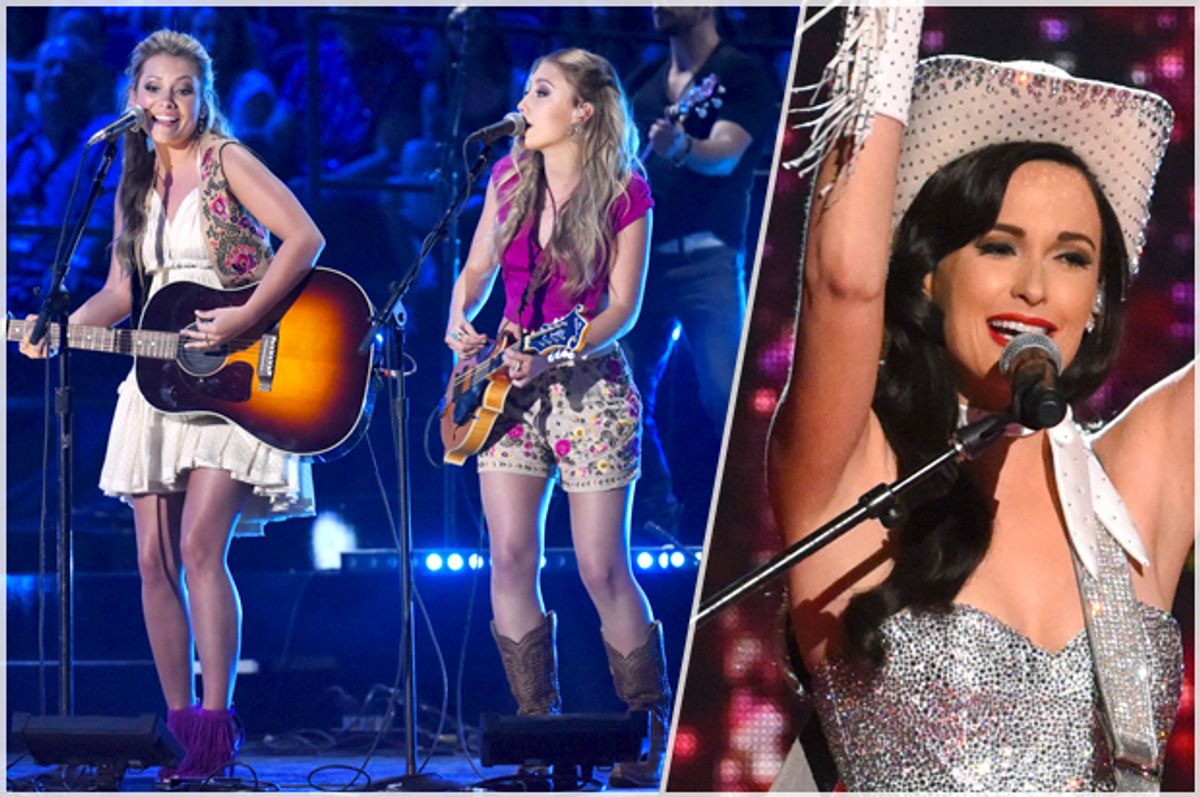 It must have been fate that “Tomatogate” would happen in the same year that women inadvertently kicked down the doors of the boys club that is country music. Earlier this year, esteemed radio consultant Keith Hill walked into a firestorm when he suggested in an interview that country music radio stations must limit the number of women on the airwaves in order to both appeal to their listeners and be profitable. His directive was quite simple: “take females out.”

The backlash from artists and fans alike made “Tomatogate” one of the biggest scandals in recent country music history. Female artists like Lee Ann Womack, Miranda Lambert, Maddie & Tae and Martina McBride responded quickly to the insult, and were quick to note that some of country’s most legendary (and successful) artists have always been women. Despite the scandal, this outcry was particularly tone-deaf when you consider exactly how much women in country music accomplished this year.

There is no disputing that country music has long been fighting a “war on women,” to use the New York Times’ words. But in 2015, a slew of hyper-talented female artists made it damn near impossible for everyone from critics to radio DJs to refuse to pay attention to their contributions. This year, women in country music grabbed the proverbial microphone and refused to give it back. 2015 was the year of the woman in country music, and that has incredible implications for country music as a whole and for the women who make all types of music.

To be sure, the biggest successes for women in country music came this year from artists that few people had heard of before 2015. Mickey Guyton became the first African-American woman to make real waves on the charts in well more than a decade, shattering records when her debut single “Better Than You Left Me.” With “Love Me Like You Mean It,” Kelsea Ballerini became the first woman to top the Billboard Country Airplay chart with a debut in nearly a decade.

Continuing that trend, Cam, Maddie & Tae, Kacey Musgraves and a host of other up-and-coming female artists joined genre mainstays like Miranda Lambert and Carrie Underwood to elbow their way into the conversation about this perpetually male-dominated music. And most of these artists did it without the industry support – radio airplay, namely – that their male counterparts enjoyed. In doing that, they were able to forcibly change the tone of country music in a broader sense.

The “bro” domination has, to varying degrees, had a host of negative impacts on female artists. In addition to the oversexualization and overt sexism inherent in many of the genre’s most popular songs over the past few years, it’s also been markedly more difficult for female artists to find their way to the top of the charts. As a 2015 analysis of the Billboard charts found, female artists comprised only 8 percent of all charting singles in 2014, down from (an also paltry) 16 percent in the mid 1990s. In bringing a more feminine perspective to the charts in 2015, female artists have been able to dramatically change the conversation. This year, there were fewer songs about beer, trucks and T&A, and more independent ballads like Maddie & Tae’s “Shut Up & Fish.”

The most popular country song of the year was arguably Little Big Town’s “Girl Crush.” The track, a sort of “love song” to an ex-lover’s new flame, stayed at #1 on the Billboard Hot Country chart for more than 11 weeks. It also had an impressive performance on the pop charts, and has since been nominated for consideration as Song of the Year at the 2016 Grammys. Despite the minor controversy that surrounded “Girl Crush,” it quickly became the most universally beloved country song of 2015.

With this track, Little Big Town also raised important questions about the place of female sexuality in the genre, and for a change, made a female voice the most dominant in the country conversation. The tone is gradually changing in country music, drifting away from the hyper-masculinity that made bro-country a household term and toward a more inclusive lyrical aesthetic. Maddie & Tae’s “Girl in a Country Song” once again made it okay for women to poke fun at the dominant narrative.

It’s also worth considering that it has been the women in country music over the past year who have brought the genre its widest acclaim from people who otherwise think that country music is terrible, namely music critics who happily ignore these albums. Releases from Lindi Ortega, Kacey Musgraves and Lee Ann Womack have helped spotlight the more authentic, traditional country sound that represents the genre at its best. With that, everyone from the New York Times to SPIN to National Public Radio began to take notice.

In 2015, country music was also more inclusive than ever, as Mickey Guyton and Lindi Ortega brought more diversity both in sound and in demographics. There is still an incredible amount of work to be done in ensuring that women of all races, sexualities and identities have a place in country music, but at this point talented women are going to find their place in country music, via social media and YouTube and Spotify, even if the label executives and radio DJs take another decade or so to catch on to the very real fact that when there are more women (particularly women of color) in country music, country music is better.

Stylistically, the presence of more women in country music means only good things. When women dominate country music, the genre is inarguably better. From Tammy Wynette to Terri Clark to Ballerini, women in country have always had to work harder and produce better music than the boys to get on the charts, much less hit #1. Even Luke Bryan, king of the bro-country phenomenon, has acknowledged as much. “They kind of have to be able to hang with the guys,” he told Entertainment Weekly last year. “But also be feminine and pretty.”

As disgusting as that double standard truly is, the one benefit is that the music produced by women in country music decidedly makes the genre better. That’s proven by history – Musgraves’ authentic ’50s aesthetic alongside Brandy Clark’s outlaw persona is just a natural progression of Loretta Lynn singing about birth control to Reba McEntire recording a country song about the AIDS epidemic. The same could be said for country’s aesthetic, too. As much credit as Sturgill Simpson and Chris Stapleton get for returning country to its classic roots, let’s not forget that Musgraves and Alison Krauss and Mary Chapin Carpenter have always exemplified the traditional sound.

Women’s rise in country music has a lot of broader implications. As the success of “Girl Crush” demonstrated, the lines between pop and country are more blurred than they’ve ever been. Compare that to the crossover success of Florida-Georgia Line’s “Cruise,” and it’s pretty obvious who most fans of the genre would rather have as its ambassadors. Instead of spilling over these archaic notions about women and overt objectification into pop music, there’s a newer, more progressive country sound that will have a great deal of influence on what pop-country sounds like in the future.

Perhaps even more important than that, it’s impossible to ignore the sheer numbers of women who listen to country music. Of the more than 95 million Americans who listen to country music regularly, 52 percent are women who have been deprived of hearing female voices on the radio whilst being bombarded with sexist lyrics. This is a genre that reaches an incredible amount of women each year, and when there are more women on the radio, that means there’s less room on the airwaves for misogyny.

There is also still an incredible amount of work to be done in terms of representation. Country music needs more women, period. There need to be more women at the record labels, on the radio and on the charts. The perspectives and voices and stories of women need to be valued more by the industry. The industry needs to stop profiting from sexism and the marginalization of women. In 2015, though, women in country demonstrated that they are committed to making these changes a reality.

To be sure, the tide is changing in country music. 2015 was the year that women in country music became more than just a garnish in some sexist salad. This is a change that artists, critics and fans have been begging for since long before the bro-country takeover.