Bernie does what GOPers won't: Unlike chicken Republican candidates, Sanders not afraid to hammer Trump

Sanders calls out Trump for having no plans to help working class. The Donald responds in usual way: with lies. 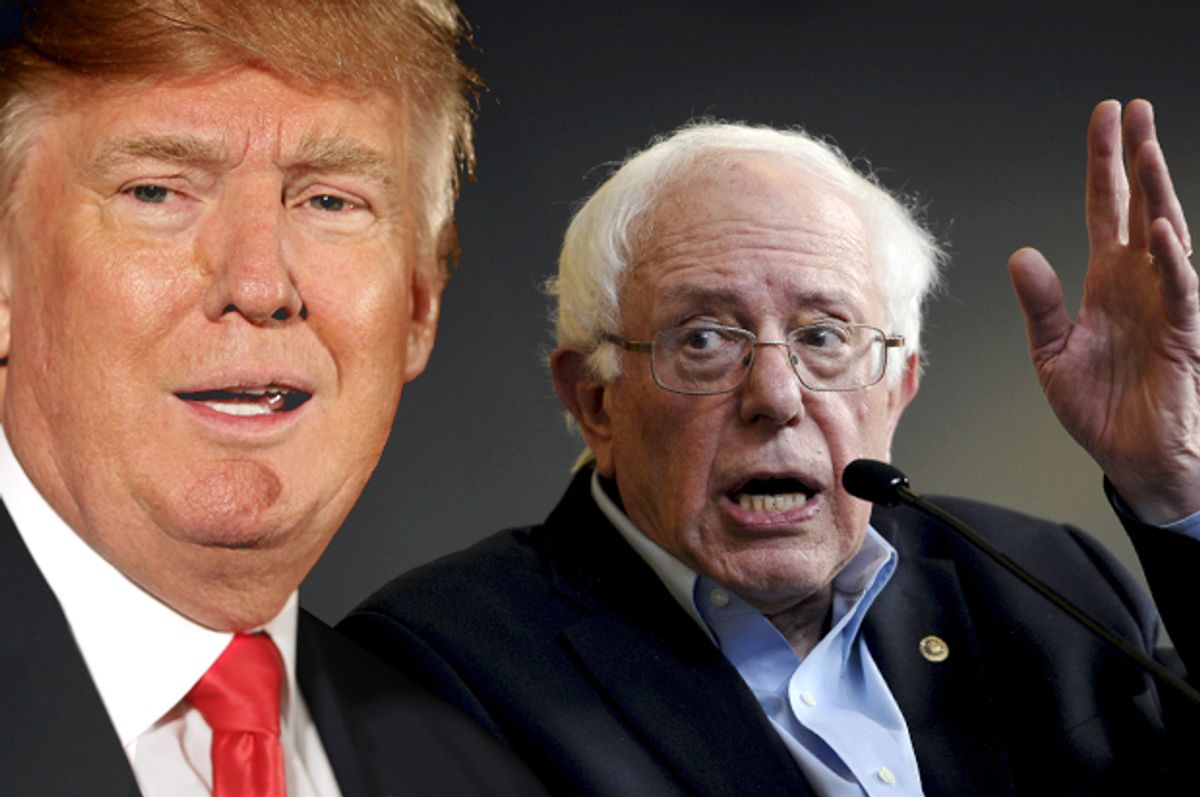 On CBS' "Face The Nation" this weekend, Bernie Sanders made an obvious but important point about Donald Trump: When you cut through the bombast and the xenophobia, Trump's campaign offers nothing to the working-class conservatives who support it. As I wrote a few weeks ago, “Most Trump supporters, if they weren’t blinkered by racism, would be supporting someone like Bernie Sanders, who actually represents their economic interests.”

On "Face The Nation," Sanders addressed this directly to host John Dickerson:

“Trump’s supporters are working-class people and they’re angry, and they’re angry because they’re working longer hours for lower wages, they’re angry because their jobs have left this country and gone to China or other low-wage countries, they’re angry because they can’t afford to send their kids to college so they can’t retire with dignity. .... Meanwhile, interestingly enough, John, this is a guy who does not want to raise the minimum wage. In fact, he has said that he thinks wages in America are too high. But he does want to give hundreds of billions of dollars in tax breaks to top three-tenths of one percent. So, I think for his working class and middle class supporters, I think we can make the case that if we really want to address the issues that people are concerned about why the middle class is disappearing, massive income and wealth inequality in this country that we need policies that bring us together that take on the greed of Wall Street, the greed of corporate America, and create a middle class that works for all of us rather than an economy that works just for a few.”

It was encouraging to see Sanders tackle this head-on. Trump is skating through a Republican primary without presenting anything resembling a solution or policy. He remains an empty vessel onto which angry white people can project their working-class resentment. More importantly, Trump has become a populist champion for blue-collar whites and no one on the Right has noted the obvious contradictions girding his campaign.

Predictably, Trump didn't handle Sanders criticism well. He quickly took to Twitter to lash out at Sanders: “@BernieSanders – who blew his campaign when he gave Hillary a pass on her e-mail crime, said that I feel wages in America are too high. Lie!”

Not that the facts matter to his supporters, but Trump is lying here, and the video proves it. At the Fox Business Network debate, Trump said the following in response to a question about raising the minimum wage:

I doubt Trump will respond meaningfully to any of this, but it’s pretty clear that Sanders is getting under his skin. Trump walked right into the trap Sanders set for him, and now he has to lie his way out of it. Unlike the Republican candidates, Sanders is liberated enough to attack Trump without fear of a backlash.

Many of the GOP candidates have been slow to unload on Trump, mostly because they’re wedded to a conservative base that loves him. Cruz and Carson, for example, have been cautious not to offend the Trumpites, lest they lose their outsider appeal. Mainstream Republicans like Rubio and Christie have been gradually more vocal in their condemnations, but only after it became obvious that Trump wasn’t going anywhere. Jeb Bush has emerged as one of the Donald’s harshest critics, but Jeb spent months squeamishly avoiding such a confrontation. It wasn’t until Bush was essentially out of the race that he found the courage to denounce Trump.

Sanders, though, is empowered by the fact that he doesn’t have to appease the rabid Republican base. He’s free to call Trump a fraud and a shill for the billionaire class, which the GOP dutifully represents. Not a single Republican candidate could respond as Sanders did to Trump’s lie:

“Donald Trump says that I’m a liar because I said he believes wages in America are too high. Really?…It appears that Mr. Trump is getting nervous that working families are catching on that his policies represent the interests of the billionaire class against almost everyone else. He refuses to support raising the minimum wage. He believes wages are too high, and he wants to provide hundreds of billions of dollars in tax breaks to the very richest families in America. That’s not an agenda that ‘makes America great.’ It’s just another Republican billionaire wanting to make the very rich richer at the expense of working families.”

It will be interesting to see if Sanders continues his attacks on Trump. So far Trump and the Republicans have avoided talking about Sanders, focusing on Hillary Clinton instead. But Sanders can force the leading GOP candidate to engage him by publicly unmasking his con. If Trump’s slapdash response to Sanders this weekend is any indication, Sanders may be uniquely capable of rattling Trump.