Conservatives love to tout their economic bona fides. But the data reveal a far different story 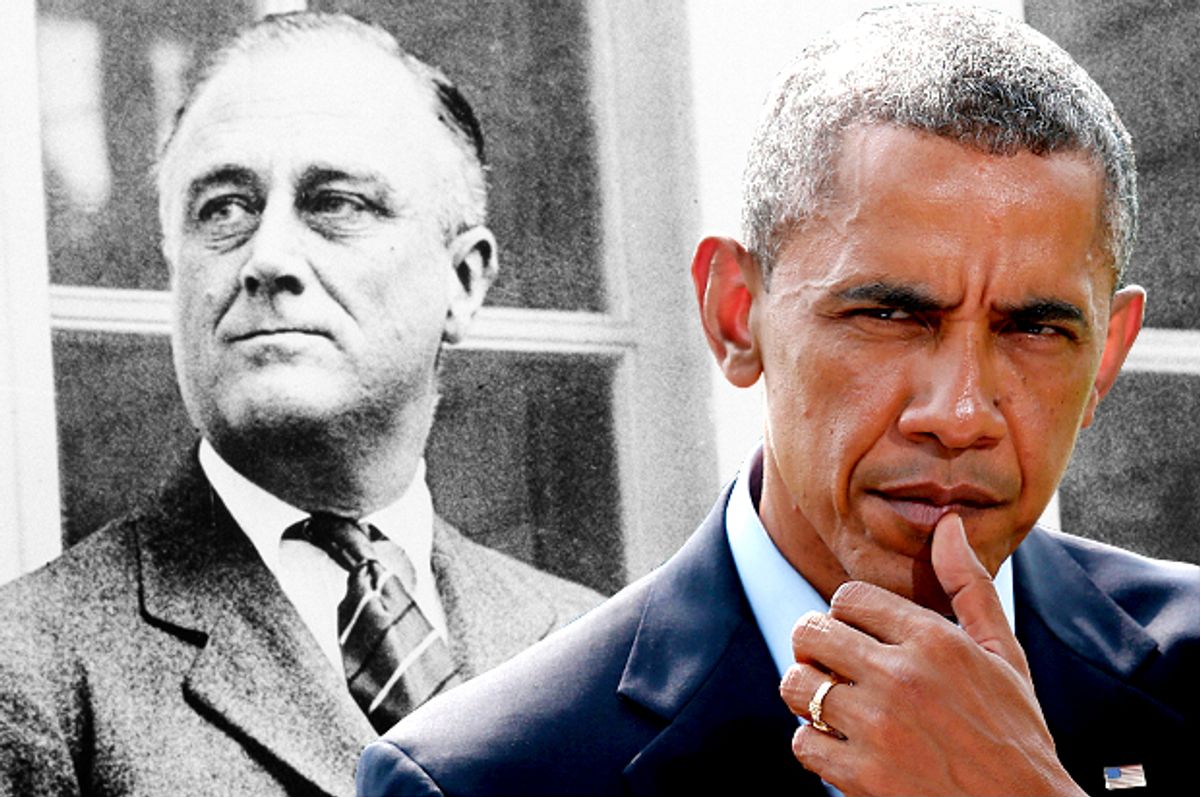 As the 2016 election cycle heats up, the key question at stake for most Americans is economic growth and jobs. The debate, then, will center around what to do with the fragile recovery that overwhelmingly benefits the rich; the stagnation of middle class incomes; and unemployment -- which, particularly for young people of color, remains dispiritingly high.

The right likes to argue that these conditions mark a clear failure of progressive policies, and in particular of the Obama administration. In the process, they reject policies that have, however imperfect, unequivocally strengthened the economy over the past seven years, such as the stimulus packages that came in response to the economic crisis.

Meanwhile, while conservatives often claim that their policies are good for the middle class, systematic studies by economists, political scientists and sociologists suggest these claims are overblown.

At the heart of the question is economic growth: Which party is better at delivering it?

While economic growth alone is not sufficient for middle class and working class income growth, it is certainly necessary. The most systematic investigation of how parties affect economic growth was performed by economists Alan Blinder and Mark Watson. Their results are unequivocal:

“The U.S. economy has performed better when the President of the United States is a Democrat rather than a Republican, almost regardless of how one measures performance. For many measures, including real GDP growth (on which we concentrate), the performance gap is both large and statistically significant.”

The chart below shows the gaps in various indicators between Republican and Democratic presidents. Democratic presidents average 4.35 percent GDP growth, compared with 2.54 percent under Republicans. Democrats also presided over a lower unemployment rate, higher stock market returns, higher corporate profits, higher compensation growth and higher productivity increases. These results remain even after various controls are applied. Though the authors want to chalk these results up to luck, I have outlined a few reasons to suspect other factors may be at work. The middle and working class have increasingly fallen behind as the richest Americans have seized a larger share of income and wealth. So while economic growth is certainly important, how it’s distributed is important as well.

In a 2004 paper and a further analysis earlier this year, esteemed political scientist Larry Bartels has demonstrated that income growth is faster and more equal under Democratic presidents. He cites differences in policies like the minimum wage driving this gap. As he notes, the real value of the minimum wage increased 16 cents a year under Democrats, but decreased by 6 cents a year under Republicans.

The chart below suggests this effect is driven by both market conditioning (see the gap in pre-tax income at the bottom) and redistribution (the post-tax gaps across the board). Bartels' analysis is strengthened by a recent study from political scientists Elizabeth Rigby and Megan Hatch, who identify three major policies that states can pursue to slow growing inequality: higher taxes on the wealthy, lower taxes on the poor, and labor market policies that benefit workers (minimum wages, lack of right to work). They find that if states had adopted more liberal policies, the increase in inequality (as measured by the Gini Coefficient) would have been 60 percent smaller — and the share going to the top 1 percent would have been cut in half.

At the state level, political scientists Anne Case and Timothy Besley find that Democrats boost spending and taxes, particularly in the areas of worker’s compensation and family assistance. Studies of the Medicaid expansion have overwhelmingly shown that Republican control of government is among the most important factors in predicting whether a state will expand Medicaid. Given the positive economic and social benefits of the Medicaid expansion, this illustrates how conservative ideology can hamper good governance. More recently, political scientists Christopher Witko and Nathan Kelly discovered that when economic growth is low, liberal and conservative governments perform similarly with regard to unemployment. However, when growth increases, Democrats do a better job turning that growth into lower unemployment. Further, in another study, they find that state-level outcomes have played an increasingly important role in shifting the income distribution, meaning that these effects are even more meaningful.

In a new book, "Welfare for the Wealthy," political scientist Christopher Faricy shows that the rise of tax subsidies as an alternative to direct public spending -- a shift that Republicans have been eager to push for -- has had the effect of increasing inequality. (see chart) In a recent study, Faricy finds that parties don’t use the tax code in the same way: Democrats favor tax credits, which help the poor, while Republicans favor tax deductions, which benefit the rich. The effect is powerful:

“A switch to a Democratic president produces an immediate increase of over $83 million in the level of tax credits.”

A study by economist Howard Chernick finds that at the state level, “Party control by Republicans is associated with a more regressive tax structure.” Economist Olivier Bargain and others find, “tax reforms passed by Republican governments had a positive effect on the income shares of taxpayers in the top quintile, whereas Democrats targeted the bottom 80 percent of the income distribution.”

People of color make up an increasingly large share of the middle and working class. In the past, as historian Ira Katznelson notes, government policy favored white upward mobility and left people of color behind. And a recent study by political scientists Zoltan Hajnal and Jeremy Horowitz finds that there is even now a large partisan gap in who policy benefits. They find that under Democratic presidents black poverty declined by 38.6 percent, while it grew by 3 percent under Republicans. They find that

The authors also examined Latinos, though the data were available for fewer years. They write,

Further, they find deep gaps in income growth between Democrats and Republicans, with all racial groups seeing far faster gains under Democrats than Republicans, though Republicans still ensure whites gain the most (see chart). Economic policy dramatically affects presidential races. A recent study had a bombshell finding: Federal reserve policy benefitted Republicans by reducing interest rates before elections when Republicans control the White House, but hiking them when Democrats do. The authors write,

“The behavior we have observed is consistent with the possibility that the Fed seeks to aid the election and reelection of Republican presidents.”

This dynamic was noted by Bartels in "Unequal Democracy," where he found that economic growth was slower during Republican presidencies, but the gap closed in the last year before elections. Ironically, then, Democrats gain very little in terms of electoral victories because of their superior economic management.

In addition, as I’ve noted, factors like low turnout, the rise of the donor class and globalization make it harder for progressives to shift the income distribution.

Two new studies of finance show that Democrats have shifted to the right on financial deregulation, dramatically increasing inequality. (One of the studies links campaign contributions to Dodd-Frank roll call votes.) A study by political scientists Alexander Hertel-Fernandez and Theda Skocpol finds that the rise and mobilization of the small-business lobby has divided Democrats on tax issues. Further, a study by a group of political scientists notes that the strong status quo bias, exacerbated by conservative obstructionist politics, makes it increasingly difficult to implement inequality-reducing policies.

The results of a broad range of studies are clear, then: Progressive policies are better for economic growth, better at creating a racially equitable society, better at strengthening the middle class and better at reducing unemployment.

However, progressives must still grapple with the constraints imposed by globalized markets, the declining strength of organized labor, the rise of the donor class and low voter turnout. But the arguments that conservative policies are beneficial to the working class, or that there isn’t a dime’s worth of difference between the two parties, are difficult to square with the research.