Hey, it was the 1960s. Sanders smoked pot but avoided the drug culture -- and also Vietnam 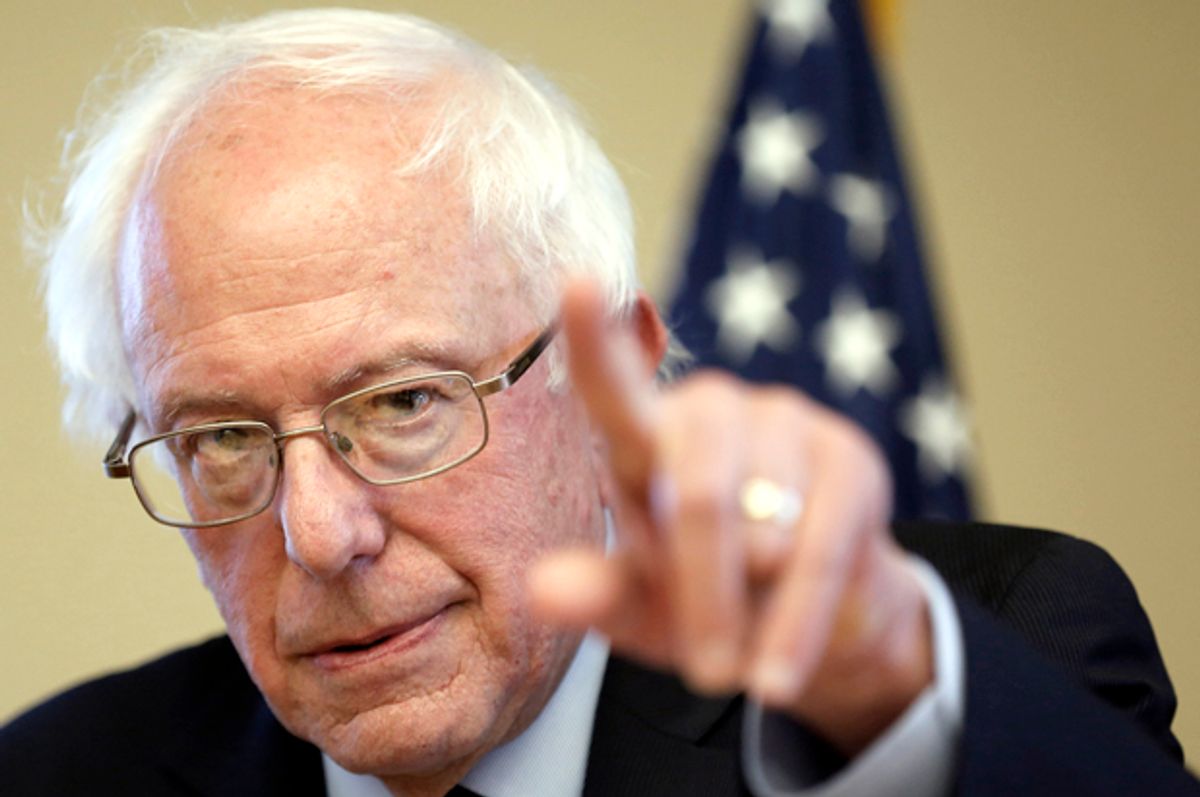 In the spring of 1966 Steve Slavin joined a pickup basketball game on a playground in Greenwich Village. Who should show up but Bernie Sanders, his old friend and roommate from Brooklyn College. He was the same lanky kid with a decent jump shot and aggressive moves under the basket, but his hair had grown long. The curly pile of black ringlets stood out in what was called a “Jewfro”—the Jewish version of the Afro hairstyle popular among Black Power leaders like Angela Davis.

Slavin had been in the army and had lived in Atlanta for a short time; now he was back in New York. He asked Sanders what he was up to.

“I own some land in Vermont,” Sanders replied.

One summer after he graduated from the University of Chicago Sanders had paid $2,500 for eighty-five acres in Middlesex, a small town a few miles north of Montpelier, Vermont’s capital. Slavin figured Sanders bought the property with his Bar Mitzvah money, along with some wedding cash. He also received a small inheritance from his father, who had died in 1963.

Sanders lived most of the year in New York, but he summered in Vermont. In the city Sanders bounced from job to job: he taught preschoolers for Head Start and worked as an aide at a psychiatric hospital. Around this time, early in the Vietnam War, Sanders applied for Conscientious Objector status, according to the Russell Banks profile. The only way to obtain CO status at that point was on religious grounds of opposition to all war. “There’s nothing about being Jewish that says you can’t shoot a gun,” Sanders told Banks. His deferral was denied—after a series of hearings, an FBI investigation and numerous hearings, according to Banks—but by that time he was 26 and too old to be drafted.

The Vermont property was a hilltop meadow surrounded by woods with an old, run-down shack where farmers used to boil sap down to maple syrup. With no power and no running water, it was a step above camping out. “It was just fantastic,” Sanders told Russell Banks in his Atlantic interview. “I mean, I grew up in a three-and-a-half-room apartment, never owned a damn thing, and owning a piece of land I could walk on was just incredible! This brook is my brook! This tree is my tree!” He found work researching property records for the Vermont Department of Taxes. For a time he registered people for food stamps at a nonprofit called the Bread and Law Task Force. A steady job was hard to find.

One summer Sanders brought three African American kids from New York to spend a couple of weeks in Vermont. It was his version of a Fresh Air Fund escape from the city. The problem was that there wasn’t enough room in the sugar shack for Sanders, two boys, and a girl. He desperately needed to add space, or at least extend the roof so they had a simple shelter for a kitchen and dining room. Sanders wasn’t much of a carpenter; fortunately he soon got help from an old friend who had grown up on a farm and knew his way around construction.

Jim Rader had left Chicago and moved to Plainfield, Vermont, where his wife could finish her degree at Goddard College. The alternative college was a free-for-all gathering place for hippies, searchers of truth, and anyone seeking a different approach to higher learning. One day Sanders ran into Rader’s wife on campus. They reminisced about their activist days in Chicago.

“We renewed our friendship very easily,”says Rader.When Sanders related his construction woes, Rader helped him buy the lumber and extend the roof into a decent overhang. “At least it was a place where they could cook and eat.”

Meanwhile Sanders’s marriage to Deborah had frayed. When Michael Kruse, working on a profile of Sanders for Politico, asked the senator’s office staff about the first marriage, his press person said, “She got a Mexican divorce is what I was told.”

Sanders started a relationship with Susan Campbell Mott, whom he had met in New York, according to Kruse. They lived together in New York and Vermont, but not on the Middlesex land. In March 1969 Sanders bought another piece of property in the tiny town of Stannard, population 200, in a remote corner of Vermont known as the Northeast Kingdom. Kruse reported that a few days afterward Mott gave birth to Levi Noah Sanders in St. Johnsbury, twenty miles down the road and the nearest city with a hospital.

Mott and Sanders never married, but they lived together for several years and cooperated in raising their son.

In Vermont during the hippy years of the 1960s and 1970s, relationships were perishable. For many of the young newcomers to the Green Mountain State, matching up, rematching, and mating were not only accepted; they were approved. Stephen Stills released the hit song “Love the One You’re With” in 1970, but Vermont hippies were putting that into practice a decade earlier. Having a child without hewing to society’s expectation that you get married first was not necessarily the norm, but it was neither unusual nor disapproved of. Among his fellow believers Sanders was merely practicing what he had been preaching. After all, he had been advocating “free love” since he read Wilhelm Reich at the University of Chicago, when he had upbraided the administration in print for setting curfews and restricting visitation in the dorms.

Hippies who wanted to go “back to the land” flocked to three places at the height of the movement: Oregon, the Missouri Ozarks, and Vermont’s Green Mountains. The 1960s counterculture movement likewise coalesced loosely into three separate tribes. The free-speech radicals were more purely political; they were centered primarily in Berkeley and at New York’s Columbia University. They demanded the freedom to protest on campus. In 1964 many joined dedicated civil rights activists on buses to Mississippi to register black voters during Freedom Summer.

The flower children made San Francisco’s Haight-Ashbury famous as a place for hanging out and getting high. When Timothy Leary told crowds in Golden Gate Park in 1966 to “turn on, tune in, drop out,” many hippies adopted his mantra. They were into taking drugs—pot, LSD, and hallucinogenic mushrooms—to expand their minds.

Vermont’s “back to the land” hippies adhered to a slightly different ethos.They subscribed to Mother Earth News and Organic Gardening. The Whole Earth Catalog was their Bible for living, building, growing, preserving, fixing cars, and getting along with fellow hippies. Their ultimate goal was to become self-sufficient. Decades before doomsday “preppers” took to the far reaches of Idaho and prepared for Armageddon, Vermont hippies were going off the grid and creating what they considered to be a purer existence. There was a touch of the Utopian in the lifestyles they were creating.

Writing for Playboy in 1970, John Pollack estimated that there were 35,800 hippies in Vermont, and they accounted for nearly 33 percent of state residents between eighteen and thirty-four. He suggested they could soon take over the state. Governor Deane Davis hastily called a press conference to assure Vermonters that he hadn’t invited all the hippies.

If you take away the Utopian conceit, the hippies were in concert with backcountry Vermont farmers, who were, of necessity, the epitome of self-sufficiency. When their tractors broke down, they had to become mechanics. When brutal Vermont winters blasted their homes, they warmed them with wood they had cut, split, and stacked. They ate from the gardens they tended and dined on the meat of deer they shot, butchered, and preserved. “Vermonters in the 1960s and ’70s were mostly accepting of hippies because Vermonters are anti-authoritarian by nature,” the Vermont Historical Society attributed to the Rutland Herald in 1983, “and traditionally accepting of radical groups and free thinkers.”

Ultimately Vermont farmers just wanted to be left alone. As did the hippies. Once the farmers got accustomed to men with ponytails and women showing up braless in peasant dresses, they found common ground with the newcomers who wanted to go back to the land. They even hired the city kids, who could toss hay bales, feed cattle, and fell trees—for cheap.

Sanders had joined the migration of hippies, searchers, and dreamers to the Green Mountains and moved there permanently in 1968, then bought the land and settled in Stannard the following year. “My hair was long, but not long for the times,” he told Mark Jacobson for a piece in New York magazine in 2014. “I smoked marijuana but was never part of the drug culture. That wasn’t me.”