Lemmy Kilmister lived the ultimate 70 years of sex, drugs and rock and roll

The mythic Motorhead rock star, who died yesterday, seemed indestructible. Keith Richards had nothing on Lemmy 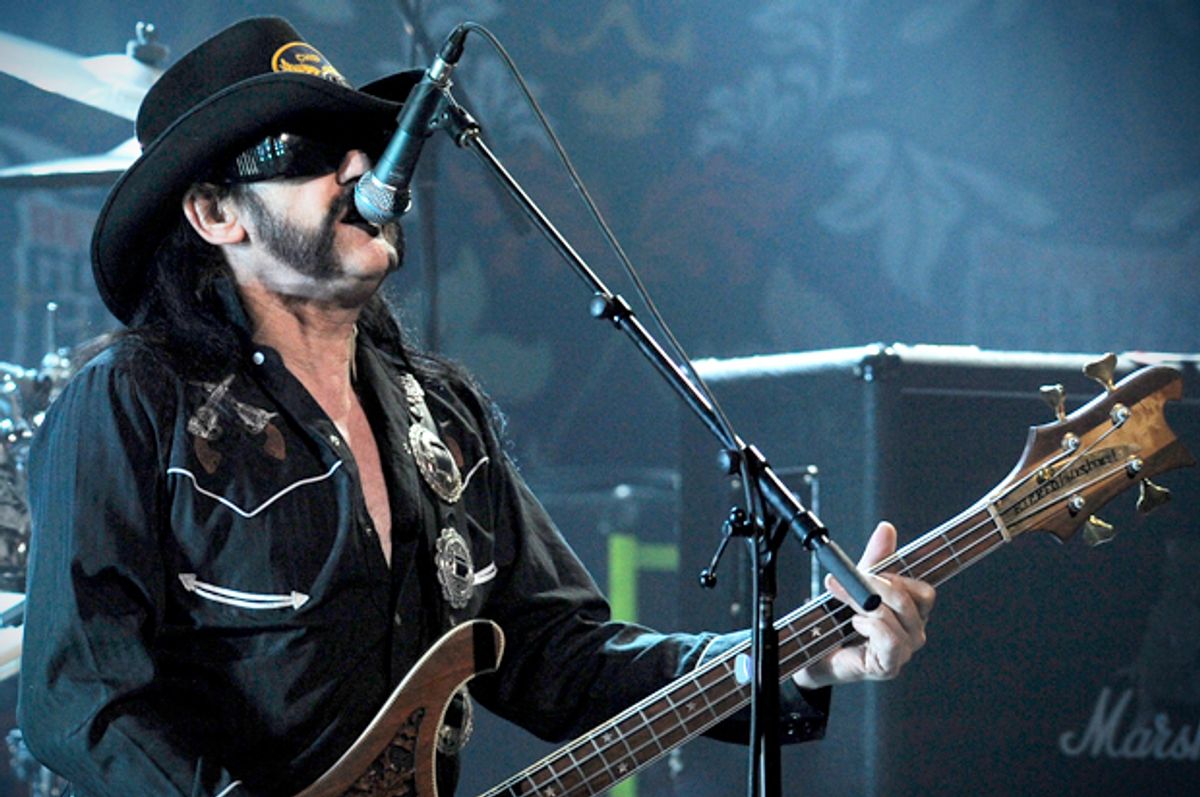 The late Lemmy Kilmister had a personal style and stage persona that was a mythic merger of biker, cowboy, blue-collar bricklayer and military general. In the aptly named documentary on his life, "49 Percent Motherfucker / 51 Percent Son of a Bitch," he explained that professional musicians should look like something from another planet. After all, that is what the audience pays to see and achieve – a conduit and vehicle for an escape into the mental state of fun, ecstasy, and pleasure where fantasy bleeds into reality. The introductory words Lemmy Kilmister used to christen every stage his band, Motorhead, made their own summarizes the synthesis of Hell’s Angel, Doc Holliday, and old-world warlord – “We are Motorhead, and we play rock ‘n’ roll.”

In July of 2014, a Motorhead fan gave himself brain bleed, causing a concussion, from headbanging with such velocity during a live Motorhead performance. From the opening notes of most any Motorhead song – the thunderous and ballistic bass from Lemmy, the hotter-than-hell guitar riffs and licks from Phil Campbell, and the cannon-fire drums of Mickey Dee – the audience member or listener is placed at the center of a demolition derby where vehicles moving with the rapidity of a Harley, and the force of a semi-truck collide. It is a wonder that only one fan, as far as anyone knows, wound up concussed.

The Motorhead lineup changed several times since its 1975 inception. Campbell and Dee formed the power trio with Lemmy in its most recent incarnation, but the classic lineup of Motorhead that lasted until the early 1980s featured drummer Phil “The Philthy Animal” Taylor, who also recently died, and Fast Eddie Clarke on guitar. Lemmy Kilmister – bassist, chief songwriter, and Satanic scorcher of a singer, was the visionary and the constant.

He grew up in England and Wales, spent time as a roadie for Jimi Hendrix, and swore allegiance to the only authority in his life he would ever respect: rock ‘n’ roll. He played in several bands, including Hawkwind, before forming Motorhead, and finding a lifelong placement in the world of ribald, raucous, and raunchy rock. Despite having an immeasurable influence on Metallica, Anthrax, Slayer, Dave Grohl, Ice T, Henry Rollins, Megadeth, Slash, and a verifiable who’s who of hard and heavy music, Motorhead never made it into the Rock and Roll Hall of Fame.

Some critics, lost in a cloud of snobbery and nicety, foolishly dismiss Motorhead as simplistic or juvenile, but the legacy of Lemmy – and his band – is the building of bridges between seemingly disparate points of music: 1950s rock ‘n’ roll, punk, and metal.

Lemmy loved Little Richard, Elvis Presley, Jerry Lee Lewis and Chuck Berry, planted his feet firmly on their foundation, plugged in an amplifier, turned it way past ten, and played as fast and loud as he could. His singing style resembled a British born Howlin’ Wolf possessed by Satan. James Hetfield, lead singer of Metallica, put it best when he recalled hearing his first Motorhead record: “I just couldn’t believe a human being was singing like that.”

Motorhead’s music was the amplification of the middle finger, and the best of their songs – “The Chase is Better Than The Catch,” “Overkill,” “Damage Case,” “Ace of Spades,” among many, many others – elevate pleasure as sacrament, freedom as sacred, and hedonistic independence as lifestyle. Motorhead’s discography is essential for accessing the energy of Lemmy’s music, but the same spirit is audible in the songs he wrote for The Ramones and Ozzy Osbourne.

Lemmy never lost sight of how rock ‘n’ roll, whether his brand sounded like heavy metal, punk, or a Sun Studios Elvis cut after sniffing eight lines of cocaine, was always meant for fun and rebellion. His music never lost that edge. Bad Magic, Motorhead’s 2015 record, featured Lemmy in worn voice, but full power as a practitioner of lean and mean hard rock. “Thunder and Lightning” and “Shoot Out All of Your Lights” sound like contemporary classics, and of the doom inflicted cover of The Rolling Stones’ “Sympathy for the Devil,” Lemmy said, “I think we beat them.” He was right.

He also beat the Stones at the game of rock ‘n’ roll rebellion. While everyone rushed to romanticize Keith Richards, and he posed for Louis Vuitton ads and lounged around Disney film studios, Lemmy Kilmister was cutting records, living in a Los Angeles apartment, and spending his time off from the road slugging Jack Daniels and sucking down smokes at his favorite hangout, the Rainbow Bar and Grill.

Lemmy had his oddities and eccentricities. His massive collection of Nazi memorabilia was weird, to say the least, despite his credible insistence that he was not a racist and had only hate for Hitler’s ideology. He just liked World War II. Lemmy had no room for compromise or apology in his life. He never negotiated away the aggression of his music nor did he consider any amendments to his individualistic mentality.

The music of Motorhead expressed his hatred and rejection of what, Rudolph Rocker, an anarchist philosopher calls, “the political or ecclesiastical guardianship of society.”

“Just Cos You Got The Power” is a mind melting song full of fiery guitar work and growling vocals, taking aim at corporate influence over politics, control over culture, and exploitation of workers. A chief executive officer, according to Lemmy, is a “slimy lizard in an expensive suit.”

Lemmy borrowed the title of a Woody Allen movie – “Orgasmatron” – to indict the three manipulators of men – organized religion, corrupt politicians, and advocates of war – while “Deaf Forever” gives a chilling description – with the blunt force trauma of Motorhead’s musical weaponry – of the consequences of war. “Bad Religion” and “God Was Never On Your Side” are self-explanatory eviscerations of clerical bullies who seek to impose their dogmas on unsuspecting victims through fiat and faith enforced politics.

Lemmy was a champion of freedom, and an enemy of authority, but it would be an error to overly intellectualize Motorhead’s contribution to humanity.

The music of Motorhead communicated and captured the intensity of living that is available to anyone with the courage to take it, fight for it, and feel it. Songs of sexual pleasure like “Love Me Like a Reptile,” “Dirty Love,” and “Killed by Death,” songs of rock ‘n’ roll excess like “Rock ‘n’ Roll,” “Born To Raise Hell,” and “I’m So Bad (Baby I Don’t Care),” and superior cover versions of “Cat Scratch Fever” and “Louie Louie” demonstrate a devil may care attitude that made Lemmy a legend, gave him his life, and might have possibly cost him his life.

When I reached out to Kirk Hammett, lead guitarist for Metallica for comment, he did not hesitate to offer some words of tribute to his musical hero and friend:

“He really lived a life similar to the life we heard about through his music. But he wasn’t a grandstander. You wouldn’t think it, but he was never the center of attention. He was always polite, liked his nooks and corners, and was always minding his own business. Lemmy was the real deal, a fine human being, and he was fully committed. That's what made him so great in my book. He lived the way he wanted, and he did not want to live forever, like we heard him say so many times.”

Not long before his death, Lemmy said, “If I die tomorrow, I can’t complain. It’s been good.” Until the end, Lemmy was still dedicated to that muse most responsible for the goodness of his life. Motorhead still played gigs with regularity, and he recently announced that they were recording songs for a new album. “The only thing that will stop me from making records is death,” he said with characteristic defiance.

That sad day has arrived, but Lemmy lived 70 years. It seems one has to judge his years according to a different standard than what applies to the ordinary person. Seventy Lemmy years are easily worth a hundred human years.

Lemmy Kilmister achieved the maximization of life through sheer force of will and relentless commitment to nothing else. There is a lesson there for rock gods and mere mortals alike.