You can like "Star Wars" a lot, like I did, and still worry about what its success means for Hollywood and culture 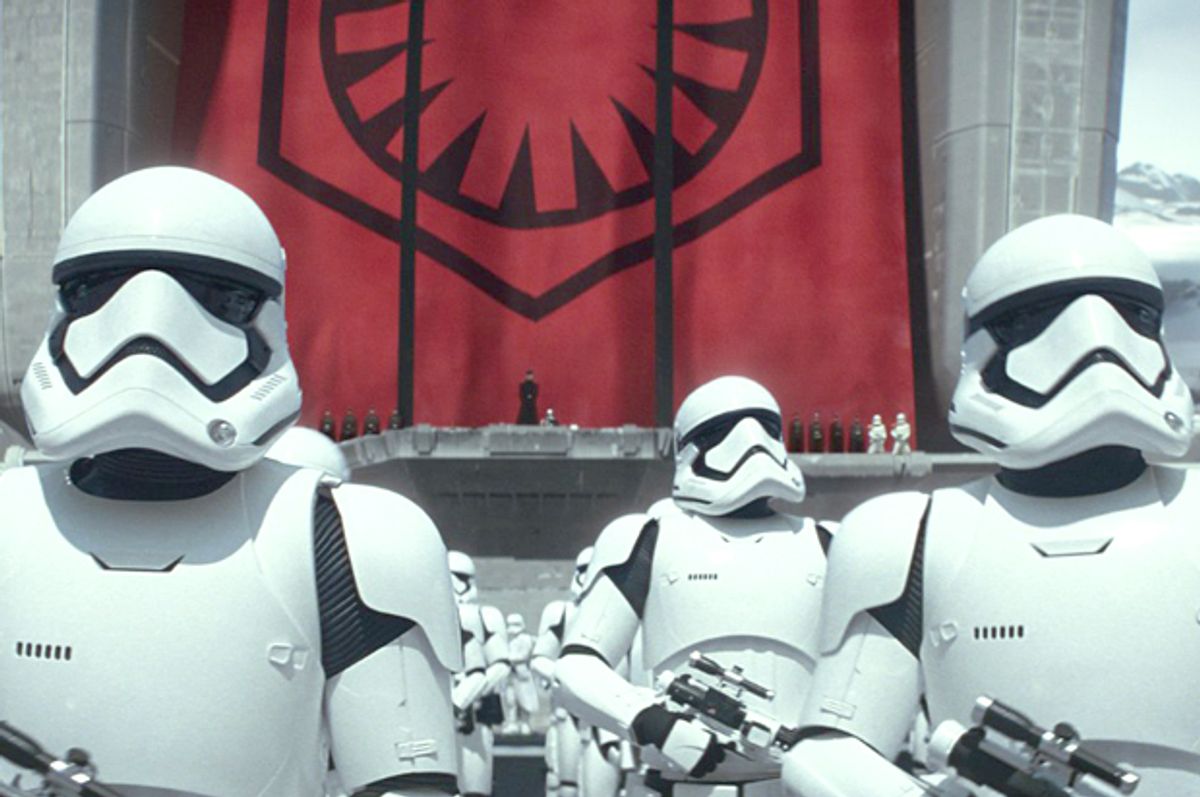 Between an opening weekend that took in more than half a billion dollars, reviews that were mostly glowing, and enormous amounts of coverage in print and online, “Star Wars: The Force Awakens” has come to seem less like the story of a small rebel band and more like a plan for interplanetary conquest that has crushed all opposition.

You can like the movie a lot, as I did, and still crave a dissenting view and sense of the impact of the film’s success. And that’s why a Los Angeles Times column by Michael Hiltzik is so valuable even if his take on the film itself is a touch sour: Hiltzik, who is an economics writer, not a film critic, describes the movie as “depressingly unimaginative and dull in long stretches,” and writes that it “reproduces George Lucas' original 1977 movie slavishly almost to the point of plagiarism.” Sure, there’s a bit too much referencing of the original – everything from the return of Han Solo to a new Darth Vader to a bar scene that’s a wink to the famous one in the first “Star Wars.” But many of the retro nods work pretty well.

Where the column is most valuable is where he talks about the way the new Star Wars movies will change Hollywood. Or, rather, how they will reinforce changes inaugurated by the original. It’s now become a commonplace to say that the original “Star Wars,” with an assist from “Jaws,” helped kill off the auteurist surge of ‘70s Hollywood that included “Chinatown,” “Taxi Driver,” and “The Godfather.” What followed was a demand for blockbusters, an obsession with merchandizing, endless sequels, and movies aimed at children and teenagers. Here’s Hiltzik:

Ever since then, blockbusters have dominated studio economics and big mainstream movies have gotten stupider. "Titanic," "Avatar," and "Prometheus" are professionally turned-out and entertaining enough for the two to three hours that one sits in the theater watching them and they mint money. But they don't have a coherent thought in their heads, despite the intellectual veneer decorating some of them… "The Force Awakens" will reinforce even more strongly a blockbuster, sequel-oriented style of moviemaking and marketing that has sapped Hollywood of its creative energies. Why be creative when that will merely interfere with merchandising, and when recycling is more dependably profitable?

There are still intelligent films aimed at grownup audiences, movies that emphasize acting over special effects, or characters over plans for action figures. The 1990s saw a healthy independent-film boom that was in some ways a nod to the ‘70s mavericks. But these days, except for the Oscar-qualifying season (which we’re in now), these sorts of films occur mostly around the margins. It’s not news that a lot of the most intelligent storytelling is on television these days.

Why should studios, which are now parts of large entertainment conglomerates, takes chances with a mid-sized movie about grownups when the big franchises – “Star Wars,” but also movies about superheroes and really fast cars – make most of the money and receive, in the new age of the blockbuster, so much media coverage that the other films are eclipsed?

The question did not begin with “The Force Awakens." When her book, “Sleepless in Hollywood,” came out in 2013, producer Lynda Obst told me that studios had become far more driven by their profit and loss statements than by individual human beings trying to make smart movies. “They can’t write, ‘I love this movie,’ on it,” she says. “That’s not the way it works. These days, when every call is a $250 million call, they don’t want to hear, ‘I believe in this movie.’ They want to hear, ‘This will work in the international market, because…’ ”

And the financial triumph of “Star Wars” is a sign that this go-big-or-go-home strategy has won. You can enjoy, as I do, the performance by Daisy Ridley, and admire the film’s use of a feminist protagonist. But when Rey, her character in “The Force Awakens,” produces eight action figures, all potential revenue generators, why should a studio finance any other kind of movie? When “The Force Awakens” earns more than a billion dollars in less than two weeks, why should Disney ever stop making “Star Wars” films, even if the studio runs out of decent ideas?

We’ll always have a mix of movies; no genre or style will die off completely. And boosters will denounce Hiltzik as a grouch or killjoy. But it’s possible to enjoy “The Force Awakens,” to find it at times thrilling and even poignant, and worry that it could also be a bad influence on a Hollywood that’s already given in to the dark side of the Force.