Welcome to the "1099 economy": The only things being shared are the scraps our corporations leave behind

Companies can hire and fire perma-lancers at will. Is it any wonder the middle class is vanishing before our eyes? 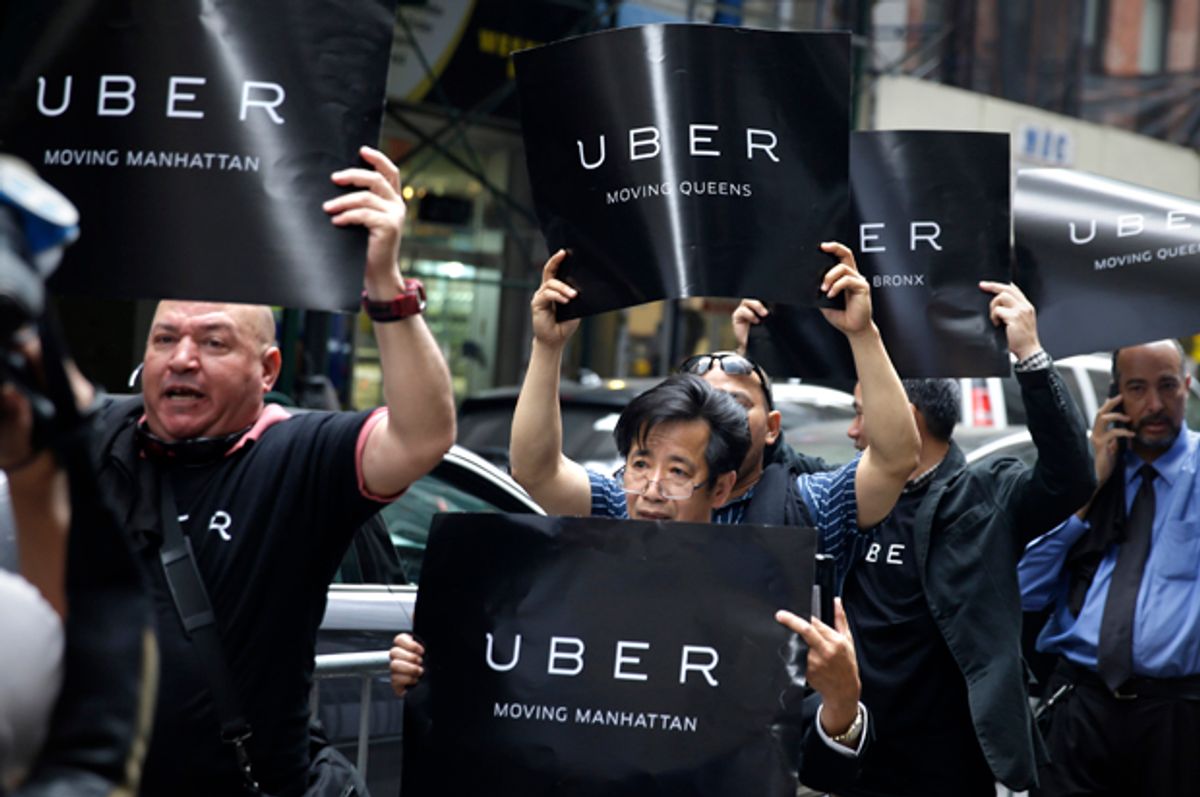 In the aftermath of the economic collapse in 2008, a significant factor in the decline of the quality of jobs in the United States, as well as in Europe has been employers’ increasing reliance on “non-regular” workers — a growing army of freelancers, temps, contractors, part-timers, day laborers, micro-entrepreneurs, gig-preneurs, solo-preneurs, contingent labor, perma-lancers and perma-temps. It’s practically a new taxonomy for a workforce that has become segmented into a dizzying assortment of labor categories. Even many full-time, professional jobs and occupations are experiencing this precarious shift.

This practice has given rise to the term “1099 economy,” since these employees don’t file W-2 income tax forms like any regular, permanent employee; instead, they receive the 1099-MISC form for an IRS classification known as “independent contractor.” The advantage for a business of using 1099 workers over W-2 wage-earners is obvious: an employer usually can lower its labor costs dramatically, often by 30 percent or more, since it is not responsible for a 1099 worker’s health benefits, retirement, unemployment or injured workers compensation, lunch breaks, overtime, disability, paid sick, holiday or vacation leave and more. In addition, contract workers are paid only for the specific number of hours they spend providing labor, or completing a specific job, which increasingly are being reduced to shorter and shorter “micro-gigs.”

But that’s not all. Suddenly not only was the pay per article or lecture not particularly lucrative, but I didn’t get paid for those many hours in which I had to query the editors for the next article or lecture, or conduct research and interviews. It was as if I had become an assembly line worker who was paid on a per-piece rate; the “extraneous” parts of my working day — rest and bathroom breaks, staff meetings or time with co-workers at the water cooler, usually paid time in a “good” job — had been stripped to the bone. Not to mention I no longer had paid vacations, sick days or holidays, nor could I benefit from unemployment or injured workers compensation. Instead of receiving a paycheck from a single employer, now I had to track my many and varied sources of income, making sure that unscrupulous editors didn’t stiff me.

In short, I had to juggle, juggle, juggle, while simultaneously running uphill — my life had been upended in ways I had never anticipated. And I began discovering that I was not alone. Many other friends and colleagues — including Pulitzer Prize-winning journalists, professionals and intellectuals, as well as many friends in pink-, white- and blue-collar jobs — also had become 1099 workers, tumbleweeds adrift in the labor market. They found themselves increasingly faced with similar challenges, each in his or her own profession, industry or trade. In short, we had entered the world of what is known as “precarious” work, most of us wholly unprepared.

Not to worry. The new economy visionaries — who like Dr. Pangloss in Voltaire’s Candide always see “the best of all possible worlds” — has a plan in place for us. A new mashup of Silicon Valley technology and Wall Street investment has thrust upon us the latest economic trend; the so-called "sharing economy," also known as the gig or on-demand economy. Companies like Uber, Airbnb, Instacart, Upwork and TaskRabbit allegedly are "liberating workers" to become "independent" and "the CEOs of their own businesses." These companies, the sharing economy gurus tells us, allow us to “monetize our assets” — rent out our house, our car, our labor, our driveway, our spare drill and other personal possessions — using any number of brokerage websites and mobile apps. This is the new “sharing” economy:  contracted, freelanced, “shared,” automated, Uber-ized, “1099-ed.”

Frederic Larson enjoyed a successful 30-year career as a staff photographer with the San Francisco Chronicle, during which time he won numerous awards, including being a Pulitzer Prize finalist. As Forbes reports, he was downsized during the recession, and needing income he “monetized his assets.” He turned his house into an Airbnb hotel and his spiffy Prius into a Lyft taxi. Now for 12 nights a month—40% of his life—he shutters himself in a rabbit hole inside his own home and showers at the local gym while complete strangers have the run of his place. This award-winning professional photographer has been turned into an innkeeper in his own home and a taxi driver in his own car.

In reality, these gig economy workers also are contractors, hiring themselves out for ever-smaller jobs (gigs) and wages, with no safety net, while the companies profit. Websites like Uber, Upwork, TaskRabbit, Airbnb and others have taken the Amazon/eBay model the next logical step. They benefit from an aura that seems to combine convenience with a patina of revolution; convenience as revolution. The idea of a “sharing” economy sounds so groovy — environmentally correct, politically neutral, anti-consumerist and all of it wrapped in the warm, fuzzy vocabulary of “sharing.” The vision has a utopian spin that is incredibly seductive in a world where both government and big business have let us down by leading us into the biggest economic crash since the Great Depression.

But the “sharing” economy’s app- and Web-based technologies have made it so incredibly easy to hire freelancers, temps, contractors and part-timers, why won’t every employer eventually lay off all its regular, W-2 employees and hire 1099 workers? Any business owner would be foolish not to, as he watches his competitors shave their labor costs by 30 percent (by escaping having to pay for an employee’s safety net and other benefits).

Sounds extreme? Merck, one of the world’s largest pharmaceutical companies, was a vanguard of this underhanded strategy. When it came under pressure to cut costs, it sold its Philadelphia factory to a company that fired all 400 employees—and then rehired them back as independent contractors. Merck then contracted with the company to carry on making antibiotics for them, using the exact same workers.

Examples abound of companies laying off all or most of their workers and then rehiring the same workers—as independent contractors, a clear abuse of this legal loophole. One new economy booster clarified employers’ audacious strategy: “Companies today want a workforce they can switch on and off as needed” — like one can turn off a faucet or a TV.

The apps and websites of the “share the crumbs” economy have made it easier than ever to do that. Companies can hire and fire 1099 workers at will. In essence, the purveyors of the new economy are forging an economic system in which those with money will be able to use faceless, anonymous interactions via brokerage websites and mobile apps to hire those without money by forcing an online bidding war to see who will charge the least for their labor, or to rent out their home, their car, or other personal property. These perverse incentives are threatening to destroy the U.S. labor force and turn tens of millions of workers into little more than day laborers. BuzzFeed’s Charlie Warzel has rightly observed that "any tech reporter who spends their time covering the sharing economy is now, essentially, a labor reporter.”

Outsourcing to these 1099 workers has become the preferred method for America’s business leaders to cut costs and maximize profits. This is only the beginning; we have yet to see how these trends will affect the labor force over the next decade or so. But already we can see that the so-called “new” economy looks an awful lot like the old, pre-New Deal economy. “Jobs” amount to a series of low-paid piece work – they’re called micro-gigs today—offering little empowerment for average workers, families or communities. We’re losing decades of progress, apparently for no other reason than because these on-demand companies conduct their business over the Internet and apps, somehow that makes them “special.” Technology has been granted a privileged and indulged place where the usual rules, laws and policies often are not applied.

If that practice becomes too widespread, you can say goodbye to the good jobs that have supported American families, goodbye to the middle class and goodbye to the way of life that made the United States the leading power of the world.