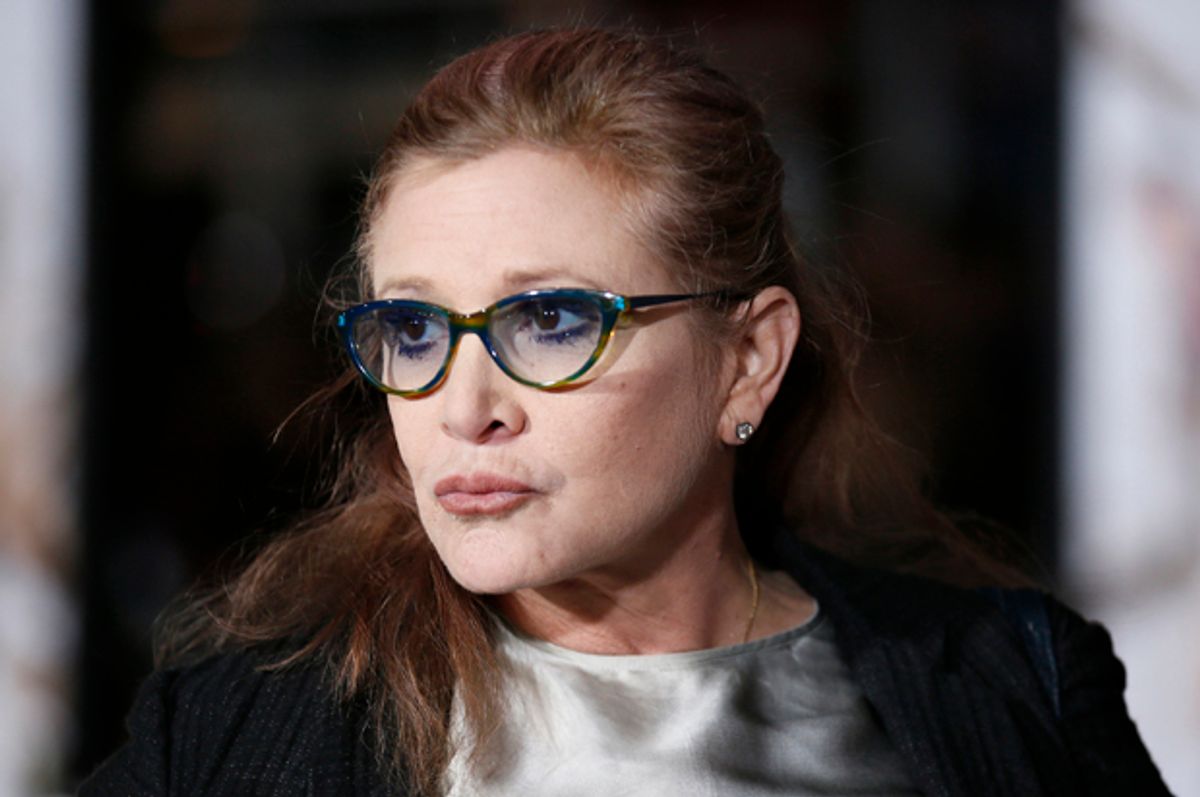 Oh, Carrie Fisher, we are not worthy of you. But you give and give anyway. So let's all be grateful to "The Force Awakens" for bestowing upon us this year's abundance of greatness from our beloved Leia, up to and including her on the money comments this week on how everybody can just shut up about her age.

While the entire Internet's been losing its damn mind lately over a decades image of shirtless Harrison Ford and Mindy Kaling has decreed the 73 year-old actor "still mega bangable on all planets," Carrie Fisher — who is 14 years Ford's junior — has in contrast had to address the apparently nonstop disappointment of those who wish she'd remained in a permanent gold bikini state. And she's done it with her trademark class and wit. Earlier this month, she replied to "Good Morning America's" Amy Robach's question of whether she needed to be persuaded to appear in the new "Star Wars" by drolly commenting, "They don’t have to ask you if you want to work at that age… you’ll see someday." Then on Tuesday, she rolled up her sleeves on Twitter and talked about it some more.

It was a hint of things to come when she retweeted a Tumblr post noting, "I get really protective over Carrie Fisher because nerds will go on and on about how cool and great Mark Hamill and Harrison Ford still are, but they’ll always be like 'Carrie Fisher sure didn’t age well huh' and it’s like you know what? f_ck you. she aged beautifully. she’s amazing. she’s gorgeous. just because you can’t fantasize about her returning to the gross metal slave bikini doesn’t mean she isn’t exactly as incredible as her old cast mates." She soon followed up with a more direct command, saying, "Please stop debating about whether OR not aged well. unfortunately it hurts all 3 of my feelings. My BODY hasn't aged as well as I have. Blow us." It's been favorited over 35 thousand times — and still going. She then retweeted a comment from a woman who observed, "Men don't age better than women, they're just allowed to age," and then for the kicker posted a photo of her dog Gary and the message, "My body is my brain bag, it hauls me around to those places & in front of faces where theres something to say or see…. Youth&BeautyR/NOT ACCOMPLISHMENTS, they're theTEMPORARY happy/BiProducts/of Time&/or DNA/Don't Hold yourBreath4either/ifUmust holdAir/takeGarys." And there are not enough HELL YEAHS in the world.

Fisher is a cool, smart, hilarious, and not that it should matter, but beautiful to boot 59 year-old woman. If you're ticked off that she's not the same beautiful woman she was nearly forty years ago — and as evidence that some people really are, she retweeted a "Star Wars" fan's comment that "YOU DIDNT AGE WELL AND U SUCKED IN STAR WARS. IT WAS A REST HOME FLICK. WANT MY MONEY BACK" — that's the fault of your own tiny and totally unrealistic expectations about what time does to humans. Maybe you'd be better off sticking with action figures?

Our culture allows gray hair and lines to be viewed as evidence of sexy maturity in men, but treats them as signs of diminished all around viability in women. And when a woman — especially one who makes her living in the public eye — pipes up and says, yeah, I'm not playing along with this, it's viewed as a shocking act, a downright betrayal of her fans. But Carrie Fisher, a woman who endured much in her life and has zero f_cks left to give, doesn't care. She understands that to grow older is a luxury that not everybody gets. Though she asks that we not debate whether she's aged well, the fact is, there's nothing to debate. And there is no better version of Carrie Fisher than the smart, outspoken lady of right now.