Hollywood likes putting black actresses on the red carpet but not on-screen: Lupita Nyong'o deserves better than a CGI role in "The Force Awakens"

For an actress like Jennifer Lawrence, an Academy Award signals a bright future. For black actresses, not so much 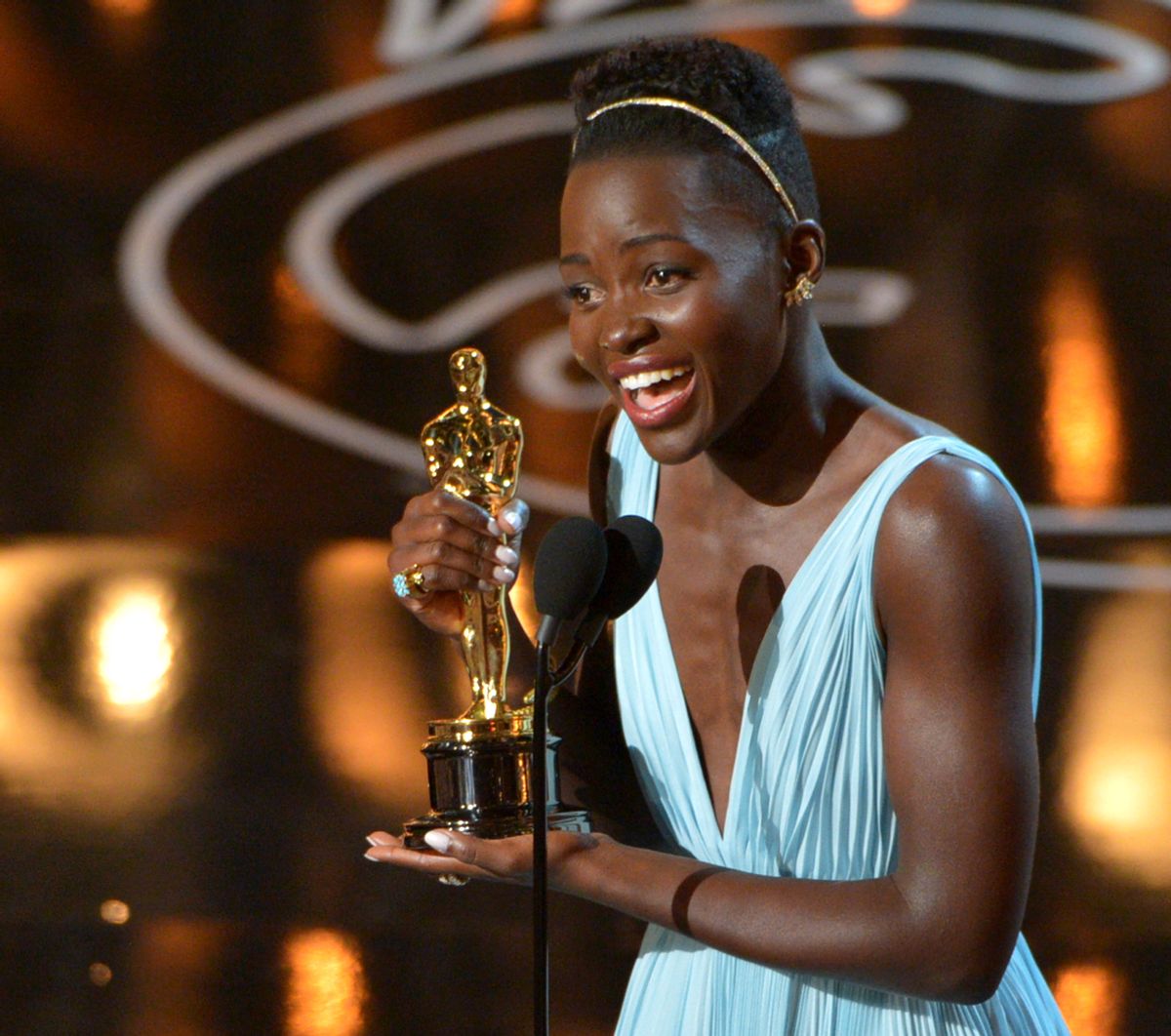 Since winning an Oscar for “12 Years a Slave” last year, actress Lupita Nyong'o’s face has been everywhere—from Paris fashion week to nearly every magazine in existence. N’yongo has been on the cover of Elle, Marie Claire, Vogue, W, Glamour, Dazed, Lucky and People, where she was the face of the mag’s Most Beautiful issue.

But one place you won’t see her is in the new “Star Wars” movie—at least on-screen. The actress plays Maz Kanata, a CGI space pirate who, once upon a time, served as the mentor to Han Solo. Depending on whom you ask, the character is either the new trilogy’s answer to Yoda or a narrative afterthought. They say there are no small parts, but it’s not just Kanata’s stature that’s diminutive: Maz Kanata gets (maybe) 15 minutes of screen time, among the least of any principal in “The Force Awakens.” I think Chewbacca and BB-8 got more lines.

Rumors suggest that’s not an accident: The Sun, a U.K. newspaper, reported that Lupita Nyong'o’s screen time was drastically reduced. “The CGI seemed to be what Lupita struggled with, perhaps because it meant she felt less of a connection to the character,” an anonymous source told the outlet. “There was a general sense that something wasn’t working so a lot of her scenes ended up being either re-worked or cut. Unfortunately she just didn’t end up delivering.” Director J.J. Abrams has slammed the reports as “ridiculous” and “preposterous.”

The Internet gossip mill hasn’t been kind to Lupita Nyong'o in the past few months. Another report from Britain’s Daily Mail suggested that she was difficult to work with behind the scenes of the Public Theater’s “Eclipsed,” the off-Broadway production about a group of women taken hostage in Liberia.

These so-called diva exposés are a dime a dozen, as likely bogus as the “Star Wars” rumor, but they’re particularly nefarious when it comes to a star whose career is as fragile as Nyong'o’s. While most Oscar winners can expect a bump after winning an award—like Christoph Waltz, who carried his trophy for “Inglourious Basterds” all the way to another win for “Django Unchained”—the Kenyan-Mexican actress hasn’t been seen on-screen since the 2014 Liam Neeson vehicle “Non-Stop.” Playing a flight attendant with a Grace Jones haircut, she gets about five words of dialogue the whole movie.

Her next role will be April’s “The Jungle Book,” yet another CGI performance, and she won’t actually get to star in a movie until Mira Nair’s “The Queen of Katwe,” which has yet to confirm a release date.

The speculation might suggest that the reason she can’t catch a break in an industry that appears to love her (remember when Jared Leto kept trying to get in her pants?) is that she’s hard to work with and not ready for prime time. After all, if she can’t even nail playing a space pirate, how can she possibly top-line a big-budget production? But the real problem is that Hollywood might love putting black women’s faces on the red carpet but it doesn’t love seeing them on-screen.

In a 2014 essay for the Hollywood Reporter, Chris Rock reminded us that black women continue to be all but invisible in the movies. “There are almost no black women in film,” he wrote. “You can go to whole movies and not see one black woman. They'll throw a black guy a bone. OK, here's a black guy. But is there a single black woman in ‘Interstellar’? Or ‘Gone Girl’? ‘Birdman’? ‘The Purge’? ‘Neighbors’?” Rock says that while HBO was casting the second season of “True Detective,” nearly every actress in the industry was considered for the part of Ani Bezzerides—which ended up going to Rachel McAdams—except for black actresses.

If Carrie Fisher argued that there are about 15 actresses over 40 who actually get cast in Hollywood films, the pool for black women is even smaller. It’s telling that both of the parts that Lupita Nyong'o turned down—co-starring with Renée Zellweger in “The Whole Truth” and Will Smith in “Concussion”—went to British actress Gugu Mbatha-Raw (“Belle,” “Beyond the Lights”). Those who don’t get those handful of parts have few other places to turn, at least if they actually want to appear in a movie.

Arguably, the most successful black actress in the past decade is Zoe Saldana—who is of Haitian and Dominican descent. A sci-fi movie staple, Saldana’s most successful roles have been in films like “Avatar” and “Guardians of the Galaxy,” which hide her mixed heritage behind CGI and makeup. It’s a lot easier to be a black woman in a big-budget Hollywood production when the character you are playing is green or blue.

Lupita Nyong'o has faced the same issue as Oscar winners like Jennifer Hudson and Halle Berry, who won Academy Awards while finding that the opportunities for them remain few and far between. In a 2014 essay, the Daily Dot’s Britt Julious argued: “As long as minority actors in general, and black actresses especially, are marginalized in their representation on film screens, an Academy Award win (and nomination) will remain as a marker of singularity rather than promise.” A win for actress Jennifer Lawrence might be the sign of a long and varied career, but for someone like Nyong'o, it’s too often the beginning of the end.

After Lupita’s Oscar win last year, the Hollywood Reporter argued that it would be a test for the industry. There had never been a black actress—particularly one with dark skin—who has boasted the success of Julia Roberts or Cate Blanchett, and THR’s Gregg Kilday predicted that it would either take a “forward-thinking director” or getting cast in a massive franchise to propel her to further success. Both of those things have happened: “The Force Awakens” is one of the most radically diverse films in Hollywood history, helmed by a director who is breaking incredible new ground when it comes to representation.

Nonetheless, Hollywood is continuing to fail that test. It might feel easy to blame Lupita Nyong'o with the same intensity that we used to praise her back when she was an awards season darling. She’s not gracious enough. She’s secretly a huge jerk. She’s not taking every single part thrown her way. She’s being too selective. She’s actually not even a very good actress. But if you need to ask why we won’t be seeing Lupita Nyong'o on-screen for a long time, it’s the same reason we rarely ever see other black actresses in a movie.