Nothing to be proud of: The real American exceptionalism is selling the most weapons in the world — by far

By selling weapons at alarming levels, the U.S. is further fueling the extremism it purports to be fighting 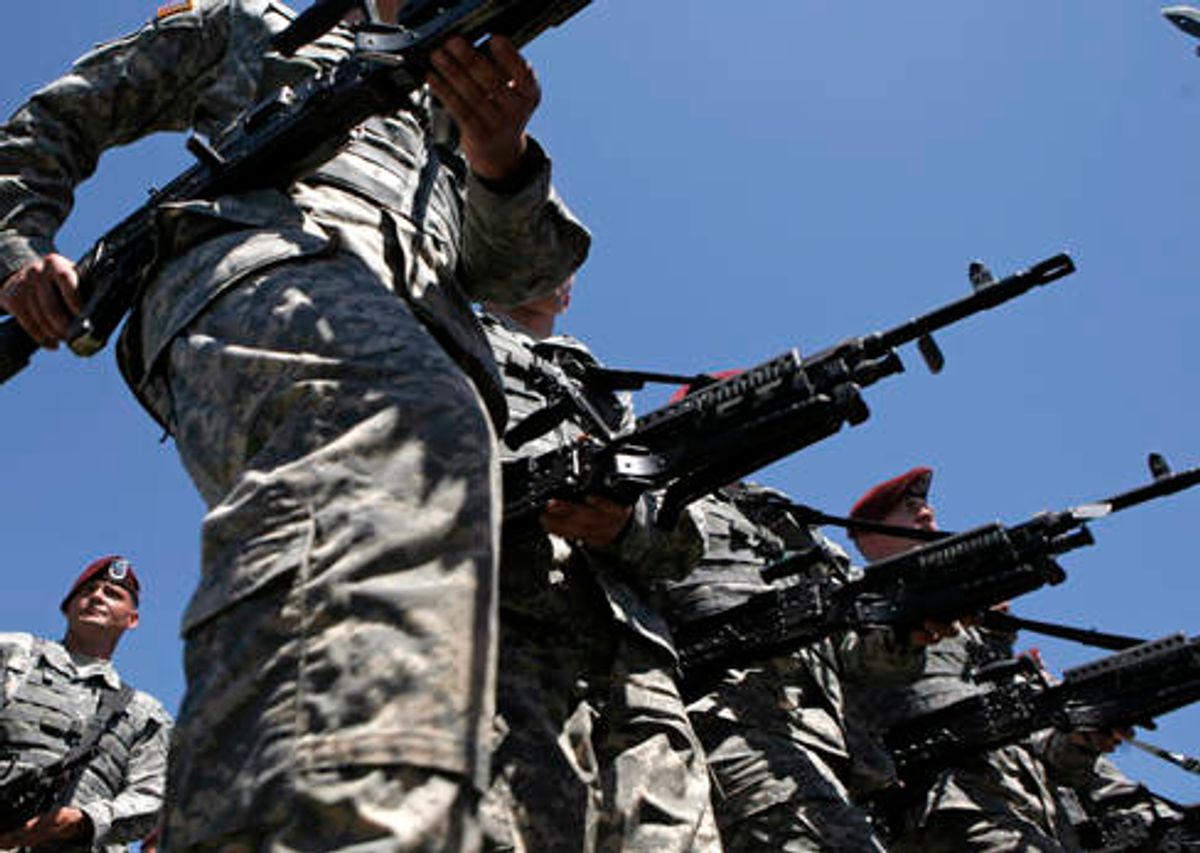 American exceptionalism — the notion that the U.S. is somehow an exceptional country, with no parallels in the world — is largely a myth. There is, however, one way in which it is absolutely true: The U.S. sells more weapons than any other country.

The U.S. has just 5 percent of the global population, but sells more than half of its weapons. And this number is increasing.

A new congressional study found that foreign arms sales by the U.S. increased by almost $10 billion in 2014 — up 35 percent.

No other countries even come close to the U.S. in weapons sales. As much as politicians and the media fear-monger about Russia, it sold just $10.2 billion in weapons in 2014 — a decrease from 2013. This pales in comparison to the $36.2 billion in arms sales the U.S. made in the same year.

That is to say, the U.S. sold over 3.5 times more weapons in 2014 than Russia, the world's second-largest arms dealer.

Sweden came in third, with a bit over half of Russia's arms sales. France and China followed with $4.4 billion and $2.2 billion, respectively.

Who is receiving the many billions of dollars of U.S. weapons? Primarily South Korea, Iraq, Saudi Arabia and Qatar.

South Korea bought $7.8 billion in weapons in 2014. According to the report, this is more than any other country — but this may be an underestimate, compared to U.S. deals with the Gulf monarchies. South Korea, a close Western ally, is building up its arsenal as tensions escalate between it and North Korea.

Iraq reportedly purchased the second-most, at $7.3 billion. This is unsurprising, considering the U.S. destroyed the Iraqi government after its 2003 invasion and subsequently built a new Iraqi government and military that is largely reliant upon it.

What is much less discussed, however, are the rapidly accelerating arms deals between the U.S. and Gulf monarchies. Saudi Arabia and Qatar, in particular, are buying more and more American weapons.

In the past five years, the Obama administration has done well over $100 billion in arms deals with the Saudi monarchy. From 2010 to 2014, the U.S. sold more than $90 billion in weapons to the Saudi regime. In October 2015, the Obama administration approved over $11 billion more. Less than three days after the November Paris attacks, the U.S. sold another $1.3 billion of bombs to Saudi Arabia.

The implications of this growing relationship have been largely glossed over in media reports.

Saudi Arabia is among the most reactionary, extremist and repressive countries on the planet. The theocratic regime, ruled by an extreme interpretation of Sharia (Islamic law), has been described as the "fountainhead" of militant Sunni Islamism and "an ISIS that has made it." Dissidents who challenge the Saudi regime are beheaded. The absolute monarchy beheads someone for drugs every four days, on average.

Former U.S. Sen. Bob Graham has identified Islamic extremist groups like ISIS and al-Qaida as "a product of Saudi ideals, Saudi money, and Saudi organizational support." U.S. government officials secretly admit among themselves that extremist groups like al-Qaida are supported by rich Saudis, but say little, because the Gulf monarchies have the world's largest oil reserves.

Qatar, another growing recipient of U.S. weapons, is not as extreme as Saudi Arabia, but it is part of a larger constellation of extremist, modern-day slave states in the Gulf. Like Saudi Arabia, it funds Salafi Islamist groups around the world. And, like Saudi Arabia, the U.S. recently sold it $11 billion in weapons.

Saudi Arabia and Qatar are using these new weapons primarily in two conflicts. They are brutally bombing Yemen -- the poorest country in the Middle East — in a nine-month-long war. Human rights organizations say the Saudi-led coalition is committing egregious war crimes; the U.N. says it is responsible for two-thirds of civilian casualties. The chaos the Saudi bombing and Qatari invasion have fomented is helping al-Qaida and ISIS expand into Yemen.

The Gulf monarchies are also funneling weapons to Islamist groups in the Syrian civil war — a catastrophic conflict in which more than 20 countries are embroiled. Saudi Arabia and Qatar, along with Western ally and NATO member Turkey, have been supporting Salafi groups like al-Nusra, al-Qaida's affiliate in Syria.

In effect, then, with its ever-accelerating arms trade — ostensibly to bolster allies in the so-called war on terror — the U.S. is in fact further fueling the extremism it purports to be fighting.

The military-industrial complex, about which President Dwight Eisenhower warned in his 1961 farewell address, is alive and well. And the more the U.S. exports weapons to these regimes, the more it will pour gasoline onto the flames of extremism.