Now they've even turned on Paul Ryan: Social conservatives unleashed, and furious, betrayed right-wingers are out for blood

Since the budget deal, the inboxes of conservatives have been filled with angry screeds denouncing Ryan's treachery 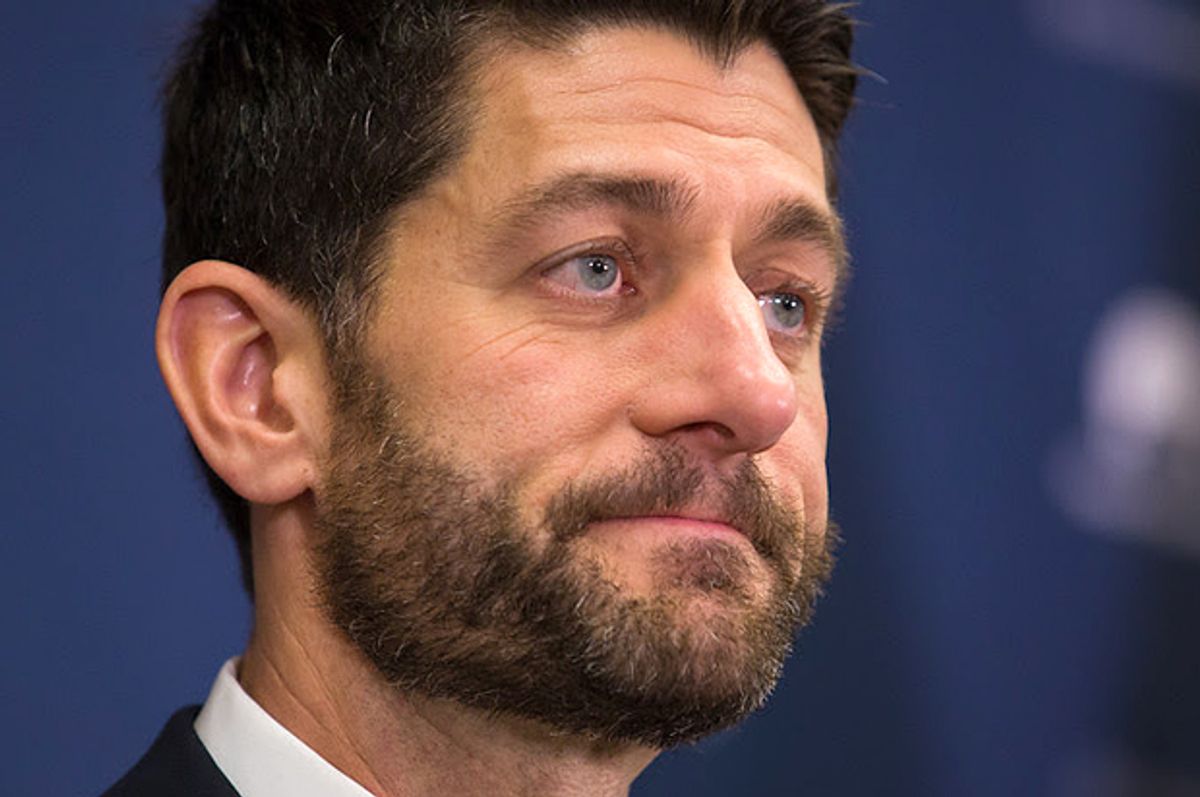 The social conservatives are very, very restless. Like everyone except lobbyists and billionaires, they feel betrayed and taken for granted by the GOP. These are valuable Republican foot soldiers and the establishment ignores their demands at their peril. It is the single biggest faction of the party. But giving in to them could mean a big loss at the ballot box in 2016.

That's not to say they are alone, however. It's likely that most people don't fully realize just how overwrought the entire Republican base is over this latest budget deal. Political observers knew that when Speaker John Boehner resigned the fix was in for a budget deal for this year. His swan song deal to set the top line numbers for two years paved the way for the new speaker to pass an agreement during his honeymoon. There was a little hiccup with the presumptive successor Kevin McCarthy turning out to be a dolt whose loose lips sank Trey Gowdy's ship on national TV, but eventually they brought in the BMOC Paul Ryan to get the job done.

Unfortunately, the rabid GOP base does not observe such antiquated concepts as political honeymoons and they refuse to admit that shutting down the government is not a useful tactic. They expect their representatives to hold the line, no matter what. And when they don't, there is hell to pay.

Every day since the budget deal was reached, the inboxes of conservatives have been filled with angry, vitriolic screeds denouncing Paul Ryan for his treachery and threatening members of the Freedom Caucus with primary challenges. (And since those Freedom Caucus members were elected by the Tea Party those threats have some serious bite.) Talk Radio is boiling over with angry denunciations of Washington. Rush Limbaugh's show last week illustrates their anger with a rant his website called "GOP Sells America Down the River":

[T]he Republicans have the largest number of seats in the House they've had in Congress since the Civil War. And it hasn't made any difference at all. It is as though Nancy Pelosi is still running the House and Harry Reid is still running the Senate. "Betrayed" is not even the word here. What has happened here is worse than betrayal. Betrayal is pretty bad, but it's worse than that. This was out-and-out, in-our-face lying, from the campaigns to individual statements made about the philosophical approach Republicans had to all this spending. There is no Republican Party! You know, we don't even need a Republican Party if they're gonna do this. You know, just elect Democrats, disband the Republican Party, and let the Democrats run it, because that's what's happening anyway...

He wasn't the only one. The entire activist base of the GOP is having an extended tantrum over this. They are now even comparing Paul Ryan to the hated Obama by calling him a Muslim — for growing a beard. The only reason it isn't a bigger story is that Congress isn't in session and the Trump Show is sucking all the energy out of everything else. (Rush actually begged Trump to add a criticism of this Omnibus "sell-out" to his repertoire of immigrant and Muslim hate-mongering.)

The "betrayal" in this case refers to the annual failure to end Obamacare and the continuance of the program for Syrian refugees.  But the one item that has them apoplectic is continued funding for Planned Parenthood. And there's good reason for the agitation: The social conservatives are in total revolt. And that is a big problem for the GOP, which depends upon the evangelical churches to get out the vote.

Antiabortion activists were given to understand by Republican leaders that the Planned Parenthood doctored videos had changed the game on abortion rights and they believed the party would succeed in ending all federal funding for the organization. They are livid that they were misled. As Sean Illing of Salon reported last week, Franklin Graham, the son of Billy Graham and highly respected leader of the Christian right, announced that he was leaving the Republican Party. In a fiery Facebook post he wrote:

After all of the appalling facts revealed this year about Planned Parenthood, our representatives in Washington had a chance to put a stop to this, but they didn’t. There’s no question—taxpayers should not be paying for abortions! Abortion is murder in God’s eyes. Seeing and hearing Planned Parenthood talk nonchalantly about selling baby parts from aborted fetuses with utter disregard for human life is reminiscent of Joseph Mengele and the Nazi concentration camps! That should’ve been all that was needed to turn off the faucet for their funding... This is an example of why I have resigned from the Republican Party and declared myself Independent.

Last summer when the videos first surfaced, with  ample input from conservative members of Congress, the congressional leadership knew they had a problem on their hands. They did not want to shut down the government again before the election. Despite the erroneous belief among the rank and file that government shutdowns automatically lead to victory, these seasoned polls understand that presidential elections are different than midterms and that they could be taking a huge chance in not only losing the White House again but also their congressional majority if they engage in another dangerous game of chicken. But they need social conservatives to stay engaged so they turned the rhetoric up to 11 and tried to appease them with promises of hearings and witch hunts. Former Speaker John Boehner even convened a Select Committee called “Select Investigative Panel on Infant Lives."

But he gave the game away when he said, “The goal here is not to shut down the government, the goal is to stop these horrific practices of organizations selling baby parts!” and it cost him his job. The antiabortion zealots thought they had won.

At the bottom of Graham's post resigning from the Republican Party, Graham posted a Huffington Post article by Robert Kuttner, which led off with this zinger:

Little noticed in the deal that Congress approved Friday is the fact that the anti-abortion lobby got wiped out.

After seeing that, no matter what the professionals tell them or what the polls say, the social conservatives are loaded for bear. Graham is embarking on a 50-state tour starting Jan. 5 in Iowa to spread the gospel and get the evangelicals to vote for people who share their values. And let's just say that any plans the Republicans may have had about calling a truce in the War on Women have pretty much been exploded.

Marjorie Dannenfelser, president of the antiabortion Susan B. Anthony List, ominously warned the Republicans, "Abortion will bubble over into the general election. If you don't know how to handle this issue, you will be eviscerated." And by "handling it" she means being even more doctrinaire and extreme on the issue than ever before. Today two of the more viable presidential candidates, Ted Cruz and Marco Rubio, now disapprove of abortion even in cases of rape and incest, a position that was until recently considered cruel and unreasonable even within the antiabortion movement.

And the presidential race will be unfolding as a number of other assaults on a woman's right to choose will be happening in other political realms. The AP reported this week that antiabortion forces are readying a multifront offensive:

The Supreme Court will be hearing arguments, probably in March, regarding a Texas law enacted in 2013 that would force numerous abortion clinics to close. One contested provision requires abortion facilities to be constructed like surgical centers; another says doctors performing abortions at clinics must have admitting privileges at a local hospital.

The Texas dispute will have echoes in other states as social conservatives lobby for more laws restricting abortion. Americans United for Life plans a multistate push for a package of bills called the Infants' Protection Project; one measure would ban abortions performed because of fetal abnormalities such as Down syndrome while another would ban abortions after five months of pregnancy.

Also unfolding during the campaign will be a new investigation launched by House Republicans to examine the practices of Planned Parenthood and other major abortion providers. The panel's chair, Rep. Marsha Blackburn of Tennessee, says its work will likely continue past Election Day.

New Hampshire, Nevada, Pennsylvania, Wisconsin and Ohio all have Senate races in which antiabortion candidates are having their feet held to the fire by the activist base.

Unfortunately for Republicans, this is unlikely to be a winning issue for them. The latest AP Poll released on Dec. 22 shows that the antiabortion base's extreme positions are out of step with a majority of Americans: 58 percent of U.S. adults say abortion should be legal in most or all cases while 39 percent say it should be illegal in most or all cases. And 54 percent believe Planned Parenthood should keep its federal funding.

This will not deter the social conservative base even a little bit. They are still steaming over the recognition of marriage equality and, like the rest of the right wing, they feel the Republicans have let them down so they are taking things into their own hands.

But despite the solid support for legal abortion and Planned Parenthood, it would be very unwise of the pro-choice community to be too sanguine that they have this one in the bag. Emphasizing the issue at the ballot box may not help the Republicans, but that doesn't mean they will not continue to make it more and more difficult for women to exercise their right to choose. For all their angry hand-wringing about being thwarted by the GOP, they know that on a state-by-state level they have been remarkably successful at restricting access to abortion. Indeed, if one didn't know better one might think that their conspicuous caterwauling over Planned Parenthood is just part of their larger strategy to keep their own supporters charged up and ready to fight in all 50 states.