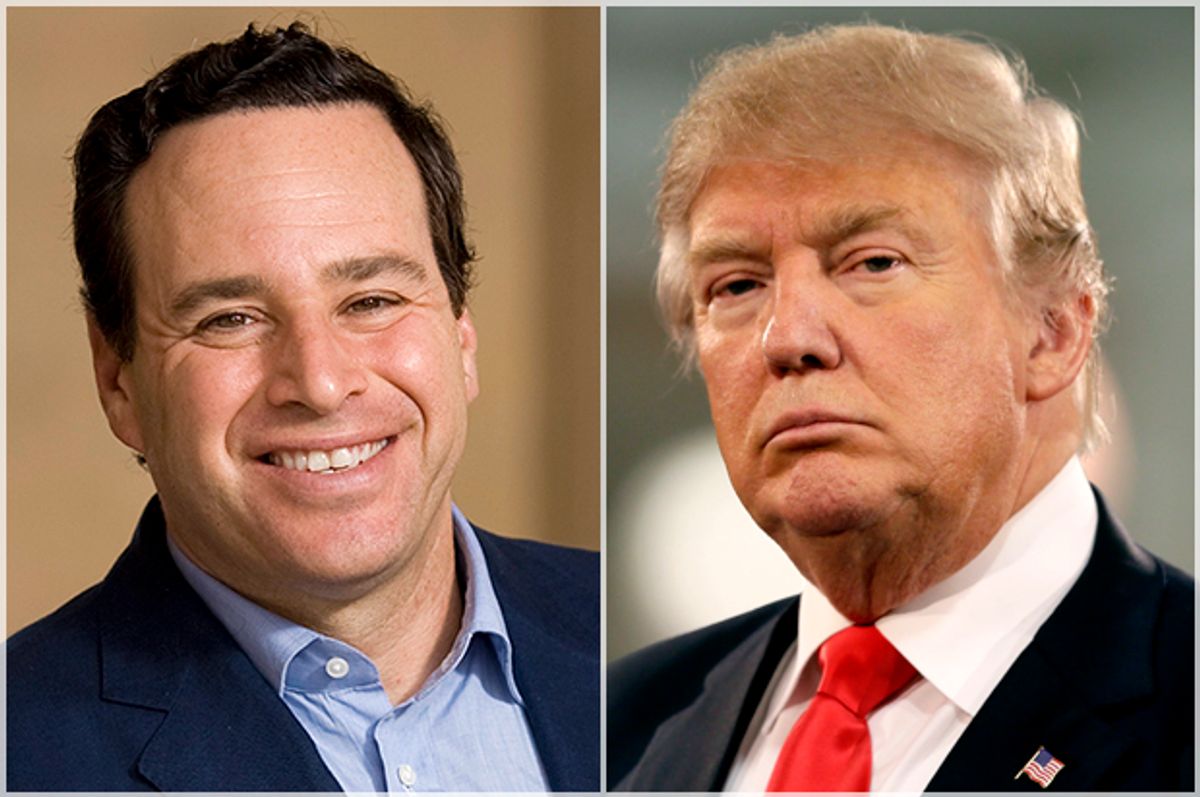 The latest issue of the Atlantic has a long essay by conservative pundit and former George W. Bush speechwriter David Frum analyzing the current squabble between the GOP’s elite donor class and its rank-and-file voters -- a fight that has resulted in Donald Trump dominating the presidential primary polls while easily swatting down every establishment challenger from Jeb Bush to Scott Walker. It’s a solid and clear-eyed piece from a writer who has, despite his conservative bona fides, occasionally committed apostasy in the last few years as his Republican Party has found itself in thrall to its angry, nativist base.

The piece falters, though, because Frum keeps ignoring one of the animating motivations of that same base. It’s not a case of ignoring the elephant in the room. This is more like ignoring the herd of elephants that just tore into his office and began stomping all the furniture, upending Frum so that he’s lying on the floor continuing to type into his laptop while his desk splinters and sharpened tusks obliterate the drywall.

I’m talking about racism, of course, and not just because I’ve read stories like this one examining how Trump’s candidacy has given white supremacists the biggest stiffies they have had since the Order blew away Alan Berg. Because we’re not talking about the type of racism that wears hoods and burns crosses on black families’ lawns. If anything, we’re talking about a racism more subtle and pernicious and backed into the structure of American society, a racism whose existence conservatives so often yadda yadda when the subject arises, a racism that we are forever exhausting ourselves just trying to prove to people like Frum that it exists.

Frum argues that the GOP base that is upsetting the party’s established order is simply “pissed off.” Which is true! But why is this mostly white cohort so angry?

The angriest and most pessimistic people in America are the people we used to call Middle Americans. Middle-class and middle-aged; not rich and not poor; people who are irked when asked to press 1 for English, and who wonder how white male became an accusation rather than a description.

As a white male, I feel comfortable saying that last part might have something to do with all the bad stuff white males have done for much of human history. Not that there hasn’t been good stuff. But when you have spent hundreds of years being the dominant force in nearly every facet of society, you have to expect a backlash as that society becomes more open and multicultural. You can take the accusation as a personal affront, or you can acknowledge that not every white man in history has been, to put it mildly, as awesome as you think you are. It’s a complicated history, but also it is really not.

Frum just admitted that the “white male” in America is upset about, among other things, having to tell an automated answering service that he prefers English over one of them weirdo non-English languages the people who take care of his lawn are always shouting at each other, and still he can’t make the leap to naming this kind of bias.

It was these pessimistic Republicans who powered the Tea Party movement of 2009 and 2010.

No, it was the same old conservative revanchists who seem to only grow vocal when a Democrat occupies the White House. In the '90s they spent years demanding their party chase Bill Clinton’s penis up one side of Pennsylvania Avenue and down the other. Clinton might not have been black, but it was the fear of his being a wild-eyed liberal right out of the 1960s with its attendant racial upheaval that gave force to much of the opposition to him. Clinton’s blatant attempts at defusing this opposition, such as attacking Sister Souljah and signing on to welfare reform, which disproportionately hurt people of color, did nothing to soothe this militancy.

In the Obama era, these same Republicans spent a couple of years being suddenly very, very, oh so very concerned with a national debt that had been mostly run up under a Republican president before making a fetish object of yanking affordable health insurance away from the undeserving. Who were the undeserving?

You didn’t have to look up the figures to have a sense that many of the uninsured were noncitizens (20 percent), or that even more were foreign-born (27 percent). In the Tea Party’s angry town-hall meetings, this issue resonated perhaps more loudly than any other—the ultimate example of redistribution from a deserving “us” to an undeserving “them.”

The closest study we have of the beliefs of Tea Party supporters, led by Theda Skocpol, a Harvard political scientist, found that “Tea Partiers judge entitlement programs not in terms of abstract free-market orthodoxy, but according to the perceived deservingness of recipients. The distinction between ‘workers’ and ‘people who don’t work’ is fundamental to Tea Party ideology.”

It is not so much a belief that GOP elites in the Obama era have “sold them out” as it is a fear that GOP elites have “sold them out in favor of immigrants/Muslims/black people/moochers/political correctness/campus leftists/what-have-you.” Do I once again have to link to the pictures from Tea Party anti-Obamacare rallies where old white people waved pictures of the president dressed as an African witch doctor, complete with a loincloth and bone through his nose like some image out of an Edgar Rice Burroughs novel? Because I’m not above doing that.

I keep hearing about this “reformocon” movement to which Frum has attached himself. The racism of today’s conservative movement is something that many of them continue denying. I don’t see how people like Frum and Ross Douthat can continue not reckoning with it if they want their party to pull out of its demographic death spiral. Or even just get through the 2016 election without Donald Trump as the nominee.