"Joy": Another Jennifer Lawrence-Bradley Cooper-David O. Russell holiday dramedy, and the sales pitch is getting creaky 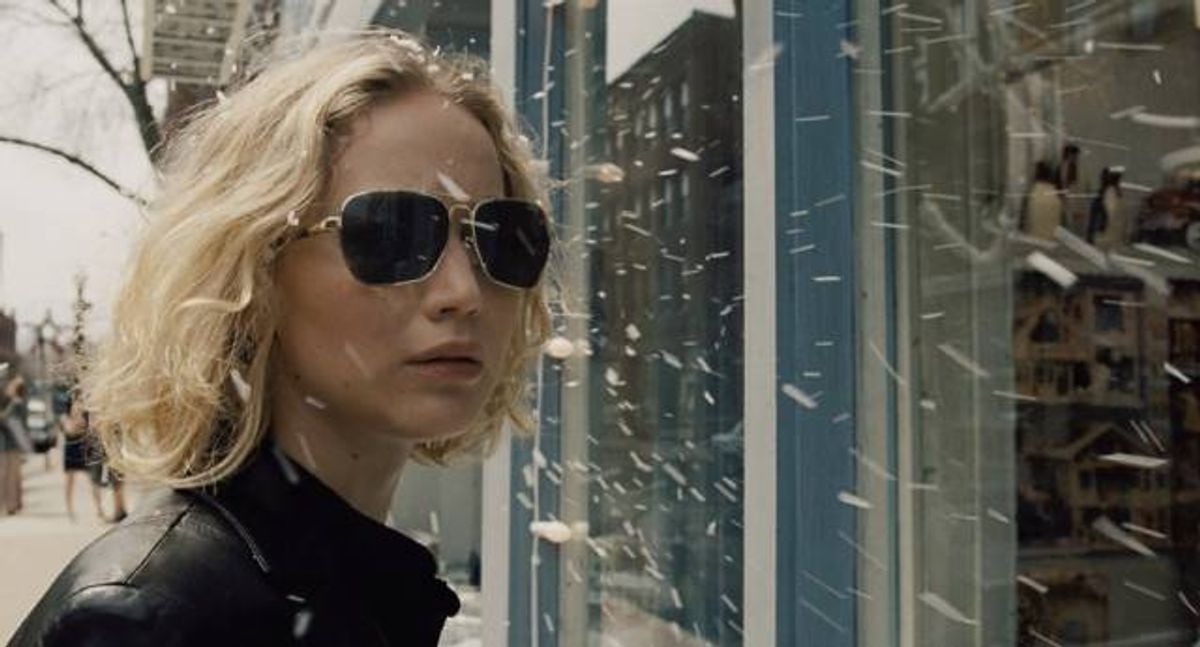 Here’s the problem with the whole David O. Russell-Jennifer Lawrence-Bradley Cooper entertainment package: There’s really no problem. I mean, there is and there isn’t. But even if you find their new movie “Joy” a major disappointment, as I do, and even if you think it exposes a hint of bogosity that has been there all along, you have to face the facts. Russell is an immensely gifted filmmaker who has resurrected his career in a highly unusual manner, reinventing himself as an A-list director of Oscar-bait prestige pictures after many years in the indie doghouse. He has developed a terrific rapport with two of the most charismatic movie stars of the moment, who are also fine actors and have great chemistry together. So what the hell problem could I be talking about?

Russell’s previous two films with Cooper and Lawrence, “American Hustle” and “Silver Linings Playbook,” were lovingly crafted hits loaded with charm and style. They featured memorable production design and cinematography, along with a colorful cast of characters pushed right to the edge of caricature but not over it. They were aimed at holiday-season adult and family audiences, they mixed comedy and drama and delivered happy endings without condescension, and they attracted scads of award nominations, including Lawrence’s best-actress Oscar (for “Silver Linings Playbook”) in 2013. Again, no visible problem. Or not really.

But here comes “Joy,” and I’m afraid the game is up. This is the third film in the Russell-Lawrence-Cooper cycle of whimsical American morality fables, and by far the least of the three. (You can’t quite count “The Fighter,” Russell’s 2010 comeback vehicle, because Cooper and Lawrence aren’t in it and it wasn’t a big hit. It’s more like the preface to the trilogy, and in retrospect it looks more and more like Russell’s best film.) “Joy” is certainly not a terrible movie by Hollywood standards, and lots of viewers will enjoy it just fine. It starts out with much the same zany, freewheeling energy found in “Silver Linings” and “American Hustle” — it’s almost like a mashup of those movies — before collapsing in the oven like a failed soufflé. While the classic three-act structure of mainstream film often produces the symptoms of Perfunctory Ending Disorder, or PED, in this case the effects are devastating and the patient does not survive.

It’s probably fair to say that Russell’s artistic self-reinvention has involved considerable strategy and calculation, and there’s no shame in that, for God’s sake. Beginning with “The Fighter” and even more so with “Silver Linings,” he has deliberately avoided pushing his stories beyond certain parameters, into ambitious or confrontational territory. You get the feeling he believes he has worked out the precise dimensions of the mainstream audience’s comfort zone. The problem — again, if there even is one — lies in the fact that the level of calculation in those movies was just slightly too close to the surface, and that each was an assemblage of super-fun ingredients that added up to somewhat less than the sum of their parts.

For fans of “American Hustle,” including a whole bunch of movie critics, it was pretty close to a contemporary classic, an old-time Hollywood caper film based on a real-life ’70s political scandal and delivered with the verve of mid-period Martin Scorsese. It’s always a mistake to give Oscar voters credit for artistic insight, but why did that film get 10 nominations from the Academy and win exactly nothing, which is a highly unusual outcome? To some extent, the answer lies in its pretty-close-ness, in the way it imitated a bunch of other things without synthesizing them, or the way it simulated a great movie without quite being one. I’m reaching for a quality here that may have a name in German but doesn’t in English — NotQuiteAsGoodAsItShouldBe-ness, or InfinitesimalTouchOfPhoniness — in order to throw subtle shade on a highly successful filmmaker and his unusual career narrative. Critics!

Anyway, “Joy.” This movie has different roots from the previous two entries, but recognizably takes place in the same universe. “Silver Linings Playbook” was adapted from a bestselling novel, and “American Hustle” was an original screenplay drawing on historical events. This one is the fictionalized story of Joy Mangano, a single mom from Long Island who invented a self-squeezing mop — a work of genius, quite honestly — and who rose from near-poverty to become a QVC superstar and the head of a marketing and merchandising empire. Russell wrote the screenplay, based on an original story co-written with Annie Mumolo. (He transplants the Mangano family from the Island to suburban Boston, a favored Russell locale.)

So here’s Jennifer Lawrence, as a scrappy working-class woman from a massively screwed-up family who reinvents herself and repeatedly risks disaster and won’t settle for less than total victory. And here’s Bradley Cooper, as a charming but slightly sleazy dude with bad hair and an ingenious plan. (One of the movie’s issues, inescapably, is that Cooper’s TV executive is essentially a minor supporting character, not a romantic lead.) Over here we have Robert De Niro, playing a feckless, failed father who possesses a deeply unwarranted self-confidence and is way too eager to offer his loudmouth delusional opinions. Stop me if any of this sounds familiar, will you? OK, you stopped me.

From a narrative and cinematic point of view, the problem with “Joy” is simple. Russell is almost totally uninterested in the story of how Joy Mangano explored a bizarre and unknown new business model and became its first self-made tycoon, and as a result we aren’t interested either. He wants to tell a David O. Russell story about how Joy’s deadbeat dad (De Niro) and her would-be lounge singer ex-husband (the terrific Édgar Ramírez) wound up as odd-couple roommates in her basement. And then about Dad’s romance with a rich Italian widow (Isabella Rossellini) and the vastly more improbable love affair that finally pulls Joy’s massively depressed and anxious mother (Virginia Madsen) out of her TV-watching, agoraphobic stupor.

All that stuff is terrific: hilarious and pathetic and keenly observed, but never flat-out cruel. Of course we’re delighted to watch Lawrence do her plucky-outsider bit as long as she wants to. Whatever you want to call her strange star quality, it’s irresistible. She stands there looking worried and launching wisecracks for, like, five seconds and we’re all in. Russell coasts on the coattails of Lawrence’s appeal here in a way he never has before, riding the crazy-family story as long as he can and then ditching it in a blurry, boring fast-forward toward a supposedly happy ending that feels more like an ellipsis. The problem with the Russell-Lawrence-Cooper entertainment package is that the packaging has become more important than the contents. And that, considering the talent level involved, the “entertainment” feels a little cheaply bought.