An Oscar nomination isn't everything, right? Three cheers for these stand-out actors who owned every scene in 2015 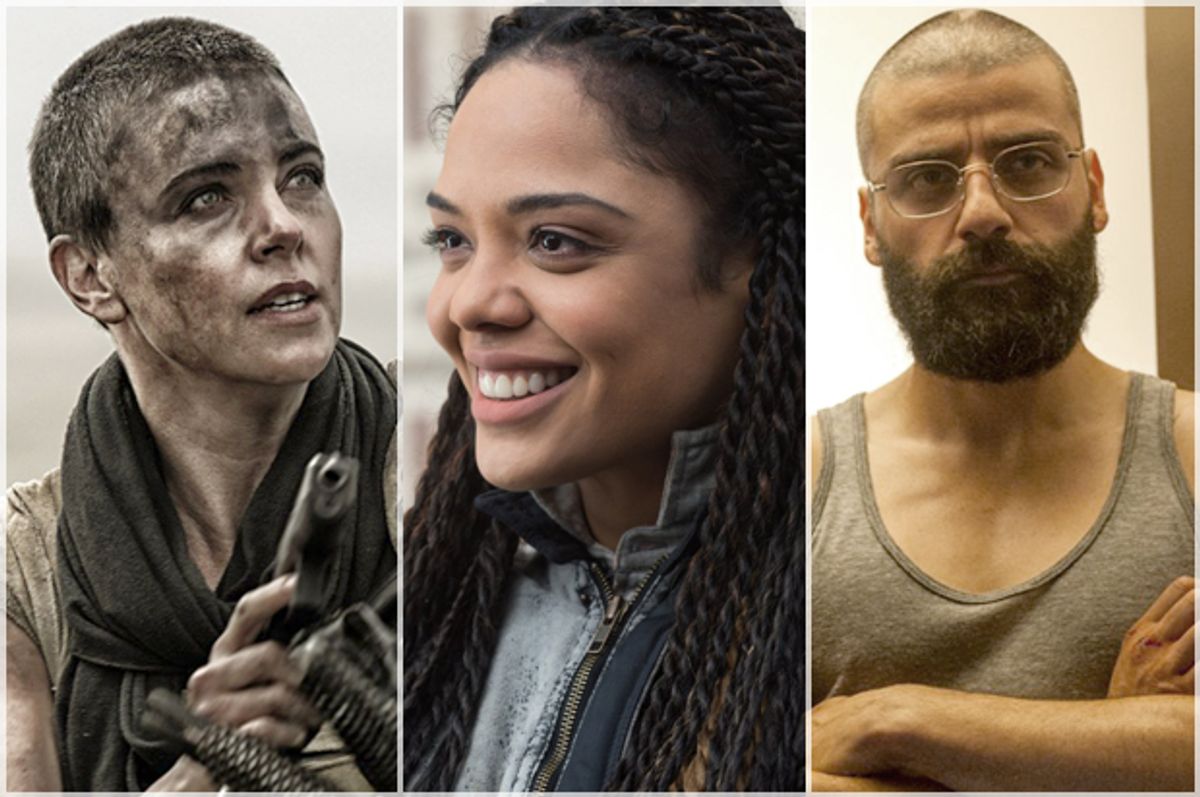 Every Oscar race features a number of sure things, safe bets and also-rans—the folks who might have gained traction in some of the awards guilds and smaller ceremonies but won’t hear their names read when the Academy Awards nominations are called out in January. This year, that’s likely to be folks like Kristen Stewart, who was recognized by the New York Film Critics Circle and France’s prestigious César Awards for her great work in “Clouds of Sils Maria,” or SAG nominee Michael Shannon (“99 Homes”)—still a long shot in this year’s race.

But what about the also-also-rans: the folks who have no realistic shot to get nominated for an Academy Award for their work—or even much else? They might not give Oscars for “best Bulgarian accent” or “best bearded sexy dance,” but that doesn’t mean these nine actors weren’t giving it their all in 2015.

For all the praise heaped on “Mad Max: Fury Road”—Rotten Tomatoes’ best reviewed film of the year—it’s a damn shame that Charlize Theron’s own superlative work isn’t likely to translate to much awards traction. In “Fury Road,” Theron proved not just that she’s one of the best actors of her generation but that she’s one of our great unsung action heroes. Theron’s one-armed Imperator Furiosa is as instantly iconic and unforgettable as the film she’s in, the 21st century’s answer to Ellen Ripley.

While Oscar Isaac’s co-star—the amazing Swedish actress Alicia Vikander—is stealing all the buzz for Alex Garland’s sci-fi thriller, Isaac’s work here shouldn’t be ignored. Isaac lends a simmering brute force to the film as an alcoholic, unpredictable tech CEO who invites an employee (Domhnall Gleeson) to partake in a controlled experiment at his private compound. “Ex Machina” proved Isaac a formidable leading man to watch, after stellar breakout turns in “Drive,” “Inside Llewyn Davis,” and “The Two Faces of January.” You can catch him right now in a little movie called “Star Wars: The Force Awakens.”

I love Melissa McCarthy. You love Melissa McCarthy. Everyone loves Melissa McCarthy. But I mean it as no impertinence when I say that her “Spy” co-star, Rose Byrne, made me laugh harder than anyone else this year. After “Bridesmaids” and “Neighbors,” Paul Feig’s Bond send-up further proved that Byrne has unbelievable comic timing, playing the opulently coarse daughter of a Bulgarian mobster. Rose Byrne is a mile-a-minute put-down machine in this movie, like Triumph the Insult Comic Dog in leopard-print spandex. I could watch Byrne and McCarthy trade barbs for the rest of my life.

Did you know that Cynthia Nixon is just a little gold man away from being an EGOT winner? The former “Sex and the City” actress has won awards for her work on that show, as well as her acclaimed role in “Rabbit Hole” on Broadway and the spoken-word companion album to the documentary “An Inconvenient Truth” (which is a thing, apparently). In “James White,” Nixon makes a strong case to be let into the club. In a scene that’s easily the most powerful and heartbreaking of the year, Nixon’s character, who is dying of cancer, listens as her troubled son (Christopher Abbott of “Girls”) envisions a happy ending for them in Paris. She moves for work, and he finds love. Life, however, isn’t always what we dream.

While Michael B. Jordan proves himself a bonafide star and Sylvester Stallone mounts his Oscar comeback, I’d like to see some of that love spread to their co-star, the terrific Tessa Thompson. You might recognize Thompson from “Veronica Mars”—where she played Veronica’s frenemy, Jackie—but 2014 was a breakthrough year for her, with roles in “Selma” and “Dear White People.” In “Creed,” Tessa Thompson plays Bianca, Adonis’ neighbor and later girlfriend, but she’s more than just boxing ring candy. She gives another soulful, layered performance as lived in as the movie’s Philadelphia setting, and playing an aspiring singer, she proves herself no slouch behind a mic.

6. Joel Edgerton in “The Gift”

Joel Edgerton gained traction early in this year’s Oscar race for his work in “Black Mass,” but his work in “The Gift” proved the true revelation. Edgerton pulls double duty, both directing and starring in this twisty thriller about a man (Jason Bateman), the kid he used to bully in school (Edgerton) and his concerned wife (Rebecca Hall)—who doesn’t know about his past. Instead of the conventional nice-people-stalked-by-deranged-lunatic narrative, this European-tinged nailbiter recalls the best work of Austria’s Michael Haneke. “The Gift” asks difficult questions about the comforts of suburban conformity and its costs, forcing us to ask who really is the bad guy here: the stalker or the man who has abused him for decades?

There’s a reason that Lionsgate is already discussing a spin-off film based around Benicio Del Toro. In Denis Villeneuve's acclaimed drug war thriller, “Sicario,” Del Toro reminds audiences why he remains one of cinema’s most venerable character actors. He’s a government operative working both sides of the border, whose behavior is perpetually confusing to his co-worker (Emily Blunt). Del Toro’s Alejandro is a cipher for the menace of the drug war itself, and his intense and stoic performance never gives too much away; he’s spellbinding to watch. Blunt is technically the lead, but given that the film’s title is “hitman” in Spanish, there’s never any question about whose movie this is.

The biggest issue with late-period Woody Allen movies—other than their writer/director’s problematic personal history—is that Allen thinks in themes, not characters. In “Irrational Man,” Joaquin Phoenix’s Abe feels less like a college professor than a soapbox for Woody Allen’s own conflicted philosophies. For all the Woodman’s contrivances, though, Parker Posey’s Rita feels like the closest he’s come to an actual person in years. Posey has a knack for playing characters with a hint of darkness (see: her recent stint on “Louie”), and her character—a married colleague who falls in love with Abe—is perpetually frazzled and conflicted but completely absorbing. When she’s onscreen, she brings out the best in Woody Allen, and if he’s at all smart, Allen’s next movie should be the Parker Posey vehicle we deserved ages ago.

John Crowley’s “Brooklyn” features an embarrassment of great, understated performances from its talented ensemble. Saoirse Ronan, who gives the performance of her young career as an Irish immigrant in 1950s New York, is my personal favorite in this year’s Best Actress Oscar race, but the film’s humane touch extends to nearly every character. The always great Julie Walters (“Billy Elliott,” “Mamma Mia”) particularly shines as Eilis’ (Ronan) boisterously spirited landlady. What makes “Brooklyn” one of the finest films of the year is that it feels so wonderfully alive and rich with experience, as if you could take up a room in Walters’ boarding house and live there. I would in a second.