Nixon's "environmental bandwagon": Richard Nixon signed the landmark Clean Air Act of 1970 -- but not because he had any great concern about the environment

Nixon was not one to be outdone by his political rival "Mr. Clean" Ed Muskie -- and so we have the Clean Air Act 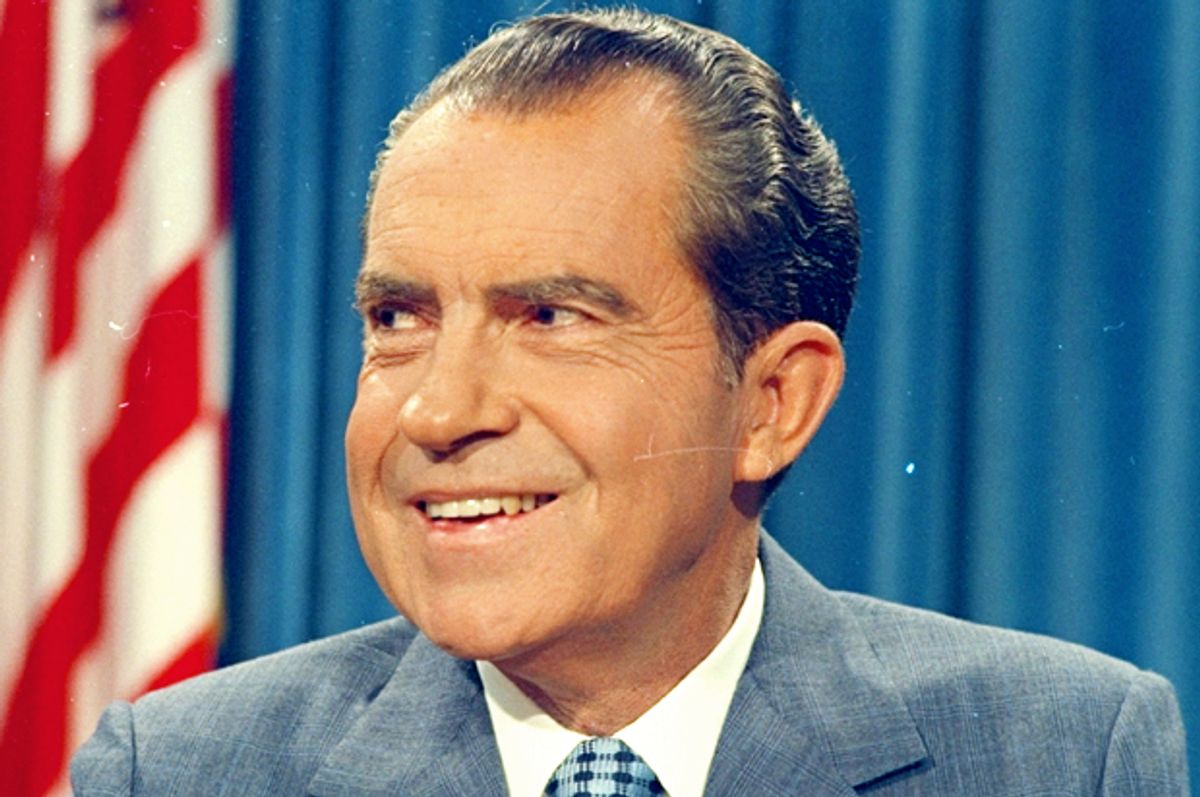 For polluters, America in 1970 was still something of a Wild West. A number of federal, state and municipal laws aimed at improving air quality were already on the books, but few were enforced, and pollution from the nation’s ever-growing stock of motor vehicles, power plants and factories remained uncontrolled in much of the country. A passage from the Ralph Nader Study Group’s "Vanishing Air," published in May 1970, vividly illustrates the extent to which dirty air was a fact of life for city dwellers of the period:

The New Yorker almost always senses a slight discomfort in breathing, especially in midtown; he knows that his cleaning bills are higher than they would be in the country; he periodically runs his handkerchief across his face and notes the fine black soot that has fallen on him; and he often feels the air pressing against him with almost as much weight as the bodies in the crowds he weaves through daily.

New York’s problems with air quality were hardly unique. In an October 1969 letter to the Senate Subcommittee on Air and Water Pollution, a resident of St. Louis expressed similar sentiments about the sheer pervasiveness of pollution in her community:

What really made me take the time to write this letter was the realization that I had begun to take the haze and various odors for granted. Close the doors and windows and they’ll be less noticeable[. I]t is very disturbing to think I’ve become used to the burning-rubber smell in the evening and the slightly sour smell in the morning. What does air smell like?

And air pollution’s costs went far beyond sour smells and dirty handkerchiefs, as a series of deadly “inversions” both here and abroad had made dramatically clear beginning in the late 1940s.

Typically, the air at higher altitudes is cooler than that below. This is because the surface of the earth absorbs sunlight and radiates heat, warming the air closest to the ground. That warm surface air then cools as it rises higher into the atmosphere. But in certain weather conditions, this temperature pattern can be flipped. When a warm front moves in above a cooler mass of air, it acts as a sort of lid, preventing the surface air (and any pollutants it contains) from rising into the atmosphere and dispersing. The longer an inversion lasts, the worse surface air quality gets, as more and more pollution becomes trapped beneath the lid.

In 1948, Donora, an industrial town in southwest Pennsylvania, made national news after suffering a five-day inversion that killed 20 people and sickened 6,000 others, more than 40 percent of the town’s residents. Four years later came London’s “Great Smog of 1952,” another lengthy inversion that was estimated to have caused the premature deaths of at least 4,000 Londoners. And in 1966, an inversion in New York City killed an estimated 168 people over the course of a week.

Furthermore, though acute incidents drew the biggest headlines, scientists of the time were also beginning to understand that even “normal” levels of pollution had serious, long-term health consequences. In December 1970, the acting Surgeon General, in testimony before the House of Representatives, cited “abundant scientific evidence that exposure to polluted air is associated with the occurrence and worsening of chronic respiratory diseases, such as emphysema, bronchitis, asthma, and even lung cancer.”

And yet, while 1970 was not an ideal time for the actual environment, it was something of a golden age for environmentalists. On Jan. 1, 1970, President Richard Nixon signed the National Environmental Policy Act into law. Six months later, he proposed the creation of the Environmental Protection Agency, which opened for business in early December. And on Dec. 31, he capped off the year by signing the Clean Air Act, which was then—and still is—our nation’s most important environmental law. At the signing ceremony, Nixon speculated—correctly—that 1970 would later “be known as the year of the beginning, in which we really began to move on the problems of clean air and clean water and open spaces for the future generations of America.”

Why did all of these green stars align in 1970? For one thing, public interest in environmental issues was growing rapidly. According to nationwide Opinion Research Corporation polls, only 28 percent of the U.S. population considered air pollution a somewhat or very serious problem in 1965; by 1970, that figure had risen to 69 percent.

J. Clarence Davies, a Princeton political scientist who would go on to serve as a senior staffer for the White House Council on Environmental Quality, speculated at the time that heightened concern about environmental degradation was an inevitable product of America’s post-World War II economic boom:

The massive growth in production and in the availability of resources which has characterized the U.S. economy in the past two decades affects the problem of pollution in several ways. The increase in production has contributed to an intensification of the degree of actual pollution; the increase in the standard of living has permitted people the comparative luxury of being able to be concerned about this; and the availability of ample public and private resources has given the society sufficient funds and skilled manpower to provide the potential for dealing with the problem.

In other words, getting rich had come at great cost to the nation’s air and waterways, but, as a result of the nation’s new affluence, Americans were both more inclined to care about improving the quality of their environment and better equipped to succeed in that effort.

The most memorable demonstration of environmental protection’s newfound political salience came in April 1970 when Sen. Gaylord Nelson, a Wisconsin Democrat, and Rep. Pete McCloskey, a California Republican, co-chaired the first Earth Day, a “national teach-in on the environment.” The event drew more than 20 million participants all over the country. The same month, "CBS Evening News" anchor Walter Cronkite, who would soon become known as the “most trusted man in America,” began to include an environment-focused story in each night’s broadcast under the provocative heading “Can the World Be Saved?”

But even with strong public support for legislative action, the Clean Air Act likely wouldn’t have passed when it did and in the form it did if not for the somewhat unexpected advocacy of President Nixon. According to William Ruckelshaus, whom Nixon appointed as the first EPA administrator, the president did not share the public’s concern for the environment. He thought the environmental movement, along with the antiwar activism of the period, “reflected weaknesses of the American character.” Nixon was, however, very concerned with staying president, and his expected opponent for the 1972 race was Sen. Edmund Muskie, a Maine Democrat whose chairmanship of the Senate Subcommittee on Air and Water Pollution had earned him the nickname “Mr. Clean.” Nixon had no interest in conceding the green mantle to Muskie, so he set out to look even more protective of the environment than his liberal rival. Or, as the Nader report more colorfully explained, “The environmental bandwagon is the cheapest ride in town. . . . President Nixon paid his fare and jumped aboard.”

In his State of the Union address that January, President Nixon vowed to present Congress with the “most comprehensive and costly program of pollution control in America’s history.” (Apparently, in 1970, the costliness of a regulatory program was considered a selling point.) The following month, Nixon made good on his pledge with a special address to Congress that outlined a “37-point program, embracing 23 major legislative proposals and 14 new measures being taken by administrative action or Executive Order” aimed at addressing a variety of environmental concerns, including water pollution, air pollution, solid waste management and parklands. Among those 23 legislative proposals was a set of amendments to the nation’s existing air pollution laws that would eventually become the Clean Air Act of 1970.

Nixon’s air pollution bill was unquestionably stronger than one that Muskie himself had put forward the previous December, which included only modest improvements to the largely ineffectual Air Quality Act of 1967. But rather than admit defeat, Muskie doubled down. During the summer of 1970, his Senate subcommittee developed a bill that followed the same general structure as the president’s proposal but was much more ambitious: The deadlines were tighter, and the standards were both more stringent and more enforceable.

Most controversially, the new bill included a requirement that auto manufacturers cut pollution from new motor vehicles by 90 percent in only six years. In September, the Senate passed Muskie’s bill, 73–0.

The House had already passed a bill the previous June that more closely tracked Nixon’s, so a conference committee was charged with reconciling the two versions of the new law. Despite heavy lobbying by the auto industry and pressure from the White House to take a less aggressive approach, particularly with regard to the auto standards, the committee hewed much closer to the Senate version, and the new Clean Air Act was passed by both chambers of Congress in a voice vote on Dec. 18, 1970. When President Nixon signed the bill into law on Dec. 31, he invited a number of the Act’s congressional architects to the signing ceremony. Sen. Muskie was not among them.

More than four decades after its passage, the Clean Air Act remains a reliable source of controversy.  Every major rulemaking under the Act has prompted intense lobbying and litigation, and the policies of the Obama administration have been no exception.  Most recently, 45 of the 50 states have taken sides in an ongoing lawsuit over the EPA’s Clean Power Plan, which, for the first time in the Clean Air Act’s history, requires older power plants to reduce their emissions of the greenhouse gas carbon dioxide.  Ultimately, the suit will determine whether the EPA can meaningfully address the greatest environmental threat of our time: global climate change.

But whatever the future may hold, on the occasion of the Act’s 45th birthday, it’s important to acknowledge how much good it has already managed to do, despite relentless attempts by recalcitrant polluters to undermine its implementation.  Between 1970 and 2013, total emissions of six of the most common air pollutants—including those that form soot and smog—fell 68 percent, even as GDP more than tripled, energy consumption rose by 44 percent, and the U.S. population grew by 54 percent.

These reductions have yielded enormous dividends for the American public. A 1990 EPA study estimated that the Clean Air Act prevented 205,000 premature deaths between 1970 and 1990. Significant amendments made to the Act in 1990—under another Republican president, George H.W. Bush—have generated even larger benefits. A 2011 EPA study concluded that the 1990 amendments had prevented 160,000 premature deaths in 2010 alone and estimated that the number of lives saved annually would climb to 230,000 by 2020.

Richard L. Revesz is the Lawrence King Professor of Law and Dean Emeritus at New York University School of Law, where Jack Lienke is a Senior Attorney at the Institute for Policy Integrity. They are the co-authors of "Struggling for Air: Power Plants and the 'War on Coal'” (Oxford University Press 2016), from which this excerpt is adapted.