Our policies and actions routinely go against our oft-stated ideals. Here's how to examine the lies and spin 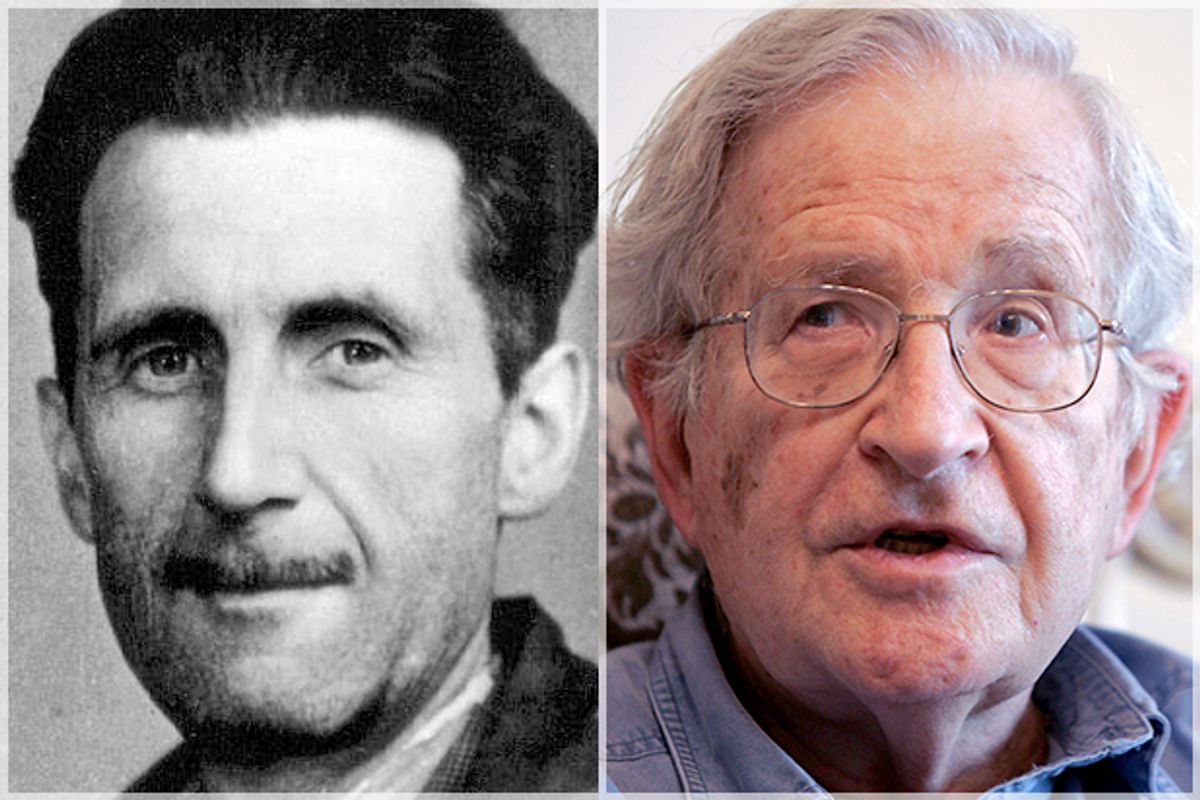 Despite what politicians say, understanding U.S. foreign policy is much more difficult than applying a black and white, good and evil, us versus them approach.  To begin to comprehend the maze of conflicting interests involved and how the U.S. acts against its oft-stated ideals, one needs to lean on George Orwell’s definition of "doublethink," or “the power of holding two contradictory beliefs in one’s mind simultaneously, and accepting both of them.”

The central means of population control in Orwell’s "1984," doublethink is also essential to the U.S. government and media’s ability to craft counterproductive foreign policies and narratives that go largely unquestioned by the mainstream media and American public.

Doublethink allows the U.S. government and media to apply its attention and ire selectively while maintaining that the U.S. supports democracy and opposes human rights abuses in the Middle East. It also facilitates the implementation of policies that blatantly contradict each other.

Glaring areas where doublethink has triumphed in U.S. foreign policy include American support for the draconian Saudi monarchy, the hardline Egyptian military dictatorship and the Iraqi regime allied closely with Iran. Doublethink is also conspicuously at play in U.S. condemnation of their enemies’ transgressions while ignoring its own as well as those of its allies. This is most clearly illustrated in U.S. support of Israel and condemnation of Russia.

Regarding Saudi Arabia, it is astounding that an America founded on the Enlightenment ideals of separation of church and state and individual liberty could blindly lend material and moral support to an Islamic monarchy noted for outdoing ISIS in beheadings. That the American media does not lambaste the U.S. government for honoring the princes of Saudi Arabia when they visit Washington speaks volumes about the influence that doublethink has on American society.  The U.S. proclaims to support freedom while facilitating the worst aspects of medieval Saudi tyranny.

In Egypt’s case it would be hard to argue that the Obama administration does not agree with Winston Churchill’s claim that, "The best argument against democracy is a five-minute conversation with the average voter." Although the U.S. government initially withheld aid in 2013 to the Egyptian military junta that overthrew the democratically elected Muslim Brotherhood, it is currently supplying the repressive Sisi regime with $1.3 billion in weapons precisely to stifle democratic dissent. Employing doublethink, the U.S. government preaches liberal democracy but keeps dictatorship afloat in Egypt by turning a blind eye to the thousands killed under General Sisi.

Another troubling application of doublethink is manifest in Iraq, where a Shia government is allied closely with Iran. Despite the fact the U.S. government and media persistently trumpet the evil existential threat that Iran poses, in the Iraqi case Iran’s evilness must be overlooked.  How else could the U.S. justify the billions of dollars and thousands of lives wasted in Iraq?

This takes on sharper resonance when one does the Middle Eastern math.  In Iraq, the U.S. created the Iranian allied government that is in a death struggle with the Islamic State, a Sunni terrorist group that arose out of the ashes of the 2003 U.S. “shock and awe” campaign to democratize the Middle East. The opposite is true in Syria where the U.S. indirectly supports ISIS in its attempts to overthrow Assad’s Iranian backed government. Famously, Orwell had the government manipulate Oceania’s citizens to believe that two plus two equals five.  In the Iraq and Syria cases the equivalent equation would be the belief that two plus two equals one million.  Clearly contradictory and counterproductive policies swallowed uncritically by the American masses.  Big Brother would be proud.

A more complicated and lesser focused on use of doublethink is the hypercritical U.S. stance on human rights embodied in the criticism of Russian bombing in Syria while remaining mum regarding heavy-handed Israeli tactics in Gaza in 2014 (with U.S. weapons).  To support Israel after the UN reported that its 2014 Operation Protective Edge killed 1,426 civilians, including 495 children, while condemning Russian efforts to defeat ISIS in Syria requires a callous level of doublethink.  Moreover, in light of the criticism of indiscriminate U.S. bombing in Afghanistan and Iraq any discussion of Russian civilian bombing in Syria requires faith in an Orwellian doublethink that is “conscious, or it would not be carried out with sufficient precision.” Orwell continues, “it also has to be unconscious, or it would bring with it a feeling of falsity and hence of guilt.” Thus, the U.S. can self-righteously criticize Russia for bombing civilians while denying America or Israel uses similar tactics.

It is quite clear that doublethink pervades U.S. government pronouncements, media reports and school textbooks. This use of doublethink relegates perspective and context to what Trotsky called the “ashbin of History.” In Orwell’s Oceania the government claimed that, “Who controls the past control the future; who controls the present controls the past.” Sadly, such manipulative control also exists in the U.S. and makes a mockery of historical memory while denying the slimmest notions of justice.