The high school musical that might have saved me: Watching a high school production of "A Chorus Line" in middle age showed me how much I missed

Being deemed a "theater fag" was the worst fate I could imagine. Now, decades later, I wonder what my fear cost me 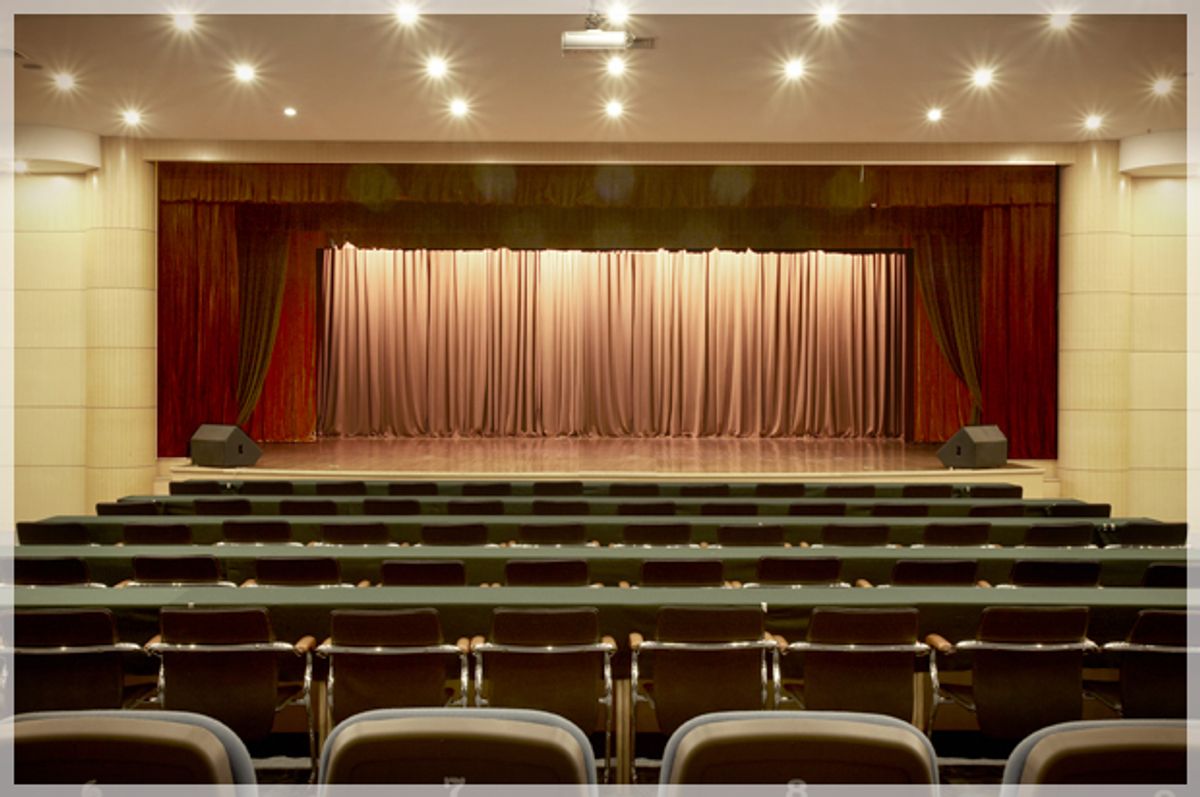 In 1975, the year Marvin Hamlisch and Edward Kleban's brilliant spectacle of dance and confession. first appeared on Broadway, I was 9 years old and just becoming aware that I was different from other boys. That year, after I’d expressed an interest in acting, my mother enrolled me in a drama school in Sacramento, incidentally the same school that a young Molly Ringwald attended. But after going to just one class, a well-meaning friend of mine who had heard of my interest from his mother but whose vocabulary was still developing asked me if I intended to become an actress. I quit that very day, instinctively frightened that I had already revealed too much about what I liked and who I was. Acting, I thought I had learned, was for girls and sissies, and I would no longer have anything to do with it.

In the years that followed, the social geography of my conservative, semi-rural California high school confirmed my suspicions. The theatre building was on the far north side of campus, perhaps purposefully isolated from the rest of the school. Every year, when hand-painted posters appeared advertising serious dramas or raucous musicals, a hum of activity surrounded the building. But I scrupulously kept my distance. To be found anywhere near it, I thought, was to be immediately and irredeemably implicated it all its queerness.

In between shows, however, as I went from one class to another, I occasionally observed thin boys with poofy hair and plump, colorfully dressed girls passing in and out of the building’s large metal doors, sometimes singing softly, more often all too wary of the ugly name-calling and contemptuous stares that were their daily crosses to bear. These especially unpopular people seemed to me neither heroic nor pathetic but simply stupid because they willingly, even willfully, brought such hateful attention upon themselves. At my school, they were either ridiculed as “drama fags” or, worse, ignored as irrelevant. The boys, especially, were subject to the loneliest kind of irrelevance. Except as the butt of a football player’s violent joke, it seemed to me, they didn’t exist. Thank God I wasn’t one of them, I told myself.

Things have changed a lot since the 1980s. America has grown more tolerant of gay people, high school musicals have become serious business, and after years of therapy and a lot of soul-searching, I’ve managed to become a reasonably happy adult who both loves the theatre and, miraculously, himself.

To be sure, my knowledge of Broadway is still woefully inadequate for a gay man, owing largely to my misspent youth; some things just can’t be repaired. A decade ago, however, I wrote a play that was produced at the New York Fringe Festival, and a few years ago I even acted in a community theater production of The Tempest, playing an especially effeminate and cowardly Trinculo to rave reviews. On both glorious occasions, a long-dead ember within me flamed anew.

So when a good friend and his partner, both musicians, invited my partner and me to a high school production of "A Chorus Line," I jumped at the chance. As we crowded into the enormous, expensively appointed theater, I felt a little self-conscious that the four of us – middle-aged men without wives or children – didn’t belong. But as we jostled past proud and eager parents and nearly tripped over their rambunctious younger children, some of whom were clearly aspiring performers themselves, I was also aware that I had, 30 years later, entered the high school theater building—and survived.

When the lights went up, and the dancers began dancing, I found myself utterly astonished by what I saw and heard. These teenagers were not only supremely talented performers but also confident, unembarrassed ones. They perfectly inhabited the gifted, devoted, anxious dancers they were portraying, not merely because they were these things themselves, but because they were that good.

Who were these extraordinary kids? And how did they get this way? Before the show, I’d been told by the conductor that many of them have had years of training and serious professional ambitions; but their self-assurance was something that could only be taught by supportive families, teachers and friends, by a world that welcomed and cherished them. I gazed admiringly into their eyes to discover what they might be feeling as they kicked and turned across the stage. Not all of them were physically beautiful. Some of the boys were short or skinny and some of the girls were chunky or a little plain. But they danced and sang like they were the most attractive and popular kids in school. And the roar of the audience made it clear that they were.

The racy lyrics of "A Chorus Line" never would have passed muster with the teachers and parents at my high school. Bullying, bigotry and callous disregard for the suffering of misfits were widely tolerated, but smoking, foul language, and overt sexuality were not. Indeed, the musical’s mature themes and frank talk of “tits and ass” even made me wonder for a moment just how age-appropriate it was, if these students really understood what they were saying. But the way they said it—with their voices and their bodies—told me that they did understand, that they knew not only what the adult material meant but also what it meant to them.

When the character of Cassie admits that her failed solo career has brought her back to the Broadway chorus line; when Greg sadly recalls the day he realized he was gay; when Val exults in her surgically enhanced breasts; when Sheila reflects on dancing as an escape from a broken family—as I listened to each of these very grown-up revelations delivered with such emotional clarity, I felt certain that, at least on some level, these kids already knew what it had taken me over four decades to learn: that life and love are treacherous and splendid things at the same time.

This was made tearfully, joyously clear to me when the character of Paul, alone onstage, confesses to the director, Zach, the story of his growing up gay in New York City, becoming a drag performer, and one day being discovered by his incredulous Puerto Rican parents. It was one thing to play gay in high school—one very heroic thing to do—but quite another to perform such fragile vulnerability and painfully honest strength, and to do it so flawlessly.

The young man playing Paul may or may not have been gay himself, but he looked every bit like one of the boys I knew in high school who lingered around the theater building, preferred the company of girls, and withstood endless abuse from his peers. I remembered with shame and regret the day I watched from a distance as a tough, swaggering jock put him in a chokehold and dragged him effortlessly across the quad to the delight of the lunch crowd. Onstage, Paul had a similarly soft, round, good-looking, melancholy face, and a husky physique. But his dancing was light and strong, his voice was clear and bright, and his demeanor credibly revealed a history of struggle.

As he told his story, the audience was silent, and the four of us wept quietly. I don’t know exactly why my partner and two friends wept, though I can imagine the reasons. I wept for Paul because his story was sad, because the actor was brave, and because this high school was—incredibly!—celebrating his bravery. I never thought I’d see this in a million years.

But I also wept because what the actor playing Paul brought to life onstage was something I had missed at his age, something I’d been unable or afraid to claim for myself— something that had not been possible, or at least, had not seemed possible at the time, which amounts to the same. What if I’d gone to such a school and had such support when I was a boy? Or what if I’d had the courage to go into the theater building, to withstand the abuse, to get up onstage and risk being called an actress or a sissy or a drama fag? Or what if I’d been wrong about my high school, wrong about the building into which I never dared enter, or wrong about the people who did? What had I missed? What had I forgone?

Sitting in the audience that night, full of awe, humility, and not a little envy, I understood that my life as I’d lived it wasn’t at all inevitable, though it often seemed so, that the man I’d become was never preordained but rather the aggregated result of particular circumstances and choices. Seeing so palpably that things might have been otherwise—other paths I might have taken, other identities I might have assumed—filled me with both profound regret and unmistakable satisfaction. Since that evening, I have frequently mourned the bold performer and unflinching devourer of experience I never became; but I’ve also come to believe that of all the possible lives I might have lived, this one was pretty damn good and, if I’m lucky and perhaps a little daring, might get even better.

One of my favorite songs in "A Chorus Line," now that I have seen it, occurs just after Paul injures himself and is carried off stage. As the other dancers consider how precarious their careers are—and how under-paid and under-appreciated—they finally declare that the risks have been worth it. I’d vaguely heard of “What I Did for Love” but always assumed it was about some sacrifice made in the name of romance, about the “sweetness and the sorrow” involved in devoting oneself to another person. But as I listened to these wonderful kids sing, it suddenly occurred to me that it was about the love of performance, the love of art:

“The gift was ours to borrow

It's as if we always knew

And I won't forget what I did for love

What I did for love.”

And as I wiped away another current of tears, I realized that the love of which they sung was also the love they had for themselves, which may just be courage by another name.

Edward Cahill teaches English literature at Fordham University. He is the author of Liberty of the Imagination: Aesthetic Theory, Literary Form, and Politics in the Early United States.