Religious delusions are destroying us: "Nothing more than man-made contrivances of domination and submission"

We managed a year of Charlie Hebdo, Franklin Graham, Ted Cruz, Josh Duggar and more creationism. To sanity in 2016 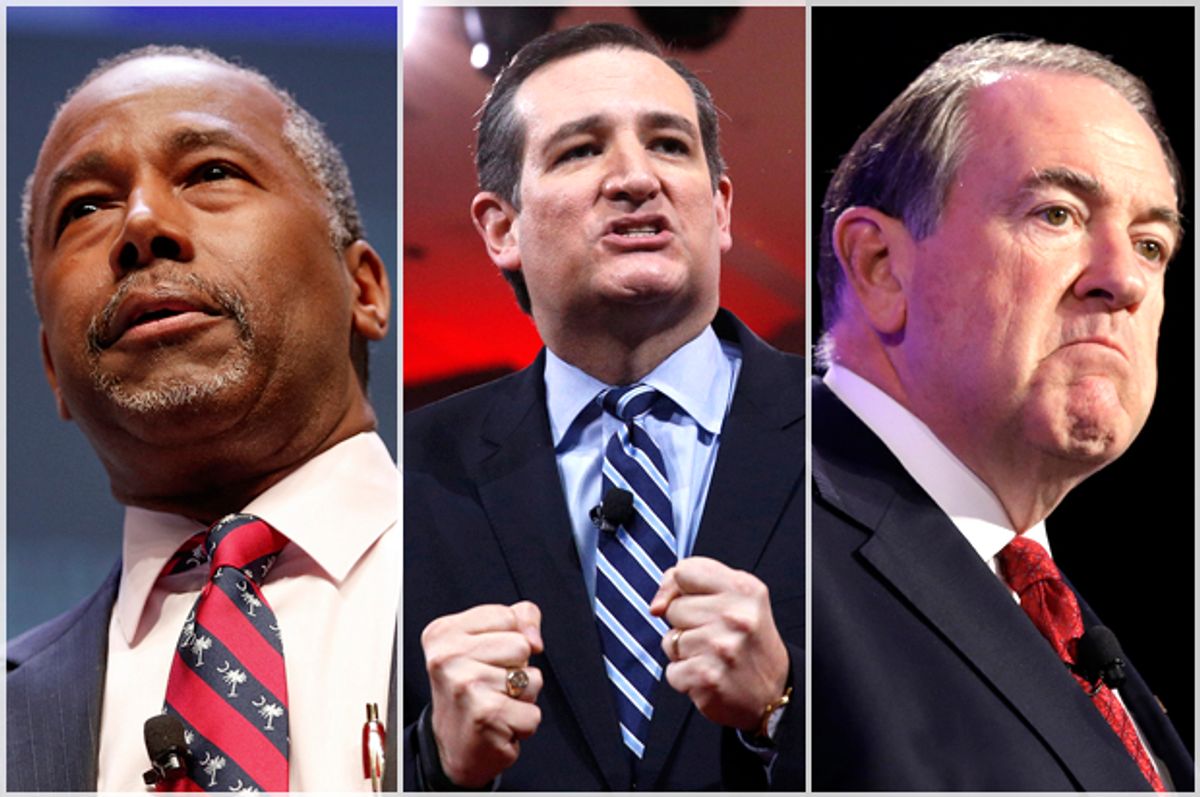 The year just past was, for rationalists, an unremitting annus horribilis. It leaves us with little reason to think 2016 will be much better.

But first, a digression.

If a close friend of yours told you he was feeling out of sorts and planning to go have a hole bored through his skull – an ancient procedure known as trepanation, once regarded as therapeutic for a number of ills – what would you do? You would explain to him that no evidence exists to recommend this, that medical science long ago discredited the gory practice. So no drilling through the cranium for him.

If, however, he were to accept your argument and desist from trepanation, yet instead choose to visit the local lobotomist for relief, you would have to urge him to refrain once again, as no evidence justifies lobotomies, once thought curative for various mental disorders, either. So no ice-pick up the eye socket for him.

In both cases, you would have saved your friend from unnecessary brain damage and pointless emotional duress, and would deserve his gratitude. Switching from bale to bane would have done him no good.

Yet attempt to disabuse aficionados of the brain-warping faiths in the name of which so much blood has been and is being spilled, and so much unnecessary anguish forced on so many innocents, and they will quite likely shower you with abuse, calling you an agent of Satan, morally deficient, intolerant, or just plain disrespectful. Worse, If Islam is the faith in question, a contingent of witless liberals (themselves not believers) would join in, crowing about “Islamophobia” and racism, though Islam is not a race, but a hallowed ideology with universal pretensions and followers of every skin color. The result: Religion – which is to say, a construct of comprehensive, evidence-free propositions about our universe and mankind, entertained with often fanatical certitude – enjoys, even in 2016, undeserved respect, tax exemptions costing government coffers $71 billion annually, and even a place of honor on our currency. In the world’s first secular republic, this is an outrage.

All religions are nothing more than man-made contrivances of domination and submission, exploited by humans for mundane ends, and accoutered with sundry superstitious rituals meant to ensure tribal loyalty and generate animosity toward outsiders. Long before we in the West knew of faith-sanctioned female genital mutilation or the hurling of gays from rooftops, Shakespeare declared, “What damned error but some sober brow/will bless it and approve it with a text/hiding the grossness with fair ornament.” And remember: the “damned errors” and “grossness” are all for naught. Religion is a lie, and those who profess it, dupes of the lie.

The baseline for progressives should be, however, the truth. If a proposition, however unpleasant, can be supported by objective evidence, we need to recognize it as true, at least until new evidence arises that disproves it. If we’re interested in the wellbeing of our fellows, and we see them behaving in accordance with disproven propositions, we should tell them so and help them see the light. We should, thus, importune our faith-addled friend on the way to the church, mosque, or synagogue, and patiently explain to him the errors of his ways. He needs religion, in short, like a hole in the head or an icepick up the eye socket, and we should tell him so.

Back to the bygone year. 2015 provided us with a bumper crop of examples of just how tragic religious delusions can be. And not just in the Middle East and West Africa, where ISIS and Boko Haram wreak their Medieval mayhem. The West itself came under attack – and remains threatened.

The year began with the coldblooded slaughter in Paris of Charlie Hebdo cartoonists by a pair of jihadi brothers who announced, in flagrante delicto, that they were murdering for Islam, to avenge the Prophet Muhammad. Which did not stop pseudo-liberal apologists from leaping to their defense and trying to blame their atrocity on anything (including the brothers’ alleged “disenfranchisement” and “marginalization”) but Islam. A consortium of PEN writers protested their organization’s granting of a prize for courage to the magazine’s aggrieved survivors. Subsequently, however, one PEN writer, the marvelous novelist Jennifer Cody Epstein, wised up and publicly recanted, winning praise from Salman Rushdie and undying affection from the world’s beleaguered rationalist community. She gave us one of the few bright moments of 2015.

Yet some weeks later an Islamist attacked a free speech conference in Copenhagen, opening fire and murdering one person while FEMEN leader Inna Shevchenko was speaking. Police shot him dead later that night, but not before he had attacked a synagogue, killing another. Then, in Garland, Texas, two jihadis besieged Pamela Geller’s “Draw Muhammad” contest, but police cut them down before they could enter the premises.

Nota bene as regards Geller’s contest. The facts could not have been clearer: jihadis sought to murder people there for exercising their constitutional right to free speech. This did not prevent a CNN anchor from trying to indict Geller on air, on charges of “provocation.” Even Donald Trump eventually jumped in, chastising her on a Fox News show for “taunting” Muslims. Which goes to show how much people are absorbing and observing Shariah, even in our secular republic.

The tragedies continued. In November an ISIS assault in Paris left 130 dead and 368 wounded, and an Islamist attack in San Bernardino killed 14 and injured 24. In the United States, where denouncers of “Islamophobia” have long endeavored to place criticism of the faith off limits, GOP contenders for the White House have seized on the resulting free-speech vacuum to stoke fear and win support, with Trump’s declarations on the matter of Muslim immigration requiring no summary here. To retrieve this issue from the Republicans, progressives need to engage in an honest dialogue about the doctrines of jihad and martyrdom and the violence stemming therefrom.

Yet Christians, if far less lethal (though as Colorado Springs and many other abortion-clinic shootings over the years have shown, not at all averse to violence), have also been up to no good. Franklin Graham, son of gay-marriage denouncer Reverend Billy Graham, abandoned the Republican party, fed up with its funding of Planned Parenthood, and demanded Christian candidates who support “biblical values.” Did he have in mind those Leviticus- and Deuteronomy-sanctioned values that condone stoning your daughter for not being a virgin on her wedding night and forcing women to marry their rapists, as well as genocide and slavery? Or was he referring to New Testament values, which endorse hating one’s parents (as required for salvation by Jesus), chopping off hands, and eternal punishment for trivial offenses?

Who knows? Maybe Franklin was engaging in a surreptitious bid for support. After all, ISIS shows us that such barbaric practices can draw lots of recruits, and not just in the Middle East. Young Westerners have been flocking to Syria to join them, and ISIS’s interpretation of Islam finds more and more adherents in the United States, with federal prosecutors, in 2015 alone, charging 73 people in 18 states in connection with the terrorist entity. Perhaps to counter them Franklin hopes to found the evangelical equivalent of the Saudi mutawa.

That religion retards children’s cognitive development has been well established: little ones indoctrinated to believe in miracles find it tough to distinguish fact from fiction. The remedy, according to the faith-deranged? Go one step further and start removing the teaching of facts from schools altogether, with bills introducing creationism into science classes now evolving, as it were, to better evade already porous legislative barricades against meddling with instruction in evolution. Presumably the Christians will fail to appreciate the irony in this, since they don’t understand evolution. Yet religious adults don’t stop at damaging their children’s cognitive capabilities; they also act in ways that imperil their health. A 2015 study showed that in 37 states where abstinence-only sex-ed is the rule, STDs are also the rule, with the Bible Belt (and especially Alabama and Louisiana) the worst off.

One of the biggest faith-infused brouhahas of 2015 involved the Christian reality TV show “19 Kids and Counting” star Josh Duggar and his alleged philandering and sororal molestations. The show, the family and Duggar almost seem to satirize themselves, and exist in a zone beyond humor, where one can only lament the repetitiveness of men-of-faith sex scandals, yet have no sympathy for the millions of viewers who bought the premise that turning the entirely natural act of coitus into a matter of scalding shame would lead to responsible behavior and well-adjusted adults. One thing, though: Ashley Madison and online porn played a role – proof that the Internet can at least keep some Christians away from their Sunday-morning indoctrination sessions, while simultaneously facilitating their outing as hypocrites. That’s progress of a sort.

Yet harbingers of real progress did emerge. The brave, indomitable Ayaan Hirsi Ali published “Heretic: Why Islam Needs a Reformation Now,” and one of New Atheism’s founders, the neuroscientist Sam Harris, put out, with former Islamist Maajid Nawaz, “Islam and the Future of Tolerance: A Dialogue.” Both tomes deal with the faith and what can be done to mitigate the extremism it produces. On religion and its discontents more generally, the University of Chicago evolutionary biologist (and 2015 Richard Dawkins Award winner) Jerry Coyne authored “Faith Versus Fact: Why Science and Religion are Incompatible,” a well-crafted vade mecum for all rationalists wishing to mount a cogent challenge to the religiously deluded. And David Silverman, president of American Atheists, helped close out the year on a positive note with his “Fighting God,” a polemic for firebrand atheism that will pour oil on faith’s funeral pyre. Yes, that pyre is already burning. The “Nones” are rising, as readers of this column know.

Unfortunately, though, the Pew Research Center now forecasts that atheists and the Nones, though increasing in number, will lose proportional ground to Muslims, who will rise from 1.6 billion today to 2.8 billion in 2050, putting them on a par with Christians.

This forecast -- and it is only that, a forecast – might beget despair among rationalists. But it should serve as a clarion call for advocating secularism, reason and atheism. We need to argue our case relentlessly, challenge the faith-deranged in every venue, and never lose sight of how free speech about religion can and does convert believers into nonbelievers.

We need to stress the indignity of religion. Superstitions ordaining us to submit to God are the enemies of human dignity. That God is wholly imaginary only compounds this indignity. Coddling the religiously deluded by showing “respect” for the undignified shams to which they are attached (denouncers of “Islamophobia” take note!) drags out the misery they impose on themselves and on the rest of us. In contrast to religious folk, we nonbelievers know how to live free and should never hesitate to point this out. Religion and freedom are incompatible. In fact, religion and true adulthood can’t coexist. One who shies away from bleak facts surrounding our time on Earth is really a child, no matter his or her age.

“No gods, no masters,” declared early feminist Margaret Sanger. Such is the slogan for human dignity and reason, whether we are male or female.

We should remember this during the upcoming year, which may be anything but easy.