The Chomsky argument -- for media, political and economic democracy -- is now well-known. Now to find action 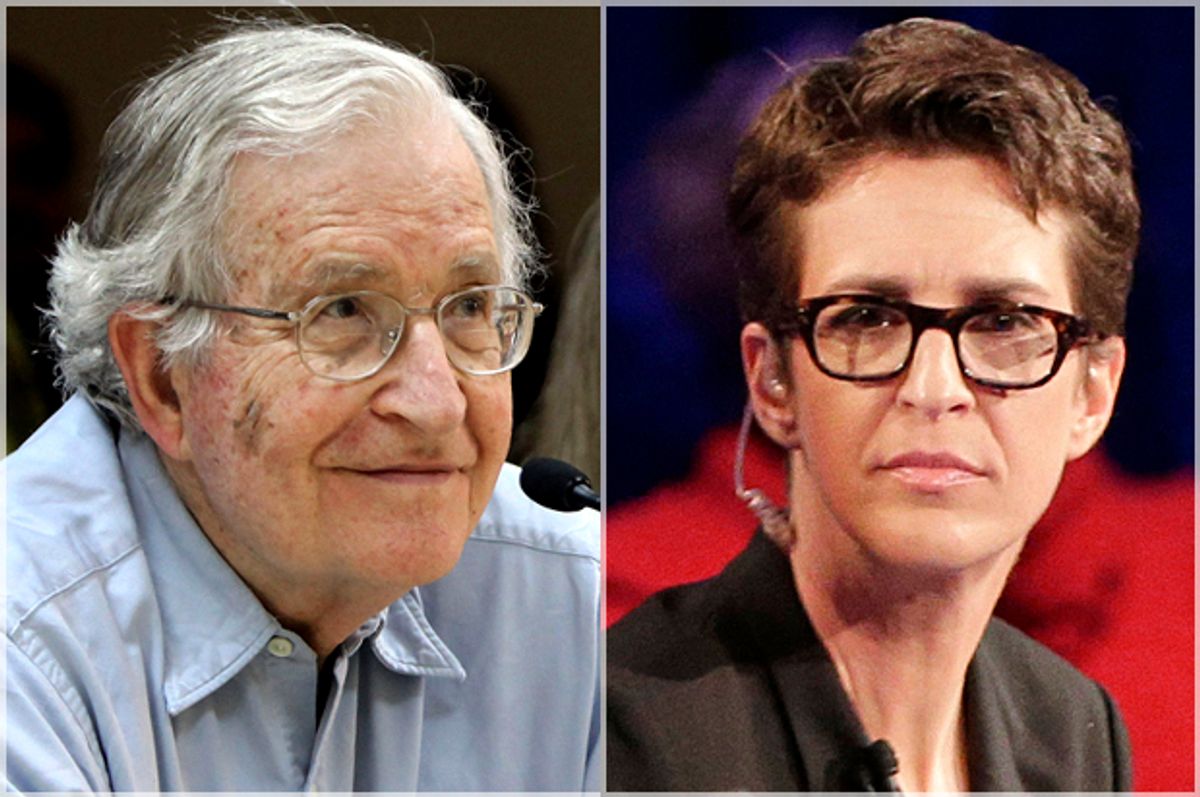 Excerpted from "The Boy Who Could Change the World: The Writings of Aaron Swartz"

Stanford, like many universities, maintains full employment for humanities professors by requiring new students to take their seminars. My heart burning with the pain of societal injustice, I chose the one on “Freedom, Equality, Difference.”

Most of the other students had no particular interest in the topic— they were just meeting the requirement. But a significant minority did: like me, they cared passionately about it. They were the conservatives, armed with endless citations on how affirmative action was undermining American meritocracy. The only other political attitude I noticed was a moderate centrism, the view espoused by the teacher, whose day job was studying just-war theory.

It quickly became clear that I was the only person even remotely on the left. And it wasn’t simply that the others disagreed with me; they couldn’t even understand me. I remember us discussing a scene in Invisible Man where a factory worker brags he’s so indispensable that when he was out sick the boss drove to his house and begged him to come back, agreeing to put him in charge. When I suggested Ellison might be implying that labor, not management, ought to run workplaces, the other students (and the teacher) didn’t just disagree—they found the idea incomprehensible. How could you run a factory without managers?

This is the reproduction of American intellectual culture: a large number of vocal and articulate conservatives, a handful of mushy moderately liberal centrists, and an audience that doesn’t much care. (Completing the picture, the teacher later shouted me down for bringing up inconvenient facts during a discussion of Vietnam.)

It’s a future that worries George Scialabba. He cares passionately about the humane left-wing tradition, but he’s forced to watch it shrivel. As he observes, the conservatives receive prominent places in industry (including industry-funded think tanks), the centrists are quarantined in hyperspecialized programs at universities, and the real leftists can barely get a toehold. (The Soviet Union fell, seems to be the dominant position. Why are you still here?)

The question is what to do about it. George hails the few exceptions (Noam Chomsky, Alexander Cockburn—names presumably picked to provoke) who have managed to eke out a niche exposing the falsehoods and bucking the consensus, getting pushed to the cultural margins for their trouble. Henry proposes a more technical version, where left-wing critics don’t argue to the public (which in practice seems to mean the 20,000 readers of Z Magazine) but instead to elites, especially disciplinary experts, using a field’s flaws against itself (à la Doug Henwood). And Michael seems to make the usual retort that such extremism never gets an audience, let alone an accomplishment—only incrementalism and realist accommodation to power will make a difference in people’s lives (perhaps Ezra Klein could be the poster boy here).

This debate is not dispassionate. It’s a muddy mix of trying to work out what to do with our lives and how to justify what we’ve already done. Personally, I adore Chomsky, Henwood, and Klein—I find both their writing and their personalities incredibly inspirational. And while I could quibble with their strategies, it’s difficult for me to imagine, let alone desire, a world in which they did anything particularly different. But my own plans—forged in that Stanford classroom and (to my surprise) unshakable ever since—take a different tack.

A new media world is emerging. The mainstream media outlets that won’t even bother to print Chomsky’s response when they libel him are fading, while alternative media explodes. Alexander Cockburn publishes not one, but a dozen articles each day at CounterPunch.org. Amy Goodman has a daily television news show carried on over 700 stations. There’s a whole Chomsky industry, which gets at least a shelf even at suburban chain bookstores. Socialist-feminists like Barbara Ehrenreich write New York Times bestsellers. Hell, we even have a socialist U.S. senator now!

Then there’s the whole new generation of political bloggers. Daily Kos, Atrios, and so on have a combined readership in the millions and are all consistently venomous toward the bulk of the Democratic Party and the media. Their work is broadcast nightly on major networks by Jon Stewart and Rachel Maddow. (The West Wing even made Atrios a character.) Even Scialabba admits (although not in his book) that if he wants to spend time with like-minded friends, he heads to Crooked Timber.

But while this clearly has a salutary effect on mainstream political culture (witness Stephen Kinzer’s transformation from Noam Chomsky’s bête noire to Amy Goodman’s guest), it hasn’t exactly created an alternative culture of its own. Conservatives, centrists, liberals— they all repeat their fundamental premise: We’ve got a pretty good system going here. Sure, there may be some trouble around the edges (liberals think more, conservatives think less), but, as McCain said, the fundamentals are still strong. The lines are so well publicized that even college freshmen can repeat them down to the sound bite.

The left has succeeded in making it sound hollow and unconvincing. Your average liberal blogger is happy to admit all the papers are full of lies, all the politicians are bland sellouts, and the government is run by lobbyists and corporate hacks. And (nothing new here) your average citizen is happy to agree (it takes a lot of education to be dumb enough to think otherwise). But where do you go from there? Elect Howard Dean?

The Popular Front is long dead, the labor unions have all but fizzled out, the New Left never had much of a plan (“We must name that system,” SDS cried. “We must name it, describe it, analyze it, understand it and change it”; apparently they never got past naming) and barely even exists anymore. The term socialism has become so watered down that it polls roughly equal with capitalism among the under-30 set—apparently it now means anything to the left of austere neoliberalism (except file sharing, of course).

If there was ever a time for a new program, this would seem to be it. The economic crisis has shattered the Washington Consensus more than a thousand Chomsky op-eds could, while the Internet has made it possible to organize people by the million. But the left can’t seem to move beyond its reactive stance. If you want books that criticize the policies of the Bush administration, you can fill up a whole library. But if you want books on what to do instead, where do you go? The only left-of-center group seriously putting out policy proposals is Third Way. (Sample recommendation: “Moderniz[e] our intelligence force . . . [hold a p]ress conference highlighting the 20th anniversary of the creation of al Qaeda.”)

There is a coherent, alternative ideology on the left. Scialabba, summarizing Chomsky, even takes a stab at laying it out: “The fundamental purpose of American foreign policy has all along been to maintain a favorable investment climate . . . the American intelligentsia, though less harshly and clumsily regulated than its Soviet counterpart, has been no less effectively subordinated to the goals of the state.” (I would add only that the domestic economy is structured to make the majority of the population expendable servants of the rich.) Scialabba lays it out, but Chomsky (as far as I can find) never does.

I’ll even go further and take a stab at describing Chomsky’s solution: democracy. Media democracy, to prevent the population from being misled by deluded elites with big megaphones. Economic democracy, to promote a better mix and fairer distribution of societal goods and necessary evils. And political democracy, so that our military isn’t led by murderous thugs into endless immoral engagements.

This philosophy is so different from the dominant consensus that it takes far more than two paragraphs to explain, let alone argue for. But who’s even trying? Instead, the audience is forced to read a shelf of Chomsky and reverse-engineer the principles behind it.

This is better than nothing—it worked for me—but it obviously puts a hard limit on who can be persuaded. People without the time or the ability end up as the folks you see in liberal blog comments: people who know something is badly wrong, but aren’t quite sure what it is or what to do about it.

In short, leftist intellectuals need to move from simply poking holes in the dominant consensus to clearly articulating their alternative and proposing a concrete method for promoting it (Chomsky, for all his brilliance, seems to espouse a theory of change that doesn’t go much beyond getting people at his book readings to join the local ISM chapter). I hope that more people will, because I sometimes fear that if they don’t, there may not be many leftist intellectuals anymore.

Copyright © 2016 by Sean Parmer. This excerpt originally appeared in "The Boy Who Could Change the World: The Writings of Aaron Swartz," published by The New Press. Reprinted here with permission. All rights reserved.