All they want to do is screw over the president: Ryan, McConnell confirm they have no real agenda in '16 besides blocking Obama

The only goal of Republicans in Congress the last 7 years has been to stymie Obama, 2016 will be no different 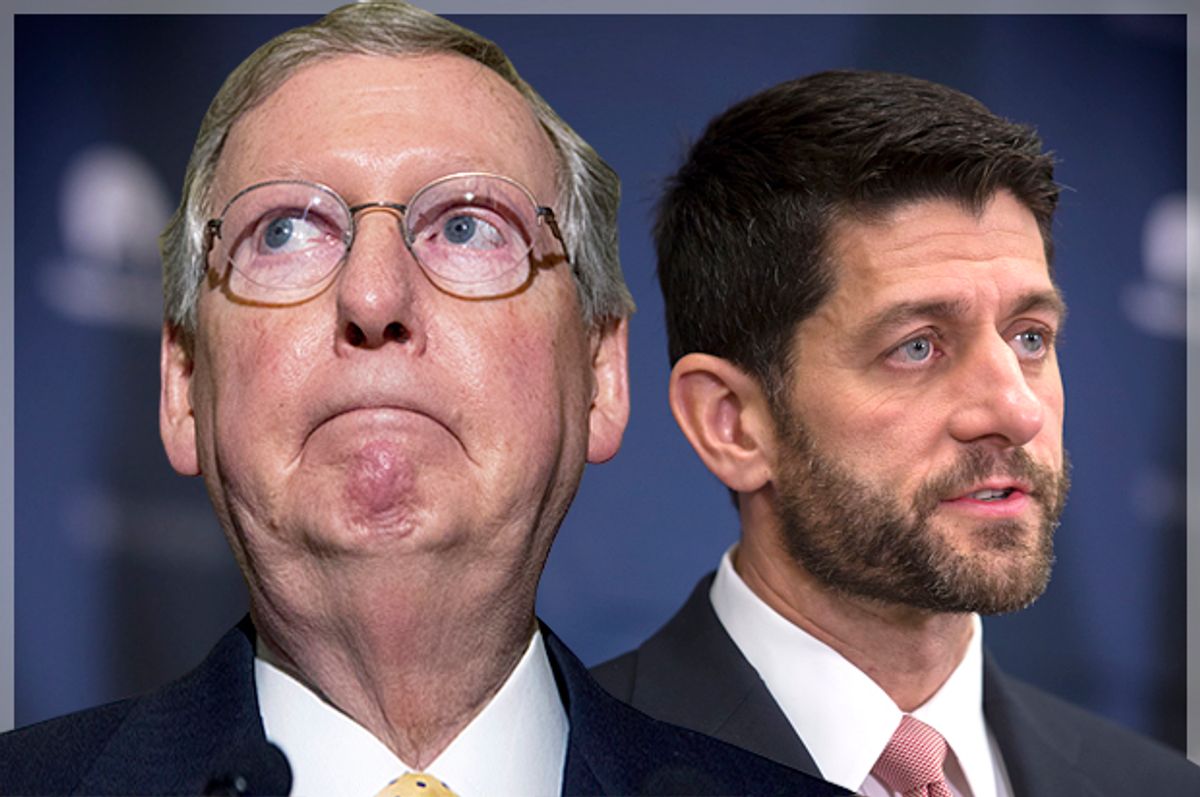 Since President Obama took office, Congressional Republicans have made it their business to obstruct everything he does. Senate Majority Leader Mitch McConnell said it best in 2012: “Our top political priority over the next two years should be to deny President Obama a second term.”

And that’s how they’ve governed in the Obama era. Like political arsonists, they’ve pursued no real positive agenda, choosing instead to undermine the president and stage symbolic protest votes to appease a disillusioned base. This is a big reason why something like 13 percent of the country approves of the job Congress is doing.

For a brief moment, when Paul Ryan was elected Speaker of the House, there was hope that things might change, if only a little. Although Ryan is hardly a moderate, he is nonetheless a serious legislator. His victory, one hoped, was a sign that House Republicans finally saw the light, finally realized that obstructionism wasn’t a viable governing philosophy.

There were already rumbles in conservative circles after Ryan agreed to pass $1.1 trillion spending bill earlier this month. To the hardliners on the right, any deal that removed the threat of a government shutdown constituted a gutless compromise, a conservative heresy.

Now it appears that Ryan earned the faint support of Congressional Republicans by promising to get back to the business of negation and legislative navel-gazing. This was evident in Ryan’s statement about his plans for Congress in January:

“When we return in January, the House will put an ObamaCare repeal bill on the floor and pass it and put it on the president’s desk…We are going to keep working to give families relief from this law while we work to dismantle and replace it altogether."

Keep in mind that a Republican-led Congress has already tried 56 times to repeal ObamaCare, knowing they never had the veto-proof majority they need. Each of these votes, like the recent Benghazi hearing, was a masturbatory exercise in political theater. Achieving a tangible legislative outcome was never the goal; instead, they were blinkered protest events, designed to please the Tea Party wing of the GOP.

And that’s exactly what the latest ObamaCare repeal will be. Indeed, as Ryan must know, Obama will surely veto this bill the minute it hits his desk. But if the aim isn't to pass any laws, then that doesn't matter — it's enough to toss some red meat at the base.

It seems the Ryan-led House will not be much different than it was under John Boehner. In addition to pointless votes on ObamaCare, on which the Supreme Court has already ruled, Ryan’s bill will also call for the defunding of Planned Parenthood – again. Knowing the bill won’t pass, Ryan is promising a separate vote on the Abortion Non-Discrimination Act, which “would provide protections for organizations that have conscience objections to covering abortions in their insurance plans.” The ANDA is essentially a more invasive version of Hobby Lobby’s anti-contraception measures.

On the Senate side, Leader McConnell has already indicated his intention to placate hardliners by focusing on an anti-refugee bill after the holiday break. As The Hill’s Jordain Carney reported: “House Republicans had suggested that McConnell had made a commitment to move refugee legislation, with House Homeland Security Committee Chairman Michael McCaul (R-Texas) telling reporters that the Kentucky Republican ‘has given us assurances that he would move the bill separately in the Senate when we return in January.’” Given the rank paranoia surrounding this issue, it's hard to imagine this debate achieving much of anything. This will be another exercise in fear-mongering, something to stoke political flames on both sides.

Any hope that Congress would try to accomplish things (read: compromise) in Obama’s final year of office has already been shattered. It will be more of the same, unfortunately. Speaker Ryan may have been earnest in his desire to make Congress work again, but the Tea Party caucus won't allow it, and that should surprise no one.