They're traitors: Let's call the Oregon standoff what it really is — domestic terrorism

This is not a peaceful protest, these faux freedom fighters are drunk on dreams of revolution 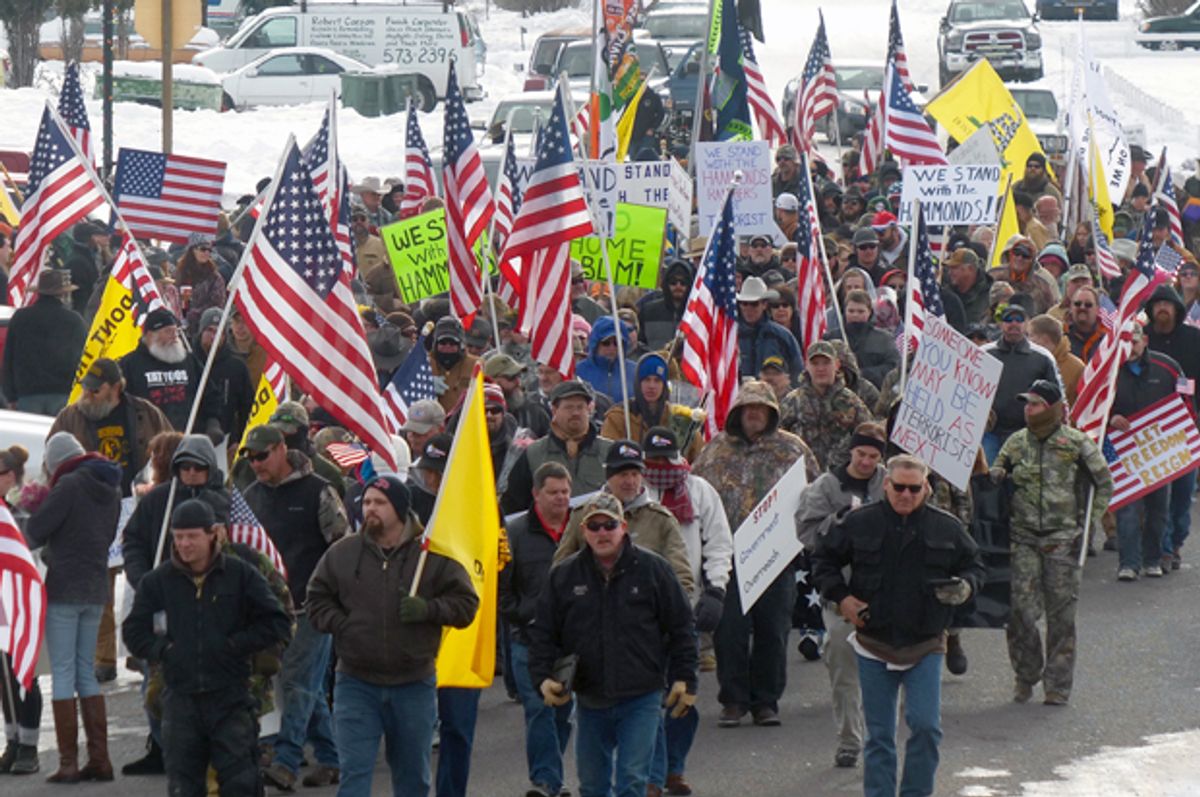 Jackasses with guns occupied a federal building in eastern Oregon over the weekend. What began as a protest event in support of Dwight and Steven Hammond (father-and-son ranchers who were convicted of arson) quickly shape-shifted into armed sedition, with something like 100 militiamen seizing the unoccupied headquarters of the Malheur National Wildlife Refuge.

A report from The Oregonian sums up the details:

“The Bundy family of Nevada joined with hard-core militiamen Saturday to take over the headquarters of the Malheur National Wildlife Refuge, vowing to occupy the remote federal outpost 30 miles southeast of Burns for years. The occupation came shortly after an estimated 300 marchers — militia and local citizens both — paraded through Burns to protest the prosecution of two Harney County ranchers, Dwight Hammond Jr. and Steven Hammond, who are to report to prison on Monday. Among the occupiers is Ammon Bundy, son of Nevada rancher Cliven Bundy, and two of his brothers. Militia members at the refuge claimed they had as many as 100 supporters with them. The refuge, federal property managed by the U.S. Fish and Wildlife Service, was closed and unoccupied for the holiday weekend.”

The Bundy clan made headlines in 2014 when Cliven Bundy ignored federal mandates and continued grazing his cattle on disputed lands. The subsequent standoff become a flash point for right-wing survivalists, whose entire existence seems to be rooted in false narratives about individual liberty and state tyranny.

The blockheads who arrived in Nevada last year, like the faux freedom fighters in Oregon now, are drunk on dreams of revolution. They live incredibly privileged lives and know nothing of actual tyranny, but delusions of grandeur and a lack of productive hobbies keeps them eternally vigilant against non-threats wherever they find them. And thanks to the cavalcade of crackpots in conservative media, the imaginary hazards are everywhere.

In any event, what's happening in Oregon is a massive story. These men are looters and traitors. They're occupying a wildlife sanctuary against the wishes of the people who live there and in defiance of federal law. And they're defending two men who burned land they didn't own after illegally grazing cattle on it for decades. Unlike other protests, moreover, these militiamen are explicitly threatening to use force if authorities attempt to remove them. "We will be here as long as it takes," Ammon Bundy said. "We have no intentions of using force upon anyone, (but) if force is used against us, we would defend ourselves." Translation: We're breaking the law and we're going to continue breaking the law, and if the authorities try to do their jobs, we'll shoot them.

This is not a peaceful protest, in other words. Occupy Wall Street was a peaceful protest. The Black Lives Matter movement was and is a peaceful protest. Whatever you think of the politics of Occupy Wall Street and BLM, these campaigns are in the tradition of civil disobedience and pose no threat to anyone. If the protesters in Zuccotti Park or Ferguson, Missouri arrived in military fatigues with pistols in their pockets, they would've crossed a legal line, and the reaction – from the media and the police – would have been dramatically different.

The Oregon standoff, as Charles Pierce ably noted, "is an act of armed sedition against lawful authority.” And yet the media is largely ambivalent. This should be the front page story on every major media outlet. Cable news should cover this unceasingly until it's resolved, as they've covered so many other less important events. But that's not happening. As Vox reported, the reactions have been curiously subdued. Whether it's the AP or the New York Times or Fox News, the Oregon story has been an afterthought. The reactions on right-wing talk radio this week, one can assume, will be either similarly muffled or largely supportive.

That the media's reaction to Oregon is mostly muted tells you everything you need to know about the double standards at work here. This is textbook domestic terrorism, but it's not identified as such because terrorism, increasingly, is about the actors, not the acts. As Salon's Chauncey Devega observed, if this were anything other than white men, this would be called what it is, and the federal response would be overwhelming.

No, these militiamen are not the same as ISIS. And no, they haven't killed anyone – not yet, at least. But they're occupying a federal building and using the threat of violence to coerce and intimidate the government. That's terrorism, and that's all it is. That they fancy themselves patriots and carry a pocket constitution means absolutely nothing. They're breaking laws they don't understand in defense of lands they mistakenly believe they're entitled to, and their self-righteousness doesn't obviate any of that.

These are armed domestic terrorists, and that's exactly what we should call them.