Delusional over "Parks and Recreation": Sorry conservatives, but Leslie Knope is not a fascist 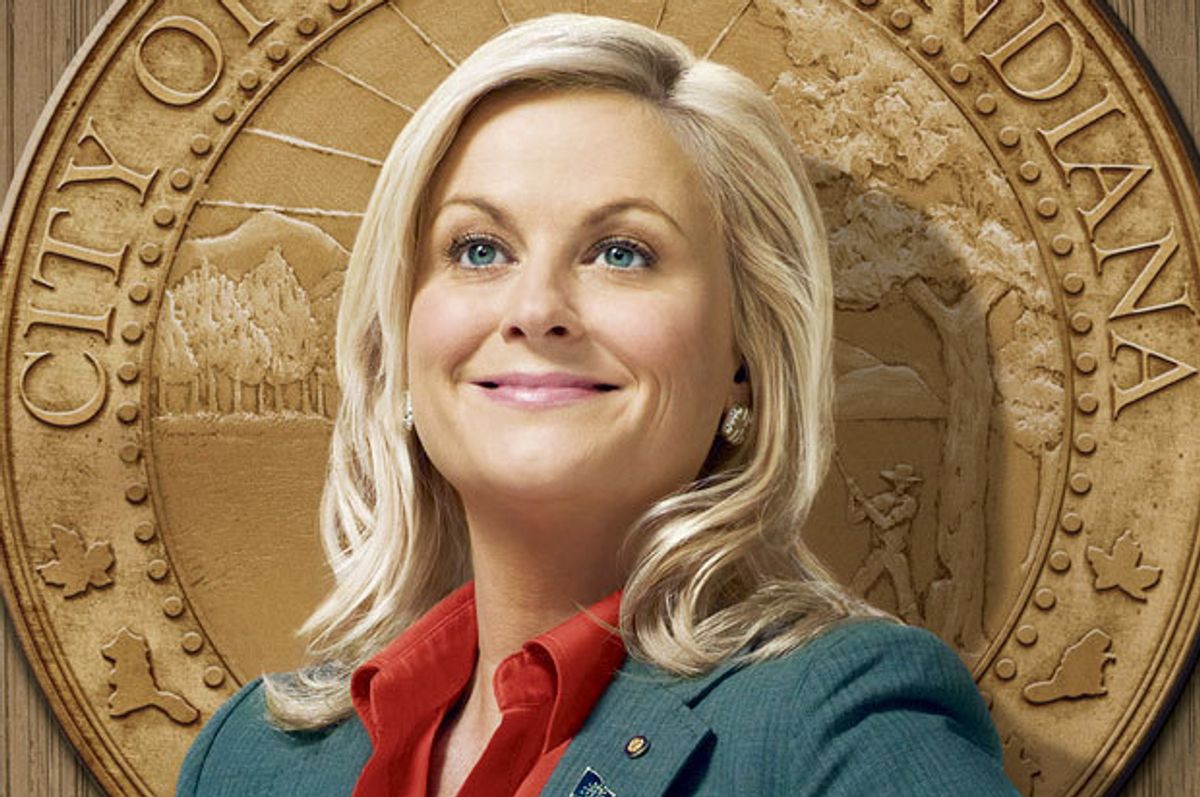 At the beginning of what is an otherwise generic critique of the latent authoritarianism that supposedly dwells within every progressive, Federalist senior editor Dave Harsanyi tries his hand at a pop culture reference. It’s a little awkward, and I certainly doubt that it’ll change anyone’s mind. But because it involves a serious misunderstanding of a term that is increasingly prominent in U.S. politics, I think it’s worth a moment of our time, nevertheless.

With at least a little tongue in cheek, Harsanyi argues that “Parks & Recreation,” the popular NBC show that ended its run in February of last year — hey, I never said it was a topical pop culture reference — is not the cute and cuddly sitcom that people think. No, underneath its warm and friendly exterior, Harsanyi warns, beats the dark heart of fascism. He writes (spoiler alert for those of you even less “with it” than he):

Over the winter break I finally got around to binge-watching “Parks and Recreation.” In case you missed the show’s seven-year run, it’s about a fascistic, small-town councilwoman who believes it’s a politician’s job to impose her notions of morality, safety, and decency on everyone, no matter what voters want or what the system dictates. She is justifiably recalled by the people of her town after attempting to regulate portion sizes at fast food restaurants, but ends up running a federal office where she can do big things without the consent of the people.

Now, I bailed on “Parks & Rec” around season four (no judgments on anyone who stuck with it throughout; I just thought it got a little saccharine). So I can’t really speak to whether Harsanyi’s recap is accurate so far as the show goes. What I can tell you, though, is that describing Amy Poehler’s Leslie Knope character as “fascistic” is utterly absurd. And even if, as I suspect, Harsanyi was half joking, he still reflects how confused many right-wingers are when it comes to fascism.

In their limited defense, they’re far from the only ones. Liberals don’t do it so much anymore, but they used to toss the f-word around with perhaps too much abandon.  Even academics can’t quite agree on a specific definition; as the historian Ian Kershaw recently wrote, defining the term “is like trying to nail jelly to the wall.” Fascism, then, like most important concepts in politics, is more art than science.

Still, there are degrees of difficulty. Determining whether General Francisco Franco was a bona fide fascist, or “merely” an extremist right-wing authoritarian, is hard; deciding whether Leslie Knope — a bubbly and thoroughly conventional busybody goo-goo — is fascist, meanwhile, is not. Unless you think “fascism” is just another word for being willing to impose your views through the power of the state.

Conservative democracy-skeptic that he is, Harsanyi comes right up to the edge of making that argument. Knope is fascistic, he writes, not because of any specific policy she supports  (like, say, invading the Soviet Union and annexing much of its territory) but because she believes in public service — “a preposterous term,” according to Harsanyi, “that treats politics as if it were a sacrifice without pay, power, or prestige.”

That’s about it as far as Harsanyi goes with Knope before his piece segues into a lot of anti-Obama boilerplate. And since the reader is clearly meant to infer that Knope’s “fascistic” inclinations are shared by the current president, we’re left to conclude that the reason Obama and Knope are “fascistic” is because they believe in public service — i.e., that the government is not always and inherently alien, illegitimate, and corrupt. This, apparently, is now what fascism is.

Here’s the thing, though: That’s not fascism. Not even a little bit. Again: there’s no one, uncontested definition of the term. But according to Vox’s Dylan Matthews, who spoke to some experts on the subject late last year for a piece about Donald Trump, in order to be a fascist, one must be some or all of the following: anti-democratic, anti-individualist, pro-extralegal violence, and utopian. Believing in public service, you’ll notice, is not on that list.

By this point, however, you may be wondering why you should give a damn that some ultra-conservative editor at some ultra-conservative website has a bad take. And in the grand scheme of things, you probably shouldn’t! But if you’re worried, as you should be, about the general direction of American politics — and, specifically, about the rising popularity of unvarnished ethno-nationalism on the right — then this fight over words is worth your attention.

Why? Because the more we forget what “fascism” actually represents, and the more we allow any kind of communal politics to be smeared with the label, the harder it will be to recognize real-deal fascism where it exists. (Hint: not Pawnee.)