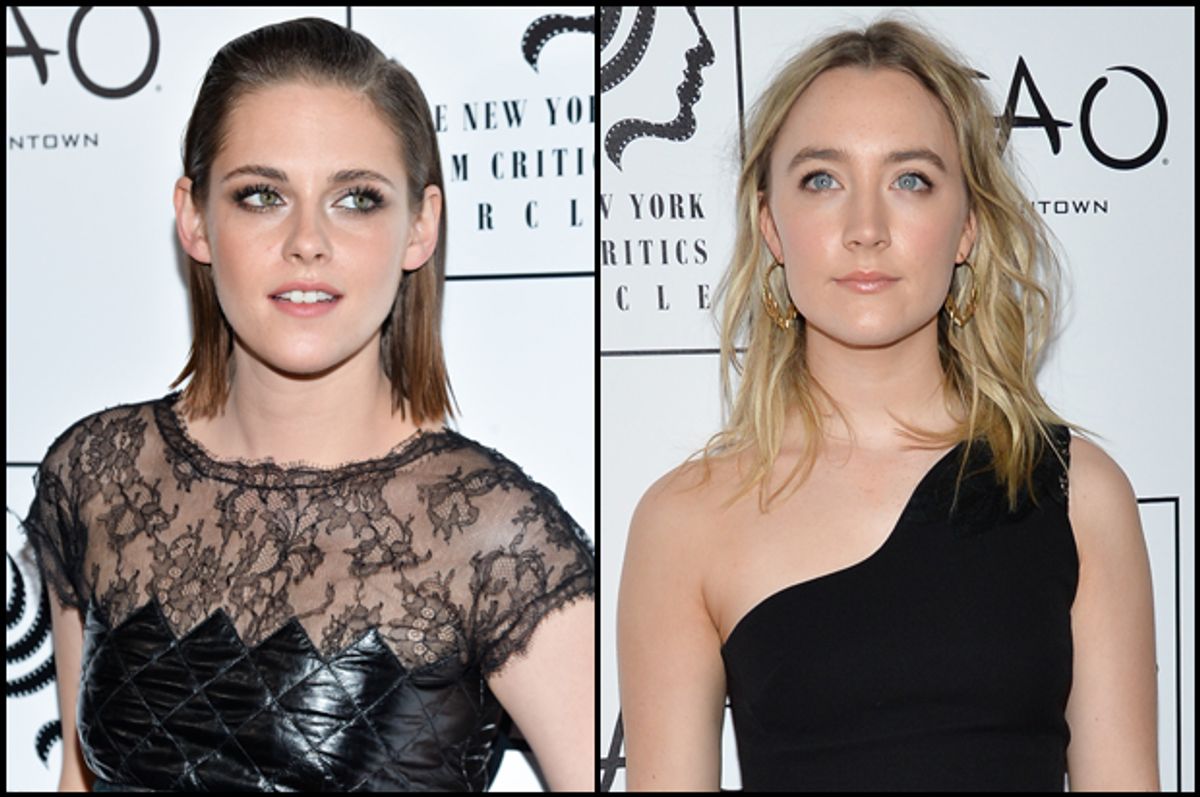 Winter has arrived with a sudden bang on the East Coast, but sub-freezing temperatures in Manhattan did not deter the paparazzi and autograph seekers lingering outside Monday night’s New York Film Critics Circle awards dinner. As my companion and I were hurrying down the Ninth Avenue sidewalk toward the promise of a heated indoor space and free cocktails, a young man with a dossier of photographs and memorabilia approached me hopefully. “Excuse me,” he said. “Are you Mr. Docter?” Not a great moment in Mistaken for a Famous Person, I have to say: He thought I was the director of “Inside Out.” This guy. (Who is a fine filmmaker and a terrific person, I have no doubt.)

Admittedly it’s not all that likely anyone would confuse me with Kristen Stewart, who was on hand to accept the NYFCC’s supporting actress award for her role opposite Juliette Binoche in French director Olivier Assayas’ “Clouds of Sils Maria” and gave a concise, funny and intelligent speech that was probably the highlight of the evening. “I’ve received a lot of MTV Popcorn Awards and stuff like that,” Stewart said, “but this is a little different. No, really: Thanks, babe.”

When I interviewed Stewart a few years ago, I asked her whether there was an alternate version of her career in which the actress from “Adventureland” had kept on doing low- to mid-budget independent films. She said she thought that basically was her career, despite the interruption of a certain vampire-centric franchise. (Which began, lest we forget, with a mid-budget independent film directed by Catherine Hardwicke.) Now it seems that she wasn’t kidding.

In her remarks on Monday night, Stewart said she was grateful to have met Brazilian filmmaker Walter Salles, who directed her in “On the Road” and then introduced her to Assayas. “These are the kind of people I should be working with, people who really pull it out of you,” she said. Casting one of the world’s most recognizable faces as the personal assistant to a movie star may sound like some kind of postmodern joke about celebrity culture, but despite its obvious debt to “All About Eve,” “Clouds of Sils Maria” is nothing like that. “This movie is thoughtful and quiet and kind of diagonal,” Stewart concluded. “I’m really grateful you guys saw it and got it.”

Some of the celebutainment journalists attending Monday’s star-studded event may have lamented the absence of any headline-grabbing controversy or memorably profane anecdotes. Within recent memory, we have had a former NYFCC chairman expelled from the group for allegedly heckling presenters and honorees (or at any rate for permitting his friends and guests to do so). We’ve had Kathryn Bigelow surrounded by people eager to debate the pros and cons of “Zero Dark Thirty,” minutes after receiving the best-director award. We had James Gandolfini, in his final public appearance, deliver a scabrous, scatological account of the reality of life on a movie set. We’ve had Brad Pitt tell an amusing story about his first visit to New York, when he stayed with a friend on Christopher Street but didn’t quite get the picture: “There are so many good-looking guys in this neighborhood! And they’re all so nice!”

Nothing happened to compete with those moments at Monday’s seamlessly smooth event, which was largely a love-fest for Todd Haynes’ 1950s lesbian romance “Carol,” a movie pretty much designed to appeal to the tastes and inclinations of this group. (Mea maxima everything: “Carol” was my No. 1 for the year too.) The NYFCC’s awards were announced weeks ago, so we already knew that “Carol” had won best picture, best director, best screenplay and best cinematography. I’m honestly surprised that neither Cate Blanchett nor Rooney Mara won an acting award. To some extent they may have canceled each other out, which is also likely to happen in the Oscar race.

Screenwriter Phyllis Nagy, who spent more than a decade trying to turn Patricia Highsmith’s semi-suppressed novel “The Price of Salt” into a movie, delivered a moving account of her filmgoing childhood in New York — watching double bills at the old St. Marks Cinema and buying candy and soda at Gem Spa — and the long artistic struggle that led her to leave the city behind, and then to write one of the ultimate New York cinematic love stories. Producer and indie legend Christine Vachon talked about meeting Haynes years ago when they were both undergraduates at Brown—and not particularly liking him, at least until she saw his legendary 1987 student film, “Superstar: The Karen Carpenter Story.”

Perhaps smarting just a little from the Oscar he didn’t win for “Birdman,” Michael Keaton posed with his NYFCC best-actor award as a crusading Boston Globe editor in “Spotlight” and announced, “Gloating is underrated.” Keaton is very good in that film, but without betraying any confidences of the Critics Circle process I think I can say that his prize was something of a compromise choice. (Leonardo DiCaprio’s near-wordless role in Alejandro G. Iñárritu's “The Revenant” is surely still the leading Oscar candidate.)

Accepting her best-actress award for the season’s other winsome 1950s New York romance, John Crowley’s “Brooklyn,” 21-year-old Saoirse Ronan poured on her rural-Ireland accent while reminding us that she is actually a native New Yorker. True story! Ronan was born in the Bronx, but her parents returned to County Carlow, in the southeastern Irish midlands, when she was 3 years old. “I can’t say I remember that much about it,” she reported gamely. “But I’m one of you! ‘Saoirse From the Block’ is what they call me.” (If you find Ronan's given name daunting, it is pronounced SEER-sha, approximately, and means “freedom” or “liberty.” I can come up with much tougher Irish names if you want the advanced course.)

Various honorees did not show up in person, but not so much because they were too famous or important. Mark Rylance (best supporting actor for his marvelous turn as a Soviet agent in “Bridge of Spies”) is doing another film or rehearsing a play, wherever he is. Composer Ennio Morricone, who received a special award for his decades of contribution to cinema and music, is 87 years old and travels as little as possible. Legendary documentary filmmaker Frederick Wiseman, on the other hand, is barely a year younger than Morricone, but travels as much as possible. We gave Wiseman an award for “In Jackson Heights,” his marvelous three-hour social portrait of New York’s most diverse neighborhood (and probably the nation’s, or the world’s). He lives in the city as much as he lives anywhere, but sent a note of thanks saying he was busy making his next film — in Europe.

If there was an “only at the NYFCC dinner” moment, it was the long and irrelevant but thoroughly hilarious monologue delivered by Kevin Kline, while giving the cinematography award to Edward Lachman (who has shot Haynes’ last three features, as well as the HBO miniseries “Mildred Pierce”). Kline thanked us for sparing him the indignity of ever accepting an award over the course of his long and distinguished career, and assured us that he almost never notices cinematography. “When I watch a film, I only see the acting. And if I happen to be in it, I’m only paying attention to one particular actor.” It was an extended, elaborate in-joke on the nature of celebrity and the nature of this event, of the sort that works best on an inebriated audience that is feeling just a little too satisfied with itself. Yahtzee, Mr. Kline. In a puzzling but super-fun alternate universe, he would be the permanent host of the Oscars.

Oh, and I finally got a look at Pete Docter, who picked up the award for best animated film and was entirely pleasant. I’m willing to admit I resemble him a little, if there’s a payday in it somewhere down the line.