No happy ending in Oregon: We can't reward white, right-wing extremists every time they pull a gun and threaten violence

Bundy makes no bones about his goal to return the land to “the people”--ranchers, miners, loggers--nature be damned 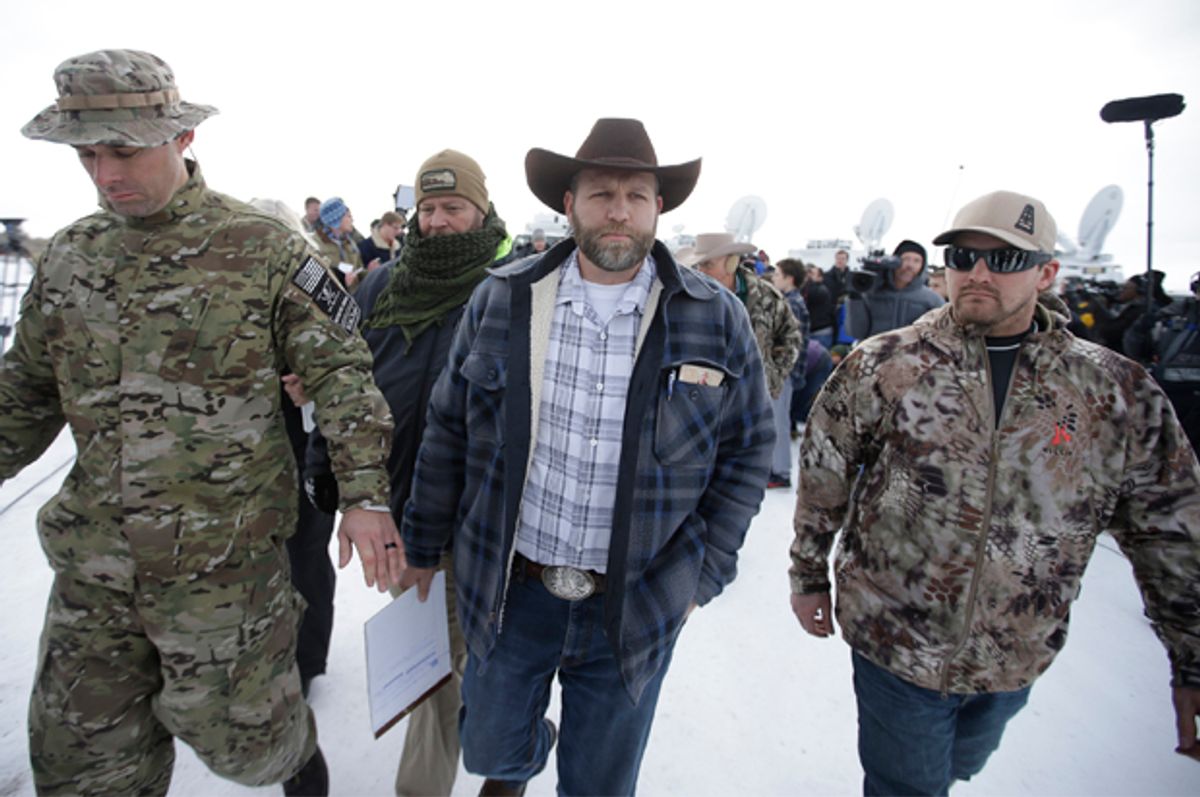 A group of heavily armed right-wing ranchers and self-described militiamen have occupied the Malheur National Wildlife Refuge near Burns, Oregon. Their stated purpose is to protest the jail sentence of father and son ranchers convicted of arson charges, Dwight and Steven Hammond. More important, they are protesting perceived overreach from the federal government.

Leading the occupation is Ammon Bundy, son of Cliven Bundy, the rancher who made headlines in April 2014 for his armed standoff with the Bureau of Land Management. No shots have been fired and the group has no hostages, but they insist they are ready to defend themselves against law enforcement and claim they have enough resources to occupy the refuge for years.

Harney County Sheriff Dave Ward issued a statement urging citizens to stay away from the area and promised that “a collective effort from multiple agencies is currently working on a solution.” According to the Oregonian, law enforcement has not divulged any information about how it plans to handle the situation. The refuge is property of the US Fish and Wildlife Service, meaning the FBI is in charge from a law enforcement perspective.

The story is so bizarre that most of the media doesn’t have any idea how to talk about it. Some are taking issue with the characterization of the occupiers as a militia. Others are quick to label them terrorists. Probably the most accurate word, given the group’s refusal to acknowledge the federal government, is separatists. Whatever they are, it’s worth comparing the white, Bundy-affiliated ranchers with black protesters and Occupy Wall Street.

When peaceful, unarmed protesters tried to make a statement in 2011 with the Occupy movement, their encampments were brutally dismantled by law enforcement. Police didn’t hesitate to use tear gas, rubber bullets and batons to clear them out. Nor was there any hesitation to call in the National Guard on Black Lives Matter protesters in Baltimore. So far, the Malheur occupiers are meeting no such resistance.

This discrepancy is important. Peaceful, left-wing protesters are fair game for state violence. But when armed anti-government zealots seize federal property and promise to defend themselves, law enforcement takes time for tact, maybe even negotiation. Perhaps this is wise given national embarrassments like Waco and the potential for an altercation to spark more widespread violence. The separatists are not unlike a cult themselves – so deeply committed to their ideology that they are willing to die for it.

What happened to the Hammonds could strike some as worth protesting. Several fires they started to manage growth on their ranch ended up consuming as much as 140 acres of public land. According to the Oregonian, the Hammonds were found guilty under a 1996 antiterrorism law but the judge disagreed with the characterization as terrorists and gave them light sentences. Federal lawyers appealed and the Hammonds were ordered back to prison to finish out the mandatory minimum sentence of five years.

But the Hammonds are just a cover for what Bundy and his associates are really after. In fact, the Hammond family disavowed association with the separatists. The endgame for the Bundy clan is turnover of federal land in the West to private citizens who claim the right to pillage it, ranch and graze on it, mine it, and cut down its timber without regulation or restriction.

And the Malheur occupation is just one leg in a much broader campaign to achieve these goals. A report by the Center for Western Priorities illuminates how a full-fledged movement to grab federal land for the states is forming, centered around right-wing extremists like the Oath Keepers, mining and timber company owners, and state representatives like Utah’s Ken Ivory.

In August, Oath Keepers arrived in Lincoln, Montana, to “protect” a mine on land managed by the US Forest Service. In May, Oath Keepers fended off the BLM at Sugar Pine Mine in Oregon. In both instances, the extreme antigovernment faction was summoned by the mines’ private owners, Intermountain Mining and Rick Barclay, respectively.

But the movement’s most high-profile victory came in 2014, when the Bundy ranch engaged in an armed standoff with the BLM over its threat to confiscate his cattle in partial payment for more than a million dollars in unpaid taxes and fees. No charges have been filed against Bundy or his men for aiming guns at federal agents, nothing has been paid, and no cattle have been collected. After that win, a clearly emboldened Ammon Bundy declared, “The war has just begun.”

Not only do the ranchers enjoy the protection of armed separatists, their movement has a great deal of support from right-wing politicians and media. Before Cliven Bundy’s racist tongue slipped, Sean Hannity was an enthusiastic supporter. GOP presidential candidate Rand Paul met with Bundy in 2014 and told supporters in Nevada he favored giving over federal land to the states, saying, “Maybe we can rearrange that so the federal government is out of your hair.”

Keeping government out of private citizens’ lives sounds great, but some regulations are essential. Particularly in an age when we should be enlightened about responsible land use and preservation, it’s more important than ever to see to it we aren’t over-mining or over-logging what remains of our virgin land. Such responsibility simply cannot be reliably entrusted to private power.

Ammon Bundy makes no bones about his goal of returning the land to “the people,” whom he defines as ranchers, miners and loggers. There’s no serious discussion of the commons as a philosophical principle or the fact that the land Bundy is claiming a right to was actually stolen on his ancestors’ behalf from the Paiute Indians by the very government he’s now protesting.

The movement is instead solely about giving the land over to private interests, which explains its support among the far right. It also partly explains why the government has such a high level of tolerance for right-wing movements while it bullies the left. Privatization is an aim that some elite-controlled sections of the US government can get behind. Social and communal movements of the left must be more adamantly discouraged.

There is hardly any conceivable happy ending. The government can’t simply hand these separatist ranchers another victory. Land being owned by the federal government is as close as Americans get to owning land communally. Victory for Bundy is a loss for nature and a tragedy for the commons. Maybe more important, we cannot reward white, right-wing extremists every time they pull a gun and threaten violence. And if there is bloodshed, there is real danger it will spread like the Hammonds’ own fire.