Romney unloads on Jeb: Mitt admits Bush never had a chance in 2016 — mostly because of George W. 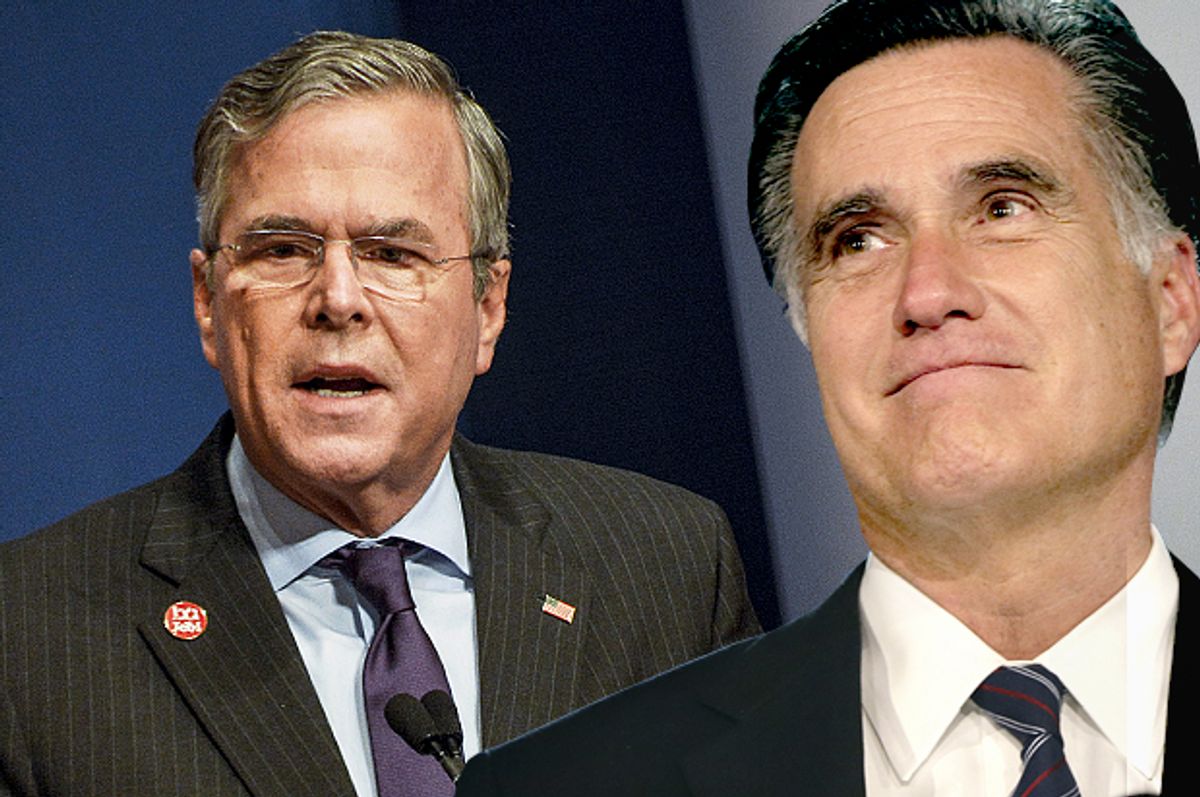 It turns out even Mitt Romney knew Jeb Bush couldn't win in 2016.

The former Republican nominee opened up in an interview with Dan Balz and Phillip Rucker of the Washington Post last week, and he was surprisingly candid about his friend and colleague, Jeb Bush. “A Bush-versus-Clinton head-to-head would be too easy for the Democrats,” Romney admitted to the reporters.

Jeb's problem was not so much his fitness for office but the looming shadow of his brother. “I like Jeb a lot, I think he'd be a great president,” Romney said, “but I felt he was unfairly but severely burdened by the W. years – and when I say the W. years, it's not only what happened to the economy, but the tragedy in Iraq.”

Romney recalled his sober remarks to Bush in a private conversation in January 2015: “Jeb, to be very honest, I think it's very hard for you to post up against Hillary Clinton and to separate yourself from the difficulty of the W. years and compare them with the Clinton years.” Perhaps unsurprisingly, Romney said Jeb's response was mostly dismissive: “He [Jeb] said he was going to make his campaign about the future, not about the past.”

“I didn't say anything at that point,” Romney remembered thinking, “But as he left, I said to myself, 'Gosh, in my opinion, it's not going to be as easy to make that separation as I think he gives the impression it will be.' One of the few things I predicted that turned out to be true.”

It's a testament to the insulating powers of groupthink that no one on Jeb's team listened to Romney or had the foresight to know how doomed this experiment was from the beginning. Everyone not named Bush could see the slow-motion trainwreck that was his future presidential campaign. And yet Bush walked blithely into the race, convinced it was his time and his turn.

In the wake of W.'s presidency, easily the worst in modern history, there was no reason to think the electorate was hungry for another Bush. The country was practically aflame when he left office, and Obama has spent the majority of his presidency cleaning up the mess. If Jeb wasn't willing to distance himself from this (and he clearly wasn't), then he had no business running. The notion that Jeb could somehow pirouette around his brother's record was ludicrous – no thinking person believed that.

Astonishingly, Jeb went a step further. Not only did he refuse to distance himself from W.'s record, he actually defended it. Recall his remarks during the second Republican debate, when he opined that his brother kept America safe. “You know what?,” he indignantly told Trump, “As it relates to my brother, there is one thing I know for sure, he kept us safe. I don’t know if you remember, Donald. You remember the rubble? You remember the firefighter with his arms around it? He sent a clear signal that the United States would be strong and fight Islamic terrorism and he did keep us safe.”

These were the words of a man living in a cocoon for the last 15 years. Jeb's historical amnesia may be shared by the Republican Party, but that doesn't make it any less false. That mountain of rubble was destroyed on W.'s watch. It was W. who ignored all the warnings and sat idly while the towers fell to the earth. A president who receives a daily briefing titled “Bin Laden determined to strike in U.S.” one month before Bin Laden struck in the U.S. failed to keep us safe. And a president who committed the biggest blunder in the history of American Foreign Policy (the Iraq War) most certainly failed to keep us safe.

Jeb's presidential bid was a bad idea in any case, whether he owned his brother's record or not. If he were honest with himself, he would have acknowledged that at the outset. Now the party is on the precipice, forced to choose between Trump and Cruz. As it happens, Romney may have been the GOP's best shot in 2016. He remains popular in several wings of the party, unlike any of the current establishment candidates, and he would be competitive in a general election. Romney only lost to Obama in 2012 by 4 percentage points in the popular vote. Against an incumbent party after two terms, he would be more than formidable. More importantly, without Bush in the race, Romney could have united the GOP donor class behind him from the very beginning.

At any rate, the Republican landscape would look dramatically different right now had Bush taken Romney's advice. But Jed didn't do that, and the results speak for themselves.