A gay "Star Wars" hero could save lives in this galaxy: Why the lip bite that launched a thousand 'ships matters

Fans are mining for clues that Poe Dameron, "Star Wars"' new hero pilot, has the hots for former Stormtrooper Finn 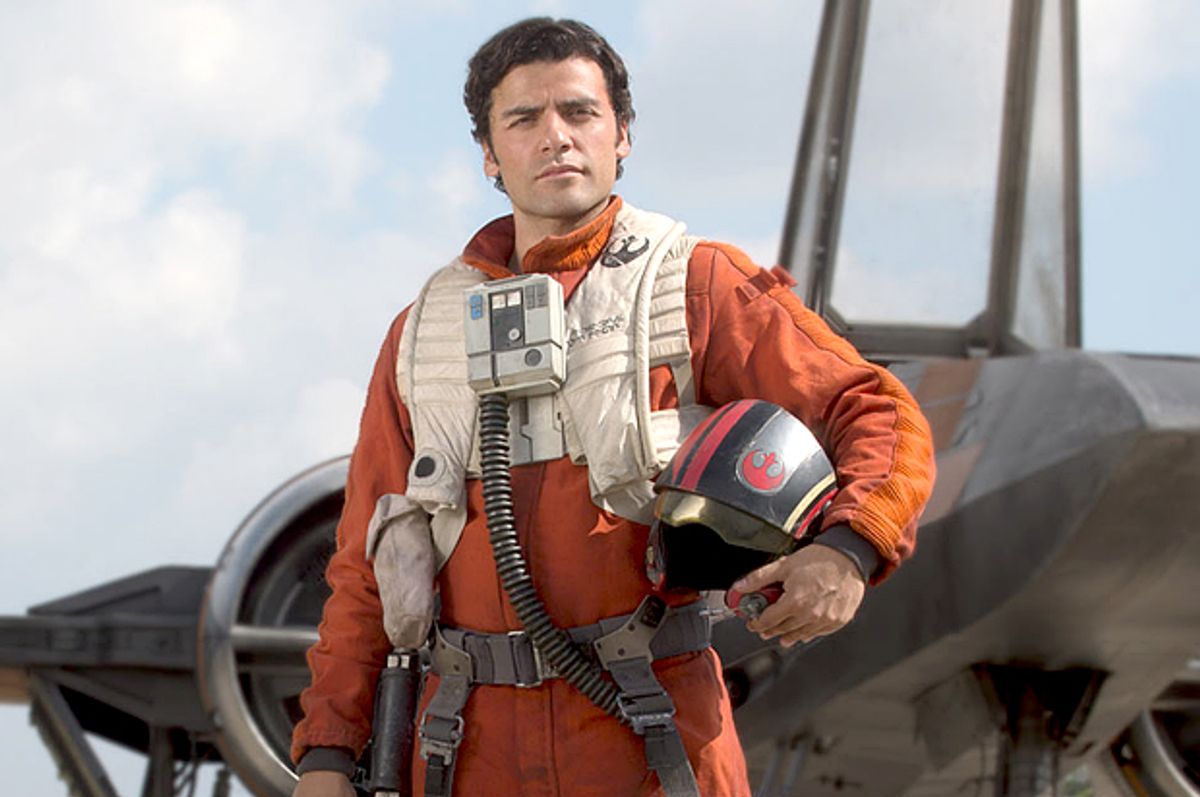 People are hailing “Star Wars: The Force Awakens” as a huge leap forward in onscreen diversity. The new protagonists include Rey, a heroine so capable that she does all the saving; Finn, a black leading man wielding blasters and lightsabers; and Poe Dameron, described as the Resistance’s “best pilot.” Dameron’s ethnicity isn’t stated in the film, but actor Oscar Isaac is a Guatemalan American. Beyond the new leads, you see women and people of color throughout “The Force Awakens”: flying X-wings, commanding Stormtroopers, examining schematics, and doling out mystical advice. But one group still absent from this galaxy far, far away is the LGBT+ crowd.

Of course, a character’s sexuality has to be expressed to be visible— Rey can be perceived as a woman shooting a blaster without ever saying she’s a woman. Finn doesn’t have to stop and give a lecture on the history of racial aggression on Coruscant to be seen as black.

And to be fair, romantic entanglements are pretty light all around in “The Force Awakens.” In one brief moment Finn asks Rey if she has a boyfriend — the clearest nod toward a standard romantic plot. Other evidence is even sketchier — hugs and shrugs and knowing looks from Han Solo. This leaves a lot of room for people to read other possible romantic relationships blooming between the lines, and a legion of increasingly vocal fans believe they are seeing “Star Wars”’ first onscreen LGBT+ representation in Poe Dameron, expressed by his special friendship with escaped Stormtrooper Finn.

Before we examine the evidence, let’s look at the particular behaviors in fandom that create the sort of online fervor that is the Poe x Finn phenomenon.

Every ardent fan has at some point wanted to see their two favorite characters get together —the time-honored act of imagining your two favorites falling in love, or “’shipping.” Many fans go even one step further into fan fiction, writing stories or creating art that depicts the love they have imagined. Fan fiction take the shape of any kind of story, but love and sex stories are probably the most popular.

The subgenre of slash fiction, which takes two presumably straight characters and imagines their homosexual love, exists for every popular franchise, too. (Go ahead and google “Spock slash Kirk.”) Slash fiction has a particularly strong presence on the Internet, perhaps because LGBT+ people are still used to reading between the lines for their onscreen representation. So it didn’t take long for fans, some whom are LGBT+ themselves, and some who just long for more inclusive representation of gender and sexuality, to start shipping Poe and Finn. And the slash followed soon there after. Here’s a little PG taste.

But is this just fan fiction or will Poe Dameron help “Star Wars” finally explore the final frontier of gender and sexuality? (Yes. I know that’s a “Star Trek” reference.)

The onscreen evidence that most fans point to is the reunion moment between Poe and Finn on the planet D’Qar. The two men had met and bonded briefly at the start of the film, when they escaped together from the First Order — Poe as a prisoner and Finn as a defecting Stormtrooper who needed a pilot. They crashed, and Poe appeared to die. Finn wore Poe’s jacket until the two are reunited through the Resistance, when Poe tells him, “Hey, that’s my jacket. No, no. Keep it. It suits you.”

But it’s all about how Oscar Isaac delivers the line. Let’s examine that moment again, with blocking.

FINN: (starts to take off jacket)

Is it getting hot in here? Let’s zoom in further.

That lip bite is everything. It’s a look that caused fans to launch a thousand 'ships, and it’s pretty suggestive all by itself. But even before “The Force Awakens” was released, the stars went on a publicity tour that included a stop on Ellen, where Isaac talked about his character having a love interest in the film. “I think it’s very a subtle romance that’s happening. You have to just look very closely, you have to watch it a few times to see the little hints, but there was. At least, I was playing romance.”

Now, Isaac is just an actor. He’s not in charge of writing or directing, so he doesn’t have the final say on his character’s arc. And he’s frequently playful with the press — in the same interview he jokes that maybe his love interest is the adorable droid BB-8. So his statement should be taken with a big grain of salt, not proclaimed as canon.

But do I need to remind you?

The lip bite/”Ellen” interview combo gives hopeful viewers just enough to get excited about. And that excitement may be helping nudge “The Force Awakens” closer to box office history, as repeat viewings are fueling the continued success of the box office juggernaut.

But even if these hopeful Poe/Finn ‘shippers aren’t just imagining the interaction, will the “Star Wars” brain trust do right and follow through? Or is this a big screen case of queer baiting?

While in the past coded relationships between same sex characters have sometimes been welcomed by LGBT+ audiences in the past, when they were left with the option of something being better than the usual nothing, it’s a brave new world. It’s become a useful market ploy for TV shows to tease LGBT+ audiences with the hope of on screen representation, often alluded to through subtext or longing glances. But the promise is often unfulfilled, and frequently characters will even back away with a quick “no homo” joke to make sure that hetero-supremacy is upheld.

LGBT+ audiences have started speaking out, demanding that studios quit cashing in on their love and give real on screen representations. Backlash over queer baiting is public and loud.

Until we get some more evidence, Dameron’s sexuality is in flux. This saga is still being written, and that means there is still room for Poe to fly into Finn’s heart, or for the “Star Wars” brain trust to write him a whole new love interest — or just drop it all together.

LGBT+ representation in “Star Wars” would be a huge victory for the continued fight for freedom and acceptance that still faces so many people. LGBT+ teens still have a much higher rate of suicide and depression. A gay character in the biggest franchise in the universe, one linked to so many childhoods and formative to what kids think of as right and wrong, wouldn’t quite be the same as blowing up a Death Star, but it would be close.

A gay Poe Dameron could save lives in this galaxy.

“Star Wars” has always supposedly been about the fight for freedom. Here’s hoping the Resistance’s best pilot will make that fight real, and bring even more representation to a galaxy far far away.