Trump and Cruz are pandering to the base by getting more blatant with the racism, a sign for what's to come in 2016 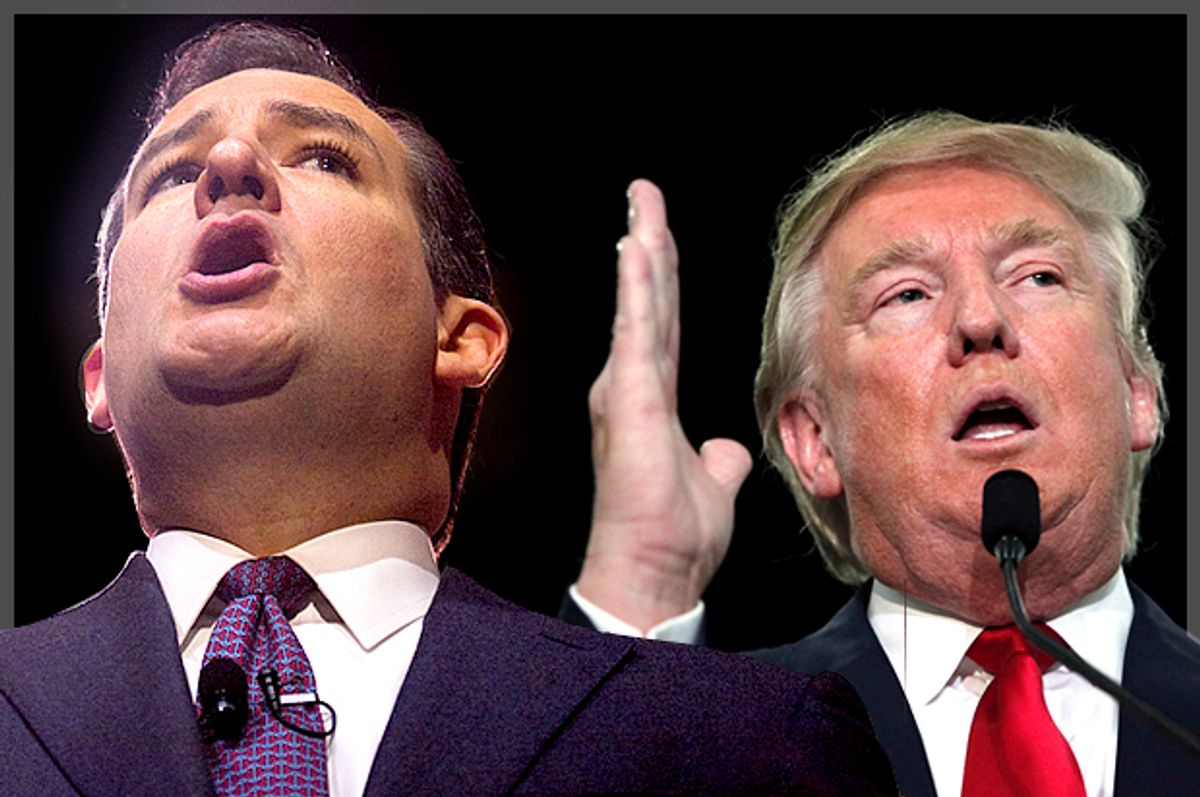 For a few brief minutes Tuesday night, between watching "Supergirl" on DVR and settling in to play video games, my TV was left on CNN, albeit on mute because there is only so much even a member of the voracious tribe of liberal media sorts can take. So you can imagine my delight when I looked up from my phone and saw this image on my TV. The talking heads were a-talking, but, in a moment that really summarizes Republican primary politics, circa 2016, hearing what they were actually saying seemed extraneous.

This, after all, is not a complicated story. Ted Cruz is catching up to Donald Trump in the polls and runs a very strong chance of beating Trump, who only seemed to realize last month that running for president requires more than shooting your mouth off on Twitter. And so Trump, in his desperation, is returning to a strategy that has served him well since announcing his then-a-joke-but-now-disturbingly-real candidacy last summer: Naked racism.

Bookies start taking bets now on how many days it is before Trump starts noting, in public, that we've never elected a president with the letter "Z" in his last name before.

There's an elaborate rationale for why questioning Ted Cruz's citizenship is not racist, involving his birth in Canada to a father who is an immigrant. (As with Barack Obama, birthers do not appear to believe women have a meaningful American citizenship they can bestow upon their children.) But at this late date, is there a person standing who actually thinks that birther conspiracy theories are anything but a comically convoluted way to express skepticism that any non-white person can ever legitimately be an American?

Do not forget, after all, that many birthers believe that Malcolm X, who was born in Nebraska, is Obama's biological father.

This isn't Trump's first toe dip into trying to peel votes off Ted Cruz by reminding voters that Cruz is Hispanic. Trump has also been questioning whether Cruz is really an evangelical Christian while making a play for that lily white evangelical Iowa Republican voter base.

"To the best of my knowledge, not too many evangelicals come out of Cuba," Trump has added to his stump speech.

On its surface, it's a weird thing to go after, and not just because of the overwhelming evidence that Cruz, whose father is the living embodiment of a wackaloon snake handling Bible thumper, is a true believer. It's also because Trump himself is most certainly not an evangelical. He claims membership in a mainline Presbyterian church, though it seems that he's not seen in the pews as much as you'd think for someone who claims the Bible is his favorite book.

Under the circumstances, it's safe to assume that Trump's blather about evangelical authenticity is just another form of race-baiting. "Evangelical" is just a code word for "white,:  and this is Trump playing the "not one of us" card against the Cuban guy.

Not that anyone should feel remotely sorry for Cruz, however. He's just as eager to race-bait as his main competitor for the nomination. His latest ad attacking immigrants is perhaps the most perfect example of the way that racist hysteria, in the 21st century, is delivered inevitably in defensive packaging.

The ad shows a bunch of people in business suits making a break across the border. "The politics would be very very different if a bunch of lawyers and bankers were crossing the Rio Grande," Cruz says in dramatic tones over the footage. "Or if a bunch of people with journalism degrees were coming over and driving down the wages in the press."

The ad's eagerness to deflect accusations of racism is almost comical in its overreach. All the business suited people "invaders" are white, black, or Asian. They might as well be wearing T-shirts that say "This Is Not Racist Against Hispanics," for all the subtlety employed trying to shore up this deflection strategy.

But really, there's no reason to be fooled by any of this. Without anti-Hispanic hostility undergirding this, the objections to immigration don't make any sense. If the fear is that immigration, by driving up the population, drives down wages due to competition, wouldn't legal immigration have the same effect as illegal immigration?

More importantly, if the concern here really is that there are more people than jobs, then what really doesn't make sense is Cruz's rigid anti-choice views. If "too many people" is a problem, forcing women to give birth when they don't want to really doesn't make sense. And make no mistake, Cruz is an even more avid forced birther than most of the Republican field, which is saying a lot. Not only does Cruz want to ban abortion, he classifies female-controlled contraception methods like hormonal medication or the IUD as "abortifacients", even though these methods work by preventing eggs from getting fertilized and not by terminating pregnancies.  Indeed, the only contraception form Cruz has indicated support of is condoms, a male-controlled form that so happens to have a much higher failure rate than the female-controlled forms he finds so repulsive.

Add to this that more Mexicans are actually moving back to Mexico than moving to the United States, making it literally impossible that their numbers could have any real impact, one way or another, on wages in the U.S.

Under the circumstances, it seems that the issue isn't "too many people" but too many of the "wrong" kind of people. And tossing a bunch of non-Hispanic actors in an ad shouldn't distract people from the underlying logic in play.

It's clear that racial anxieties are reaching a major peak in conservative circles these days. The situation in Oregon, where a self-appointed militia has taken over an unoccupied federal building that exists mainly to hand out pamphlets to birders in the summer, is another demonstration of this. Whatever the ostensible reason for the takeover is, the underlying racial anxieties that are actually motivating this are pouring forth.

Ammon Bundy told the media, "The Black Lives Matter movement, they can go and protest, close freeways down and all that stuff, and they don’t get any backlash, not on the level that we’re getting."

The narrative here driving this is pretty obvious, really. The idea is that white people are an oppressed group and that the failure of the federal government to give white dudes millions of dollars of land, for free, is a violation of their rights equal to---let's face it, they think it's far beyond — killing unarmed black people or forcing black people to live under segregation.

It's only the first week of 2016, and it's clear that, for the next few months at least, the discourse is going to be dominated by a bunch of conservatives having a massive temper tantrum over the fear of declining  levels of white dominance. It's still almost a month to go before the Iowa caucuses — much less the rest of the Republican primaries — so there's good reason to fear this temper tantrum is going to get uglier before things finally get better.