You'd hardly know it from the media, but a U.S.-backed coalition is pummeling the poorest Middle Eastern country 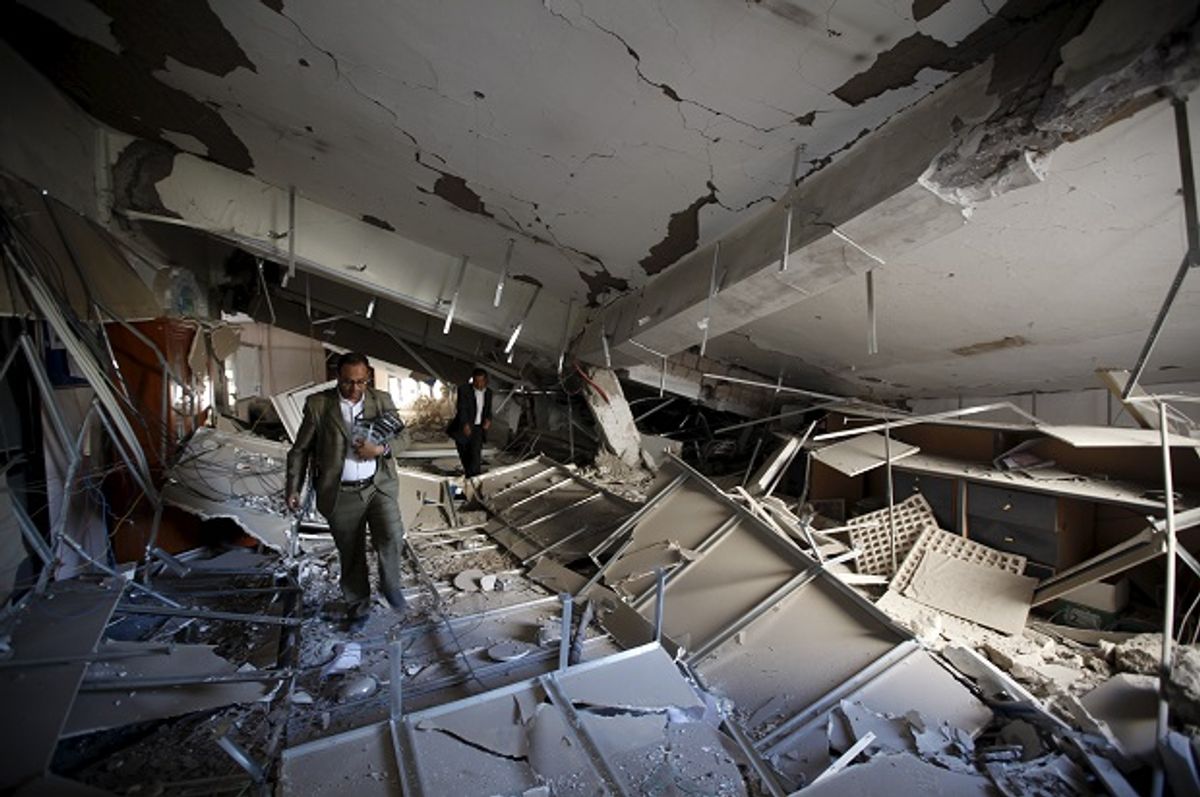 Centers for the blind can now be added to the list of civilian areas bombed by the Saudi-led coalition in Yemen — along with wedding halls, hospitals, residential neighborhoods and humanitarian aid warehouses.

The U.S.-backed coalition bombed the al-Noor Center for Care and Rehabilitation of the Blind in Yemen's capital city Sanaa on Tuesday morning, U.N. officials confirmed to VICE News. The Saudi-led coalition also hit Yemen's chamber of commerce and a wedding hall.

The coalition then bombed an Oxfam warehouse full of life-saving humanitarian aid in April.

In September, Saudi Arabia bombed a wedding in Yemen, killing 131 civilians, including 80 women.

The next month, the coalition attacked another Yemeni wedding, killing at least 47 civilians and injuring 35 more.

The coalition subsequently bombed a Doctors Without Borders hospital in Yemen in October, just weeks after the U.S. destroyed a hospital in Kunduz, Yemen.

In December, the coalition bombed a second Doctors Without Borders medical facility in Yemen.

Around 2,800 civilians have been killed in Yemen since the start of the war in March, according to the U.N. Another 5,300 have been wounded. At least 81 civilians were killed and 109 injured in Yemen in the month of December alone.

The U.N. has condemned the coalition for using widely banned cluster munitions in Yemen. These internationally banned weapons were provided to Saudi Arabia by the U.S. Kenneth Roth, executive director of Human Rights Watch, blasted the coalition for using the indiscriminate weapons, saying Saudi Arabia is "repeatedly using indiscriminate forms of warfare."

A quiet, and misleading media

Despite statements by rights groups, much of the U.S. media has been actively ignoring the ongoing war. And, even when outlets do report on it, coverage is often overtly biased.

Reuters published a piece about the bombing of the center for the blind, euphemistically titled "Yemen war intensifies amid mounting regional tension."

The first line of the piece calls the Yemeni rebels "Iran-allied Houthi forces," yet the extent to which they are backed by Iran is contested, and likely greatly exaggerated.

Award-winning investigative reporter Gareth Porter has challenged media reports of Iran ties, arguing they are not based on evidence. Porter says "false stories of Iran armed the Houthis were used to justify war in Yemen."

Only in the third line of its article does Reuters report that "the air raids hit a care center for the blind and Yemen's chamber of commerce headquarters."

Newsweek reprinted the Reuters article with the equally euphemistic headline "Yemen War Heats Back Up After Relative Lull."

The European press has devoted a little more attention to the U.K.-backed war, but even then its coverage also leaves a lot to be desired.

Britain's The Independent ran an article on Jan. 4 that calls the brutal Saudi-led, Western-backed war "Yemen's sectarian civil war," implying it is about sectarianism and religion, not empire.

Most glaring of all, The Independent did not mention once in the piece that this is a Western-backed war, in which the Saudi-led coalition is being actively armed by the U.S.

The article gave a heartwarming platform to a Yemeni artist, but, in the process, tried to humanize the war by depoliticizing it.