Conservatives decry Obama for crying instead of being more sociopathic, but really, they could learn from him 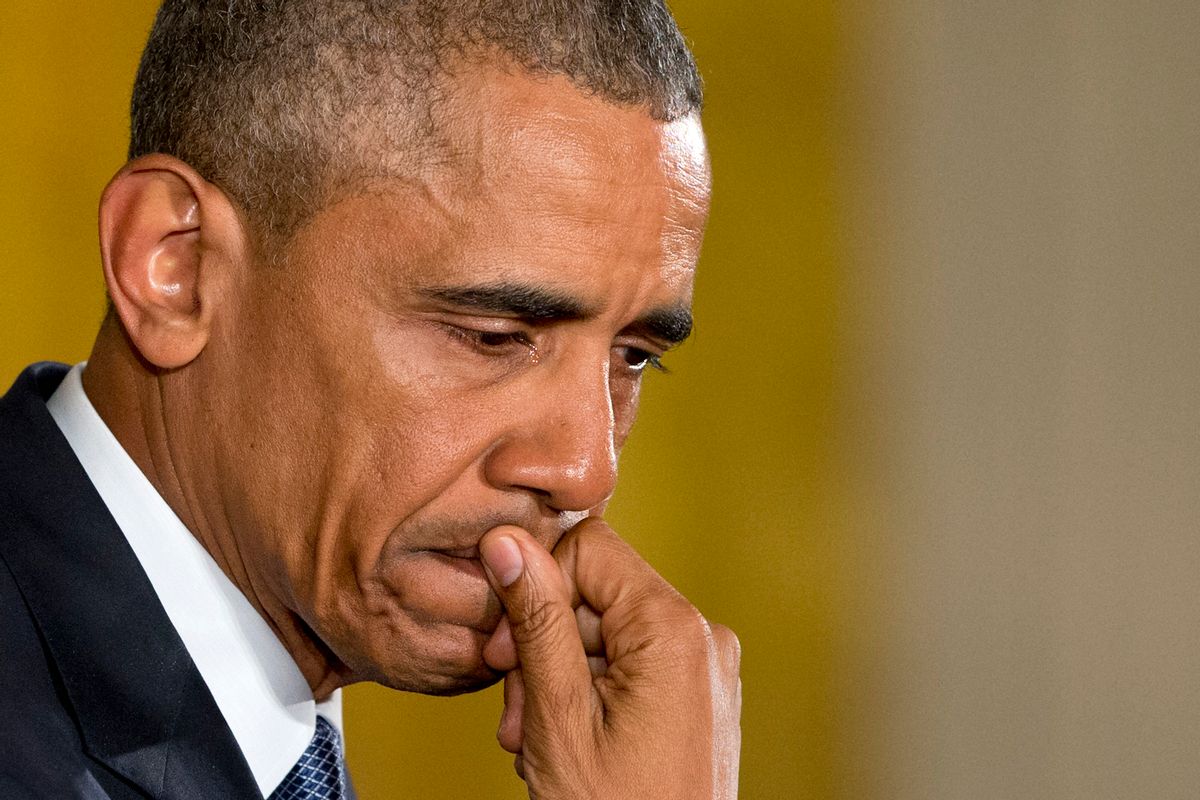 An emotional President Barack Obama pauses as he speaks about the youngest victims of the Sandy Hook shootings, Tuesday, Jan. 5, 2016, in the East Room of the White House in Washington, where he spoke about steps his administration is taking to reduce gun violence. (AP Photo/Jacquelyn Martin) (AP)
--

During Tuesday's speech on gun control, President Obama choked up and started to cry when talking about the deaths of first graders at Sandy Hook Elementary at the hands of a crazed gunman. It was a moving and relatable moment. As inured as most of us have sadly become to the loss of life from mass shooting, the idea of some monster littering the bodies of helpless children with bullets still has power. That invoking this horror would cause tears was completely understandable.

Or at least to most people, that is. For right wingers, such a reaction from a grown man was preposterous. Real men don't get upset at the bullet-ridden corpses of 6-year-olds, it was quickly determined. He's either faking it or he's not a real man.

The assumption that he must be faking it got an immediate boost from Breitbart's John Nolte, who vomited up a fully formed conspiracy theory in response.

Charles Cooke of the National Review didn't go that far, but echoed the immediate assumption that anyone crying over dead kids must be faking it.

Well, that was embarrassing. As I said, he's let his emotion get the better of him. Irrational. Dishonest. And ultimately weak. — Charles C. W. Cooke (@charlescwcooke) January 5, 2016

This line was picked up by Andrea Tantaros on Fox News. "So, I would check that podium for like a raw onion or some No More Tears,” Tantaros said. “It’s not really believable. And the award goes to… we are in awards season.”

Meghan McCain was on the show and concurred, saying it "didn’t seem horribly authentic" and calling it "bad political theater."

This reaction makes a lot more sense when you consider the important role that fake emotion, especially phony expressions of fear, plays in right wing politics. If you spent so much time dropping  crocodile tears over the deaths of fertilized eggs, pretending that ISIS is about to march on Wichita, and working yourself into a faux outrage over Hillary Clinton supposedly not loving women, you might start to think that any expression of emotion from your opponents is insincere, as well.

For those on the right who mistake acting like an asshole with strength, however, Obama's tears were indicative that he lacked the levels of sociopathy supposedly necessary to lead a country.

Eric Bolling of Fox News was all over this talking point. "Those tears, Mr. Obama, ya' think ISIS sees them as emotional strength or weakness?" he ranted.

It is true that members of ISIS, who have really acclimated themselves with bombings and beheadings, are not as ruffled by massacred 6-year-olds as some of the rest of us might be. But should ISIS really be the role model here? Is impressing ISIS with your pathological lack of empathy for your fellow human being really what we want in a president?

On a similar tip, many on the right went after the notion that only someone who is a child himself could be moved to tears by the death of children.

On a similar front, the Drudge Report tried to spin this not as an expression of grief, but of fear: Again, this feels mostly like projection. Conservatives have been pretending to be afraid of Islamic terrorism for so long that they just assume that must be what's going on here, but with mass shootings. (Which do legitimately happen much more often.)

But Obama's speech was actually the opposite of the histrionic fear-mongering that goes on every day on the right. He never suggested that Americans should cower in their homes, afraid of doing down in a hail of gunfire if they leave. What he did say is that guns kill nearly as many people as car accidents in this country, a startling statistic when you consider that nearly everyone in this country spends some of their time in cars, often every day. In other words, he offered a sober, reality-based assessment of the situation, explained that fixing the problem will be a long slog, and offered some important first steps.

It was an excellent demonstration of the fact that emotion need not be the enemy of reason. For the right, emotions like fear and grief are treated primarily as justifications for abandoning reason, from invading countries for no good reason to terminating effective sex ed because the idea of your children growing up terrifies you. But Obama demonstrated that it doesn't have to be that way. His emotion served his reasonableness. His sadness at loss of life compelled him to seek effective solutions, instead of flailing around screaming nonsense. Perhaps conservatives should learn from him, instead of mocking him.