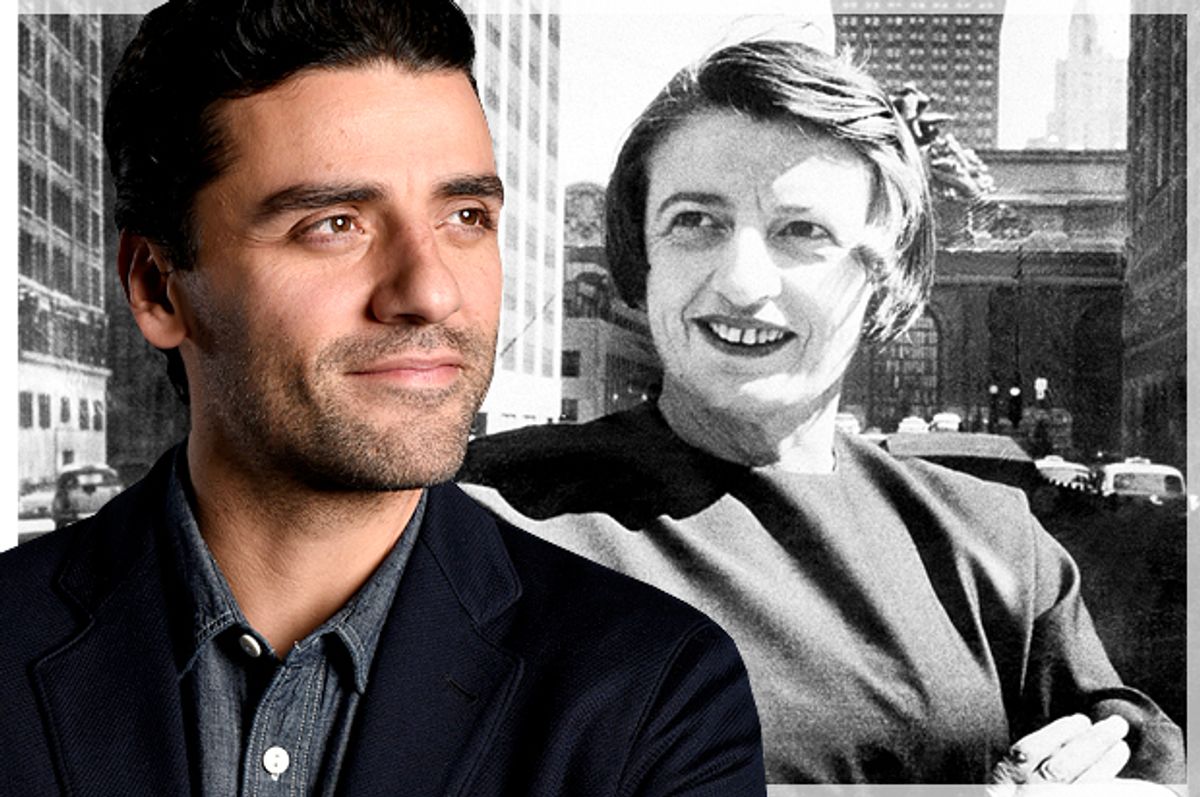 An actor, a T-shirt – what’s the big deal? But an old photo of Oscar Isaac, who plays the brooding folk musicians in “Inside Llewyn Davis” and a courageous pilot in “Star Wars: The Force Awakens,” has the Internet in an uproar. One former fan calls herself “deeply betrayed.”

Why are people – or at least, people on Tumblr – so bent out of shape about a pic from 2009 that shows Isaac sporting an "Atlas Shrugged" t-shirt? Let’s walk through this for a second.

It may be because we assume most actors are left-leaning hipsters and like all the things left-leaning hipsters approve of. A lot of them are. And there is little sign that the “Atlas Shrugged” author was in any way hip — for what it’s worth, Rand defined herself against the political left quite literally: She fled the U.S.S.R. during the Stalin years, and the heroes of her novels were noble, defiant individualists who stood up to the sheeplike masses and oppressive forces of mediocrity. Instead of environmental causes or human rights issues, Rand and her protagonists preached the virtue of selfishness. (She and George Clooney or Oprah Winfrey would probably not get along.)

Could part of the cognitive dissonance come from the fact that Isaac is Latino? In the United States far-right politics tend to belong to Caucasians, so maybe folks can’t get their heads around that. (For what it’s worth, Isaac’s father came from Cuba.) Okay, maybe this is part of it.

The shock most likely comes from the fact even those who know better project their hopes and dreams and tastes and everything else onto actors. That’s why these people can act, after all: There’s got to be something open and undefined about anyone who can impersonate other people for a living. (Perhaps Isaac-adoring Ayn Rand enthusiasts are feeling validated right now – they always knew he was on their team!)

But Isaac is not just another cool young dude caught with something that doesn’t play in hipsterville. He’s also the newest version of Ryan Gosling, Benedict Cumberbatch, and Idris Elba – what New York magazine’s The Cut calls the Internet’s boyfriend. Here goes:

Have you heard the news? We’re all in love with Oscar Isaac now. He’s filling up your Tumblr dash, blanketing your Twitter feed, and featuring in your daydreams. He is the internet’s new boyfriend.

… As with others, you can find him in the popular media of the moment. The attraction starts with The Force Awakens and grows from there, finding expression in GIFs, quotes, and photos. When real men disappoint us — in their politics, their bullshit, their basic human inconsistencies — the internet’s boyfriend is a paragon of enlightened masculinity, constructed by committee.

Imagine Elba turning out to be a really serious Billy Joel fan, say, or Cumberbatch caught sneaking out of a Maroon 5 concert, or Gosling sporting a mullet, and you get a sense of the stakes here.

The irony on this one is that there is little evidence that Isaac is political in any way, either left or right. He probably grabbed the shirt because of its retro graphics and thought he’d look cool in it. The novel came out in 1957 and has a very snazzy midcentury style.

So what happens when someone disappointed by an actual boyfriend or husband flees to an Internet crush like Isaac, and he disappoints them all over again? We seem to be moving into a new category here – a sort of Internet rebound boyfriend. There’s got to be a better phrase for this, though.

Either way: Sorry, but nothing says kryptonite to smart fan girls like “Atlas Shrugged.”