This show flips all the scripts: A male prep school student, drugged and raped at a basketball party — and what happens next 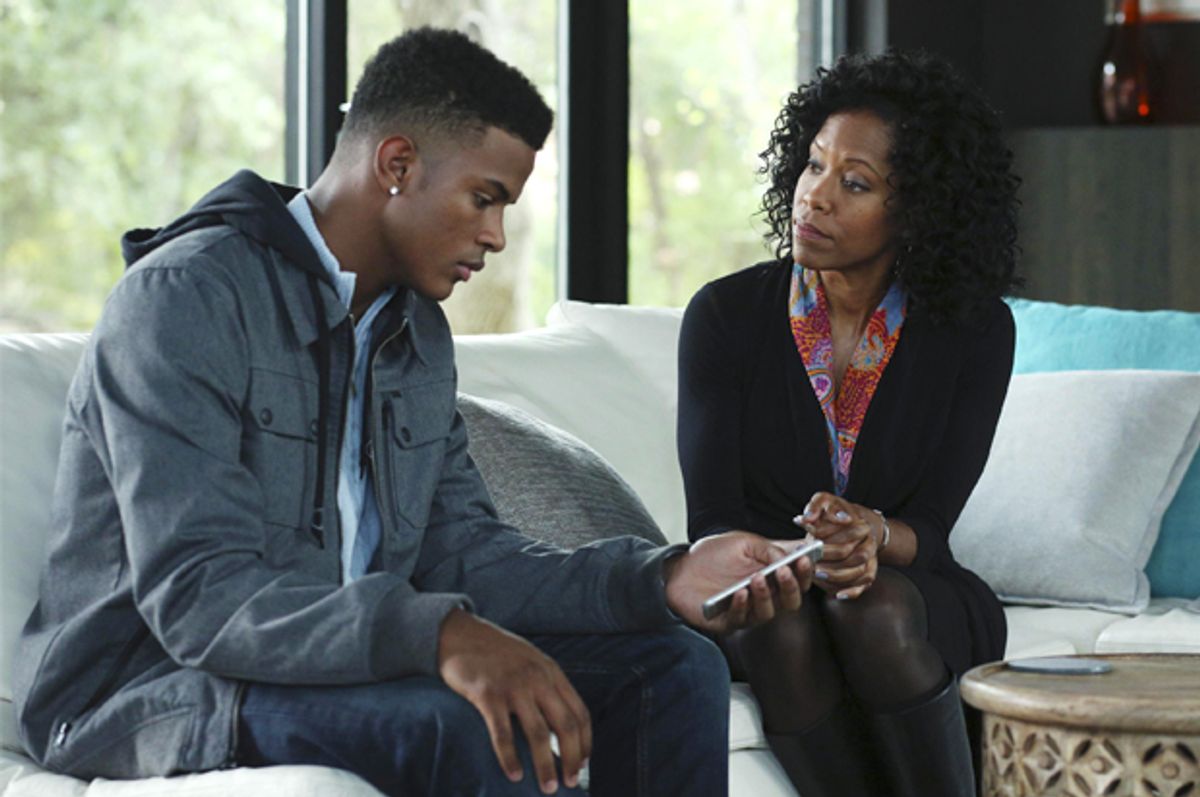 The most abstract thing to say about “American Crime,” ABC’s anthology miniseries returning for a second installment tonight, is that the direction is like nothing else on broadcast television. The opening moments of tonight’s premiere is just a scene of several teenagers either participating in or observing basketball practice, but it’s inexplicably, lyrically tense, as the camera first gets close to the sweating basketball players, and then hangs back to steal glances at the kids on the bleachers. Creator John Ridley—who produced “12 Years a Slave”—creates a sense of unchecked hormones, the pressure to succeed, and a sense of foreboding from just the visual landscape of the scene. As the season unfolded—ABC sent out the first four episodes to critics—I found myself returning to the scene, trying to dissect its ambiguous affect now that the show had doled out more information. “American Crime” offers up that scene the way that “Breaking Bad’s" second season offered up the floating teddy bear in the pool—not a flash-forward, but a sign of things to come, and one that gains more meaning as the weeks wear on.

Very little else of the show is abstract. “American Crime’s" second season is immediately more successful than its first, partly for this reason. It carries a stronger sense of artful engagement with the viewer, through both direction and tone; where the first season of “American Crime” unfolded a very grim crime of murder and brutal violence, the second season is about a crime where so far, at least, everyone involved is still alive. And maybe because most viewers who have seen “American Crime” will have already considered season one’s themes of police discrimination, racial profiling and cycles of addiction in the now-classic HBO series “The Wire,” season two offers a newer, different topic: campus rape. And though the scandals at both Steubenville and St. Paul’s are drawn from in the show’s narrative, there is a significant, major difference: The victim is a teenage boy.

This detail is immediately polarizing and destabilizing, both within and without the show. It clashes with a deeply held and long-running set of beliefs about what it means to be a man, or to be a teenage boy; it inherently challenges the assumptions that tend to be held around rape, especially among young people in high school. And because it’s exploring victimhood of various shades, it skews a little preachy—but not, necessarily, in a bad way. If “American Crime” has any one lesson, it is about how densely complex the world we live in is, when you bring in the threads of bureaucracies, institutions, families, and politics—and how difficult it is, in that web, to make ideas stick to the events of the everyday. There is not a frame of “American Crime” that is not conscious of race, class, gender or sexuality; the series is peppered with moments that exist only to illustrate the comparative weight of different identity markers.

That sounds very heavy. And in the first season—especially when coupled with the murder investigation being portrayed—“American Crime” was a depressing show to watch. In this season, it’s less depressing than engaging, because on top of there being this genuinely gripping mystery to unravel, there’s at least one teenage boy worth saving, too. In a show with a lot of acting heavyweights, Connor Jessup, who plays the rape victim Taylor, is “American Crime’s" emotional center, managing to elicit a lot of empathy without saying much at all. We first meet him speaking to his guidance counselor, and the way Ridley frames him, his counselor’s words might as well be the honking sound from “Peanuts” cartoons—Taylor isn’t listening. He’s elsewhere, drifting, and these big ideas about college and the future mean nothing to him.

The trouble starts, sort of, when Taylor is suspended from school. Pictures of him drunk at a basketball party are circulating on the phones and Facebook profiles of his fellow students at Leyland High, a private high school in Indiana. Leyland invokes their code of conduct. But Taylor, distraught, confesses to his mother, Anne (Lili Taylor), that he was drugged, and worse, that someone did something to him. It’s enough to send Anne into her own tailspin, as she tries to get someone to care about the fact that her son was victimized. She immediately runs into the school’s dual bureaucracies of moneyed administration and star sports team. Anne’s a single mother working as the manager of a restaurant; Taylor is at Leyland on financial aid and has never managed to fit in. Much of the impetus of the first episodes is on how Anne gets anyone to care about Taylor’s situation—including Taylor himself, who just wants it to go away—in the face of these institutional obstacles.

Lili Taylor is one of several actors “American Crime” brings back for the second installment, reimagined as different characters (à la “American Horror Story”). In the first four episodes, it’s the female actors that stand out: Anne, the mother of the raped boy, is torn between trying to do the right thing and feeling like her life is spinning out of control. Regina King (who won an Emmy for her role in the show’s first season) plays a high-achieving power mom to her basketball-playing son, one acutely aware of racial dynamics around black teen boys and very keen to not reproduce them for her child. And Felicity Huffman plays Leyland’s ambitious principal in the middle of a multimillion-dollar capital campaign—not quite as blatantly intolerant as her first-season character, but carrying a seething edge of winning at all costs, as her school is embroiled in scandal.

It’s still not exactly an easy watch, but it’s a far more engrossing one than in season one. Leyland is an immediately recognizable institution, and the relationship between the school and its sports team looks a bit like “Friday Night Lights” through a darker lens. Ridley’s camerawork observes the nail polish and lip gloss of teenage girls making eyes at boys, and the spheres of difference between a kid on financial aid and a kid with his own credit card. And from a purely narrative perspective, the twists of the story are remarkable. To be sure, it’s a bit convenient, introducing themes of teenage queer sexuality, shades of consent, underage drinking and class issues all in one unaccounted-for hour at a party—but given the real-life stories of campus rape cases on high schools and colleges throughout the country, it’s hardly that contrived.

Above all, it feels relevant, in a meditative way that belies the immediacy of the material. Rape and consent have become endlessly discussed topics, but are far from “solved”; and the numerous complications of 400-odd students experiencing puberty simultaneously are essentially universal, no matter the era or the circumstances. Add to that the confusing and ever-shifting notion of whatever American masculinity is supposed to be—somewhere between high school locker rooms, texted nudes of other men’s girlfriends, and driving really fast in cars—and the second season of “American Crime” is already starting off on an engaging, mysterious and tragic note.