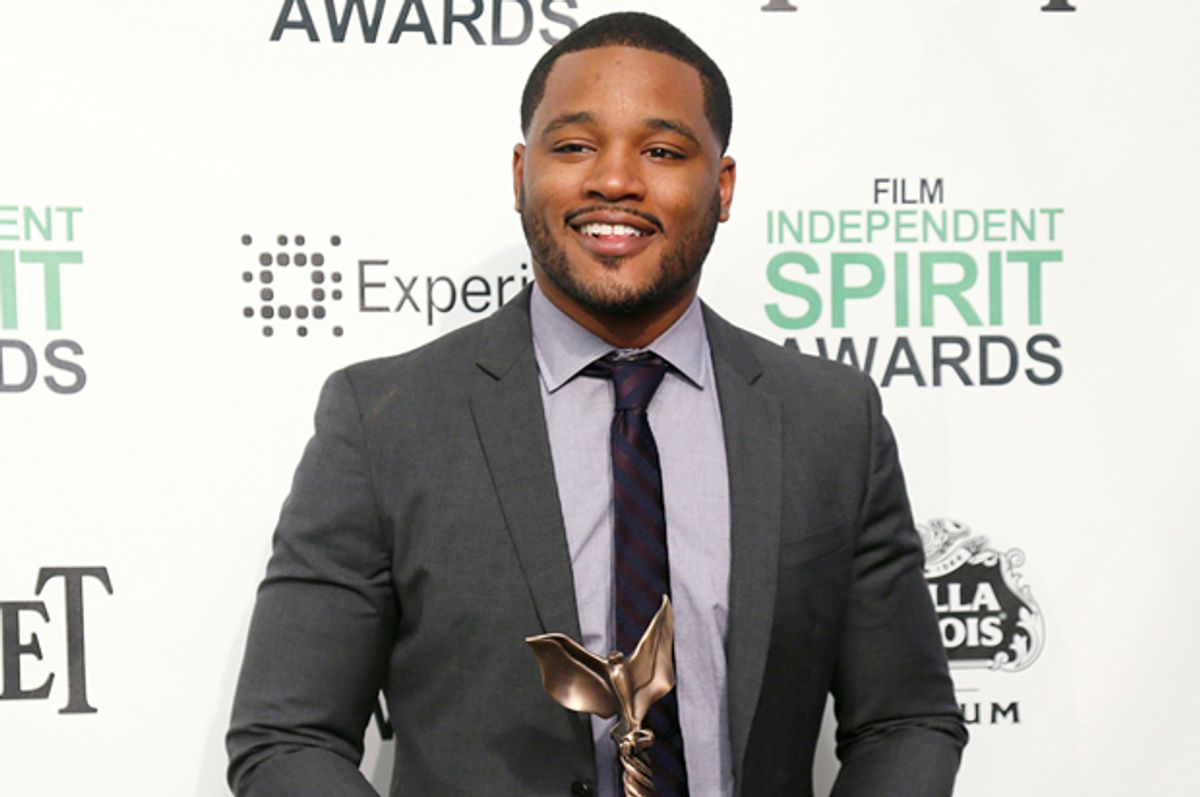 The next time you see a little girl playing with her dolls, don't tell her she's going to make a good mommy or a good big sister or a wonderful thrower of tea parties. Tell her that she could be the next great film or TV director, because that's all directing is — dolls and feelings.

I wish I could take credit for that gem, but “Transparent” creator Jill Soloway said it in this powerfully good read at The New Yorker. In a conversation with Ariel Levy, the Golden Globe winner verbally dismantled the patriarchal structure masquerading as the TV and film industry:

“Women, Soloway said, are naturally suited to being directors: ‘We all know how to do it. We fucking grew up doing it! It’s dolls. How did men make us think we weren’t good at this? It’s dolls and feelings. And women are fighting to become directors? What the fuck happened?’”

If you're like me, you read that quote and you wanted to see it go viral, because it makes so much sense it’s infuriating. You wanted to log on to Facebook and see everyone you know posting it with a one-word comment: "Yes." (Or "Yasss.") But that’s not exactly what happened. And although many people read and shared that interview, Soloway's quote didn't seem to inspire new headlines in other magazines and responses from Twitter like the ones we're seeing now that Ryan Coogler made a very similar statement about female directors in a recent Variety interview.

Like most others, I was excited to see that the "Creed" director, recently announced as the director of Marvel's upcoming "Black Panther" movie, was so bold as to say this aloud: “I really feel like, you know—this is off the record—I feel like women are better filmmakers than men.”

At the suggestion of writer Kristopher Tapley, Coogler decided to go ahead and put it on record, and further expounded upon his feelings about why women are better equipped, emotionally and otherwise, to bring a stories to film. The headlines that followed highlighted this quote above all the others in the interview. That's exciting. And that's important. And Ryan Coogler is currently one of my favorite directors — I believe that he meant what he said. But I also know that he's not the first to say it, and it’s the round of applause from the internet over this quote (and not what Coogler himself said) that should be interrogated. Because our tendency to listen to one man, when hundreds of women—or even one equally qualified woman—have said the same thing (let alone when they say the opposite thing) is a dangerous practice that affects nearly every facet of our society.

Coogler's quote is really just another plea to let female directors in the room. The world of filmmaking—as wonderful as it already is—will be infinitely better with more women telling stories. Yes, these are facts. But because men and women are still programmed to take the word of a man (even on a woman's issue, or especially on a woman’s issue) over the word of a woman, it seems like we are going to be waiting for many more men like Coogler to speak out and say—on the record—that they want a film industry that includes more women auteurs.

The myth that we continue to embrace here is that a man has no stakes in supporting a woman, so his words are somehow more pure. Consider what might have happened if a female comic, instead of Hannibal Buress, made that same joke about Bill Cosby being a rapist in 2014. The response would have been very different, or even nonexistent. It would have sounded, to many ears, like another woman standing by her complaining little girlfriends (which is still, for many, the basic definition of feminism). But when Buress says something, well — it must be true or at least worth investigating, because no man would ever speak out for women merely for the sake of doing so. He stands to gain nothing—as if women speaking out for women are more likely to be doing so to get ahead, or to secure some privilege for themselves. Many have already noted how we (we, as in the media, and the public) didn't even take the word of all those women together—but needed the casual statement of a man who seemingly stood to gain nothing by lying (again, as if women, on the other hand, are more likely to lie in an attempt to spread rumors about great men so that they might... take over the world?).

Similarly, Coogler saying that women make better directors than men seems like it would be counterproductive for Coogler, a man, who surely wouldn't suggest a studio pass him over for a coveted project just because of his gender without a very good reason. When Soloway makes a similar suggestion—and she’s cosigned by the many other women around her, demanding room—it sounds opportunist to ears that have been tuned to hear women's demands in that way. The reality is that Coogler stands to lose nothing at all by saying what he’s said—hell, if anything, he gains the admiration of women the world over (myself included).

But the next question for these men who believe women directors belong in the film world is whether or not they’d take a real risk to stand behind this belief. Some of the biggest male names in the comic book world quickly banded together and organized a boycott of the prestigious Grand Prix d’Angoulême when no female comic creators were nominated. Would any of our acclaimed male directors decline their Oscar nominations if the director category proves to be another boys-only affair (as it was last year)? Bradley Cooper, who pledged to work with the women he co-stars with in films to close the pay gap, might be the one example we have of such a move, but even his promise isn’t likely to cost him anything. And again, one has to ask, isn’t he simply doing the right thing here? How much credit must we give another privileged man for speaking up for the women around him?

It all comes down to whose words hold value in our society. Even when a group of people is saying the same thing, who do we choose to listen to? Who gets the clout and the privilege of cast public acknowledgement and exaltation?

When we celebrate men for supporting women, it’s not unlike celebrating white people for speaking out against racism. If a black actor took a selfie with the book “The New Jim Crow,” and urged his followers to read it, he might be met with some applause, but nothing like the thunderous, viral reception of which Matt McGorry was on the receiving end recently. Is it wonderful that he's reading Michelle Alexander’s text and encouraging his fans to do the same? Absolutely. Does that make him a better white male celebrity than, say, Stephen Amell? Yes, I think so. But isn't it also troubling how much attention Matt McGorry gets for learning about how much attention he gets as a white man, and how that privilege is on the other end of a spectrum where black children’s killers go unpunished? As a white man of privilege (and an actor who starred on "Orange is the New Black"), Matt McGorry is exactly the kind of person who should be reading “The New Jim Crow.” And yet, we can't help but celebrate his doing so, because we've been taught to expect less—in the same way that we can’t help but be grateful for Hannibal Buress and Ryan Coogler.

We've been taught to expect so little from men and from male directors, that when one of them speaks out and states the obvious, echoing so many other women the world over, we want to scream the news from the mountaintops. It's another way of saying, "See? We're not crazy. It's not just Jill Soloway and Gina Prince-Bythewood demanding that women direct. It's also a man—and a man who just made the latest “Rocky” movie, no less!" This is a fair reaction, but it's also the result of a dangerous message we are continuously sent about the worth of women in this and so many other industries—that such worth is difficult to measure, without the weight of a man's voice behind it.

But there’s also another way of looking at the choice words of these two directors, who I admit I’ve singled out as a huge fan of both their works (and, interestingly enough, Coogler mentions Soloway in the Variety piece, as one of his reasons for wanting to explore TV directing). Although their overall message is the same, it has to be said that Coogler and Soloway deliver it very differently. Soloway doesn’t merely say that women should be directing—she goes so far as to feminize (insomuch as the feminine is as performative as the masculine) the act of filmmaking. She implies that filmmaking is for women, perhaps even more than it is for men.

This is even more bold than simply suggesting that women should be embraced, because they are great filmmakers too. It almost makes the world of filmmaking a stolen domain that women have to reclaim; whether they ever visibly dominated it or not is irrelevant. But if we accept such an interpretation, and manage to convince a few women that, not only do they belong in the room, but the room was rightfully theirs to begin with, we’ll just be asking for trouble. Better to stick with the idea that this industry, too, is a man’s world, but women have some great stuff to contribute to it, and should be given the chance to do so. Right?