Penn's column for Variety mansplains theater, slams a whole generation of actors and goes deep on his depression 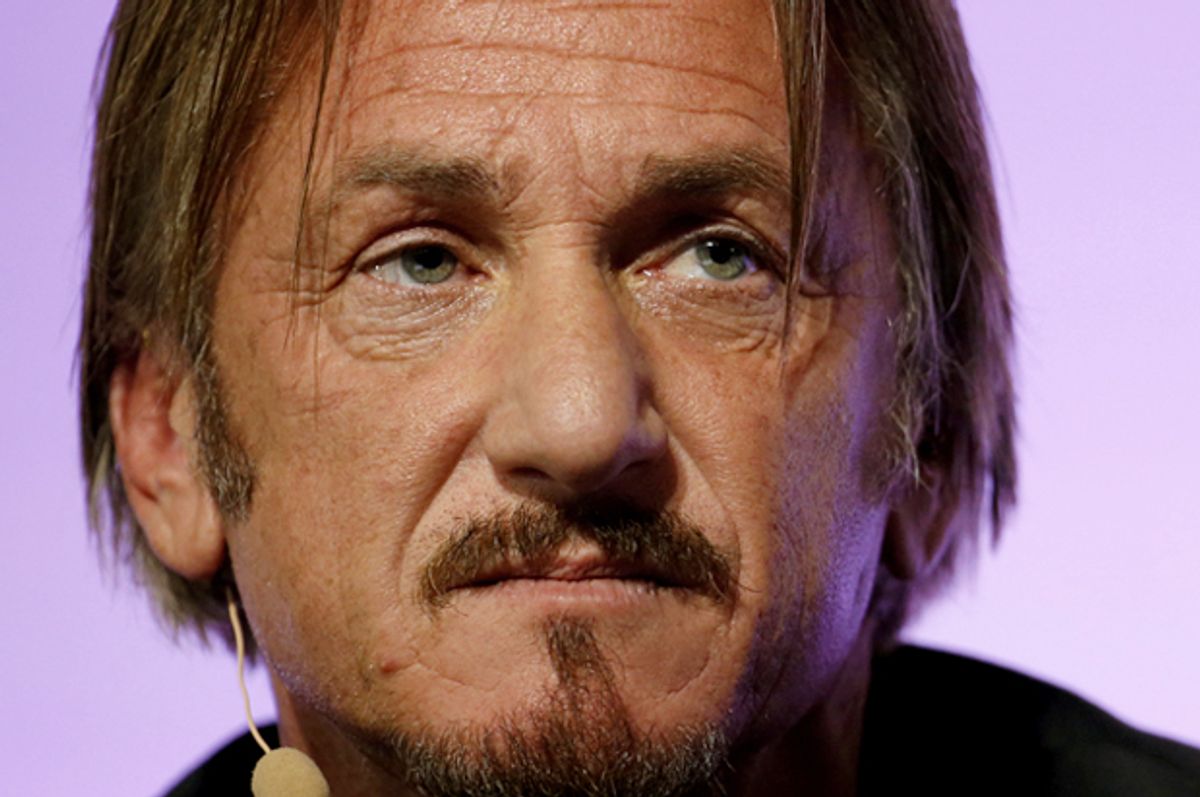 It’s no secret that Sean Penn is an overassertive, difficult guy. He’s attacked photographers, allegedly hit his then-wife Madonna (though she has since denied it) and become the one of most famous scenery chewers in cinematic history. He blew up at the Academy Awards years ago. So he’s generally unpredictable even by the standards of Hollywood actors.

But the latest from Penn is truly strange. It’s a kind of mansplaining lecture on the history of theater, crossed with a deeply felt homage to David Foster Wallace, and an endorsement of Jason Segel’s portrayal of DFW in “The End of the Tour” that is so over-the-top it reads like a paid ad.

Some of it’s borderline incomprehensible, like its opening paragraph:

From 500 B.C. to 300 B.C., actors of the Greek theatre wore the masks of comedy and tragedy–those that had come to be the representative symbols of the craft of acting, and the expression of the actor. Somewhere along the line, acting found its way more into a profession than expression. Today, those masks represent a union, or more accurately, a guild of actors that work to protect business with little or no focus on the protection of creative expression.

Well, this is all true, but, ah, where was the editor today? Was Variety so excited to have a column by an actor of his caliber they were afraid to touch it? Did they promise him they wouldn’t edit it at all?

Penn speaks about his own struggles with depression as well as his integrity as an actor: His insistence on his own uprightness, at the expense of "kids today" who are mere paycheck players, goes on a bit too long, but Penn really can be a devastating performer at times, so maybe he’s earned the right to rant and rave a bit.

One day, while flying to the Middle East, Penn turned on the DFW biopic “The End of the Tour,” despite some skepticism as to whether Segel could pull it off.

I pressed “play.” I sat for 106 minutes. For maybe ten of those minutes, was I not weeping. It wasn’t just a wonderful film. It wasn’t just the writer’s intelligent selection from Foster Wallace’s public works to the creation of dialogue and behavior that so well had matched my own experience of Wallace. It wasn’t just the assured direction, or the generous performance of his co-lead. What it was, most significantly, was the realization that I was seeing a real actor, a real person, in Jason Segel. From a generation so dominated by human advertisements, calling themselves human actors. I was seeing in Jason Segel not the selling of a film, but the making of one–the pure, intelligent, sad, funny, human embodiment of the origin of those Greek masks.

This is a lovely tribute from one actor to another. Penn clearly means it, man. But it’s also way too much. Segel was quite good as DFW and drew deserved acclaim: He doesn’t just dust off his “Freaks and Geeks” or “Sex Tape” mojo for this: He conveys an anxious novelist who both enjoyed engaging people but resisted being the center of attention.

But go check out Wallace’s interviews and speeches, and you’ll see the distance between the real DFW and Segel’s performance, which is defined by a kind of squinty nerdiness. I saw Wallace speak in Los Angeles in the 2000s; he was mostly charming, open, and funny, seemingly at ease with the crowd. But neither his mannerisms nor his presence had much in common with the way Segel portrays him.

An actor’s performance is an interpretation and not an impersonation. And who was more complex and multi-layered than David Foster Wallace? Segel, I’ll concede, probably hit a certain kind of Wallace performance exactly right.

But Penn needs a sense of proportion. And an editor. Put down the Greek mask, dude. Actors can praise each other without hyperventilating. The guy who played Jeff Spicoli clearly needs to recover his cool.