The GOP's reign of gubernatorial terror: Here are the small-government zealots who made their states considerably worse

Michigan Governor Rick Snyder has been embroiled in a scandal that could ruin him. He's not alone. 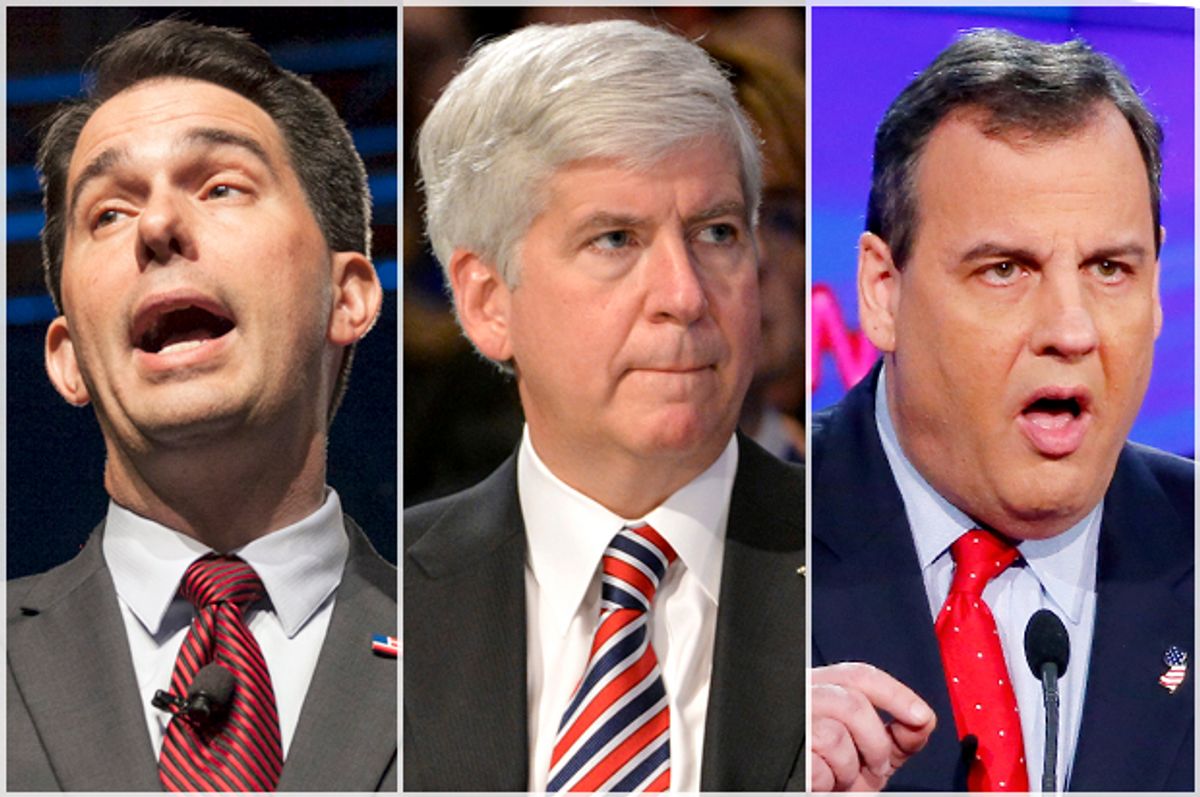 If you caught any of Michigan Gov. Rick Snyder’s press briefing about the Flint water crisis on Thursday morning, you saw a man who looked as if his brain had not yet caught up to his increasingly dire situation. Snyder still appeared to still be processing the fact that his administration’s decision to enact a cost-saving measure forcing the city to use the hideously polluted Flint River as its sole source of drinking water resulted in high levels of toxic lead poisoning of the residents. Oops.

The next time some idiot wearing a Donald Trump t-shirt and a sneer tells you that we need leaders who will run the government more like a business, kindly direct their attention to Snyder. A business executive and CPA with no prior experience serving in government, Snyder was elected in the wave election of 2010 that swept Tea Party conservatives into office at the state and federal level. He immediately set about trying to run the state like it was a division of Gateway, the computer company where he was an executive during the 1990s. He crushed unions and made Michigan a right-to-work state, cutting services, and replacing the business tax with a flat tax while eliminating tax breaks on pensions, thus putting more of the state’s tax burden on the poor and working classes.

The result? Michigan now ranks a whopping 36th in per capita income and just spent a year and a half poisoning 100,000 people with water so polluted, a local General Motors engine plant stopped using it because it corroded the factory’s machinery.

Snyder is not the only Republican governor swept into power during the Tea Party wave of 2009-10 who used his state as a lab experiment for the type of conservative governance the GOP has been pushing for decades – lower regulations, lower taxes, slashing government services, and generally screwing over everyone not in their socio-economic class through austerity budgets and a boneheaded, stubborn refusal to adjust their policies in reaction to changing events. How is that working out for some of the other governors? You're probably already well acquainted with the disasters of the Scott Walker and Chris Christie administrations. But let's review some of the others.

Rick Scott – Florida’s answer to the question, “What would happen if you put a giggling, amoral vampire with a checkered career as a business executive and venture capitalist in charge of your state?” The result has been a man who generally looks like he is in way, way over his shiny, clean-shaven head. He has flip-flopped on accepting Obamacare’s Medicaid expansion enough times that Floridians could probably set their watches by it. Job growth has been not bad, but still well below what Scott promised, and many of the jobs created on his watch have been low-paying. The state now ranks 29th in per capita income, which is several slots shy of mediocre.

Scott’s crowning achievement might be his continued denial of climate change being a problem that humans might be able to address, even while rising oceans are already beginning to drown parts of the state. I hope Floridians are growing gills. They might need ‘em by the time Scott’s second term is up.

Oh, and he hearts Donald Trump. Ladies and gentlemen, your next Secretary of Health and Human Services, Rick Scott.

Sam Brownback – What can I say about the Kansas governor’s continuing efforts to turn his state into a post-apocalyptic wasteland that I haven’t already said? Um, the Royals won a World Series and re-signed Alex Gordon. That’s something, I guess. Oh wait, Brownback even screwed up the point he was trying to make about that drama.

Paul LePage – Lord, where to even begin with Maine’s embodiment of every terrible stereotype of a slow-witted backwoods resident rocking in a chair on the porch of a country store and warning the protagonists of every Stephen King novel to leave town before nightfall. We could talk about his playing footsie with members of the Sovereign Citizens Movement, his referring to the IRS as “the new Gestapo” over its role in enforcing parts of Obamacare, his attempt to erase the history of the labor movement from the offices of the state’s Department of Labor, his current policy of vetoing every single bill passed by the Democratic-controlled state legislature, regardless of merit, to protest the legislators’ refusal to abolish Maine’s income tax, or his suggestion that the state should loosen up the child-labor laws so twelve-year-olds can get jobs.

All of that, and Maine still ranked 47th in GDP growth in 2014. But at least LePage isn’t likely to get impeached.

Mary Fallin – One could say many, many things about the tenure of Oklahoma’s current governor. But I think any conversation about her begins and ends with her unceasing pursuit of making sure her state’s prisoners get put to death regardless of whether the execution method violates the Eighth Amendment. Only a conservative or a sociopath – but I repeat myself – could be so determined to carry out a death sentence that she would essentially approve experimenting with untested execution drugs on the condemned prisoner. Even if Oklahoma was the most economically booming state in all America (it’s not), even if all its residents were the picture of health thanks to robust insurance coverage and care (they’re not), it would not wash away the stain of Fallin’s unnecessary bloodlust.

Conservatives love to brag about how many statehouses and governor’s mansions they have captured during the Obama Era. But we could go on and on about the results (the havoc of Scott Walker’s rule in Wisconsin and Chris Christie’s in New Jersey could each take up hundreds of pages) and the bottom line would still be the same. These hard-right governors have been embarrassments and disasters for their states. And yet their constituents keep re-electing them. Forget the presidential election for a minute – liberals need to figure out how to do better at the state level. The sooner the better.