Four superior excuses Gov. LePage could have given for his racist rant about white girls and drug dealers

Gov. LePage had an unbelievable but boring excuse for his racist comments. Here are four better options 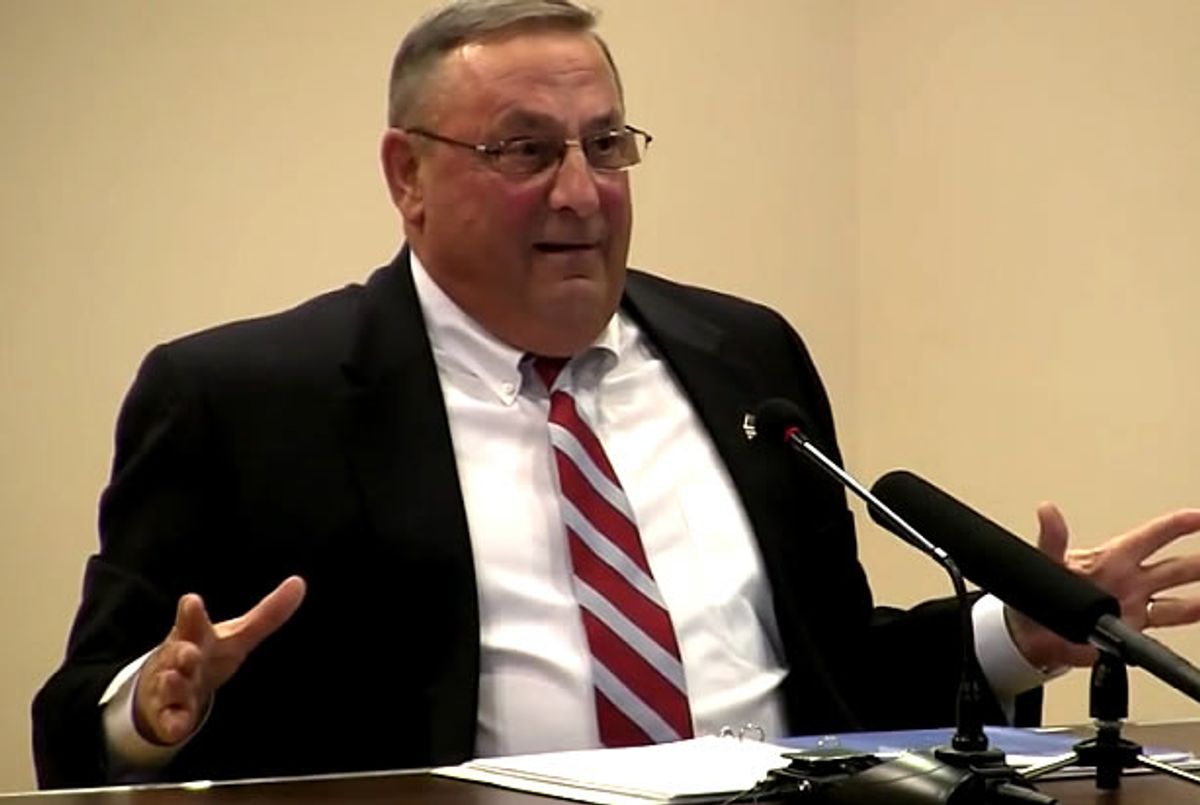 Maine Gov. Paul LePage's recent behavior fits a ritual that has become so familiar to Americans we can predict every beat: Public figure says something racist, people get outraged, public figure offers a semi-apology while denying, despite all evidence to the contrary, to have meant anything racist by the racist thing they said. (He's not the only politician who has gone through this cycle just this week.)

But while we knew the semi-apology/excuse was coming, it was exciting to wonder how he was going to wriggle out of saying that New York sends its heroin dealers to Maine where they "impregnate a young white girl before they leave."

As Salon's Michael Garofalo reports, LePage finally came back with, "Instead of saying ‘Maine women’ I said ‘white women’ and I’m not going to apologize to the Maine women for that," which he justified by claiming that 95% of Maine women are white. He also angrily noted that he did not indicate the race of said impregnators.

Overall, a disappointing performance. Look, we all realize that, after a bone-headed comment like that, what you actually say to defend yourself isn't going to matter. His defenders, who almost surely are obsessed with the same racialized fantasies as LePage, will angrily deny that he's racist, even if he offered his excuses while wearing blackface. The rest of us will continue to believe that LePage is exactly the slimy racist he pretends not to be.

Under the circumstances, why not just get freaky with it? Be creative, have a little fun. We all know you're bullshitting, so make that bullshit count.

With that in mind, I came up with a few alternatives that would have accomplished the same goal - defensiveness from supporters, get-a-load-of-this-guy reactions from everyone else — but at least would have been more entertaining for everyone.

1. "I wasn't trying to imply that heroin dealers target white girls for impregnation. No, I was referring to the well-known scientific fact that only white women's eggs are capable of being fertilized by the sperm of drug dealers. True story. I learned it from my friend, Todd Akin, who said some doctor told him. What? It's not true. Well, at least you can't say it's racist, because I was saying it about white women."

2. "Oh, you misheard me. You thought I said 'white' girls, but I actually said 'wight' girls. As in W-I-G-H-T. Yeah, you may not know this, because Maine is so out of the way, but we have a real zombie problem here. George R.R. Martin got his idea for ice zombies from Stephen King during a visit, if you know what I mean. Either way, you can see why it might be a problem to have out of town drug dealers impregnating the local zombies. The infant undead are a big enough problem to deal with, but if their dad is a drug dealer? Problems upon problems with that scenario."

3. "No, no, no, the transcript was garbled. I didn't say 'white' girls. I said height girls, as in very tall young women. Why is it a problem for drug dealers to impregnate tall women? Well, you don't want those guys having big babies. Those kids could grow up and go into work being muscle for dad. Better for the babies of drug dealers to be smaller kids, that's all I meant."

4. "You guys thought I was talking about white girls, generally? Hey, go back and look at the transcript. I clearly said 'a young white girl.' A girl, as in one girl. Yeah, we have this one girl in Maine, don't know what her deal is, but every time a drug dealer comes to town, she has to get pregnant by the guy. It's like some weird sex thing. You thought foot fetishists were weird, but then you hear about something like that. Anyway, yeah, couldn't use her name, so I just mentioned her race, you know, as a descriptor. She's also blonde and 5-foot-4. I'd say more, but my lawyers say that I probably shouldn't make it too easy to figure out who she is. But you know, the short blonde who is always pregnant and chasing after drug dealers. Maybe in New York, you have a bunch of those, but Maine's a small place, so we only have the one."

See? Four excuses, all equal in plausibility to whatever LePage was trying to say to defend himself, but all way more fun. Life is too short to half-ass these things, folks. Even for self-important blowhard racists.