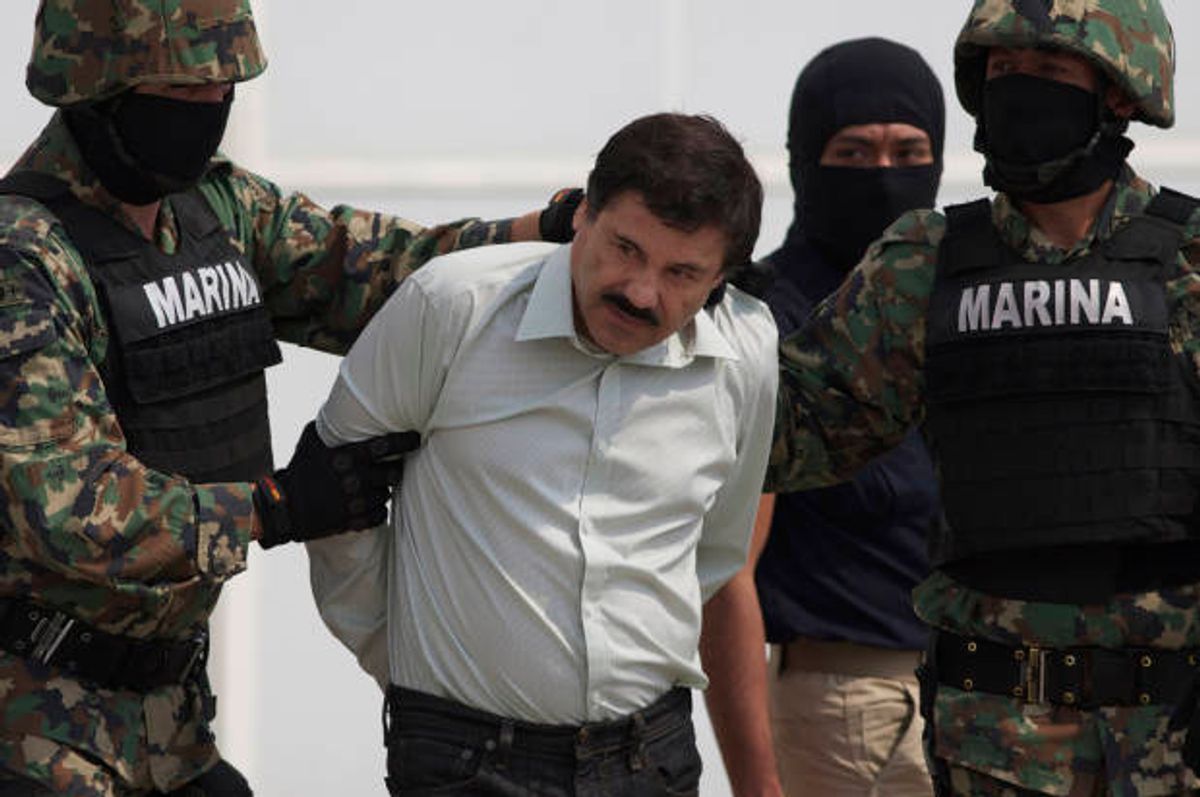 “Sean Penn interview led authorities to El Chapo” might already be the strangest headline of 2016 — but the story gets even stranger from there. This entire caper reads like a chapter from a lost Elmore Leonard novel.

Here the bizarre highlights of the Rolling Stone story, which is definitely worth the read:

1. That it happened at all. That week last September, Manhattan was lousy with security — the U.N. General Assembly was in session, the Pope had just blown through town and Mexico’s own president Enrique Peña Nieto is in the same hotel where Sean Penn and his buddy, a man known only as Espinoza (“Espinoza is the owl who flies among falcons,” whatever that means), hatch their plan to connect with a contact who will set up the meeting. An operation like this requires burner phones, codes, encryption — a self-described “clandestine horror show for the single most technologically illiterate man left standing.” Sean Penn doesn’t know how laptops work. (“Do they still make laptops? No fucking idea!”) He’s like Walter White in the first season of “Breaking Bad” but with less education. How does an actor manage to score an interview with a fugitive cartel leader in the first place? A Mexican soap star with a flair for Twitter dramatics — whom El Chapo, a fan, has entrusted to see his story brought to Hollywood — helped broker the deal, of course. (There’s a product placement for the tequila she’s marketing about a quarter of the way into the story.)

2. The incredible details of El Chapo’s escape. If you haven’t been following the story, this was no “Shawshank Redemption” hand-scraped escape tunnel. Using the same ingenuity that led to the creation and use of underground smuggling tunnels between Tijuana and San Diego, El Chapo’s engineers designed and executed a complex subterranean scheme worthy of a Bond villain — the Big Dig of prison escape tunnels. As Penn writes: “A tunnel equipped with a pipe-track-guided motorcycle with an engine modified to function in the minimally oxygenized space, allowing El Chapo to drop through a hole in his cell's shower floor, into its saddle and ride to freedom.”

3. The meeting. After two plane rides and a high-speed drive through the jungle show just a glimpse of how El Chapo’s outfit eludes the authorities. Examples: “they have an inside man who provides notification when the military's high-altitude surveillance plane has been deployed” and a military checkpoint diffused by the mere appearance of the face of an El Chapo son: “Alfredo lowers his passenger window; the soldiers back away, looking embarrassed, and wave us through.” When they finally arrive at the isolated hideout, there’s El Chapo himself, resplendent in a patterned silk shirt, amused to discover Sean Penn doesn’t speak very good Spanish. They all sit down and eat tacos, and agree to meet again in eight days for the real interview — but one of El Chapo’s men’s cell phones was tracked, and a days-long military siege ensued after Penn's team leaves. The meeting eight days later doesn’t happen. Everything is compromised.

4. The alternate plan. Penn learns that the DEA had been aware of his first trip, so returning to Mexico by traditional routes is a no-go. He hatches a new plan that involves stuffing himself inside a car trunk to a waiting rental car, then driving that to Arizona to cross the border, but Kate, the Mexican soap star, wants to go with him. They settle on a safer bet — Kate would transmit Penn’s questions to El Chapo through BlackBerry Messenger (!) and El Chapo would videotape his responses. This leads to a (rather ironic for someone who doesn’t understand laptops, Sean Penn) lengthy frustration with El Chapo’s communications and technological savvy:

"Kate, let me get this straight. The guy runs a multibillion-dollar business with a network of at least 50 countries, and there's not one fucker down there in the jungle with him who speaks a word of friggin' English? Now tonight, you're telling me his BBM went on the blink, that he's got hardly any access to a goddamn computer?! Are you saying he doesn't have the technical capability to make a self-video and smuggle it into the United States?"

5. The long-awaited interview itself. After all of that, the taped answers themselves, which came in before El Chapo was re-apprehended late last week, are brief, to the point, and fairly benign. They reveal less about the man than Penn’s experience in the jungle did. El Chapo sees himself as a businessman, as someone who took advantage of the only opportunities he had to support himself and his family, and his place in the drug business as ultimately replaceable—the demand will always be there, and so will the supply.