Flaunting our ignorance: We're looking at you, GOP candidates 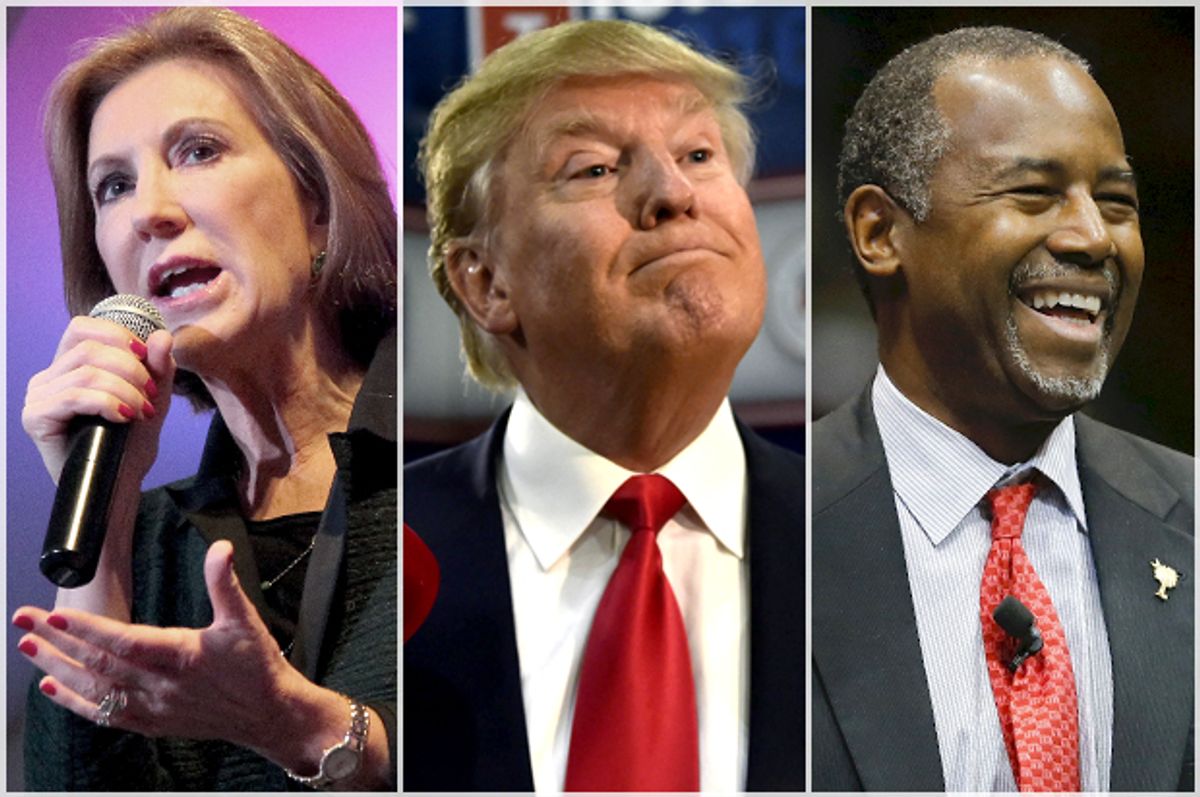 “When did ignorance become a point of view?” the cartoon character Dilbert once asked.  It’s a question that has become increasingly resonant these days—especially in our public life, and especially in our political campaigns in which elected officials and those who seek election seem to assume a startling level of public ignorance. Perhaps that’s smart.

Ignorance is thriving. Despite the democratization of education; despite new tools for learning and great advances in knowledge; despite breathtaking increases in our ability to store, access and share a superabundance of information—ignorance flourishes.

I am not speaking of the vast surround of ignorance that is part of the human condition, against which we struggle through assiduous research, patient learning and happy discovery. I refer to public ignorance, by which I mean widespread, reprehensible ignorance of matters that are significant for our lives together. Such ignorance is removable, but the irony is that much of it we ourselves construct and sustain. Much of it is motivated, willful, often bolstered by false knowledge, and anchored by prejudice, privilege and ideology.

Take political ignorance and the issue of Syrian refugees entering the U.S. Presidential candidates Ben Carson and Carly Fiorina claimed President Obama has ordered the acceptance of 100,000 to 200,000 refugees, while another candidate Trumped that by claiming the president wants to take in 250,000. Setting the refugee limit is required by law and is not done by executive order. More important, Obama has authorized only 10,000 refugees from Syria in 2016. The 100,000 figure apparently comes from Secretary Kerry’s speculation that the limit on refugees from all places could be raised to 100,000 in 2017—an increase of 15,000–25,000.  (I should note that roughly half of the Syrian refugees accepted to date are children.)

On climate change, Obama’s birthplace and religion, the Iran Anti-Nuclear Agreement, healthcare and so many other topics, candidates have made patently false or inflated statements that simply stoke the snarky and bigoted world of comments on social media. Awarding a record number of “Pinocchios” for these false claims is a just response—but it isn’t enough to stop the infusion of ignorance and the hysteria it feeds. Even those who want to know the truth become confused.

Public ignorance is broader than the political: It embraces the historical, geographical, cultural, linguistic, scientific, quantitative, economic, aesthetic and religious—indeed, the whole range of knowledge one needs to understand the world.  Public ignorance in the U.S. (and we are not alone) is now so severe that the democratic ideal of an informed citizenry seems quaint. Some argue that certain industries and many politicians prefer an ignorant public.

When a legislator proposed that Vermont adopt a state motto in Latin, the blog responders displayed their ignorance: “No way! This is America, not Mexico or Latin America. And they need to learn our language…” When combined with prejudice and arrogance like this, ignorance can be horrific: I think of the hundreds of cases of violence against Sikhs, including multiple murders, by Americans who mistake Sikhs for Muslims.

When the conflict in Ukraine was at its hottest, a respected survey asked Americans to locate the country on a map. On average, the responses were off by more than 1,800 miles, with some placing Ukraine in Africa, Latin America or Canada! Of even greater concern: The further off from its actual location a respondent was, the more likely that person was to advocate U.S. intervention. It’s very dangerous when the less we know, the more we want to act on that ignorance.

We have now developed a culture in which ignorance is celebrated, perversely flaunted as a badge of pride. This is not good ole American anti-intellectualism. It’s deeper than that.  It involves not only the distrust of expertise and mainstream sources of information, but also the rejection of rationally relevant factors for adopting beliefs. It seems to abandon hard-won standards of knowledge and institutions like science that have served us since the Enlightenment and brought us the standard of living we enjoy today. Evidence and conclusions are accepted selectively or resisted stubbornly. Some adopt ridiculous conspiracy theories, believing they have the “real truth”—but this is false knowledge, ignorance in elaborate disguise.

As a nation, we have to spend too much time and energy battling ignorance: “Vaccinations cause autism.” “The earth is 4004 years old and Neanderthals roamed with dinosaurs.” “The wild winter in my state disproves global warming.” “The Constitution states that the first language of the United States is English.” Spouting such ignorance should be shameful.

In cases like these, it is hard to separate ignorance from stupidity, though their meanings are quite distinct. Ignorance is, in common usage, a lack of knowledge. Stupidity is a mental dullness that indicates an inability to learn or a lack of interest in learning. One can be ignorant without being stupid, though stupidity is sure to produce ignorance across an impressive front. Although stupidity surely contributes to our culture of ignorance, it is cheaply reductionist and unfairly dismissive to make rife stupidity the single, simple explanation.

Social critics have suggested many different factors that might have precipitated this culture: religious fundamentalism; the postmodern assault on ideals like truth and reason; corruption of pure science by “sponsored” research and profit motives; the conflation of news and entertainment; the media’s faulty vision of what “balanced” coverage requires; “the silence of the rational center,” and the seduction of virtual reality.

There is yet another enabling factor: today’s technology enables us to live within our preferences: we can create a cozy informational cocoon in which we only experience familiar things that reinforce our preconceptions. Whatever its causes, the culture of ignorance reflects the elevation of will over reason, the loss of a credible concept of objective truth, and a radical change in the connection between knowledge and democracy. Who weeps for the truth?

To be sure, those flaunting ignorance would deny that ignorance is involved. They assert a vacuous “right to believe”—though they seldom acknowledge epistemic responsibility. Secure in the certainty of their ideological commitments, they do not entertain the possibility of error.  Fear of what one might learn can be powerful, and it is reinforced by fear-mongering politics.

Recognizing one’s own ignorance—the only wisdom Socrates claimed—is the first and fundamental step to an open mind.  Acknowledging our ignorance is cognitively healthy: It prepares us for learning, imparts intellectual humility, directs our curiosity, and takes us into the real world.  The next step—as for Socrates—is to pursue the truth passionately. But that takes intellectual courage. Finding the truth is often difficult; accepting the truth may be more difficult.

Respect for persons does not require respect for the ignorance of those who should know better. We must call out those who lob falsehood and hate from their gated communities of willful ignorance. The most important task of education today is to find uncoercive but effective ways of melting such ignorance and instilling a communal form of critical thinking, because the greatest, most deeply embedded threat to our democracy is our own ignorance.

Daniel R. DeNicola is professor of philosophy at Gettysburg College and the author of "Learning to Flourish: A Philosophical Exploration of Liberal Education." He is currently completing a book on ignorance.