Doing the Golden Globes math: Maybe there's no "last f**kable day" for TV actresses — but film is a different story 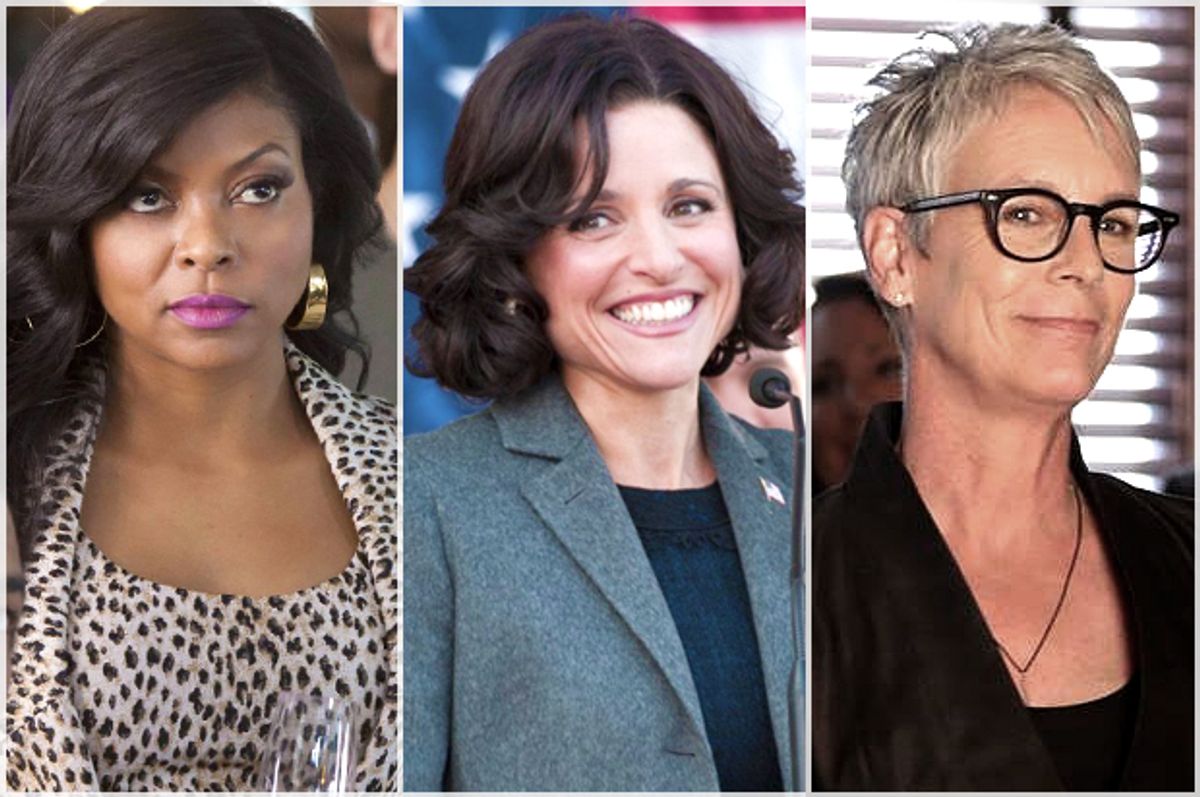 I can think of no better confirmation of “Inside Amy Schumer’s" brilliant bit “Last Fuckable Day” than the news item, earlier this week, reporting that Oscar front-runner Leonardo DiCaprio only dates women between the ages of 20 and 25. Looking over his catalogued relationship history, you can see how there’s a point up to which it made perfect sense that all of DiCaprio’s partners were in their early 20s (and blond, and supermodels, but OK)—he was of a similar age, and a handsome young man in Hollywood, and life is only so short, after all. But then DiCaprio ages out of his early 30s, but the women stay the same age, and it just keeps going, and going, until Slate notices and writes a piece about it. But as weird as it feels, from the outside, this is Hollywood—where, over the course of a few years, 1990-born Jennifer Lawrence played opposite romantic leads Bradley Cooper (1975), Christian Bale (1974), and Édgar Ramírez (1977).

In the “Inside Amy Schumer” sketch, Schumer (34) runs into Tina Fey (45), Patricia Arquette (47), and Julia Louis-Dreyfus (54). The three are celebrating Louis-Dreyus’ “last fuckable day,” the day where the entertainment industry no longer deems a woman fit for romantic interest opposite a man. As the three older women patiently explain to Schumer, there is no equivalent for men, even when they’re “like a hundred, and only white spiders coming out.” But unsaid in the sketch is that while the women are talking about Hollywood as a whole, they are specifically talking about film, in opposition to television, the medium they’re currently on.

Arquette, who had just won an Academy Award for “Boyhood” and devoted her onstage speech to sexism in Hollywood—after an Oscar campaign where an insider speaking to the Hollywood Reporter confessed to voting for her because she pledged not to have plastic surgery for the 12 years the movie was filming—spent the years between 2005 and 2011 paying the bills with “Medium,” an NBC drama where she played a psychic. Julia Louis-Dreyfus has just been in a handful of films, but has won six Emmys over 20 years for her television roles, and currently is the lead on one of HBO’s most acclaimed comedies. And though Tina Fey has become a film actress on other people’s projects, with lightweight comedies like “Sisters,” “Baby Mama” and “Date Night,” she is in charge on television, as a writer and showrunner—first with “Saturday Night Live” and “30 Rock,” and now with “Unbreakable Kimmy Schmidt.” There is a difference between the “rules” for women in film and women in TV.

This year’s Golden Globes—our annual chance to look at both television and film accolades side by side—put that on incredible display. We know that one of the reasons television has drawn very talented mid-career actresses is because they were able to find employment there, when they couldn’t in film. What is perhaps more surprising is that nearly a decade after the mid-aughts, when film actresses like Arquette, Kyra Sedgwick, Helen Mirren and more found a place on television after aging out of Hollywood’s romantic-lead standards, the age gap between Hollywood’s men and women in film—and between women in film and women in television—is still astonishingly wide.

And this brings me back to Leonardo DiCaprio. Nowhere is this age disparity more apparent, this year, than in the most prestigious category of the Golden Globes—motion picture, drama. The median age of the nominees for best actor is 41, with DiCaprio, who is nominated for “The Revenant.” The median age for the best actress nominees? Twenty-seven, with Alicia Vikander, for “The Danish Girl.” Saoirse Ronan is just 20; Brie Larson is 26. The next oldest is Rooney Mara, at 30. Cate Blanchett has proven to be a rare gem of a performer, both with her on-screen work like “Carol” and her off-screen glamour. But her greatest feat yet might be making it to the best actress nominees this year at the apparent ripe old age of 46.

If there’s one glaring takeaway from this rudimentary data set, it’s that where film displays a massive gender disparity in age, television is meanwhile neck-and-neck. Furthermore, in film, the male actors hit about the same age range in each category (drama, comedy, supporting, and even TV’s miniseries/movie category). But the women get progressively older, the less traditionally prestigious the category is. So best actress, drama skews youngest; then best actress, comedy; then supporting actress.

Meanwhile, in television’s best actor and best actress, the median age for women is higher than the corresponding male category. The only category in which this isn’t true is with the nominations for limited series/miniseries/TV movie. But given that those productions often pull directly from currently working film talent, à la “True Detective” and “Fargo,” you could lump that category in with the film trends. But we won’t, for another reason: Though Kirsten Dunst is just 33, she’s a veteran 33—she’s been in show business for the last 20 years. She is not middle-aged, but her career is; and it’s in that mid-career state, maybe 15 or 20 years in, when women disappear from film.

In the spread for this year’s nominations, it’s more difficult to find a woman in her 50s recognized for film than it is to find a septua- or octogenarian. Jennifer Jason Leigh (53) is nominated along with Maggie Smith (81), Lily Tomlin (76), Jane Fonda (78) and Helen Mirren (70). It’s almost as if, post-ingenue phase (around 30), women don’t come back as serious contenders in film until they’re late in their career and doing a kind of victory lap, save for a few particularly impressive individuals who either are British-accented magical fairies (Blanchett and Kate Winslet, 40) or very good comedians (Melissa McCarthy, 45, and Schumer—who, incidentally, both came up in television first).

There are, of course, a lot of other factors to potentially discuss—such as the fact that this is just the crop of films that were produced this year, and that several nominees do a lot of work in both mediums. Lily Tomlin, for example, is nominated for “Grace and Frankie” and “Grandma”; Schumer is nominated for her film “Trainwreck” but not for “Inside Amy Schumer.” This is where the data is most muddled; actresses like Tomlin, Schumer and Dame Maggie Smith might be nominated for films but are making the bulk of their financial obligations through TV money—or vice versa. Similarly, these performers could be leveraging their success in one medium toward success in another.

And of course, there’s the perennial issue that the Golden Globes are actually just the result of public relations bribery, i.e., of Hollywood campaign spending run amok. These nominations are likely illustrative of nothing more than which actresses' studios are willing to spend a ton of money promoting to get votes from the Hollywood Foreign Press—but then again, that is in its own way a very telling metric of the industry’s perception of these women.

Ultimately, the thing to look for in tonight’s broadcast is not any particular age when the nominees take to the red carpet or the winners walk the stage, but rather, how the female employees of Hollywood are able to construct a career out of the opportunities they have. Perhaps we are in an equilibrium where young and talented actresses start in film, move to television, and then do both at the end of their career. And perhaps we have a situation where female performers are still struggling to be even seen after their “last fuckable day,” let alone recognized for their work. Yes, the median age for the five actresses nominated for best actress in a dramatic motion picture is 27. But given that apparently only one is young enough to date Leonardo DiCaprio, my suspicion is that the situation is a bit closer to the latter.